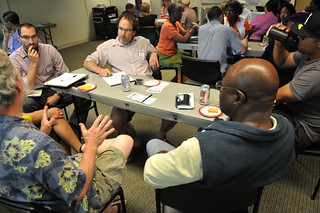 New research delves into the Williams
project process and why it turned into such a controversy.
(Photo © J. Maus/BikePortland)

It’s been over two years now since the issue of racism and gentrification became part of PBOT’s North Williams Avenue traffic safety project. As the public process for that project morphed into a citywide dialogue about these volatile topics, the project transcended PBOT and became a case study that has been investigated, analyzed, and debated by people all over the country.

Now the work of two Portland State University professors has been published in the peer-reviewed academic journal, Environmental Justice. The article, Contesting Sustainability: Bikes, Race, and Politics in Portlandia, (published in the August 2013 issue) was written by Dr. Amy Lubitow, an assistant professor in the Department of Sociology at Portland State University and Dr. Thaddeus Miller, an assistant professor at the Nohad A. Toulan School of Urban Studies and Planning, College of Urban and Public Affairs, at PSU. 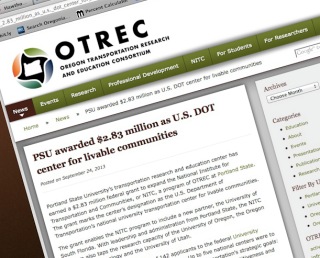 The Oregon Transportation Research and Education Consortium (OTREC) at Portland State University continued to raise its national profile with today’s announcement of a $2.83 million grant from the U.S. Department of Transportation. This grant comes on the heels of a $3.5 million federal grant awarded in January 2012 that solidified PSU’s role as one of the premier university transportation centers (UTCs) in the country. The competition for this grant was very stiff with 142 universities vying for just 32 grants.

With this latest grant, OTREC at PSU is now the USDOT’s go-to institution when it comes to “livable communities” research. For this round of grants, the USDOT awarded just five national university transportation centers. Each center was pegged to focus its research on one of the agency’s five categories: economic competitiveness, environmental sustainability, safety, state of good repair, and livable communities. 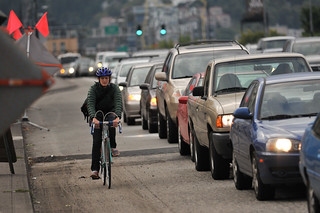 Newsflash: Cars are highly toxic
and bike riders suck it all in.
(Photo © J. Maus/BikePortland)

The Portland Tribune published an article yesterday with a scary headline: “Car exhaust proves unseen road hazard.” The story chronicled the efforts of transportation researcher Alex Bigazzi, who rides around Portland with special equipment attached to his bike in order to measure air quality.

Bigazzi is a doctoral student at Portland State University who’s no stranger to this topic. In 2010, we wrote about research he worked on that pointed to the air quality and health benefits of streets that have cycle paths separated from auto traffic. Bigazzi’s latest work, as highlighted in the Tribune, are sure to raise some eyebrows. Here’s one of the opening paragraphs:

“When it comes to cycle planning and policy, all parties involved (politicians, policy-makers, practitioners, advocates, etc) should remember that they are providing for “cycling”, not “cyclists””.
— Glen Koorey, University of Canterbury

Reader John Lieswyn (an associate at Alta Planning + Design) emailed me a link to an amazing bit of research this morning. A 2007 paper written by Glen Koorey, a transportation researcher based at the University of Canterbury titled, Are You a Cyclist or Do You Cycle? The Language of Promoting Cycling.

This 10-page paper (PDF) blows my mind, not because of the subject matter itself, but because Mr. Koorey explores a topic I have thought and spoken about for many years. It’s as if he crawled inside my brain and then reported back what he found.

From the online abstract, it appears Koorey presented the paper at a cycling conference in New Zealand. Here’s how he introduces the topic:

“Promoting more cycling in New Zealand is still an exercise fraught with much adversity, both from the general public and from decision- and policy-makers. It is therefore crucial that anyone advocating for a better cycling environment is careful in how they present their case, lest they end up “scoring an own goal” or furthering existing mis-conceptions.” 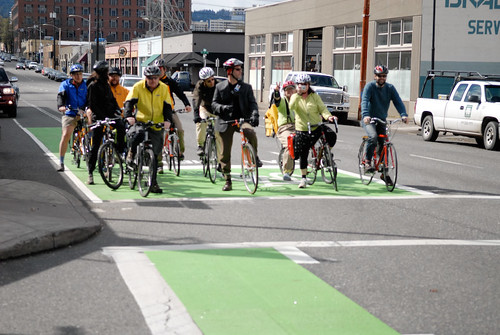 Wait up? Most people do.
(Photo © J. Maus/BikePortland)

We’ve all met that person who can’t seem to talk about bikes without complaining about “the cyclists” who are “always running” red lights.

Next time you cross paths with them, you might want to mention a new study suggesting that speeding in a car on local streets is at least six times more common than running a red light on a bike.

Nearly 94 percent of people riding bikes in Portland, Beaverton, Corvallis and Eugene stopped for red lights, a forthcoming Portland State University-based study of 2,026 intersection crossing videos has found. Of those, almost all (89 percent of the total) followed the rules perfectly, while another 4 percent entered the intersection just before the light changed to green.

Only 6 percent of riders were observed heading directly through the red light. 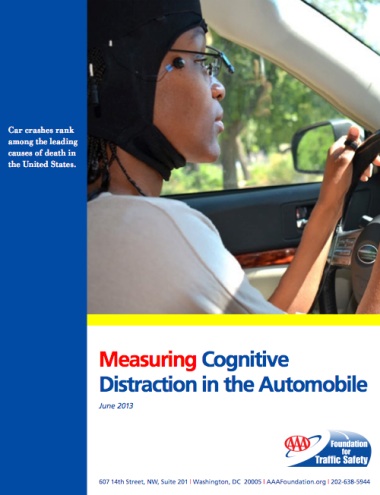 Cover of Measuring Cognitive Distraction in the Automobile,
a new report from AAA.

Yesterday the AAA Foundation for Traffic Safety dropped a bomb into the national debate about distracted driving. They conducted research and developed a report that shows “significant levels of cognitive distraction” by people who drive while performing various hands-free tasks. The report comes amid a growing trend in the auto-industry to turn cars into smartphones. In fact, on the same day this report came out, Apple made a big announcement about their new operating system, iOS in the Car, which promises to allow users to, “easily and safely make phone calls, access your music, send and receive messages, get directions and more.” 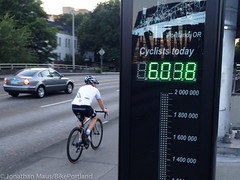 One of the recommendations
in the report is a 4% excise tax
on new bike sales that would fund
safety programs and more bike counters
throughout the city.
(Photo © J. Maus/BikePortland)

BikePortland has learned that the City Club of Portland will announce tomorrow that their membership has officially voted to support their research report on bicycling. No Turning Back: A City Club Report on Bicycle Transportation in Portland is an 83-page report that delves deeply into the bicycle issue in Portland and tackles everything from politics to projects and funding. The report was released on May 29th and some of City Club’s estimated 1,500 members voted on it in person at a “Friday Forum” event on June 7th.

However, this is the first report that City Club opened up to a new process of online voting. In February of this year, City Club’s Board of Governor’s voted to amend the organization’s bylaws to allow online voting as a way to increase the number of members who vote. Given that the report strongly endorses bicycling and calls on the city to do more to advance it, there was some nervousness among local advocates that the electronic vote might be close and/or even reject the research. 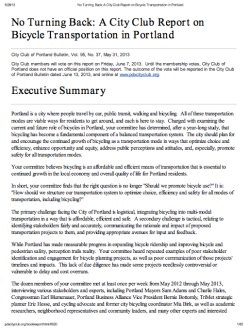 After a year of research, a 12-member committee of the Portland City Club released a report today titled, No Turning Back: A City Club Report on Bicycle Transportation in Portland. The 83-page report tackled nearly every major bicycling issue that Portland faces: From quantifying just how many people are riding, to making recommendations on how to raise money to pay for bike-specific infrastructure. They also looked into many of the negative narratives around bicycling to determine if they had any merit (spoiler alert: they don’t).

And, just as I suspected when I shared an update on this project earlier this month, the report is extremely favorable to bicycling. Here’s an excerpt from the Executive Summary: 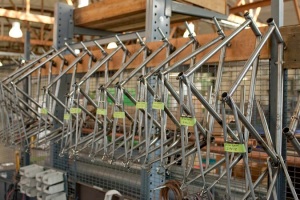 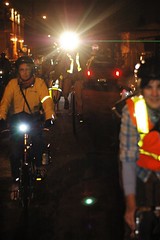 Not as flashy as most
people think.
(Photo © J. Maus/BikePortland)

People who ride bikes at night consistently overestimate their visibility to other road users, a new study has found.

They also overlook a few tricks, like reflective strips around the ankles and knees, that can help the most.

The report, led by Joanne Wood of the Queensland University of Technology in Australia and published in next month’s issue of Accident Analysis & Prevention, asked both regular and occasional bike riders wearing black clothing, fluorescent or reflective vests, and vests with reflective strips to estimate the point at which an approaching driver would be able to spot them. Different lighting setups were used, too.

People wearing black clothing on their bike at night, or just a reflective vest, were far too optimistic. They thought drivers would see them from nearly twice the distance drivers actually tend to. 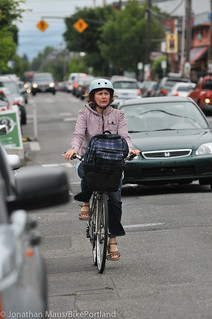 Could road rage tell us something
about the gender gap in bicycling?
(Photo © J. Maus/BikePortland)

Tara Goddard, a PhD candidate in Urban Studies at Portland State University (PSU), is devoting her thesis to a subject that gets a lot of traction in the media but so far has received scant attention in academia: road rage between people who drive and people who bike.

According to Goddard, her research will focus on the “interactions between drivers and bicyclists,” an aspect of “transportation psychology” research that is largely untapped (most major studies have focused on driver-to-driver rage). Goddard plans to delve into the mechanisms and predictors of driver-rider road rage. “For example, as drivers, we experience (and sometimes perpetrate) law-bending/breaking all the time,” she shared via email. “It is socially acceptable, in many ways. But any scofflaw behavior on the part of a bicyclist suddenly condemns the entire bicycling world.”

Why does that happen? Goddard has a few hunches: