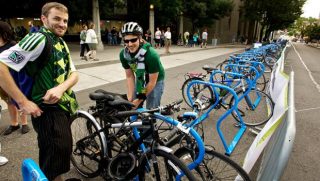 Yes, anyone coming to the game
can use the Timbers bike parking.
(Photo: Providence Park)

A Portland Timbers spokesman straightened out misconceptions about the soccer team’s rules for bike parking in an interview Friday.

Last week, a Timbers fan wrote us to report that he and his wife had biked to a game but been told by Providence Park staff that the big temporary bike racks were for Timbers season ticket holders only. He’d then asked several other attendees, who said they had the same impression.