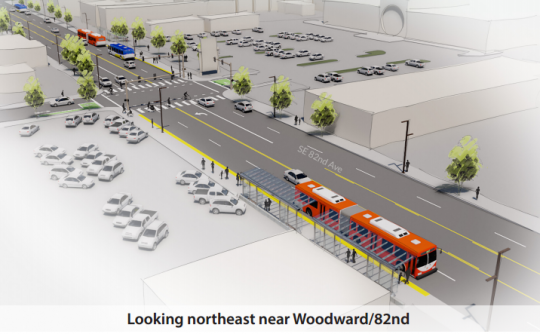 Until now, this has been seen as the preferred route for an express bus line.
(Map: Metro)

A $200 million project to improve bus service and change zoning through Southeast Portland and Gresham is in limbo after project managers realized that it wouldn’t actually make it faster to ride the bus. 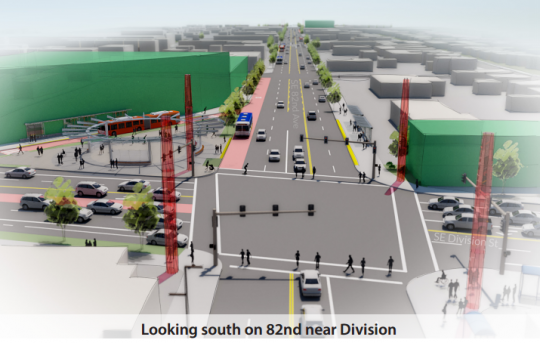 A draft rendering of one possible design for 82nd Avenue with one block of “business access transit” lane approaching the right turn onto Division. Cars could legally use BAT lanes only to turn into a driveway.
(Images via TriMet)

The Oregon Department of Transportation says it needs to preserve five auto lanes on 82nd so the dramatically increased number of cars that Metro expects on the street by the year 2035 will have somewhere to sit during rush hour.

The question seems odd. But as Metro and TriMet ask the region whether the new “bus rapid transit” line they’re planning should run on half a mile of 82nd Avenue, here’s part of the subtext: In order to get permission to run the bus line on 82nd Avenue, project planners have agreed not to aspire to do anything for biking, walking or transit on 82nd that might significantly reduce the number or capacity of cars there.

In fact, even if the highest-quality version of the project currently being considered were built, buses there are projected to travel slightly slower in 2035 than they do now. Rush-hour travel times would rise to about four to five minutes for the half-mile stretch, up from about three minutes during the afternoon peak today.

It’s not yet official which route the line will take between Powell and Division, but project staff are pushing hard for that because of all the destinations on 82nd.
(Map: Metro)

This is a small preview to a big story we’ve been working on about Metro’s next big Southeast Portland project: the Powell-Division bus rapid transit corridor.

“Bus rapid transit” is the neat, fast-spreading idea of making a bus line feel and function like a train line. Part of that is that instead of a stop every two or three blocks, the big new buses will have stations (don’t call them “stops”!) every six to 12 blocks.

That means it’s especially important to get the station locations right. An online survey open through the end of this week asks where the stations should land. 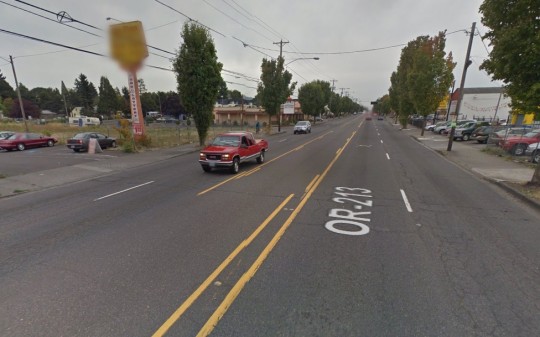 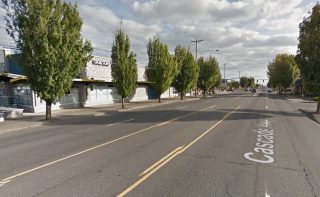 The street that once ran along part of Portland’s eastern border is now one of its most important corridors, and it’s lined up for some changes — which may even include a new bikeway.

On Saturday, Oct. 10, the 82nd Avenue Improvement Coalition will host a community forum about the urban highway’s future. It’s convened by the Asian-Pacific American Network of Oregon, the force behind an effort to keep strengthening the identity of the Jade District near 82nd and Division; by state Sen. Michael Dembrow, one of the forces behind an effort to bring 82nd Avenue from state to local control; and by the Portland Bureau of Planning and Sustainability, which is updating its zoning maps in ways that could push the street away from its current highway-on-the-edge-of-town atmosphere. 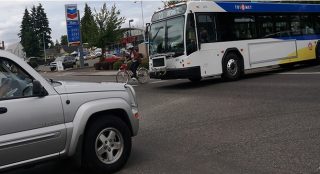 82nd Avenue is finally getting the attention is so badly deserves. The state-owned arterial is one of the City of Portland’s ten High Crash Corridors, a designation it has earned by being the place in Portland where you’re most likely to die or be seriously injured while walking.

The Oregon Department of Transportation announced today they’re seeking members for the Community Advisory Committee for their 82nd Avenue of Roses Implementation Plan. That effort will identify transportation projects along a seven-mile stretch of 82nd from NE Killingsworth to Johnson Creek Blvd. 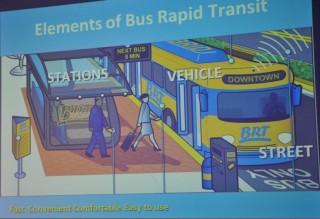 Room for bikes?
(Image: From a Metro slide presentation)

Only in Portland would a regional planning agency host a lunchtime event titled “Bus Rapid Transit 101” in a movie theater with free popcorn.

That was the setting yesterday for a meeting hosted by Metro to introduce Portlanders to their Powell-Division Transit Development Project. The planning effort is just getting started and the aim is to create the region’s first bus rapid transit (BRT) service on a 15-mile route along SE Powell and Division streets between Portland and Gresham.