With the city’s purchase of the US Post Office block (west end of Broadway Bridge), the potentials for better bikeway connections are obvious and vast. The Portland Development Commission is leading the redevelopment project and they need members for a steering committee. If you’re interested, check out the info below…

The Portland Development Commission (PDC) is seeking members for a Steering Committee to guide redevelopment of the Broadway Corridor.

Redevelopment of the Broadway Corridor is a once-in-a-generation opportunity to add to Portland’s economy and vitality and to deliver community benefits. The Corridor includes the 14-acre United States Postal Service distribution facility which will relocate next year, Union Station, and several other publicly owned properties. PDC is pursuing planning and redevelopment of the Broadway Corridor with an intentional focus on ensuring all communities have an opportunity to engage in and benefit from its redevelopment. As such, PDC is seeking a diverse mix of community leaders to serve on the Steering Committee and represent a broad range of topic areas. 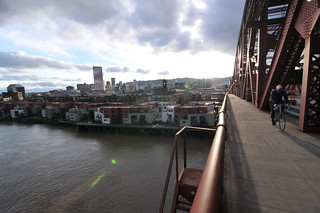 There’s a pot of gold at the west end of the Broadway
Bridge — for someone, at least.
(Photo: J.Maus/BikePortland)

It looks like inner Northwest Portland is about to get very, very different.

As various outlets have reported, the Portland Development Commission on Wednesday authorized the purchase of the downtown U.S. Postal Service headquarters for $88 million.

That means that if the city can clear up some remaining sticking points and find buyers, hundreds of daily truck trips will vanish from the Pearl District area; a major blue-collar downtown employer will probably relocate to a site near the airport, replaced by a mix of market-rate housing, office jobs and affordable housing; and the street grid between the north Pearl and Willamette River will connect for the first time in more than 50 years.

And as we reported in September, it’ll also mean three new or improved bikeway connections to the Broadway Bridge, including the promise of a route that winds straight down to the North Park Blocks.