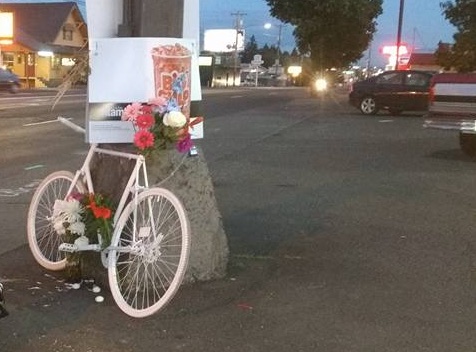 When big things happen, good or bad, many Portlanders turn to the community for support. And since cycling is such a powerful and common way to connect with other people and with the city around us — group rides become an organizing principle.

Whether it’s for a bike-related cause or not, Portlanders ride together as a way to process emotions, support each other, and inspire change.

This Saturday there are two rides that perfectly exemplify this phenomenon: the 82nd Avenue of Death Ride, and the Immigration Ride. 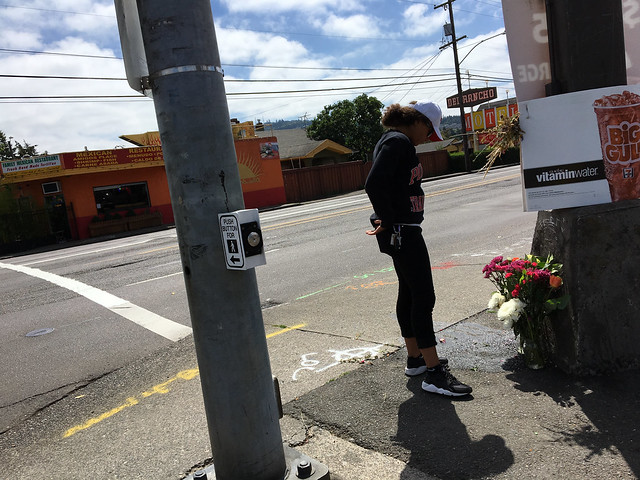 A friend of Lydia Johnson’s pays her respects at the corner of Flavel and 82nd in Southeast Portland.
(Photos: J. Maus/BikePortland)

I spent the morning at Southeast 82nd and Flavel, where just 48 hours earlier 25-year-old Lydia Johnson was killed in a traffic collision while riding her bike.

UPDATE, 9:45 am on August 1st: Police have identified the woman as 25-year-old Lydia Anne Johnson. See end of post for details on how the crash happened.

A woman died this morning as the result of a traffic collision in southeast Portland.

According to the Portland Police Bureau, it happened around 8:00 am this morning at the intersection of SE 82nd and Flavel.

Here’s a snip from the official police statement:

Officers and medical personnel arrived and located the adult female bicycle rider who was critically injured. Life-saving efforts were not successful and she died at the scene.

The adult male driver in a box truck remained at the scene and has been cooperating with investigators.