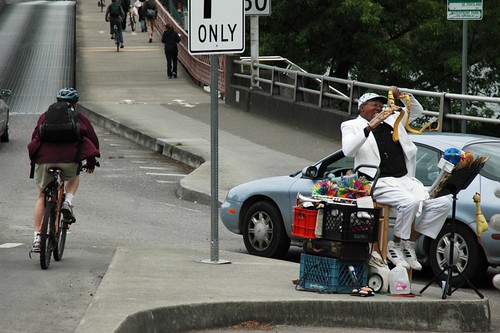 Kirk Reeves on the Hawthorne Bridge.
(Photos by J.Maus/BikePortland)

As we mentioned in this week’s Monday Roundup, the late trumpet performer Kirk Reeves was passed over by TriMet’s official bridge-naming committee, but not before getting 840 bits of love from people who suggested that the agency name their bridge for him.

Reeves connected with many people who crossed the nearby Hawthorne Bridge on bikes, and he’s one of several public suggestions for the bridge’s name that had links to local biking.

Here’s a look at a few of them, culled from TriMet’s news release of 9,000 public suggestions for the name of the bridge that will carry bikes, buses, MAX trains, streetcars, ambulances and people on foot:

Kirk Reeves, shown here at his usual spot on the Hawthorne Bridge in 2008, was impossible to miss.
(Photo © J. Maus/BikePortland)

This just in, following the sad news about Kirk Reeves yesterday…

The Oregon State Medical Examiner’s Office is asking for the public’s help in locating family for 56-year-old Kirk Forrest Reeves, who died over the weekend in Portland, Oregon.

Kirk was well known to many Portlanders from the white jacket and Mickey Mouse ears he wore as he played his trumpet at the West end of the Hawthorne Bridge. Kirk was also known to play music in Waterfront Park and Jamison Square.

Many Portland Police officers knew Kirk as he often had a wave and a smile for officers who saw him playing music.

It is believed that Kirk may have a sister in the Boston, Massachusetts area and cousins in Los Angeles, California, but the Medical Examiner is unable to locate any specific information to assist in notifying Kirk’s family.

The manner and cause of Kirk’s death is being withheld until family can be personally notified.

Reeves’ Oregon Drivers Licence photo is being released to assist in this case, but most know him by his white outfit, glasses and Mickey Mouse ears.

Anyone with information about Kirk’s family is asked to provide it to the Oregon State Medical Examiner’s Office, (971) 673-8220. 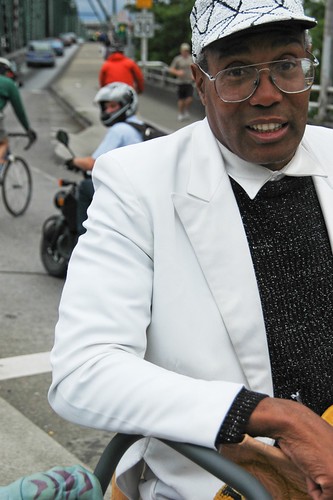 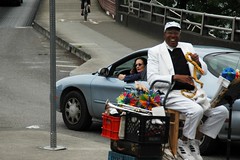 A street performer who plays trumpet and works the evening rush-hour commute crowd on the Hawthorne Bridge has drawn attention for something other than his talents.

In a white suit, shoes, and cap, the man performs gags and tricks and bellows tunes on his trumpet while seated on a median island positioned between SW Madison Street and an onramp to the bridge from Naito Parkway (map of location).