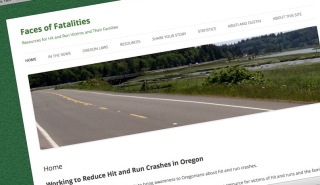 A bereaved mother whose 28-year-old son was killed by a drunk driver two years ago while biking on SE Division, has launched a website. Faces of Fatalities: Resources for Hit and Run Victims and Their Families is the work of Kristi Finney-Dunn. Since her son Dustin died in August 2011, Finney-Dunn has dedicated herself to public service and citizen activism and this website appears to be just her latest effort to spur the public dialogue around the scourge of dangerous driving and hit-and-run collisions. 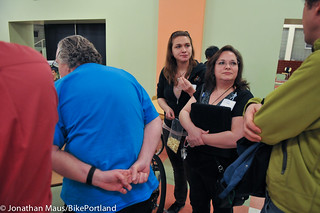 The mother of a young man killed by a drunk driver while bicycling on SE Division last year has become a dedicated traffic safety activist. Since the death of her son Dustin on August 12th, Kristi Finney has become a student of traffic safety policies and Oregon vehicle law and has devoted herself to civic engagement at every opportunity.

We got our first hint at Mrs. Finney’s composure and compassion when, at the sentencing hearing of 19-year-old Ashawntae Rosemon (the man who struck Dustin, and then fled the scene), she looked him in the eye and said: 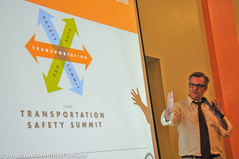 This is the sixth Transportation
Safety Summit that Mayor
Adams has presided over.
(Photos © J. Maus/BikePortland)

Mayor Sam Adams and PBOT held the sixth annual Transportation Safety Summit at Jefferson High School in North Portland last night. The event was created by Adams to accomplish several things: to convene the myriad organizations and agencies that work on safety issues; to glean the best ideas from the brightest advocates and citizen activists; to tout PBOT’s accomplishments; and to validate his belief that safety should be the #1 transportation priority.

Despite what seemed (at least to me) like a smaller and less enthusiastic crowd than last year (many of the 90 or so people in the crowd were agency/City staff and there were only a handful of citizens) — the night was a success on all those accounts. 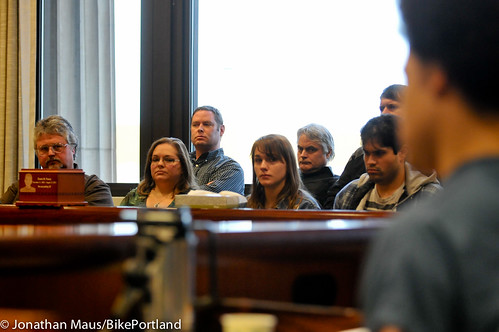 Dustin Finney’s mom, sister, and other family members and friends look at Ashawntae Rosemon, just prior to his guilty plea in a Multnomah County courtroom yesterday.

19-year old Ashawntae Rosemon was sentenced to 60 months in prison yesterday for causing the death of Dustin Finney. 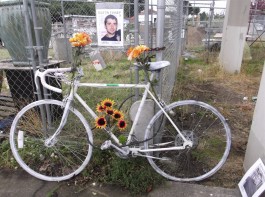 On August 12th, 28-year old Dustin Finney was riding his bike in the bike lane on SE Division Ave just past 85th when he was hit from behind by a teenager who was later arrested for reckless and drunk driving.

The impact killed Finney instantly. Now his family, still struggling to cope with this tragedy, is inviting the public to a memorial service in Dustin’s honor. The Memorial Celebration for Dustin Finney will be held at 7:00 pm on Friday, November 11th — which would have been his 29th birthday. 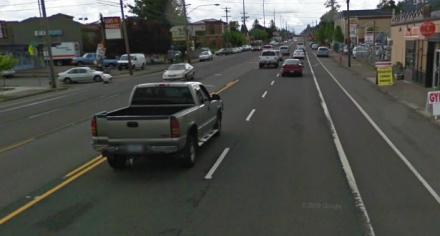 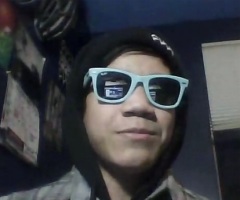 The two people on bikes involved in a fatal hit-and-run collision early this morning did not know each other. One of the two was 17-year old Portlander Kevin Phomma. Phomma was riding in front of the man who was killed, and, after the collision, he flagged down a passing Portland Police officer.

Phomma is an avid rider who is active on the PDXFixed online community, worked as an intern at 21st Avenue Bicycles, and is the youngest member of Team Trusty Switchblade.

Phomma left a comment on BikePortland about the collision a few minutes ago (emphasis mine): 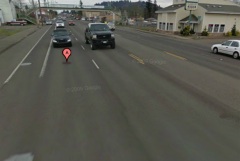 Intersection of SE 85th and Division.

One person died and another person was taken to the hospital suffered minor injuries after a hit-and-run in Southeast Portland early this morning. The Police say the collision happened around 1:00 am this morning on SE Division at 85th.

After arriving on the scene the officers discovered the suspect vehicle dumped at 92nd and Southeast Powell Boulevard. They are still searching for the suspect, whom they describe as a male, Hispanic 5’6 inches tall weighing about 160 pounds and may have been wearing a hat.