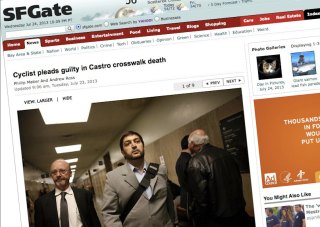 A man who killed a person on foot with his bicycle last year won’t serve any jail time in what’s thought to be “the first vehicular manslaughter conviction in the nation involving a bicyclist.”

Prosecutors said Chris Bucchere, 37, of San Francisco, ran “several red lights” and was moving at an estimated 30 mph when he lethally collided with Sutchi Hui, 71, in a crosswalk, as Slate and other outlets reported Tuesday. Hui survived for four days before dying. 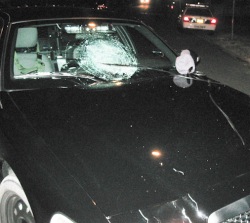 Damage to a Sheriff’s patrol car after it
was involved in a collision with another vehicle.
(Photos: Washington County Sheriff’s Office)

A collision in Aloha (about 11 miles west of downtown Portland) last night led to minor injuries and the arrest for 44-year-old Christopher Shostak. Shostak was operating his bicycle on a residential street when he became involved in a collision with a patrol car operated by a Washington County Sheriff’s Deputy.

According to the Sheriff’s Office, Shostak was bicycling eastbound on SW Blanton Road at 7:49 pm (about 30 minutes after sunset). The patrol car was headed in the opposite direction and then turned left into SW Pinewood Place. Here’s what the official police statement (titled, “Bicyclist Arrested After Crashing Into Patrol Car”) says happened next:

“It was reported that as the Sheriff’s Deputy was turning onto SW Pinewood Place, the bicyclist ran into the front of the patrol car.”