The City of Portland is working on a bike-sharing/rental system. The system will put card-activated rental bikes in kiosks downtown.

Read all our special coverage on this story below.

“This service outage is a good opportunity for leadership at Lyft to better articulate how their bike share systems plan to operate in emergency situations,”
— Tarani Duncan, bike share industry veteran

A man riding on the Broadway Bridge on September 10th.
(Photos: Jonathan Maus/BikePortland)

END_OF_DOCUMENT_TOKEN_TO_BE_REPLACED

Biketown 2.0 is here and the electric bike share era has begun 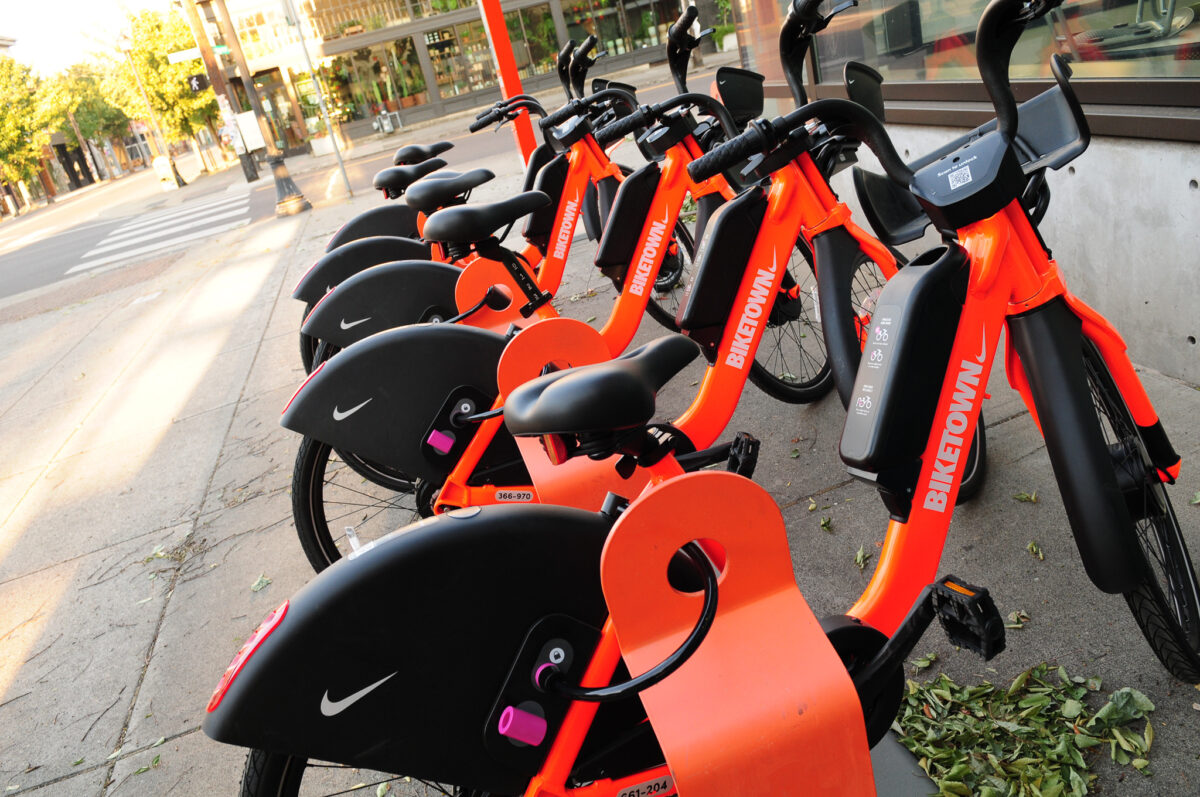 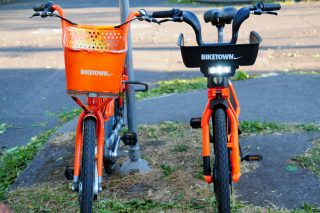 The Biketown app is now fully upgraded and 500 electric bikes are ready to be rented and currently spread over the expanded, 32 square-mile service area. And since Biketown’s operator Motivate Inc. is owned by ride-hailing juggernaut Lyft, the bikes can also be rented via the Lyft app (which also offers excellent public transit info).

I grabbed one of the new bikes from a station on Northeast Killingsworth this morning and gave it a test ride.

The first big upgrade I noticed was that the bikes no longer rely on a clunky, unreliable keypad. With the app open on my phone all I had to do was scan the QR code, answer a few quick questions, and the bike was mine. I also like the new locks much better. It’s a flexible cable instead of a hard metal u-lock.

How does it ride?

I’ve owned an e-bike for a while now, so the added boost wasn’t a major revelation. But boy-oh-boy the new Biketowns are so much easier to ride than the old ones! The 250 watt motor zipped me along effortlessly. I was able to ride 16-20 mph and felt confident merging with drivers and taking the full lane on residential streets. And I barely noticed the hills. I pedaled the uphill on SW Broadway from Burnside to Portland State University and easily hit all the green lights. No heavy breathing and no sweat. That’s what these bikes make possible.

I don’t think people realize how much it changes your perspective to ride with a motor. The balance of power on the street — especially with posted speeds of 25 mph or lower — almost levels out. Like it or not, American road culture equates might with right (of way). And motors give bicycle riders more might. This gives you a confidence and sense of safety that’s hard to explain until you’ve experienced it.

I also like how the new bikes are quieter than the old ones — even with the slight hum of the motor. This is because the new bikes are chain-driven instead of a shaft drive. One thing I didn’t like was how bumpy the ride was. PBOT has the large Schwalbe Marathon tires pumped way up to avoid flats and extend the time between air refills, but the downside of the high pressure is a jarring ride over any crack or bump.

Other minor changes with the new bike include a shallower step-through frame, a much more shallow front basket, and a full rear fender. I thought the old bikes looked pretty cool, but the new ones look even better. The design is minimal and everything is integrated and sturdy. I came across an old bike and snapped a few shots to help you compare side-by-side… 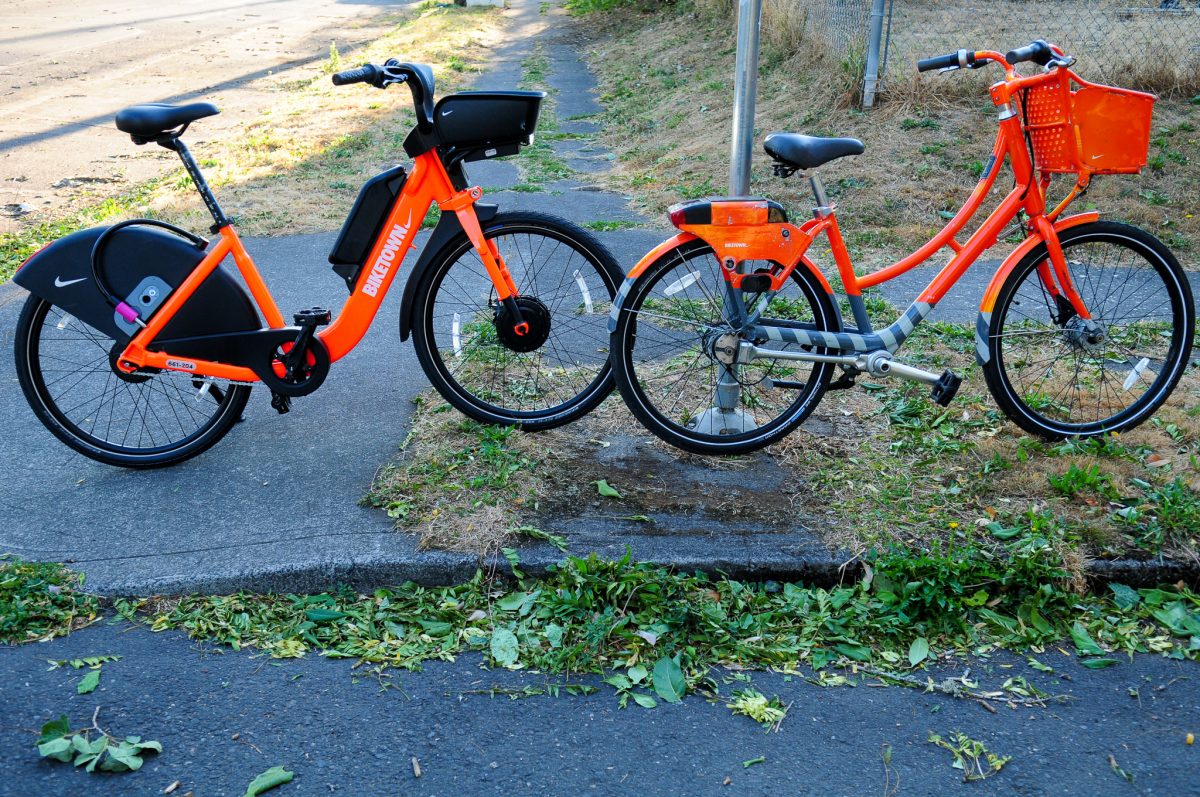 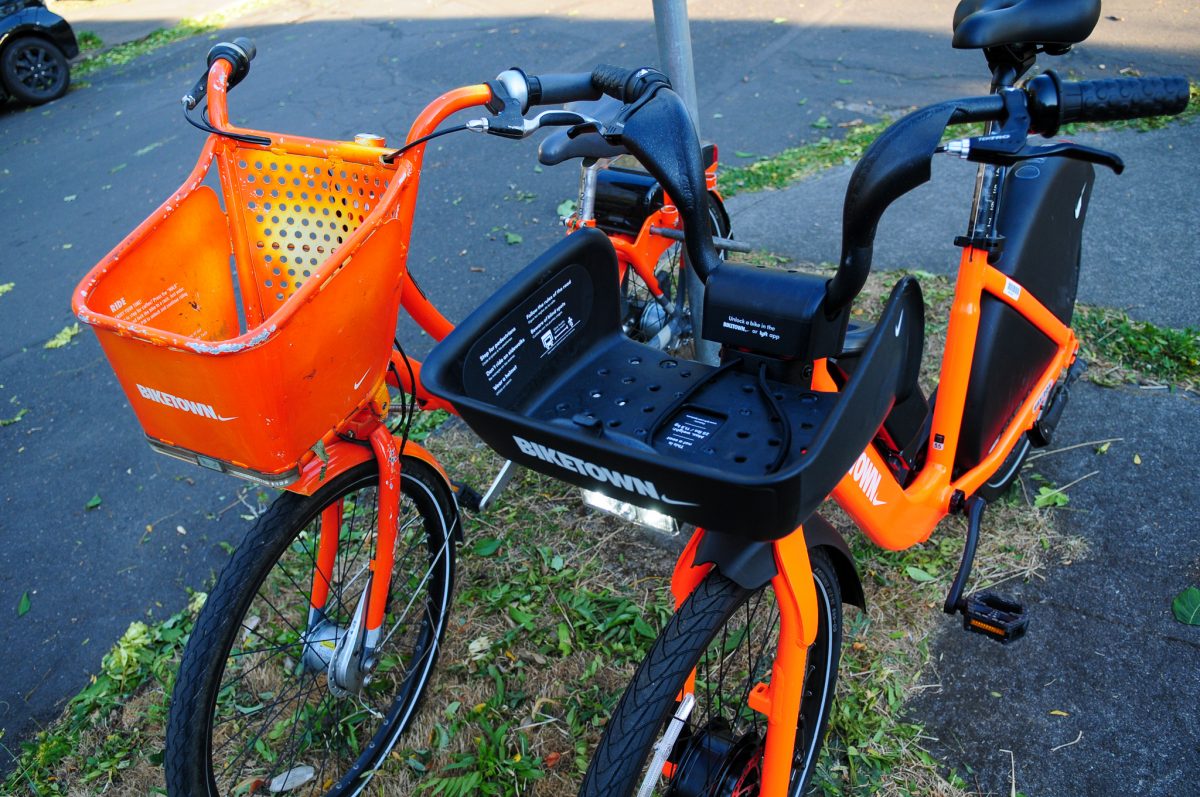 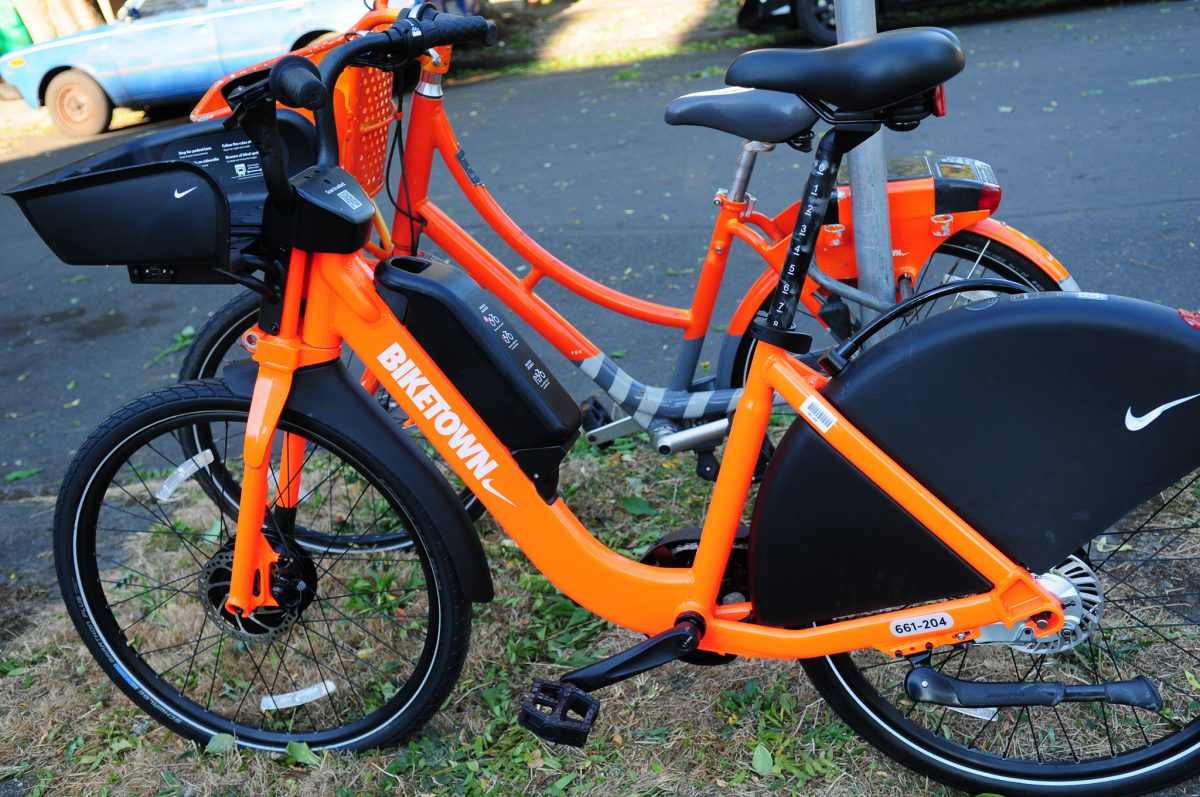 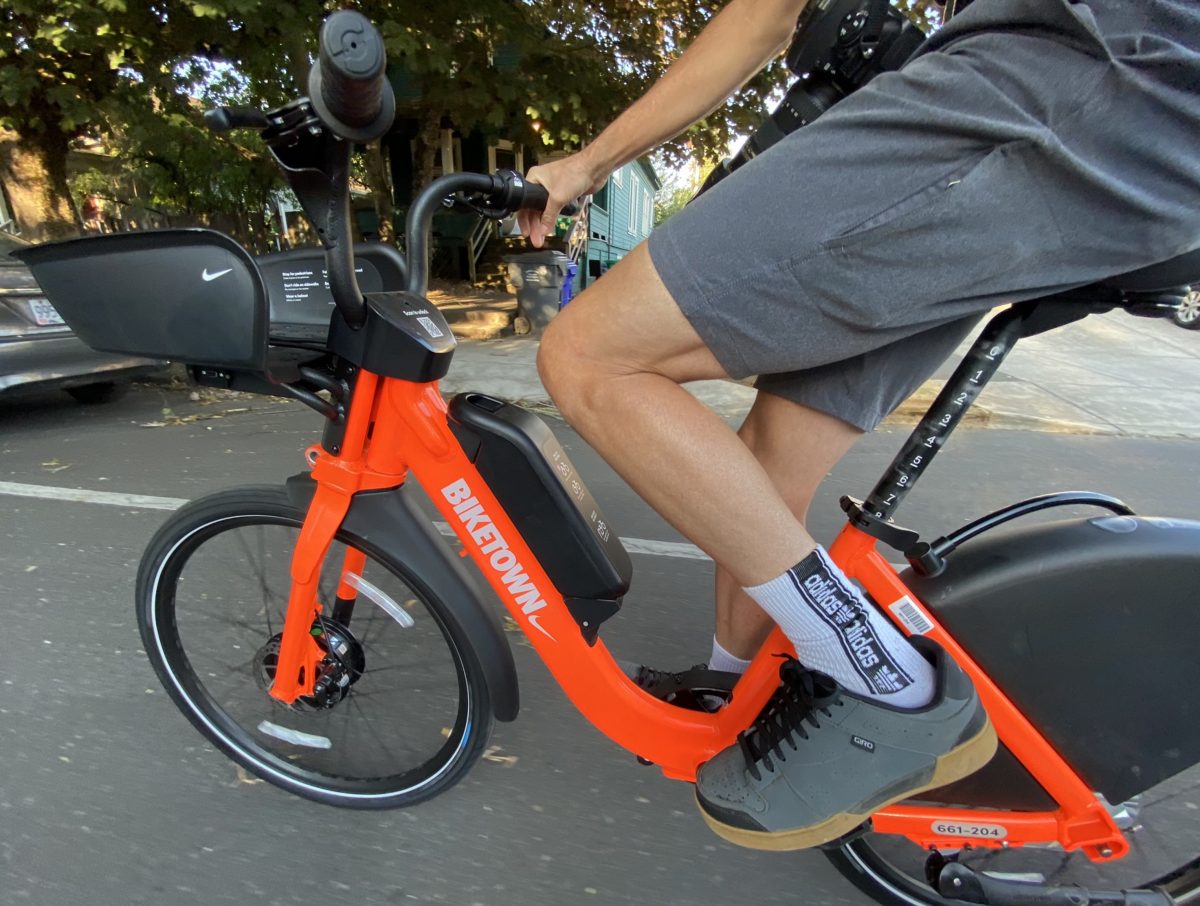 As I rode around I started to worry about the battery level and didn’t see any gauge on the bike to monitor it with. Then I discovered I could view the remaining estimated range of the battery just by pulling up the app. One of the things I’m curious about is how well crews are able to keep batteries charged at all times since I didn’t see any stations with built-in charging capability.

PBOT says they plan to add 1,000 more bikes to the fleet in the coming weeks. That will bring the total number of bikes to 1,500 — compared to the 1,000 we had with the old system. And by 2024 PBOT says we can expect 3,000 bikes in the system and a six square mile expansion of the service area.

As I reported back in July, the price of using this new system has gone up. I haven’t gotten an annual membership yet so I was on the “Single Ride” plan which charges $0.20 per minute plus a $1.00 “unlock fee”. This morning I had the bike out for 109 minutes and it cost me $22.80. Ouch! (Yes I realize the Single Ride plan is meant for quick trips, so it’s partly my fault.) The Annual Membership plan is $99 plus $0.10 per minute and gets you free unlocks. Sort of a bummer that there are no more free minutes; but PBOT says there was just no way to keep costs low while also upgrading the bikes and expanding the service area.

Have you tried out the new bikes yet? Please share your experiences with us.

The Portland Bureau of Transportation just made the official announcement and will host a press conference tomorrow in east Portland.

As we reported back in July this expansion comes with a host of changes — most notably a widely expanded service area, higher prices, and of course zippy new bikes that have been completely redesigned. END_OF_DOCUMENT_TOKEN_TO_BE_REPLACED

Biketown 2.0 will launch very soon: Here’s what you need to know

Caught a new Biketown bike in the wild riding around Mt. Tabor a few days ago.
(Photo: Jonathan Maus/BikePortland)

END_OF_DOCUMENT_TOKEN_TO_BE_REPLACED

New Biketown e-bikes will be nice, but at what price?

Biketown pricing has always been a sensitive subject.
(Photo by J. Maus/BikePortland from vandalism incident in April 2017).

END_OF_DOCUMENT_TOKEN_TO_BE_REPLACED

A Jump bicycle in Seattle.
(Photo: Seattle Department of Transportation)

Sources say the Portland Bureau of Transportation has ended bike share contract negotiations with Lyft and is now jumping on board with Uber.

PBOT sought bidders for a major bike share system expansion last fall and opted to stay with Lyft, the company that owns Biketown operator Motivate Inc. Portland’s current contract with Lyft ended in April and PBOT had been negotiating an extension of that agreement since December. As The Oregonian reported in January, the plan was to stay with Lyft and complete a seamless transition to a larger service area and launch an all-electric bike share fleet this summer.

That plan appears to have shifted.
END_OF_DOCUMENT_TOKEN_TO_BE_REPLACED

Portland has slashed the price of the Biketown bike share system

Cheaper than ever.
(Photo © J. Maus/BikePortland)

END_OF_DOCUMENT_TOKEN_TO_BE_REPLACED

Biketown use has declined 75% amid virus outbreak

END_OF_DOCUMENT_TOKEN_TO_BE_REPLACED

Oh the places they could go with an electric motor.
(Photo: J. Maus/BikePortland)

In news that won’t surprise anyone that’s been following along closely, the Portland Bureau of Transportation announced at a city council meeting yesterday that their planned bike share expansion will include electric bikes and cover more parts of the city.
END_OF_DOCUMENT_TOKEN_TO_BE_REPLACED