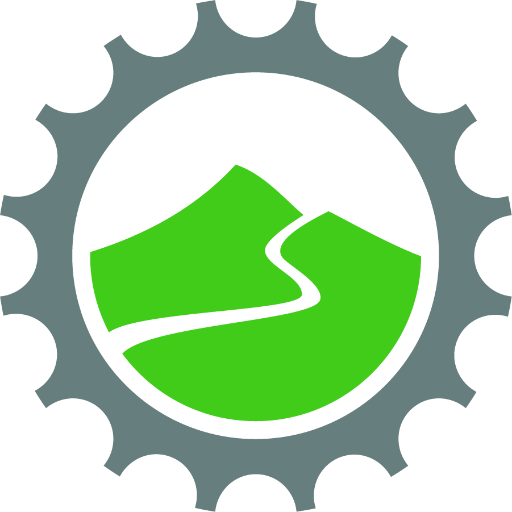 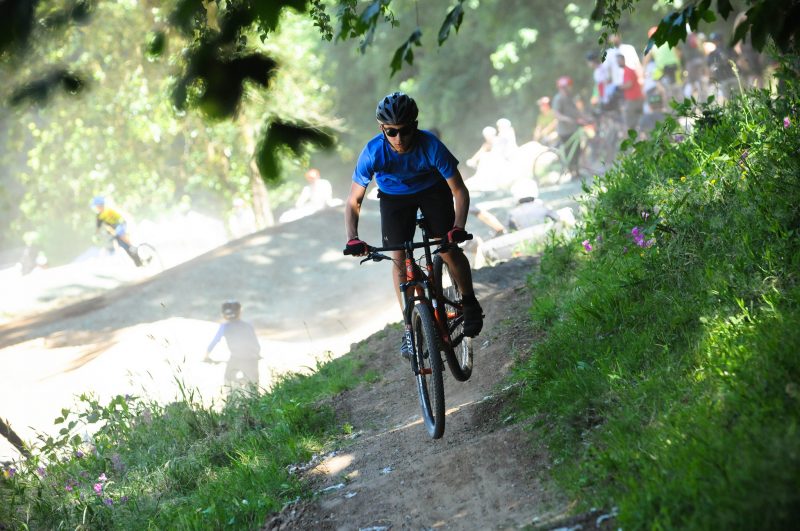 A rider finds the groove on a trail in Gateway Green, a signature project for Northwest Trail Alliance. (Photos: J. Maus/BikePortland)

[This is the second part of a two-part post from Northwest Trail Alliance President Chris Rotvik. Don’t miss Part 1, a recap of 2017.]

Almost 30 years ago, Theo Patterson spoke up to make sure mountain bikes weren’t banned from Forest Park. To help, Patterson founded Portland United Mountain Pedalers, or PUMP. In 2009, PUMP became Northwest Trail Alliance, and we turn 30 this year. With our Big Three-Oh looming, let’s glance back and gaze forward.

END_OF_DOCUMENT_TOKEN_TO_BE_REPLACED 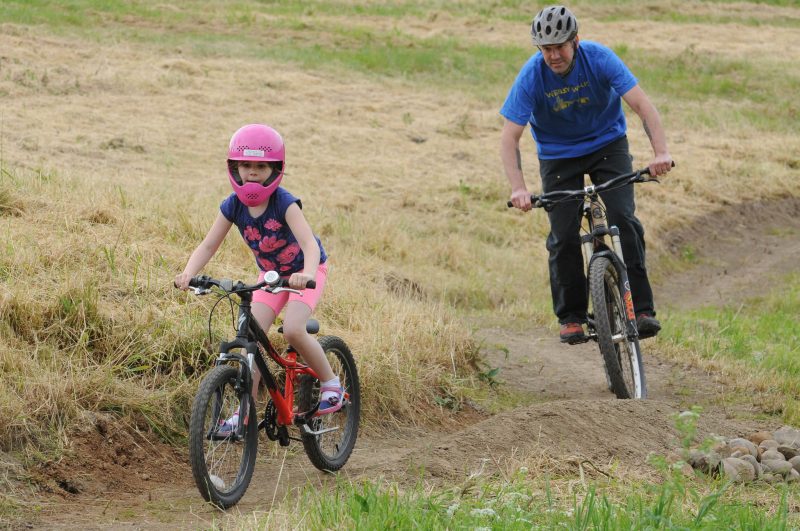 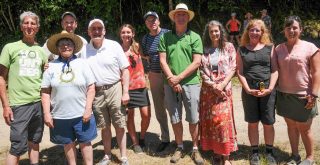 Standing with our partners (I’m on the left in green shirt) — including City Commissioners Amanda Fritz, Nick Fish, and Portland Parks Director Mike Abbaté — at opening day for the Dirt Lab at Gateway Green.

[We’re happy to publish a two-part article from Northwest Trail Alliance President Chris Rotvik. First, a recap of 2017. Then a look ahead to what’s in store this year.]

Throughout 2017, more than 1,700 mountain bikers — from shredders to striders — dropped in to Northwest Trail Alliance-hosted digging and riding events. And, all tolled, our volunteers carved a smidgen over 12,000 hours into our trails and the political arena that sustains the flow of riding in our region. Those hours equate to $360,000 of hard labor invested in elevating both our sport, and the tide on which our local cycling industry floats. Think of it as your membership and sponsorship currency, multiplied tenfold, and paid forward.

The urban scene captured the lion’s share of 2017’s effort. To date, we’ve brought forward more than 1,500 hours (and we’re not yet at the finish line) shaping Portland’s Off-Road Cycling Master Plan (ORCMP). Simultaneously, our expertise, labor, and equipment helped bring the Dirt Lab at Gateway Green — the prototype of how ORCMP will reshape our urban riding scene — to life.

Opened in late June, the Dirt Lab has reinvigorated riding and advocacy, and there’s much good yet to come of it— in Forest Park, River View Natural Area, Washington Park, and drizzled across the smaller parks in Portland. Icing that cake is our sweet partnership with Metro, who’ll soon be bringing delectable riding in the North Tualatin Mountains beyond Forest Park, in Oregon City, and in the Gabbert Buttes to the east of Portland.

So, after 30 years, the urban tide is turning. Are you out there, Theo Patterson? 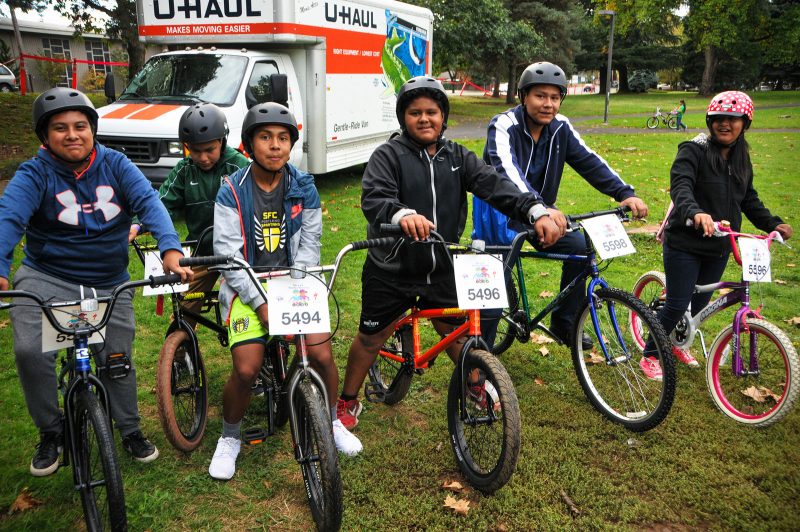 Let’s step from the urban scene to our front-country venues: First, we wrote Stub Stewart State Park the equivalent of a $60,000 check in the form of 2,500 volunteer hours, the highest across all our sites (Gateway Green and Growler’s Gulch ranked second and third at 1,800 and 1,600 hours, respectively). At Stub, we put paid to two new bridges, two new coach-ready, skill-building loops, a significant trail re-route, and two riding events. Next, the trail gnomes of Southwest Washington topped the mileage charts by adding — with their usual surgical precision — another five miles of new line to the fabled Growler’s Gulch system. (Digging is your ticket to entry, so if you’d like to ride Growler’s magic carpet, sign up for the work parties … find them on nw-trail.org.)

Elsewhere in the region, we buffed-out the trails. And buffed some more, for a total of 1,900 hours of wax on, wax off at Sandy Ridge, St. Helens, Coldwater Lake, Scappoose, Tillamook, Lacamas, Cascade Locks, Eichler, Powell Butte, Hagg Lake, and Whipple Creek. That’s the equivalent of re-shaping and brushing seven hours a day, five days a week, year-round. Mister Miyagi would be proud.

While 2017’s achievements just might be a high water mark for the organization, we’re already over it, aside from just one thing … our gratitude. If it weren’t for you — member, sponsor, volunteer — mountain biking in the region would be dirt poor. Thank you for all you do for our shared passion. 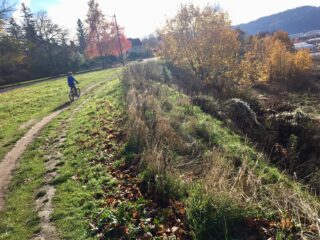 Where will we ride in the future? It’s time to weigh-in with your comments.
(Photos: J. Maus/BikePortland)

This post was written by the Northwest Trail Allliance, a Portland-based nonprofit and a BikePortland supporter.

Portland’s Off-road Cycling Master Plan (ORCMP) is now in its final stage of development, the Draft Plan Phase. The Bureau of Planning and Sustainability (BPS) is asking the public for feedback on the Draft, which will be incorporated into the Proposed Plan presented to City Council for adoption. As an off-road cyclist in Portland, this is an important opportunity for you to tell the City what you think about the Draft. If you want urban trails, now is the time to elevate your voice.

We encourage you to read the overview or full text of the Draft Plan and then submit your comments by December 31 via the ORCMP comment form, interactive map, or at the upcoming ORCMP open houses.

To assist, we’ve distilled the main elements of the Draft Plan as well as suggested areas of improvement that you may wish to include in your feedback to the City.

Key ORCMP Elements – By the Numbers

5.7 miles of natural surface, narrow to mid-width trails are currently open to cycling across the city.
END_OF_DOCUMENT_TOKEN_TO_BE_REPLACED 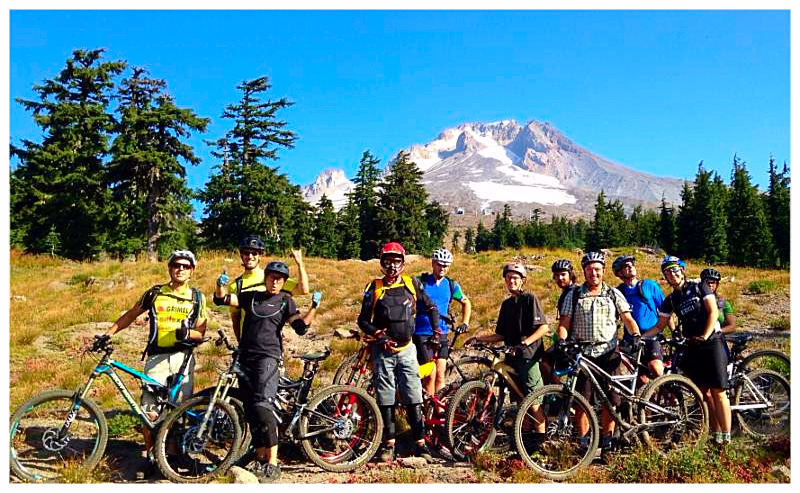 We love to ride… but that’s not all we do!

[Note: This post was submitted by BikePortland Business Subscriber Northwest Trail Alliance through our Subscriber Post system. We think it deserves a wider reach so we’ve posted it here on the Front Page. Remember, if you are a subscriber you can also be a contributor! We would love to amplify your voice and share your experiences with a wider audience. Sign up here. – Jonathan]

Hi! We’re new to the BikePortland community — and there’s a good chance the Northwest Trail Alliance is new to you — so we’d like to take a moment to introduce ourselves.
END_OF_DOCUMENT_TOKEN_TO_BE_REPLACED