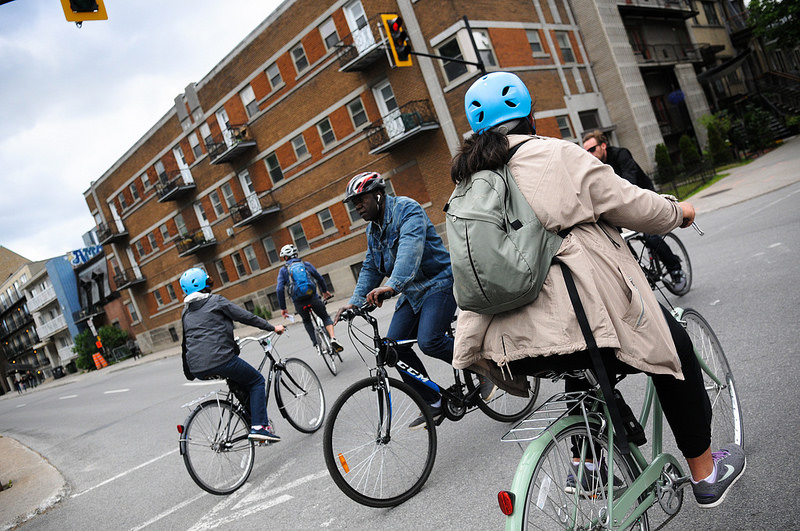 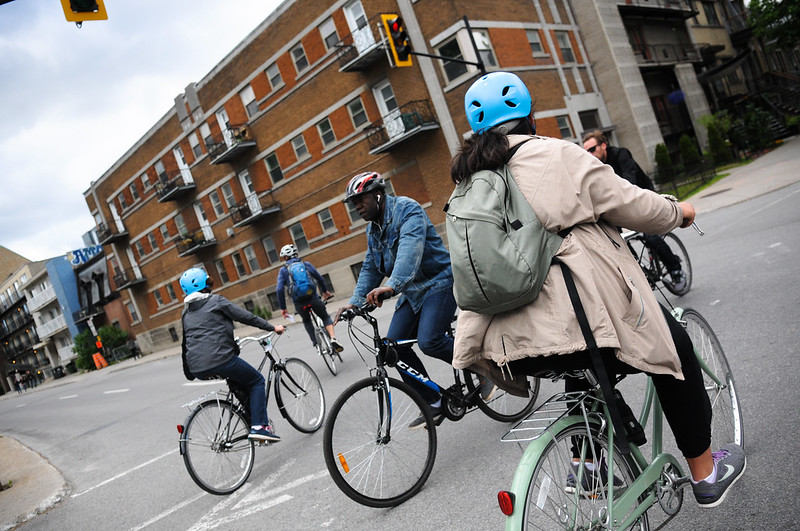 The bikeways in Montreal inspire people to give cycling a try; but it’s their proximity to ample and affordable residential housing that seals the deal.
(Photos: J. Maus/BikePortland)

When BikePortland reported last week that the city may slash its goal for increasing biking, the eighth paragraph contained a twist.

The obstacle to advancing our city to 25 percent of trips by bike by 2030 wasn’t actually the biking, city staff said. It was real estate. 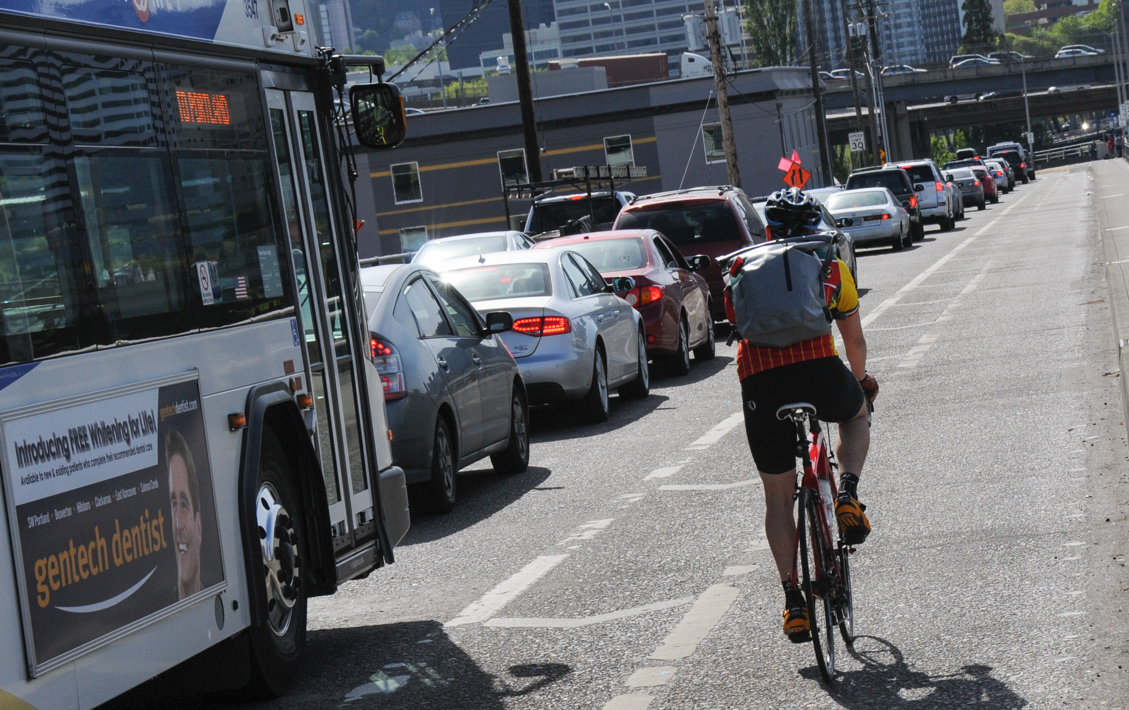 In 2009, the City of Portland set a goal that many people considered fanciful: one in four trips by bike citywide by 2030.

Eight years later, that’s exactly the ratio of car-owners in the Portland metro area who claim they’d swap their car trips for bike trips “if traffic congestion gets bad enough.”

That ratio held across racial and ideological lines, and was only slightly lower in Clark County, Wash., than on the Oregon side of the metro area. But it wasn’t consistent by gender, age, income or education: women, older people, higher-income people and more educated people were less likely to say they’d switch to biking. 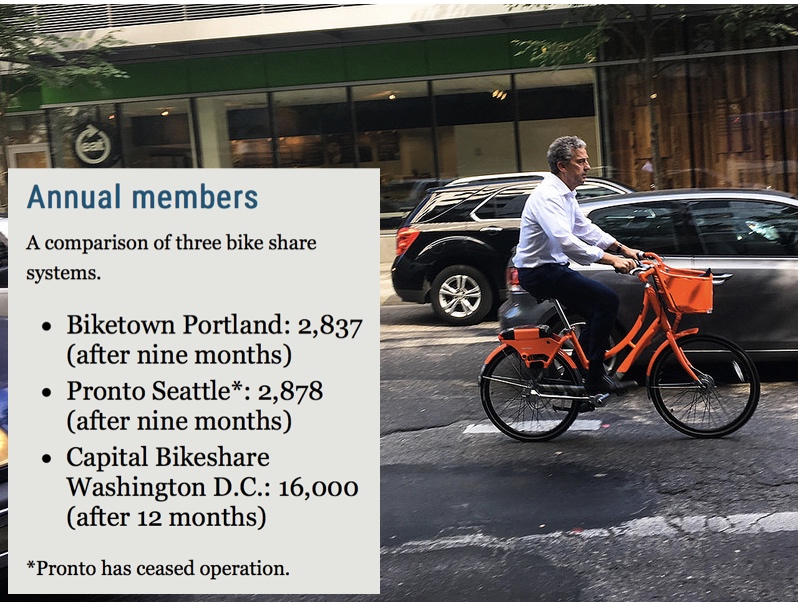 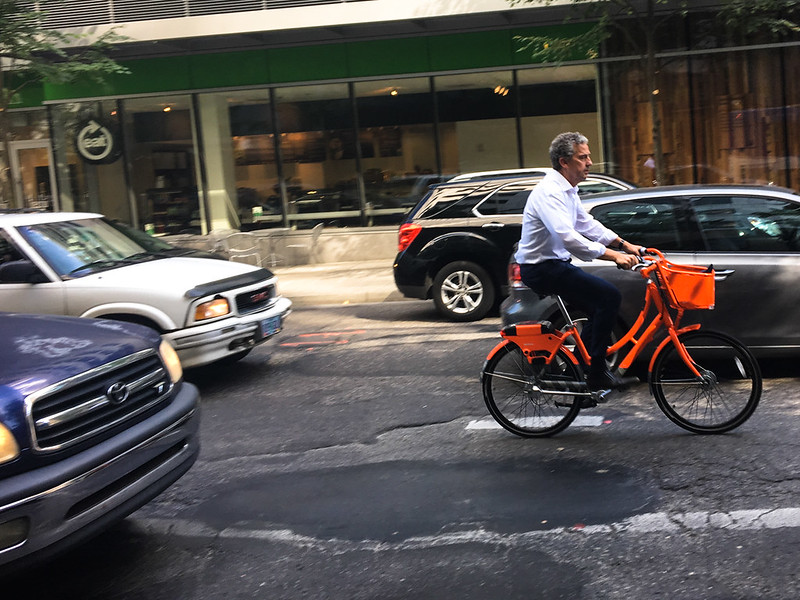 Biketown is popular with tourists, but the system needs more annual members if it wants to flourish.
(All photos by Jonathan Maus/BikePortland)

Portland’s bike sharing system could have a bumpy road ahead even if political vandals decide to leave it be.

Biketown launched nine months ago next week with 1000 bikes and 100 stations. Thanks to title sponsorship from Nike, it was one of the country’s largest bike-share launches — double the station and bike count of Seattle’s Pronto system when it launched in 2014.

Pronto, which like Biketown was operated by New York-based Motivate Inc., turned into the country’s highest-profile bike-share failure to date. Plagued by low ridership and a series of financial missteps and miscommunications, it shut down at the end of last month.

And though Portland’s Biketown is a very different system with a different price structure, its annual membership numbers for year one are on a very similar trajectory to Pronto’s. 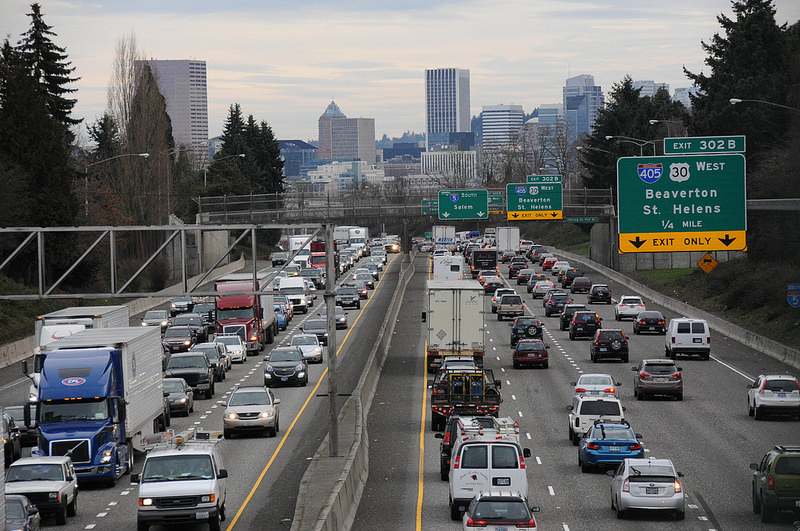 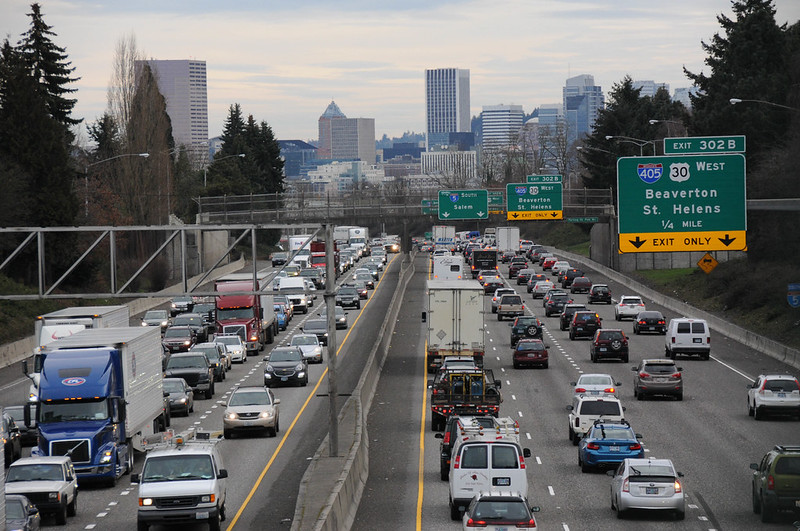 This is a guest post from former news editor Michael Andersen.

The top executive of Portland’s mass transit agency said this week that the Portland region has four top transportation priorities, and three of them are to expand capacity of urban freeways. 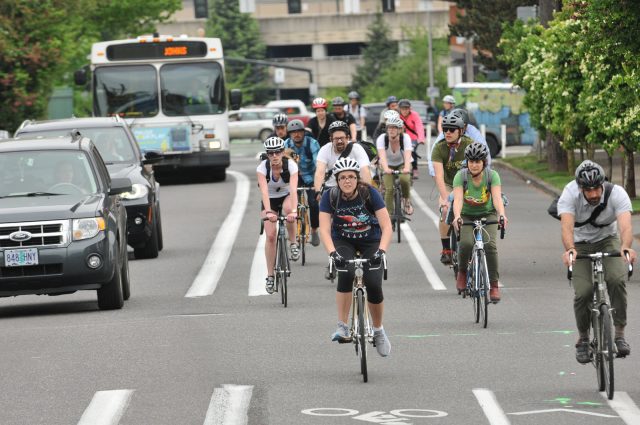 Rush hour on Williams Avenue in May. Once again in 2015, 7 percent of Portlanders said their main commute to work is by bike.
(Photos: J.Maus/BikePortland)

The great gasoline plunge of late 2014 hasn’t cut the rate of Portlanders biking to work, at least not in 2015.

In fact, drive-alone commuting among Portland residents hit a modern-day low last year — the fifth such record in six years — and public transit commuting jumped to a modern high of 13.4 percent. 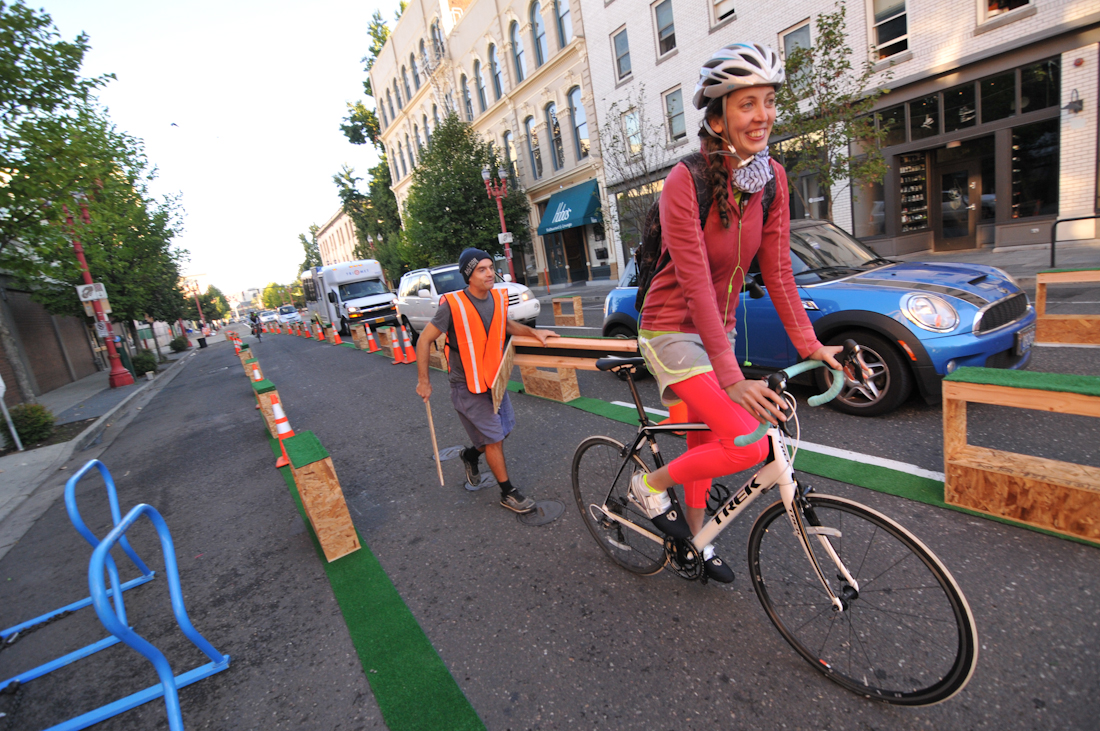 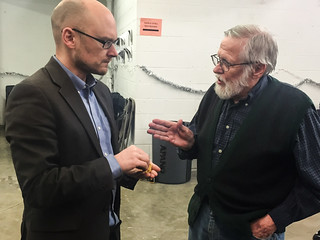 Not included in this listicle: always listen to Jim Howell.
(Photos: J.Maus/BikePortland)

Three years ago, when Jonathan and I were drafting the blog posts in which we’d talk about my joining BikePortland, he offered one of his many lessons that have stuck with me.

Don’t write about BikePortland as if it’s a thing I control, he said. Write about it like it’s a community.

My boss for the last three years isn’t always right. (Just ask him.) But that was one of the many times when he is. 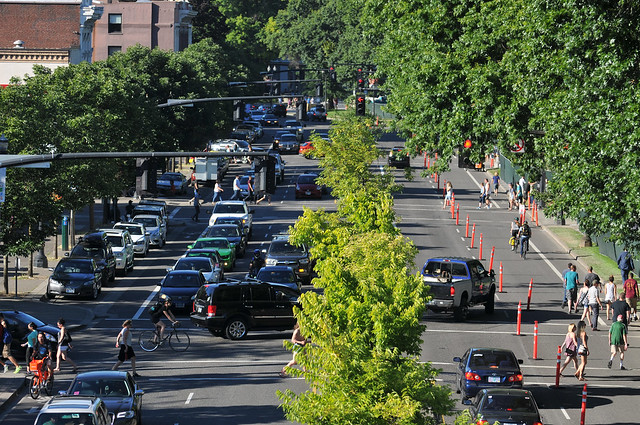 This weekend, the City of Portland plans to remove the temporary multi-use path from the eastern side of Naito Parkway so the space can be used by cars instead. 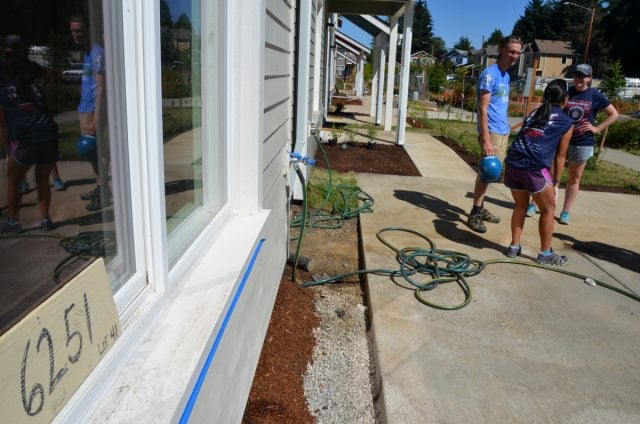 For the 15th year in a row, a crew of young adults on bikes pulled into Portland Wednesday almost ready to finish a cross-country bike trip designed to change the way they see their country.

Thursday’s time painting part of a new Habitat for Humanity house in the Cully neighborhood was one of 10 “build days” for the 24-person crew affiliated with the national organization Bike and Build. Part charity bike tour and part Americorps, Bike and Build’s mission is to “benefit affordable housing and empower young adults for a lifetime of service and civic engagement.”

SE Powell near 125th. The state’s current plan is to add sidewalks and a center turn lane but potentially no vertical separation between bike and car traffic.
(Image: Google Street View)

“Every one of our transportation advocates — from pedestrian to bicycle to transit to overall transportation — was in disagreement with their decision and they want a separated bike lane on Powell,” said Lore Wintergreen, advocate for the East Portland Action Plan. 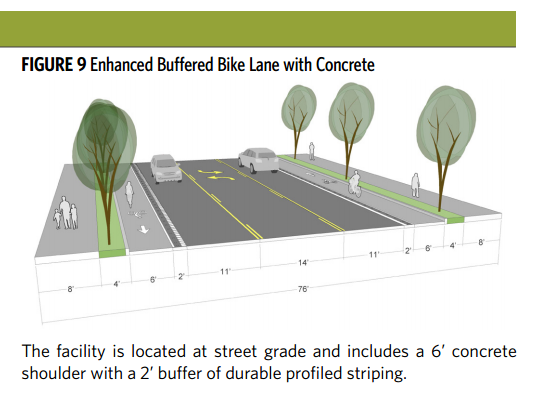 A sidewalk-colored bike lane (described here as a “concrete shoulder”) set off by slightly raised striping is the state’s preferred alternative for bike lanes on a reconstructed Powell Boulevard east of Interstate 205. The state-run road carries about 20,000 motor vehicles daily.
(Image: ODOT)

After an advisory group agreed that it wanted an upcoming rebuild of outer Powell Boulevard to include raised bike lanes, the Oregon Department of Transportation says they’re not practical after all.

Instead, it’s drawing the ire of some (though not all) advisory committee members by saying there won’t be any vertical protection between bike and car traffic on the busy state-run street. 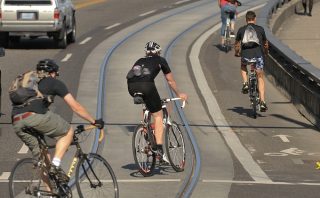 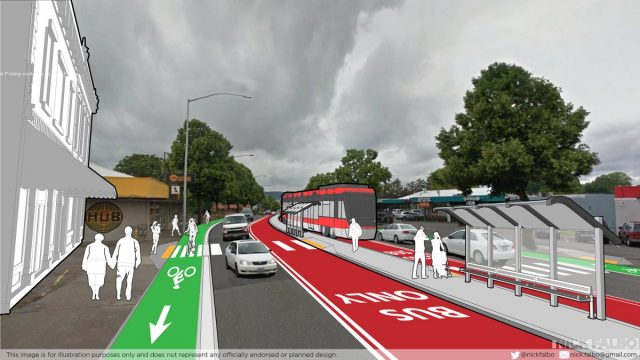 The City of Portland and the State of Oregon both say they want to free more of their constituents from traffic congestion and to reduce planet-killing pollution.

There’s no mystery at all about what this would look like on inner Powell Boulevard. Everyone with some measure of power who has considered the issue knows the answer. But for some reason, the millions of public dollars spent talking about that possible answer have never resulted in a street-level picture of it.