Erin Greeson Erin Greeson loves cycling. When she's not riding, she works as an advocate for a sustainable transportation economy and culture. Greeson currently works for Audubon in the Gulf Coast region and previously served Renewable Northwest Project. Over 10 years in Portland, she volunteered professional services toward vital community causes, including the Towards Carfree Cities Conference and as co-founder of activist group, We are ALL Traffic. Focused on climate issues, Greeson supports organizations that deliver creative strategies to address the great social, environmental and economic challenge of our time. With Portland as inspiration, she seeks bike options everywhere.

We return to our series on the burgeoning bike culture of New Orleans written by former Portland resident Erin Greeson.

Biking the Big Easy: Infrastructure and advocates on the rise

Biking to the end of the rainbow on the Mississippi River Trail.(Photos by Erin Greeson) Welcome to the second installment of a three-part series on bicycling and transportation culture in New Orleans by former Portlander and BikePortland contributor Erin Greeson. Erin currently lives in New Orleans. Read her introduction to this series here. Part II: … Read more

A Portlander now living in New Orleans shares a look at how bicycling is faring in what she calls Rebirth City. 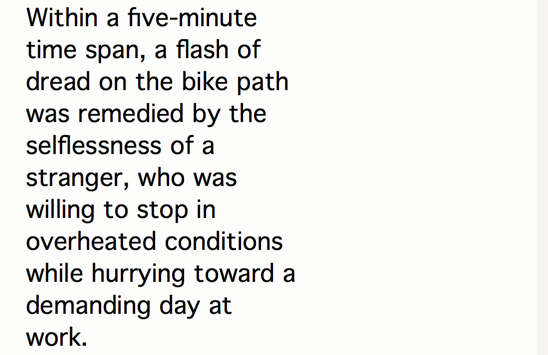 In record heat, a trail angel saves the day

The hot, eerily empty Springwater Trail yesterday.(Photos by Erin Greeson) Today, while commuting home midday to finish my work from an air-conditioned office, a great thing happened. Just when I thought I’d prepared smartly for the 100-degree ride — dousing my head in cold water beforehand and chugging water all morning long — my lack … Read more

Guest Article: In memory of teammate and friend, Steve Nelson

[This article was written by Erin Greeson. You might remember her in-depth examination of the bike messenger industry.] “Century” Steve Nelson (1960 ~ 2009) On the evening of Tuesday, April 14, Team Beer lost a beloved teammate, “Century” Steve Nelson after a battle with illness and a stream of hospital visits from friends and teammates. … Read more

Don’t kill the messengers: Inside the health of the industry (Part Three)

More on this series:– Read Part One – Read Part Two– Author Bio [Note from Publisher: Welcome to the final installment of our three-part series on bike messengers in Portland. This series is written by BikePortland contributing writer Erin Greeson (bio). In Part One, Greeson laid out the tough working conditions faced by Portland’s messengers. … Read more

Don’t kill the messengers: Inside the health of the industry (Part Two)

More on this series: Read Part One Author Bio [Welcome to Part Two of our three-part series on bike messengers in Portland. This series is written by BikePortland contributing writer Erin Greeson (bio). In Part One, Greeson laid out the tough working conditions faced by Portland’s messengers. In the article below, she shares finding health … Read more

Don’t kill the messengers: Inside the health of the industry

Erin Greeson [Publisher’s note: This is the first in a three-part story on Portland’s bike messengers by new contributor Erin Greeson. When her friend Zak Kovalcik crashed and broke his collarbone last fall, Greeson came face-to-face with the tough reality faced by Portland’s bike delivery professionals. In this in-depth, three-part series, Greeson shares how the … Read more