[This article was written by Erin Greeson. You might remember her in-depth examination of the bike messenger industry.] 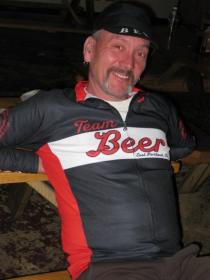 On the evening of Tuesday, April 14, Team Beer lost a beloved teammate, “Century” Steve Nelson after a battle with illness and a stream of hospital visits from friends and teammates.

Steve succumbed precisely in time to join his beloved Team Beer in spirit. As the call came and news was shared, heads bowed in quiet grief and meditation, and glasses were raised to quietly salute a teammate whose smile, wisdom and support would be sorely missed but never forgotten.

“I looked up to Steve, and he’ll always be with me,” said John Howe, a founding member of Team Beer. “I feel good knowing that I now have someone out there who I can talk to, laugh with and ask questions that I can’t ask my grandpa, who’s in a similar place,” he added. 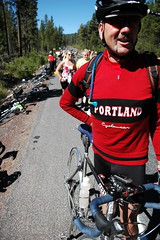 I vividly remember my first impression of Century Steve. It was at Mount Tabor last year; we both joined Team Beer at the same time. I have an indelible impression of the warm-hearted, quick-witted man who encouraged me before my first stab at racing. I remember the enthusiasm and support he provided at that moment, which remained and even expanded when I completed my attempt, rolling in –  and laughing at myself – in second-to-last place.

Steve was among the circle of teammates who hugged and congratulated me even though I felt self-conscious about the layers of sweat and grime on my body. It didn’t matter to Steve. He was proud.

Fondly known as “Century Steve” because of his passion and endurance for epic long-distance rides, Steve was an ever-present member of the Team Beer family. Rather than racing competitively, Steve preferred adventuring in Oregon’s stunning expanse of scenic roadsides, often slating hundred-plus mile rides into his mental notebook of life journeys.

Steve rarely missed an opportunity to support his fellow Team Beer mates at the races. Whether laughing with mud-coated friends in the cyclocross season rain, or lounging in the curb-side grass on summer evenings at Mt. Tabor

Steve rarely missed an opportunity to support his fellow Team Beer mates at the races. Whether laughing with mud-coated friends in the cyclocross season rain, or lounging in the curb-side grass on summer evenings at Mt. Tabor, “Century Steve” was always there to observe, support and share thoughts and insights with those fortunate enough to spend time with him.

Also, because Team Beer was founded on principles of community participation and plain-old fun, Steve was often the first to sign up for volunteer events, from the Worst Day of the Year Ride to the Filmed By Bike premiere, which he was eagerly slated to support again this year. He loved attending all kinds of events, including parties and “bike pub crawls” to celebrate teammates’ birthdays. 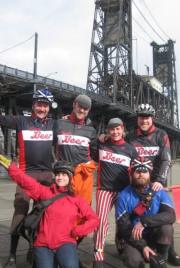 In addition to his love for team, Steve embodied and all-encompassing passion for cycling that is difficult to match, even in the bike-enamored Portland community. He not only rode distance rides, but approached them transcendentally. For example, he completed Cycle Oregon in 2007, and he rode Reach the Beach last year while helping his dear friend Brian who was battling lung cancer. At times Steve helped push his friend up the hills so they could complete the distance together.

This Sunday, April 19, Team Beer invites friends and the community to join us in honoring the life and spirit of our fallen teammate, Century Steve. As a fitting homage to a man who loved the challenge of hill climbs and the breathtaking vistas that they bring, the ride will route will feature three vantage points that Steve loved: Mount Tabor, then Rocky Butte followed by a continued ride west to Council Crest.

(Please note that the ride will be open and accessible to anyone who would like to participate: we will ride as a group, and no one will be left behind, no matter one’s speed or capability, just as Steve would have done. Participants can ride to one, two or all three points with the group, breaking away at any point preferable. Some of Steve’s closest friends were not as involved in cycling as he, so Team Beer hopes to make the ride approachable and possible for all, especially those who made the past week’s transition easier to navigate, thanks to their care and kindness.)

damn…
He was a presence at most races in town. Always smiling and encouraging. I’m not on his team, but it was easily recongized from a far.

didn’t know him but this article makes me wish i did.

we’re gonna miss you Steve. Big hugs to team beer. See you all on Sunday.

(Heard every time two Team Beer riders pass each other on the streets.)

Should that greeting be Steve’s epitaph? Could be worse.

Wow. I’m so sorry to hear this sad news. Steve was a volunteer at the Community Cycling Center, helping out on Drop In Nights, Holiday Bike Drive, even during Cycle Oregon when we were detailing bikes.

We’ll miss you, Steve. You had a big heart and an inspiring appreciation for sweet bikes.

Wow, what a sad moment. Steve lived around the corner from me. He had so much knowledge beyond cycling. He was a fantastic gardener and he was a wealth of knowledge. Steve, you will be missed.

@Aaron Tarfman – Thank you for your kind note. Yes, Steve was a wonderful and multidimensional person. His love for gardening is described in a full-length version of the tribute piece, which was more lengthy than BP posts can be (it is posted at http://stevenelsonpdx.blogspot.com/)

We send a huge thanks to Jonathan for paying tribute to Steve and for covering the story of Sunday’s ride in Steve’s honor. We hope to see many friends and community members there!

I’m by myself with three boys this weekend but we’ll try to join up for some of the ride. Sounds like Steve lived right if not long. RIP.

Damn, it was always good to see him at races and around town. He’ll be missed. I’ll raise a glass (or few) to him.

Tonight I drink to celebrate the life we have, not to drown sorrows of the lives we have lost.

Miss you Steve. Just a month ago we were drinking and painting.

I will miss Steve’s infectious smile and his love of laughter. Ride in peace, you dear sweet man.

Erin,
Sounds like Steve was a great guy — sorry for the loss of your friend.

P.S. The Spalding Building, and your fellow bike commuters miss you!

I just knew Steve from being a member of People’s Food Co-op. Such a pleasant guy and always so encouraging to me when I started riding again. This spring and summer just won’t be the same without seeing him around the neighborhood on that Aurora he liked so well.

Celebrate every day as if it was your last.

We will miss your smiling face, and your presence in the local bike scene. I remember riding with you on CO, Pioneer century and planning your Custom Serotta. I also recall how excited your were after working with Eisentraut building your own frame. I have an empty feeling inside knowing I’ll never see you on a ride again, but I know your in a much better place.

I miss talking with Steve in the bike shop. He was a good guy.

Steve, I’ll miss rides in the stix where you could name every plant (in Latin). I’ll miss your patience with me when I rode slow uphill. I’ll miss your evil sense of humor. I’ll miss having to remember that when I asked “How are you? casually, you’d actually tell me. In detail. Most of all I’ll just miss you.

Steve sounds like a great guy. I was wanting to do a ride tomorrow…

We will definitely miss you Steve. It was always a good time talking with you about anything bike related. You made the every Sunday ride a good conversation time. I remember a great photo from this past cross season of Steve enjoying a nice day taking a nap on the side line of the course. RIP

team beer hopes to see everyone at steves ride this afternoon!! 4:00 roots! one of steves local favorites everyone welcome!!

I got my first chance to really talk with him at last year’s Handbuilt show. I was selling the beer tickets and he was pouring the beer. That was when I got my first Team Beer sticker and it went right on to my cross bike.

That will be a good memory of Steve!

Much love from Team Woodlawn!!!

Sorry to hear this, and my heart goes out to Team Beer and others whose lives Steve has touched.

I didn’t know Steve well, but I did ride with him a couple of times, and running into him at Cycle Oregon 2007 was really nice – the CO crowd is not my usual riding bunch, and besides Jonathan, Steve was the only other rider there that I knew. I also rode with him on my very first Pedalpalooza ride. He was an interesting and entertaining person, and I’m sad that I won’t get to see him out on the road again for a while.

May the wind be at your back, Steve, and may the road be smooth and the ride pleasant.

I met Steve through my late husband, Brian Reynolds – also a cyclist. He rode with Brian on several organized rides, and some not-so-organized. Brian and Steve both had chronic illnesses and they shared many things about how to keep healthy and stay positive. I rode yesterday in honor of both of them and their friendship.
Thanks for organizing it – what an amazing memorial.
Gail Reynolds