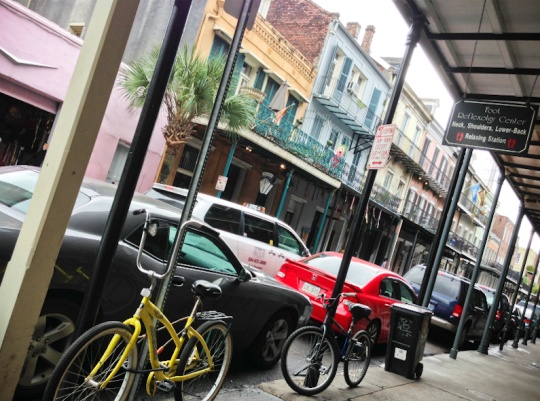 Welcome to the first installment of a three-part series on bicycling and street culture in New Orleans by former Portlander and BikePortland contributor Erin Greeson. Erin currently lives in New Orleans. 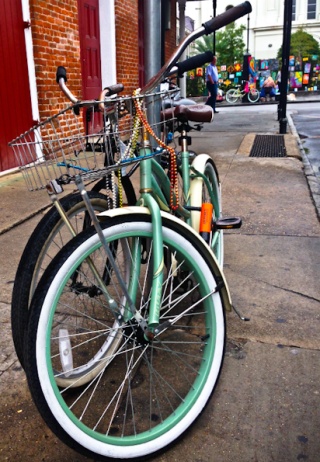 New Orleans is the city of rebirth: Approach it with interest in its history. Listen closely to its sounds and stories. Open your eyes, heart and mind to its traditions, and you will experience living treasure unique to but one place on Earth. Most known outside for its culinary prowess, Carnival revelry, and as the birthplace of jazz, New Orleans, at its core, is all about human connection: insistent community. Rising up through unthinkable storms, floods, oil disasters and human tragedy, its people are among the most resilient in the world. They are inspiring beyond the sum of the city’s songs, recipes and poems, a people to celebrate and respect.

It only makes sense that New Orleans is a burgeoning bike city.

Bikers in the Big Easy

Crescent City bike culture is as diverse as the town’s “gumbo” DNA. In any of New Orleans’ vibrant neighborhoods, one can see people riding bikes. Ninth Ward locals “make groceries” and visit neighbors by bike. French Quarter residents dodge taxis and tourists as they roll cruisers down Royal and Dauphine. Central Business District (“CBD”) rush-hour includes bike commuters interspersed amid a frenetic maze of cars, trucks, buses, streetcars and the occasional mule-drawn carriage. Marigny residents, including a friendly hipster contingent, ride fixies up St. Claude. Musicians bike to work. One resourceful and coordinated artist slings a full string bass across his back. Incomparable pianist, Mike Hood, bikes to his regular gigs at LaFitte’s Blacksmith Shop — the oldest bar in America — popular among locals, tourists and ghosts. 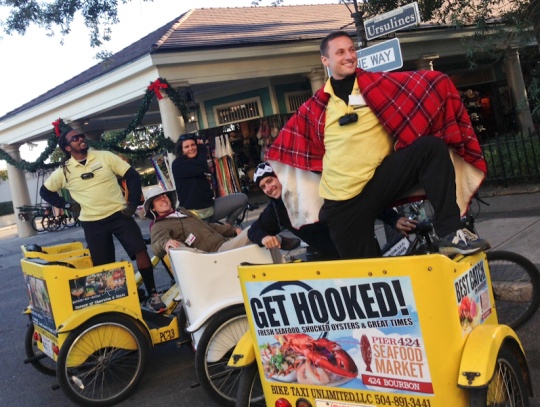 Pedicabs are public (and fun!) transit.

Tourists and locals alike enlist the legs and insights of pedicab drivers, whether heading home from Saints games at the Superdome, or to transport people who may have difficultly walking in traditional “second-lines” during weddings, funerals and events (processions led by booming brass, drumbeats, and people marching, dancing, waving handkerchiefs overhead).

“The city — though forever different from what it was — is thriving in new ways. Among this momentum is growing effort for New Orleans to become a top bike town.”

In New Orleans, people are generous by nature, spirited and exceptionally kind. Passing strangers greet one another like close friends. Moving through the day, you experience repeated instances of “Good mornin’!” “How you doin?” and “Where y’at?” Rather than getting uptight when a man calls a woman “baby,” the term of endearment unilaterally applies. Everyone calls everyone “baby.”

This remarkable kind of community drove the rebirth of New Orleans. In 2005, Katrina’s hell-on-earth wake of destruction left some outside skeptics questioning the reason to rebuild. In  2012, Forbes ranked New Orleans the fastest-growing city in the United States. Today, new businesses are opening, entrepreneurs are investing and non-profits are blossoming. Artists are innovating with new pictures, rhythms, paintings, dishes and songs. Historic golden-era theaters, like the Saenger, are reopening. New hubs, like Cafe Istanbul, offer fresh platforms for creativity in today’s community.

The city — though forever different from what it was — is thriving in new ways.

Among this momentum is growing effort for New Orleans to become a top bike town.

— Stay tuned for the next installment in this series when Erin takes a closer look at recent bike infrastructure improvements in New Orleans.

Beautifully written and evocative. I look forward to parts 2 and 3. I was lucky enough to visit New Orleans shortly before Katrina hit. It was beautiful then, and it’s heartening to know that it’s making a comeback.

A beautiful beginning, I can’t wait to read more. The soul of New Orleans is difficult to explain, but Ms. Greeson’s essay is unfolding like a warm, comfortable blanket. And this encourages me to get back on my bike, head down to Frenchmen Street, and keep on rollin’.

Timely article! We just arrived in NOLA last night (from our home in PDX) and brought our bikes. We enjoy getting out into neighborhoods we wouldn’t otherwise see on foot. Beautiful city anyway, but by bike it is magical.

Let’s not forget how the tragedy of NO happened – government inaction in the face of predictable outcomes. The resulting flooding from the storm surge was predicted long before the event occurred, even the height of water in NO, without action from those charged with operation and maintenance of the levies.

nicely written, but I’ve always been taken aback by this quote about N.O.

“The city where imagination takes precedence over fact.”
– William Faulkner

So well done and evocative of new orleans and its many treasures, the author of this article, being one of them!

Yes, yes, yes! Glad to have you writing about the most interesting city in North America!

TOM
nicely written, but I’ve always been taken aback by this quote about N.O.
“The city where imagination takes precedence over fact.”
– William Faulkner
Recommended 0

Tom, from my perspective as a native New Orleanian, I feel that Faulkner is quoting a positive attribute of the city- that the power of the imagination holds dominion over the empirical there. (That also has downsides as expressed by the local politician/politics…)