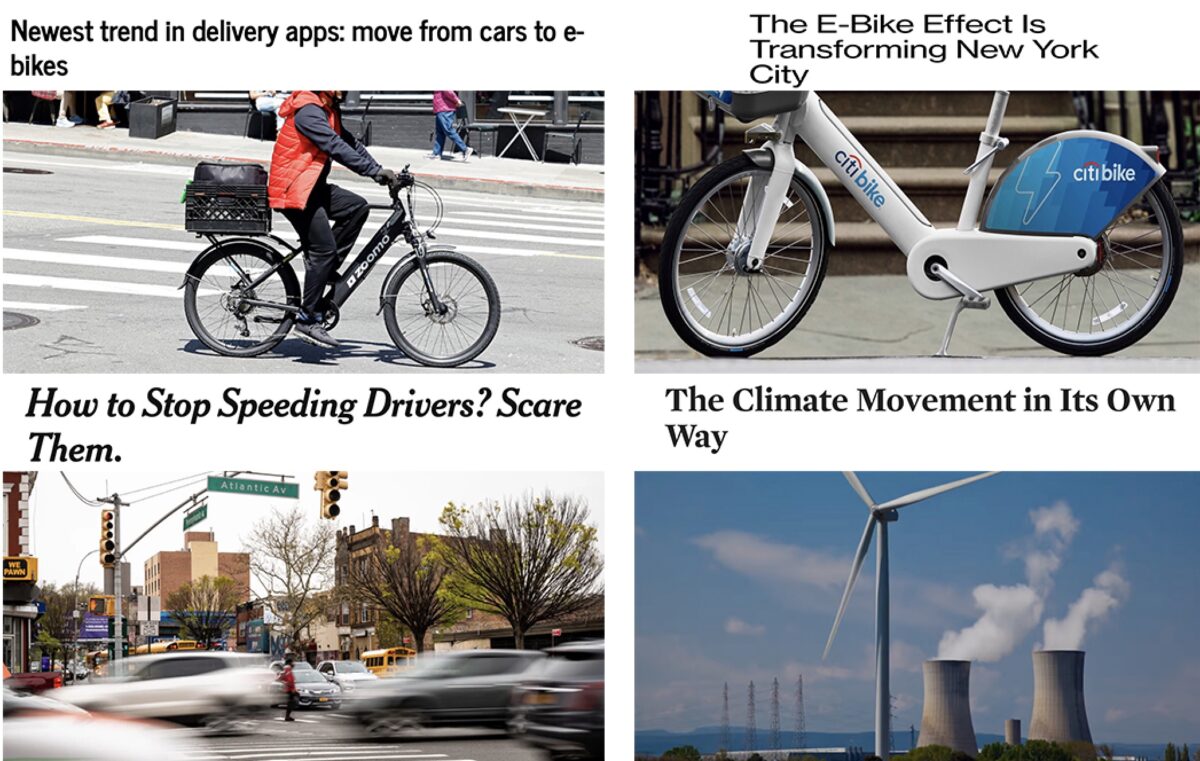 Welcome to another wonderful week. Before our usual fun and games begin, we’d like to share the most notable items our writers and readers came across in the past seven days…

Cars and burritos: The fact that people are driving around multi-ton vehicles in big cities like San Francisco just to deliver a few burritos is a testament to our failed system and yet another reason we need leaders to introduce policies and regulation that strongly favor smaller vehicles like bicycles to do the job.

Change is good: In an important piece on the climate movement, veteran NYC-based transportation reform activist Charles Komanoff makes the case that major climate orgs need to look in the mirror and do more to “challenge American motordom.”

Bikes and bullets: Four years after a boycott and protests against its ties to gunmakers, the corporate parent of popular bike brands like Blackburn and Giro have decided to split their outdoor and ammunitions brands into separate companies.

The right bike: Yet another voice calling for folks to be careful about which bike they buy because the industry is still overly-focused on selling people fast/aggressive race bikes when most people would be happier with something more chill.

Asking nicely: With a record amount of traffic deaths, NYC will spend $4 million on a billboard marketing campaign that will try and scare drivers into slowing down.

E-bike revolution status report: New York City likely has more e-bike riders than any other city in America so it’s always interesting to get an update on how the revolution is playing out and what it will take to get to the next level.

Math always wins: Norway plans to roll back electric car purchase incentives and wants more people to take the bus and ride bikes because are just now realizing that electric cars are the same as gas-powered cars in every single way except their power source.

IBR questions: While the I-5 freeway expansion project between Portland and Vancouver took a big step last week, City Observatory’s Joe Cortright wants us all to consider that several important unanswered questions remain.

Something fun: This week’s New Yorker cover is a wonderful ode to cycling from artist Frank Vivas.

Electric cars are the same as gas-powered cars in every single way except their power source.

Power source is a very important distinction, especially in Norway — upgrading your car from burning gasoline to consuming a much smaller amount of 92% hydro energy is a pretty big win from an environmental/climate standpoint even if other issues remain unresolved.

With gasoline car sales ending in a couple of years, it probably makes sense to ramp down the subsidies intended to encourage early adoption of EVs and establish them in the market.

Just a reminder that “a couple” is 2. So you might be correct by saying “gasoline car sales ending in a couple decades”.

Not in this case. Norway is ending gas car sales in 2025, according to the article.

Is 2.5 close enough to the technical definition of “a couple”?

Except that Norway seems to be counting gas hybrids as “electric” in their statistics, which is ridiculous. Fossil-fuel powered vehicles are 35% of the sales currently, and will still be sold in Norway in 2025:

These statistics do count conventional hybrids as “electrified” – somewhat of a strange designation, since they still get 100% of their energy from gasoline – but all of the top vehicles can run at least partially on electricity. And conventional hybrids make up less than 10% of new car sales anyway.

Except that Norway seems to be…

A couple of decades (or never) sounds about right for Gilead … erm …the USA but Watts was referring to Norway, a democratic nation with a modicum of social cohesion where 2024 is the last year that “gasoline car sales” will be allowed

Yet another voice calling for folks to be careful about which bike they buy because the industry is still overly-focused on selling people fast/aggressive race bikes when most people would be happier with something more chill.

The tail does not wag the dog. There would have been far fewer casualties during the rise of mountain bikes in the 90s if it did.

Manufacturers make what shops can sell. Shops sell what people want to buy. This article plainly states that customers are asking for these bikes, rightly or wrongly.

Math always wins … electric cars are the same as gas-powered cars in every single way except their power source.

I was completely unsurprised to see the article cited in this Monday Roundup refer to a math-based modeling study that suggested that a large fraction of PM2.5 particulate pollution comes from tires. This report was seized upon by anti-electrification proponents to argue that EVs are even more polluting than ICE vehicles (via countless social media and blog posts). This “cherry picking” triggered my BS detector so I skimmed through 5 peer-reviewed publications which make up the majority of this literature and found that chemical fingerprinting estimates of tire-wear PM2.5 ranged from 0.1 percent to a few percent in urban areas.

Among the first studies to use chemical methodologies: As shown on Table 2, the TRWP made a small contribution to total ambient PM2.5 levels, representing 0.1–0.68% of the total PM2.5 across all locations. The range of concentrations of TRWP were 0.012–0.29 µg/m3 in London, 0.010–0.1 µg/m3 in Tokyo, and 0.004–0.072 µg/m3 in Los Angeles. The highest concentrations were recorded at the Blackwall Tunnel Approach in London (mean 0.104 µg/m3 and range (0.03–0.29 µg/m3)) where significant braking activity occurs before the tunnel portal which creates more tire wear abrasion than constant speed driving.

Soren, I’m sorry but a post like this one always causes me to have the tl;dr reaction.

The main point seems right to me: electric cars have the same environmental impact as gasoline-powered cars, give or take a few treads of tire.

electric cars have the same environmental impact as gasoline-powered cars

That’s neither Soren’s point nor true.

Fixed it for you:

NYC will spend $4 million on a billboard marketing campaign that will try and scare drivers into slowing down.

The piece by the City Observatory’s Joe Cortright…is almost a home run, but it is weak on points #2 and #6. (I cannot tell if Joe is supportive of tolling in his summation comment #2; and for #6 he shows that he has not ridden the CTRAN express buses often during peak hour pre COVID [vs reading schedules on-line]. Those of us ‘silent riders’ who have for decades experienced the often up to 1 hour slog through traffic need some relief. Plus there is still another unspoken benefit of being able to get off a MAX train on the east side of the river if one were to have a MAX link to Vancouver…the ability to walk or bike on to other points outside of the CBD vs. being only dropped off along the bus mall and having to backtrack. This has become ever more important over the last 20 years as there are more desirable destinations in North and East Portland vs the 1990s).

I noticed that as well. The CTran buses can get downtown in the time quoted, but that rarely happens. A consistent 35 minute trip on MAX is better than an extremely unpredictable 20-60 minute express bus trip. It’s still a shame that the included LRT is so weak, though. It won’t reach very many riders, and will force transfers for many existing riders.

My son took CTran daily for 6 months last year, and preferred it to driving, even though he had to get up earlier and pay for the bus, and could have used my car for free. I was surprised, but he enjoyed using a bus service that was able to focus on transportation and not provision of shelter.

Joe, thanks for sharing the FOIA found rendering of the Vancouver side view…as many Clark County residents experienced with the CRC were scratching their heads last week as to why there were only northward views shared by the IBR group.