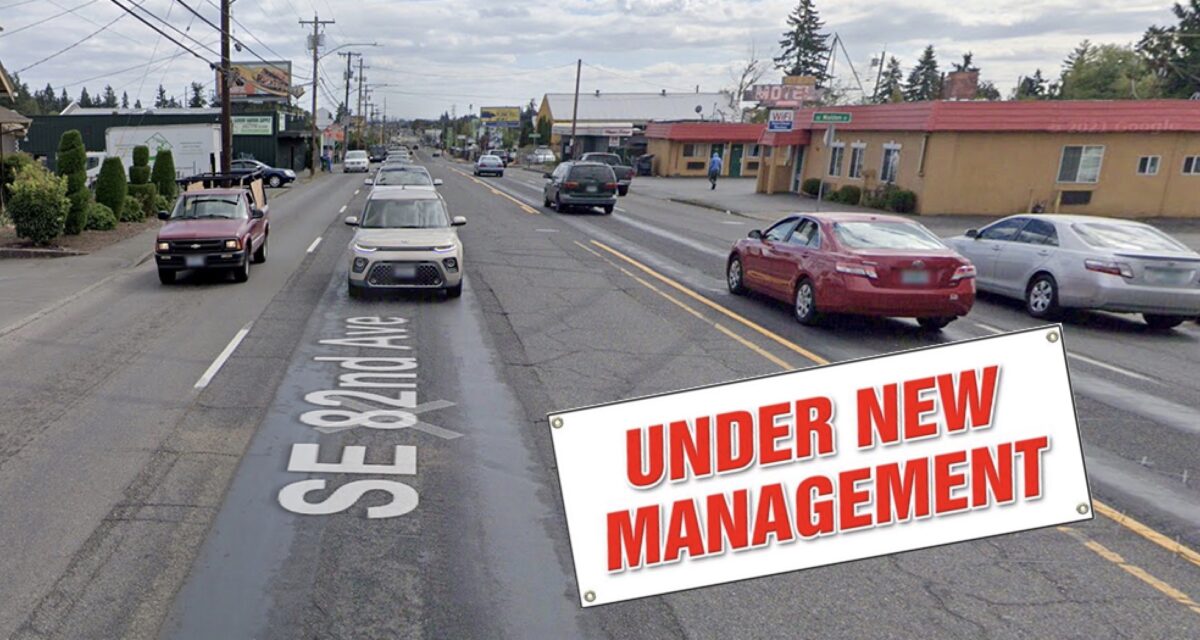 That means the Oregon Department of Transportation can no longer tell us what we can — or can’t — do with our street in our own backyards.

Jo Ann Hardesty, the commissioner of transportation who lives in the corridor, was ebullient as she introduced the ordinance. “Today is an exciting and historic day in the city of Portland, especially in my neighborhood of east Portland,” she said. “Many people thought we would never see 82nd Avenue transferred to local control… but here we are.”

This transfer has been a hope and dream for many years and it took a combination of the pandemic and the right elected leadership coming together all at the same time for it finally happen. The barrier was always money. ODOT wanted it. PBOT wanted it. Advocates wanted it. Politicians wanted it. But the way transfers work is that a road must be brought up to good condition before a trade is made. And with the vast needs of 82nd — from pothole repair to more safe crossings — that price tag scared everyone away.

Federal pandemic relief funds changed all that. The American Rescue Plan Act (ARPA) kicked in $80 million to make the transfer math work out. That money helped convince ODOT to pitch in $70 million and PBOT $35 million to hit the magic number of $185 million.

But would it have happened without new political leadership in town? Especially leaders like Hardesty and new State Rep Khan Pham, who not only lives along 82nd Avenue but was actively pushing to make it better as an advocate before she was elected? Very likely not.

In testimony at council yesterday Pham forced Mayor Ted Wheeler and other commissioners to hear how devastating the street has been to the people who live around it. “It’s been really dangerous for so many people just merely walking across the street or biking across the street, particularly our youth and elders and people with disabilities as well as immigrants,” Pham said. She and many others used years of tragedies to fuel their advocacy. “This agreement truly is a testament to organizing and refusing to take ‘no’ for an answer.”

What’s important now isn’t how it happened (although it’s an important case study), but that it has happened.

In the coming years we’ll see lots of action on 82nd. PBOT already has a plan for an initial phase of $80 million in updates (the federal funds must be spent by 2026, thus the relatively short timeline) to be built in the next 1-3 years that includes: new streetlights to cover 100% of the seven mile stretch between NE Killingsworth and SE Clatsop, 18 new crossings, nine traffic signal rebuilds, and 3.5 miles of new pavement.

The next phase will be the big discussion about what the future of 82nd will look like. Will we finally make a significant reduction in driving space? Will some sort of bikeway be possible? What about transit? PBOT offered a tiny hint at that last question yesterday when a staffer showed a slide that said they plan to position the project for federal transit funding.

Whatever happens, the future of 82nd — and the places and people around it — looks a lot brighter now. And as we weigh its future, I hope folks keep in mind the voices from PBOT’s new video below that lays bare ODOT’s gross negligence of the street in the past and inspires us to do better in the future.

I live a couple blocks from 82nd (along with thousands of other people), and I am happy to FINALLY see this start happening. The walkability of that street is terrible with narrow sidewalks and cars pulling in and out of parking lot entrances everywhere. Even around the bustling 82nd transit center, the access into the neighborhoods is poor and disconnected. We basically never walk towards 82nd, and it might as well be a wall. I used to go to the nearby market, which involved crossing 82nd. Always had to frogger across as there is such a lack of crosswalks/crossings/refuge islands, and car speeds are so high.

Car-centric people used to complain about Foster, and now complain about Division, but I think that type of divided road with physical barriers and pedestrian refuges would be a great treatment for 82nd. Even some of the treed dividers from MLK would be greatly welcome in the sea of used car parking lots.

I am hard-pressed to be excited for the city of Portland to “take over” anything but they certainly can’t do worse than the state. Maybe they can bring back cruising 82nd. Fingers crossed.

Average daily traffic count (relatively constant over the whole corridor) is ~25,000 (both directions), with ~1,100 vehicles per hour (one way) at AM/PM peak.

The FHWA advises that road diets are feasible for traffic volumes under 20,000 ADT and 875 vphpd peak.

So over on both metrics by about 20%…but within striking distance!

Great! Now the same crew that destroyed Holgate, Foster, Division, and made every speed limit a crawl as well as turn all gas tax paid for streets into freeloading bicycle lanes, will get to destroy 82nd also.
How long until it is one backed up lane each way at 25 miles per hour limit with never used bike lanes and no parking?
Yeah, another nail in The People’s Republik of Poorland’s coffin!

Boyd
Reply to  Chuck U. Farley

I have driven, walked, and biked on SE Foster a number of times since the improvements were made there. I can say without a doubt, it is a much improved corridor for all three modes of travel than it was before. I sure hope something similar is done on 82nd.

A serial killer that was protected by ODOT has finally been taken into custody.

Why do my comments never show up anymore?

Hi Boyd, your other comment was in the “spam” folder for some reason. I’ve just pushed it through. Sorry about that.

No problem. Thank you!

I really like Metro’s “community boulevard” concept . This is the design I’ll be pushing PBOT to adopt. Bus lanes, wide sidewalks, and street tree’s should be the top priority. If that means reducing capacity for cars, then that’s OK! Cars can use I205 instead.

Wow. That is beautiful.

This is exactly what I advocated for on Hawthorne but was accused of being a cage-loving neanderthal by “healthier hawthorne” supporters.

Woah I really like that. I don’t recall seeing that rendering before. Is that from a TV Hwy plan? The cross-section w a shared bus/bike lane is what I’ve had in the back of my mind as being possible for 82nd so this is really neat to see!

I picked this up from Metro’s Guidelines for Designing livable Streets and Trails. There’s several other great renders in there.

Thanks. Good stuff in there.

That is cool. Like W Burnside, but with slower traffic and less chaos.

There’s a flower shop right at the Clack/Multco county line, and it has like 10 inch “sidewalk” on the 82nd side. If I were that owner, I would marble up that place, so I could get more $$$ in the upcoming eminent domain lawsuit…

I always wondered how that flower shop got away with building into what should have been the sidewalk space. It looks as if it was an extension to the original building but I am not sure. There are several areas on the other side of the street with equally narrow sidewalks too! I drive there often to go to Fred Meyer and am amazed at how many people walk, ride bikes, use mobility devices on 82nd Ave even with the terrible sidewalk and crossing conditions. I’m also thinking that the city of Portland improvements will stop at the city line and that terrible stretch will remain effectively cutting non-drivers off from the shopping areas further south.