Perspective is everything. It’s why many bike advocates dream of having leaders who’ve actually ridden a bike, so they intimately understand the issues we face. Perspective is crucial because it forces us to go outside our personal bubbles — something that’s severely lacking in today’s polarized and self-absorbed social-media soaked world.

The new “In My Shoes” program from Portland-based nonprofit Word is Bond is an opportunity to be exposed to the perspective of young Black men. Through a series of upcoming walks that begin next week, the group’s youth ambassadors will share their perspectives on their neighborhoods. It’s a chance for them to take charge of the narrative.

“It’s about telling my story, showing my neighborhood from my perspective exactly, and changing the narrative about my neighborhood,” said 18-year old Mohamed Bullo, a De La Salle North High School student who will lead a walk in the Cully neighborhood in northeast Portland February 12th.

In an interview Monday I asked Bullo what he thinks the narrative of Cully is now and what he hopes people learn on his walk.

“The narrative is that it’s a bad neighborhood, or there’s all this stuff going on. But I haven’t seen it. I also want to show that there are kids like me out there, going to college, having futures, and that are involved in making the community better.” 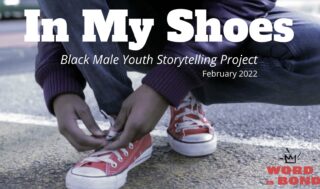 Word is Bond Executive Director Lakayana Drury said 24 people have already signed up for the Cully tour. He’s also invited Portland Police Officers to come along. Drury has built many relationships with police officers as part of his work to change narratives around young Black men and give them a stronger voice as leaders. “I see this as an opportunity for both the community and law enforcement, and I really do hope that officers take advantage of it because there’s not many spaces where they can get this kind of thing,” he said. “You could just go to that neighborhood, but you wouldn’t be able to see it through someone like Mohamed’s eyes.”

To prep for the walks, each youth ambassador completed a community audit that includes (among other things) stats and insights into transportation infrastructure and the built environment. Bullo said he’ll share what he thinks is wrong with Cully’s roads, sidewalks, and transit facilities (or lack thereof). “It’s also about what I’ve seen change in the past 10 years,” he added.

Drury said he’s met with staff from the Portland Bureau of Transportation (PBOT) and they’ve shared some data to inform the walking tours. He also plans to share the community audits with them in case the information is useful as feedback or to help prioritize future projects (he said the City Auditor is working on an audit of Vision Zero that might also use some of the data).

When asked what he hopes people take away from his walk, Bullo said, “My neighborhood has been getting gentrified a lot in the last three years. You see it happen right in front of you. That’s one thing I want people to take away.”

Bullo said he’ll focus on sharing his views of his neighborhood, but if anyone asks what he thinks would make it better, he’s ready to share his big idea: “I’ve always talked about wanting an indoor community center, like with an indoor basketball court, maybe a swimming pool… Adding that somewhere in Cully would be really amazing.”

In addition to Cully, the 45-minute walks will be held in Lents, Mt. Scott, Parkrose, Kenton, Vancouver, downtown and Beaverton starting February 5th through the 26th. If you want to walk, talk, listen and learn with these young community leaders, check out the Word is Bond website where you’ll find more information and sign-up forms.

What a wonderful idea! Good luck with your tour, Mohamed, and I hope Cully gets that rec center/swimming pool.

Group ride leaves from Piccolo park at 10 AM this Saturday February 5th to the kick-off of Word Is Bond’s storytelling project by Black male youth about their own neighborhoods. Details on https://www.shift2bikes.org/calendar/ You must also register directly for the In My Shoes walking tours at https://www.mywordisbond.org/inmyshoes Email me about the ride through the Shift calendar. See you there!

Our ride group has received permission to attend the Word Is Bond – In My Shoes tour even though registration online with Word Is Bond has been closed, and the tour is full. You can register by sending me an email through the Shift Calendar https://www.shift2bikes.org/calendar/event-14477, or on a sign-up sheet when you arrive for the ride at Piccolo Park on SE 28 between Division and Clinton at 9:45 AM tomorrow, Saturday, February 5th.

We will keep in the background, and a low, respectful, attentive profile, especially if we are a large group.

Should be a fun, thought-provoking, uplifting ride and day!

This is great! And clearly popular & needed, as almost all of the tours are filled. Would be great to see this expanded, bummed I missed out on a lot of the full tours.