It was the St. Johns Bridge I’ve long dreamed of.

I’ve ridden on this bridge countless times, always with some level of stress because there is no safe space for bicycling. Even when it was part of the Bridge Pedal route, one side was still open to drivers and the chaos of the event crowds took away from the experience.

Last night was much different. I could hear myself think. I could relax. I could enjoy this public space that’s been hidden beneath the din and dangers of daily traffic for all of its 91 years. 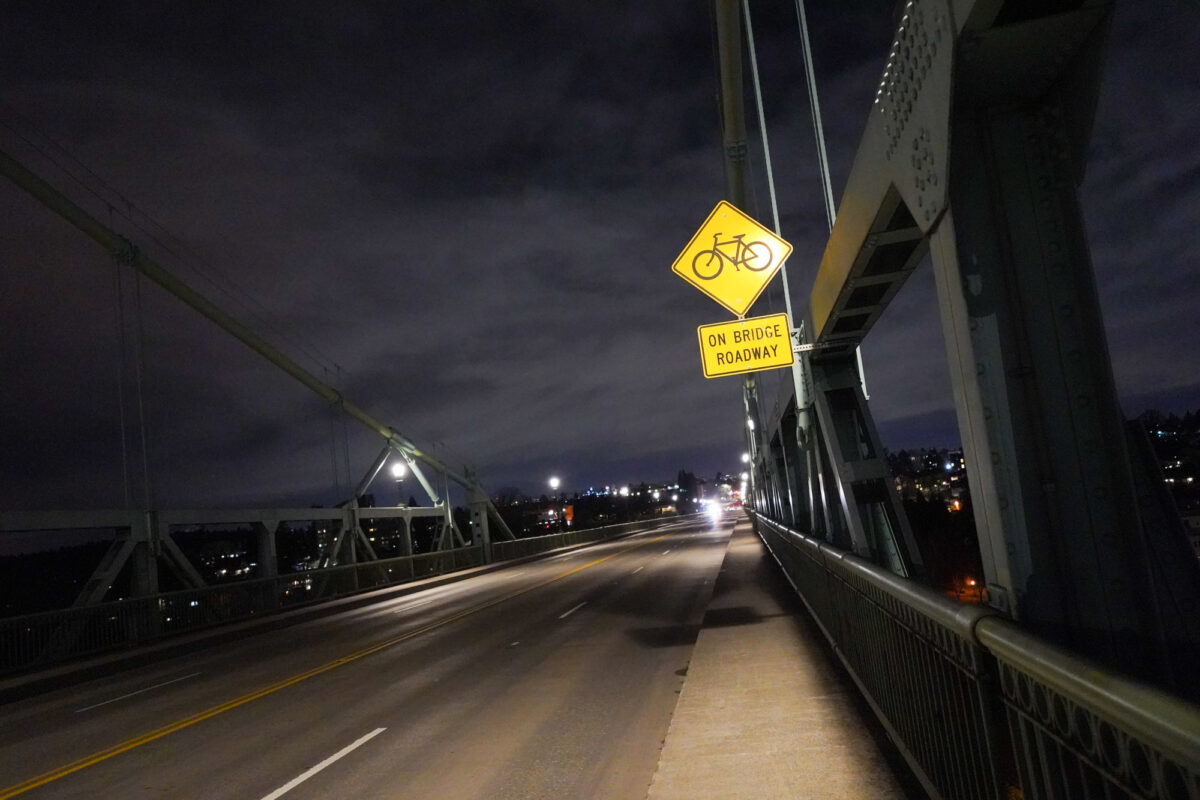 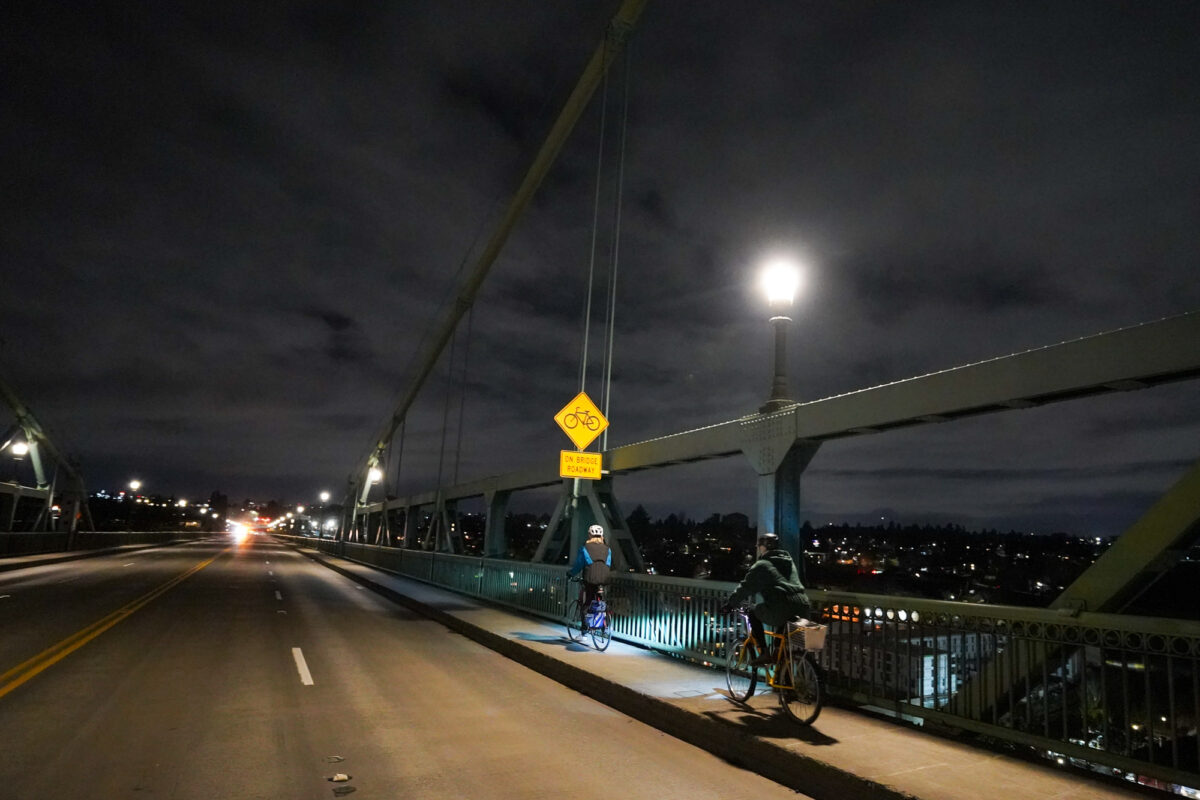 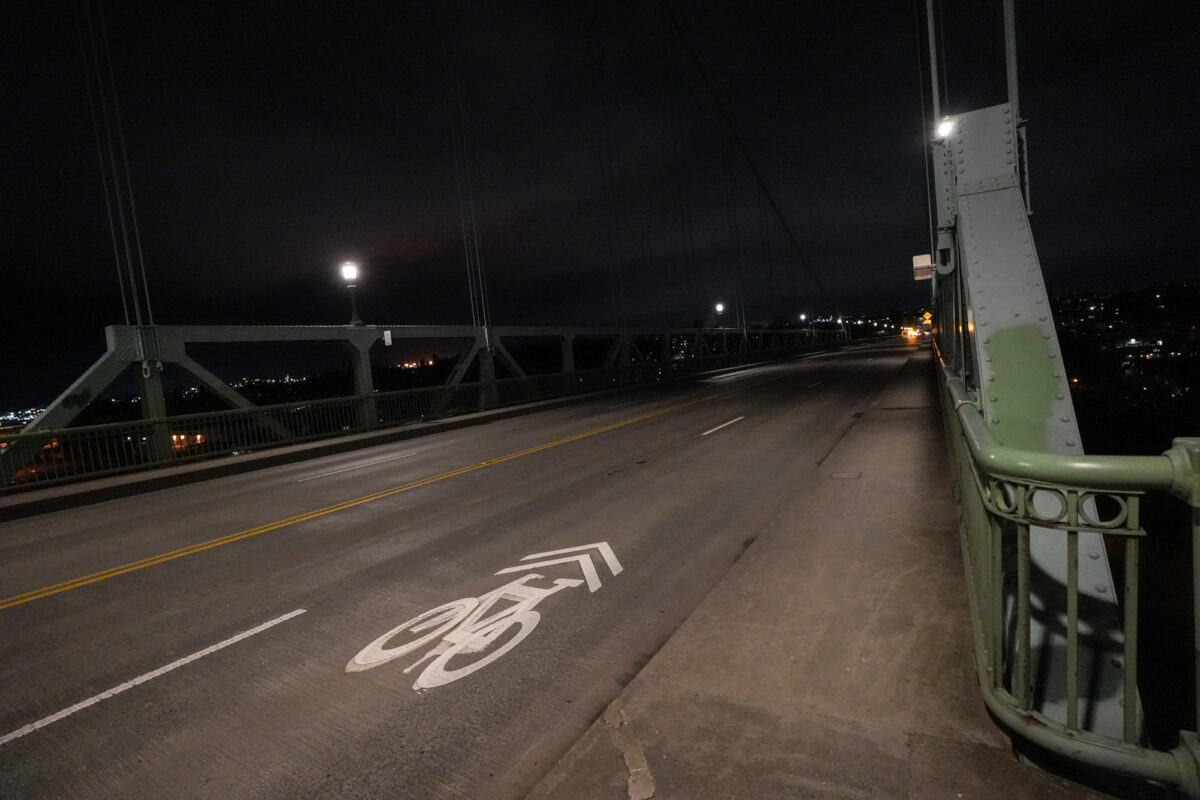 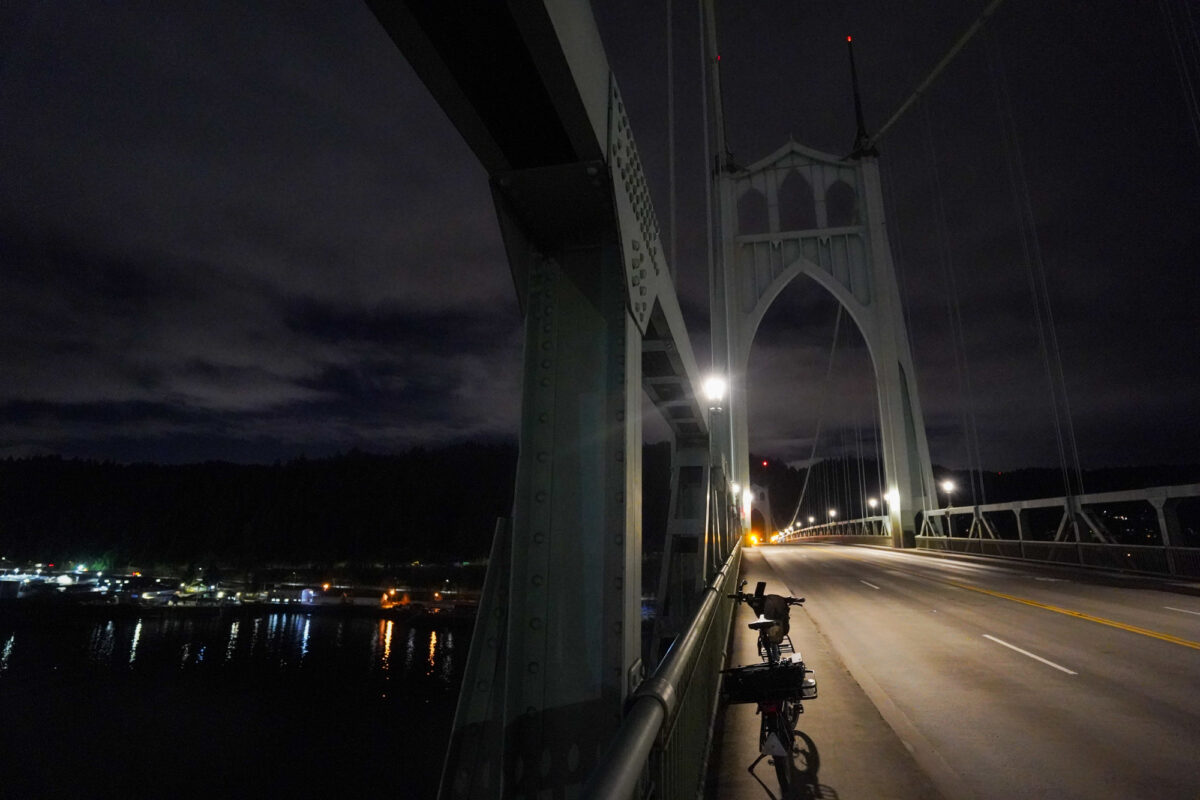 I wasn’t sure what to expect on the first of five nights where the Oregon Department of Transportation has decided to prohibit driving on the bridge due to a routine maintenance project but still maintain access for walking and biking. As I rolled up just after 10:00 pm crews were setting up road blocks and there was two other folks (BikePortland readers Tyler and Missy, in photos) waiting for the fun to start.

Once the barricades were up I rolled around and nodded to a few guys from the flagger team. I could tell one of them didn’t want me there and I prepped for a tense interaction. Then another guy, perhaps seeing that I never stopped my forward motion and looked determined to press on, said “Just stay on the sidewalk”.

The first thing I noticed was how quiet it was. And the views of downtown, Cathedral Park, Forest Park, and the river took on a much different vibe without noise and in the absence of bright lights.

I spent a bit of time mid-span in those little alcoves and chatted with a few other folks who braved the cold and late night to enjoy their bridge.

As I rolled down the sidewalk and headed home, all I could think is how amazing it would be if ODOT worked with the St. Johns community to have a carfree day (at least) once a year. Can you imagine?! Local vendors, music, games! This bridge has tremendous potential as a public space and point of civic pride, but we’ll never see it reach that potential as long as people outside of cars feel like they aren’t welcome.

This maintenance project is scheduled through this Friday night (note that it could wrap up early). ODOT says the bridge will be closed to cars from 10:00 pm to 5:00 am each night.

Get a bit more of the flavor in this little video I put together from last night:

“Carfree” is so close to “carefree.” It just makes sense!

“This bridge has tremendous potential as a public space and point of civic pride, but we’ll never see it reach that potential as long as people outside of cars feel like they aren’t welcome.” Great quote and point!

Jonathan, yes you hit on an important point…other than safety impact is the impact of plain old noise.

I hope the PSU planners / environmental techies take some audit measurements for the baseline at this facility during the closure.

Noise pollution is an important [re] emerging issue for highways and highway managers.

This can’t be said and repeated enough. I’ve lived in many places–rural and urban–but never as close to a freeway as I do now: about four blocks north of I84. It is never ending noise. I can even hear it while in my house. Then, a few months ago, it was partially closed for the BB install and VOILA there was a magnificent difference. Carbon and particulate pollution get all the pollution bandwidth, but noise should be included as well.

I learned interstate noise is omnipresent even as a child growing up on a farm 2.5 miles from a rural stretch of interstate in a low population state. If only everyone could think more about the noise autos create all the time.

I’m glad you included the video because it really shows the quietness that caught your attention. The lack of bright lights that you also mentioned must have made the view and experience much more incredible also.

I’m also glad you mentioned the bridge’s potential as a public space, because bridges aren’t typically thought of that way. Mid-river on the Tillukum Crossing at night has always felt like one of the city’s greatest spaces. The fact that it’s also quiet except for the occasional transit vehicle makes that feeling even more powerful. The Steel Bridge’s pedestrian/bike span is another great public space experience. They all also allow you to experience the river itself as a public space.