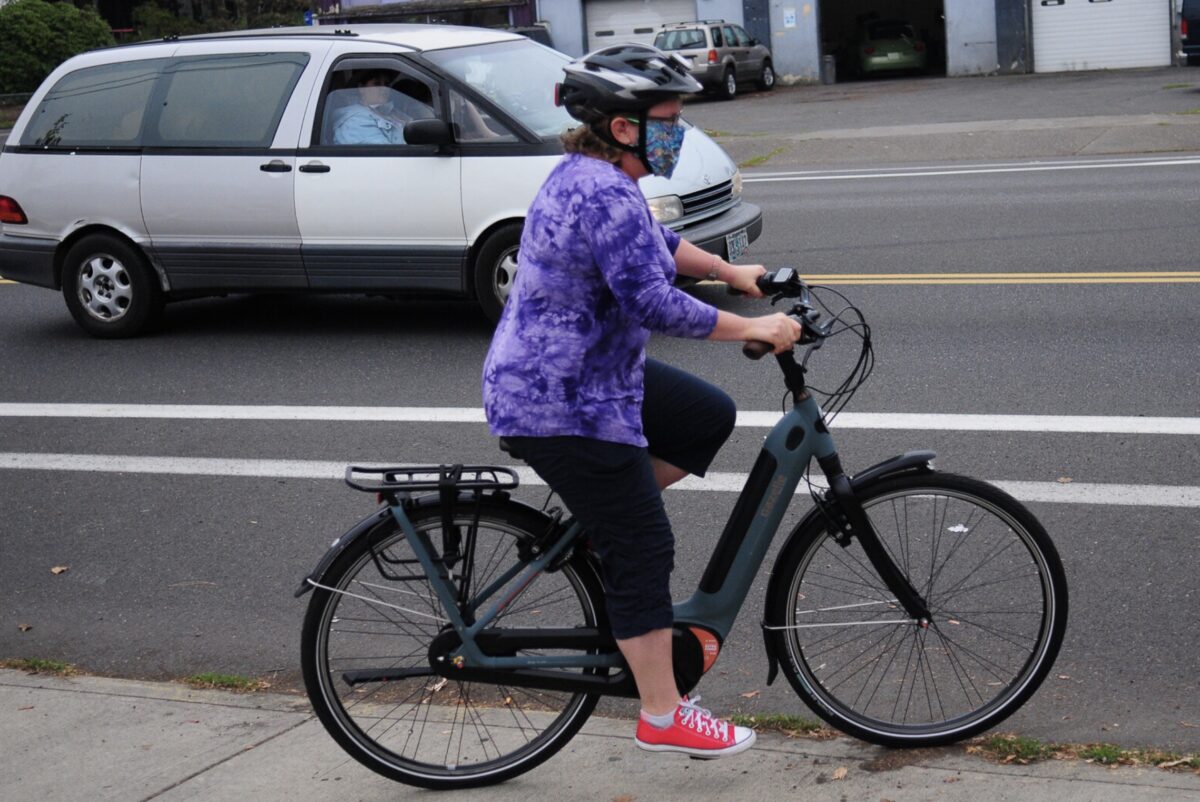 That person in the van is much more likely to become that person on the bike if they had a financial incentive.
(Photo: Jonathan Maus/BikePortland)

Where in North America are people given incentives to buy an e-bike and how do the programs work? Thanks to a new online tracker from the folks at Portland State University’s Transportation Research and Education Center (TREC), you can stay updated on which cities and states are serious about turning the e-bike curious into e-bike riders. 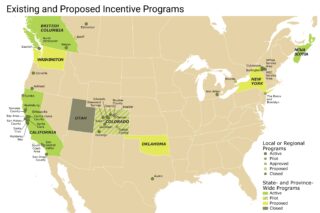 John MacArthur, a PSU transportation researcher and e-bike expert, led the development of the program along with Cameron Bennett, a transportation engineering masters student. We’ve looked at MacArthur’s work on e-bikes before, which has been an influential source too boost the idea that electric bikes are a viable means of transportation.

Something MacArthur’s work has made clear is that the price of e-bikes is a factor that holds people back from buying them, even though they’re far less expensive than their four-wheeled counterparts. A 2019 paper MacArthur co-wrote says that offering incentives for purchasing electric bikes — similar to the ones already available for electric vehicles in many states, including Oregon – would be an effective way to encourage more people to use them, therefore reducing vehicle miles traveled (VMT) in cars: a crucial step to reducing personal transportation-caused carbon emissions.

MacArthur’s 2019 report gives suggestions to governments looking to enact e-bike incentives for best practices on how to do it, which proved fruitful to officials and advocates in places like Monterey, California, where TREC’s research was used to advocate for an electric bike incentive program for low-income residents on California’s central coast.

Other places in North America that have hopped on the electric bike rebate train? Here in Oregon, both Ashland and Corvallis have e-bike incentive programs, which offer maximum rebates of $200 and $1200, respectively.

Ashland’s rebate offer isn’t income-qualified, but it’s small, which is in line with other incentive programs in the U.S. that are accessible to all income groups. Multiple cities in Vermont, including Burlington, offer small incentives of $100-$200. The city of Colchester, VT has a rebate program that only applies to people switching from fossil fuel vehicles to e-bikes, so someone who had been previously using a non-electric bike to get around wouldn’t qualify.

The city of Nelson, British Columbia, is offering a low-interest loan program of up to $6,260, with no income restrictions. This is not in line with the type of rebates available to people buying electric vehicles. But it does address a problem facing the e-bike industry: even though electric bikes are usually much cheaper than cars, the upfront costs of buying an e-bike can be hard to swallow when compared to the kind of car payment plans you can usually get.

Colorado, California and British Columbia are the places in North America with the most statewide incentive programs, both active and proposed. But other states, including Washington, Oklahoma, Utah and New York have also dabbled in statewide e-bike rebate programs.

In total, Bennett and MacArthur have identified 55 e-bike incentive purchase programs in the U.S. and Canada. The tracker also gives details about how much the rebate is, if it’s currently active and who qualifies.

Can we hit the (electric) wheels rolling a little faster here in Oregon? Portland’s U.S. Congressman Earl Blumenauer has been on the frontlines of a national e-bike incentive program, the ‘Electric Bicycle Incentive Kickstart for the Environment’ (EBIKE) Act, that made its way into talks for the now-stripped federal Build Back Better act.

Even if this kind of legislature is never passed on a national level, it would stand to reason that at least the district that elected Blumenauer to Congress – a place once considered “America’s bicycle capital” — could get something like this done.

As it is, Oregon has doubled electric car rebates for lower-income families, but e-bike buyers are still on their own.

Local lawmakers should be inspired by the work researchers like Bennett and MacArthur are doing right in our backyard and see how we’re lagging behind. Meanwhile, learn more about this online tracker and other e-bike research from TREC on their website or check out Bennett’s research poster in the PDF below.

Any county that requires DEQ or smog inspections should also be incentivizing e-bike purchases. Also any county that can justify increasing pavement should be doing the same. Add to that the reduction in parking currently pushed, well what the heck! Let’s go!

Regionally of course it’s good to emphasize that CA, WA and BC all have these programs while OR doesn’t. But more shocking: Oklahoma! Utah!

Washington and OK are proposed, alas, not actually on the books — yet!

The best way to incentivize health would be to close 10% of residential streets to thru car traffic. Residents could still access their homes, etc., just no thru traffic except bikes, walkers and joggers.

We will not see widespread adoption until it is safe to do so.

Vote Up6Vote Down  Reply
« Cycle Oregon is back, will head to Painted Hills on 7-day ride
In pep talk for regional leaders, Blumenauer lays out ‘amazingly good’ federal funding opportunity »