For some, ‘day of service’ means sweeping up bike lanes

Many Portlanders chose to honor Dr. Martin Luther King Jr. today by working to make the community better. For some folks, that meant grabbing a broom and rolling out to a bike lane.

Frustratingly, many of Portland’s major bikeways remain littered with trash, leaves and gravel. Yesterday a Twitter thread that included BikePortland, Cathy Tuttle, Eric Wilhelm, Tony Jordan, myself and others bemoaned the state of Portland’s bike lanes.

Inspired by Dr. King, a few of us got offline and got out into the streets to clean up these messes for ourselves.

With a cookie sheet, broom and a shovel, Cathy got to work near her home at NW Park and Couch. She met another BikePortland reader and a man who lives in a tent nearby and the three of them cleared a through path for cycling through a plaza street and did a lot of work on the SW Broadway protected bike lane near Portland State University.

Cathy inspired me to set out on my own clean-up mission. I started on SW Broadway and cleared the leaves between Oak and Ankeny. Then I cleaned up a bunch of trash and cigarette buts from the northbound bike lane on Broadway between Burnside and Couch. I then rolled over the river and swept away a bunch of gravel on the bike lane on northbound N Interstate and Tillamook. 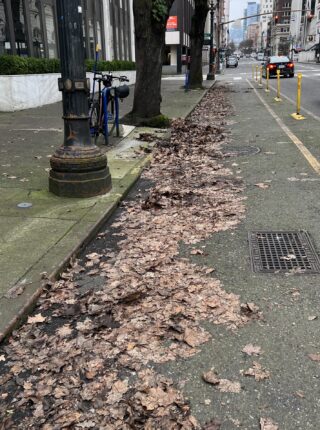 SW Broadway and Oak before. 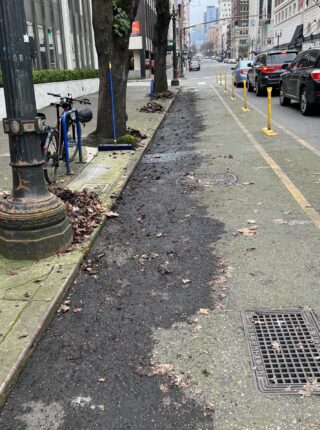 SW Broadway and Oak after. 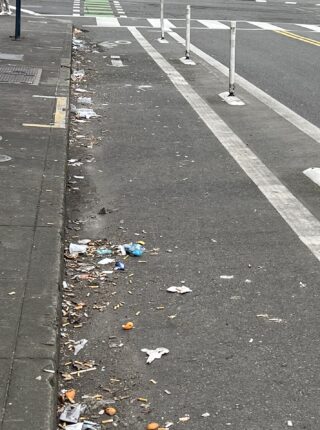 NW Broadway and Burnside before. 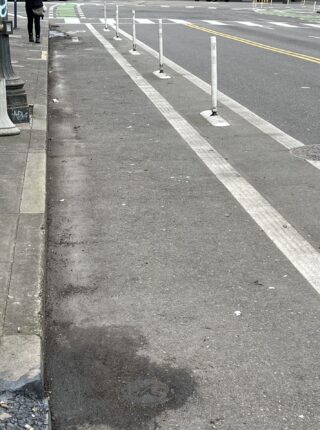 NW Broadway and Burnside after. 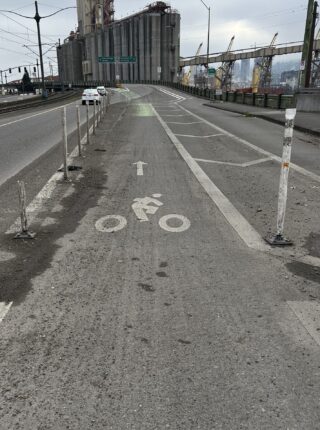 N Interstate and Tillamook before. 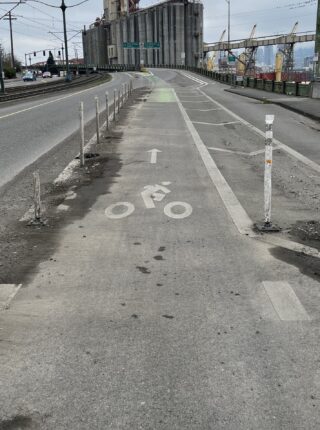 N Interstate and Tillamook after.

I also heard from reader Zachary Lauritzen who swept sections of NE Tillamook west of 82nd and Burnside east of 82nd. “I cleared about 40’ and it was toooouuuuugghhhh,” Zachary shared. “Needs a real street sweeper.”

I can relate to his sentiment. It felt great to clear up a few spots; but we need more help from the City of Portland! It has taken way too long to clean up the fall leaves and gravel from our lanes. And this isn’t a new problem. It has been the same story for many years.

I won’t hold my breath for PBOT to keep our bike lanes clean in a timely matter. Instead what I want to do is plan ahead in 2023 for a more large-scale Day of Service event. Imagine if great leaders like Dr. King sat around and complained when they didn’t like something. The time has long since passed that we need to not just talk about the change we want, but to be about the change we want.

I wonder if we could partner with SOLVE, to get the lanes swept?

During my Saturday ride as I navigated city dumped gravel in the bike lanes, I thought about the things people do to try to make things better. That actully makes cycling better and reflects well on those individuals. Thank you to you all.

Thank you all for doing this.

A clean, beautiful city is what we need if we want to inspire people to walk, roll and bike to their destinations.

Some day, PBOT will once again prioritize transportation operations and will figure out how to keep the streets clean and these sorts of “how can bicyclists maintain the bike lanes themselves through sheer force of will” issues will go away.

I mean, the whole topic is kind of ridiculous, or at least would be in a city that hadn’t basically broken down.

I think the city needs to create some new positions in PBOT to evaluate and then implement a program by which cyclists volunteer on a regular basis to maintain the bicycle system. You know, it should start with a task force, a new logo, and some trips by city staffers to visit faraway places to see how it is done there. A million dollars should be enough to get the program started. A key element should be training for volunteers on how to do it and a licensing program that participants will pay for to make sure they are insured. Think how much of the cost of maintaining the system can be shifted to bicyclists. “The City that’s Woke.”

It was on Sunday not Monday, but here’s a shout out to the people that cleaned up the east side of the Bryant St. Pedestrian bridge too.

I’ve contacted pbot two different ways about the state of the bike lanes near where I live. No response, no action so far, except for my sweeping a couple of blocks of Foster last week. I can confirm how labor-intensive it is. How about we stop dropping gravel that hardly has an effect (on the half a snow day we had) until we have a reasonable cleanup schedule? In years past the average is somewhere in the 3-6 week range.

Oh I take it back, I got this from my second attempt just as I was posting here: “Andrew – Thank you for your submission, it has been forwarded to Transportation Maintenance for response.”

Just from perusing the previous comments the thing I take away is how hard it is for individuals to do most of the cleanup and how easy it would be to use the existing City equipment if they would only deploy it on a regular basis.