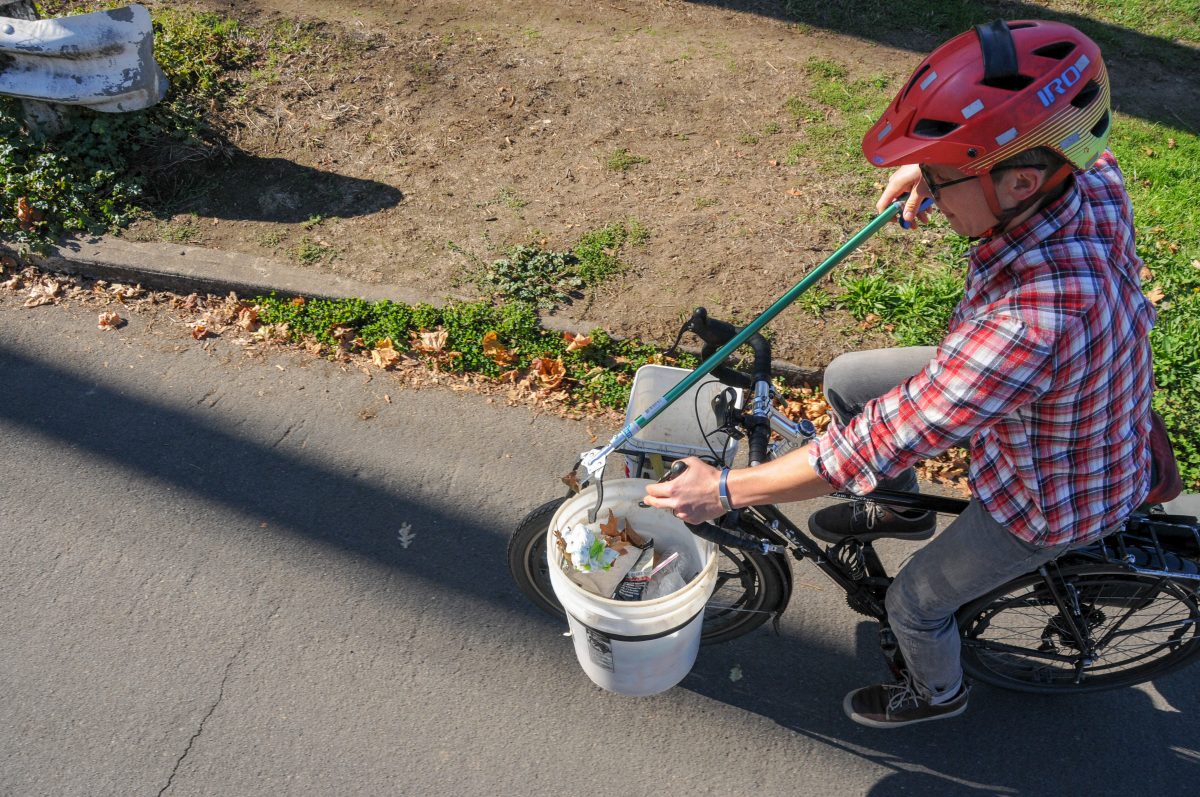 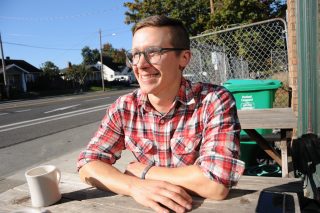 Have you ever looked around as you roll through the streets and thought, “Geez, there’s so much trash everywhere!” I certainly have. And while I’ve often thought of doing something about it, Portlander Danny Dunn has taken action.

Since the end of August, Danny has been picking up trash while he bikes around town. With a simple system of plastic buckets strapped to his front rack and a $25 grabber tool, Danny glides along, making Portland cleaner one piece of trash at a time.

I met up with him in Arbor Lodge yesterday.


Danny moved to Portland with his wife in 2011 so she could attend school at Lewis & Clark College. He told me he first noticed how trashy streets were when when he lived in an apartment next to a vacant lot at SW Barbur Blvd and Hooker Street. “It was disgusting,” he recalled. “There was a ton of trash and the lane was full of awful things.” When his family visited from rural Wisconsin, they complained about it too. “It’s terrible here,” Danny remembers them saying, “Why is it so bad?!”

After thinking about it a while, Danny combined his ingenuity, work-ethic, and admirable sense of civic duty with his very well-used Surly Cross-Check — and a two-wheeled, trash-collecting vehicle was born. 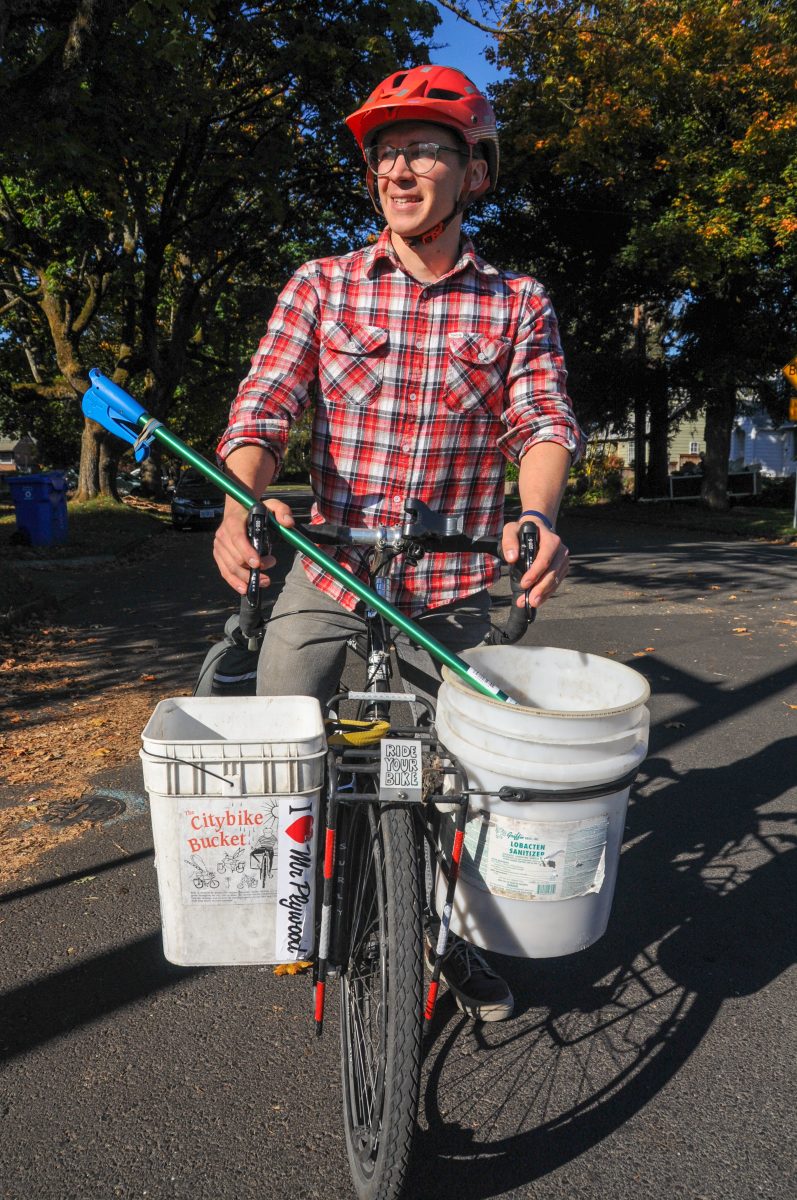 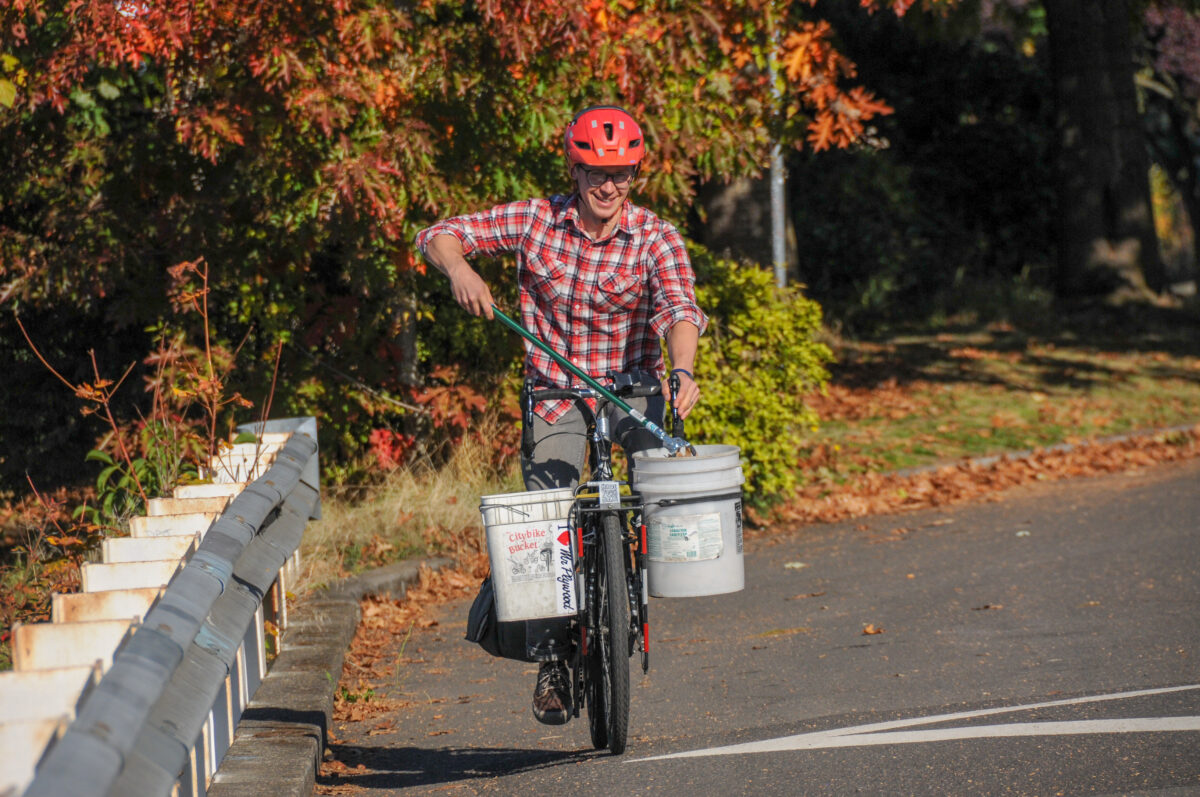 Danny doesn’t have a set route and his collection routine is haphazard. He prefers to work on sidestreets or protected lanes because streets with fast-moving cars and bikes don’t mix well with his ambling and circuitous riding style. He’s also still learning how to use the grabber proficiently. “I don’t look that graceful swerving around, but it’s for the greater good,” he said.

Danny seems like a relatively quiet guy and he’s not looking to start a bike-powered-trash-hauling revolution. But he did let on that he was partly inspired by famed author and comedian David Sedaris, who also has a habit of picking up other peoples’ trash. And like Sedaris, I couldn’t tell if he was joking when he said with a deadpan delivery, “I moved here poor and these buckets changed everything. There’s pre-picker Danny, and post-picker Danny.”

Given how many bicycle riders there are in Portland — and how much trash litters our streets — we can use all the pedaling pickers we can get.

Thanks for your work Danny!

Now, who else is going to buy a grabbing tool and join him?

I love this story thank you for sharing. It’s the little things that we all can do everyday that’s going to make the difference.

This is awesome! I’ve started carrying a bag for refuse on hikes, but haven’t yet tried to conquer our city. Good on ya!

First, thanks Danny! Second, sometimes when I’m on long boring phone call, I’ll wander around the streets in my immediate environs picking up trash. It makes the time spent feel much more rewarding.

And I was feeling so self righteous about using only the smallest trash bin, and only a little guilty about not cutting service down to once a month.

Hey, sorry for digressing for the topic. But there maybe someone deliberately setting up spikes to puncture bicycle tires near or around 30th SE Glisan on the eastbound bicycle path.

I just got one on my way to a meeting and it made it through a Marathon plus tire.

Send this guy down to Eugene, a.k.a trash-town USA. He’ll need more than a couple of bins on a bike.

Very cool story! Thanks for what you do Danny!

For other folks who are interesting in joining a community of trash grabbers (whether by bike or on foot) please check out The Theodores (http://www.thetheodores.org/).

Thanks for your volunteer effort, sir. I appreciate it. On my ride around the city last weekend I was taken aback at just how trashed it has become. The local government cannot keep up with the clean-up needs and the trash seems to be growing exponentially. It is disheartening. I wish we could find an answer that was quick, cost effective and sustainable.

I do the same on my street about every 2 months. Just a short 5 block walk with the family generates at least a full bag of trash. Most of it is left behind by haulers after trash day..

Yeah growing up here, I remember when people would visit they would be astonished at how clean the city was, it definitely was a thing of pride.

Good on ya, Danny! Perhaps there should be a regular monthly ride set up for this sort of thing…

Yes, truly a wonderful thing Danny is doing for his community. I’ve also done the same while riding my bike, but stories like these are always very motivating and inspirational all the same. I hope that someday our societies will evolve in a way where such cleaning up on a routine basis is no longer necessary. By no means are Dutch cities or towns horrendously filthy or exceptionally dirty, but even in my cute little town of Goes, you still see trash on just about every block or corner. Every week or two, I’ll circle the surrounding streets to clean up any litter, but within days they appear again.

Recently, some friends went to Tokyo for a week. They were counting the pieces of litter during that trip and ended up with 7 in total. I only need to bike half a mile to the local supermarket here and would typically have already seen 2-3 times that number. And that’s comparing a town of 27,000 with a giant city of 13 + million people.

Heart warming story of a gentleman that actually cares…

I honked my car horn at a guy the other day as he tossed his McDonalds bag. It’s hard not to get cynical when – just about every day on my dog walk – I see one of these things: someone going through a trash/recycling bin, people smoking pot (or whatever else it is), drinking alcohol in the park, human feces, someone asking me for money, broken car window glass, dog poop, cigarette butts, dumped home goods/trash on the corners, and tents in the park. It’s ridiculous.

We’re the most sustainable city in North American, right…

I’m sorry about the negativity, it’s just so frustrating for me to catch my dog eating human poop because I took my eye of her for one second. And I give the park rangers credit, I seem them out everyday working hard. It’s just that bad.

The roses in Peninsula Park are still very pretty.

>>> We’re the most sustainable city in North American, right… <<<

Where did you get that idea?

INFOGRAPHIC: Why Portland May Be America’s Greenest City
https://www.businessinsider.com/portland-green-city-infographic-2013-3

Portland gets its reward: Most sustainable city
https://www.oregonlive.com/environment/index.ssf/2009/03/portland_will_be_recognized_as.html

The branding is everywhere.

Other sources rank us lower (https://www.mnn.com/earth-matters/wilderness-resources/stories/these-are-americas-most-sustainable-cities)

We also have some of the dirtiest air in the country.

But I agree that, like with our platinum bike status, we’ve done quite well with our branding, even if it doesn’t exactly line up with the day-to-day reality we experience on the ground.

Danny is doing great work. Now if we could only get the army of homeless behind him helping to clean up their trash, this city actually could be spotless.

Really, I should have said that Danny’s doing great work!

Wow, you just stereotyped a bunch of people as uncaring. I didn’t expect such a directly rude comment. People that can’t afford to live in a home are uncaring? People hoping to find their next meal in the dumpster are uncaring? I’m not sure why you lumped all these things together but it’s not very caring of you.

Great! So Danny Dunn’s adventures continued after the Homework Machine.

Blast from the past!

Thanks for cleaning up!

In the great words of Ktesh: See Something? DO SOMETHING!

For anyone that wants to jump start their local cleanup efforts, here’s all you need (buy elsewhere if Amazon is not your thing):

I try to do a bag or two when I have bin space before the biweekly trash pickup. Sometimes more if people have been extra piggish in the neighborhood.

I will never understand the mentality of people who just drop their garbage where they stand. I have a neighbor that throws his fast food trash on the ground in front of his own house! Just drops it out his car window and goes inside. When he comes out he has to look at it the same as everyone else, but he just doesn’t even see it, or something. Does. not. compute…

I would encourage anyone here who actually cares to take action to report illegal dumping wherever you see it in town. Will be picked up in a matter of days. https://www.oregonmetro.gov/tools-living/garbage-and-recycling/rid-patrol

I do this on foot on my rural road sometimes. It’s oddly satisfying and I highly recommend it.