As I hope you’ve learned while reading my posts each week, biking with little ones is a fun and amazing experience; but there are also some safety issues I think everyone should be aware of.

As I shared last week, we’ve been working to improve our family bicycle and traffic safety with improved gear and preparation. The next step is to work through tricky traffic situations with our oldest son, who rides his own bike behind me and will soon be ready to ride alone. Here are the things we’ve noticed on our rides that we are teaching him:

Ride in a straight line
I was surprised to look behind me and see my son weaving and curving in an unpredictable wiggly pattern, as if he’d had a few adult beverages before mounting his bike. This is a constant reminder: riding in the street is not biking play time. We need to ride steady, and straight. (Apparently, for a kid, riding straight takes practice…it’s not obvious, nor an inborn skill, at least not in our family.)

No racing!
This is a natural problem for a youngster, especially if they begin riding with friends. There is a strong temptation to “race you!” or go as fast as possible to a given destination. Nope. This is forbidden, unless we find a specific place to race (like an empty parking lot). It’s a hard rule, but I keep saying it. If you are racing, you aren’t being careful, watching for cars in driveways, or pedestrians on sidewalks, and you might be riding too fast to be able to stop in time, or for a car driver to stop for you.

Note the two-way stop signs
I hate these! I think they are inherently confusing to a new rider, and even a bit tricky for me, especially when parked cars make it difficult to see the not-stopping cross traffic. We memorize all of the two-way stops on our route, and I mention them every single ride. “Here we have to stop, but remember: the cars crossing through this spot don’t have a stop sign. Do they have to stop? (No!) So we have to stop, look both ways, and wait and make sure no cars are coming before we can go through.”

Four-way stops
Whose turn is it? Since my son just follows right behind me, I only recently realized I need to start talking through this conundrum at every four-way stop. I will also draw this out on a sheet of paper and we’ll play with toy cars on the paper sheet, to act out whose turn it is. Another great option is to practice this at a traffic garden, which provides the opportunity to role play and practice different four-way stop scenarios without the worry of real traffic.

Obstacles in the road
Sometimes an object/obstacle will appear in your path without much warning, like a big pot hole or dead squirrel. I remind my son of this: Slow down and look beside and behind you for cars, if you can. Never jerk your bike without looking or swerve into traffic to avoid the obstacle: you could be heading right into a moving car! Slow down, or try to stop, or even run over/into the obstacle. Confronting a pot hole or even a trash container is better than running into traffic. And it’s always better to roll over the dead squirrel, as gross as that may be, than to swerve into a moving car. (Alas, this has happened to us.)

Drivers who “wave you on”
This one is tricky, and I wouldn’t have thought of it, if I hadn’t read about it on BikePortland. Drivers usually stop when they see us — a Mama and cargo bike full of kids, plus a young boy riding his own bike — and they wave for us to go ahead, whether it’s our turn or not. Without much thought, I had always smiled and ridden through, at their hand wave. But other BikePortland parents helpfully point out that this can be really dangerous, as the driver hand wave doesn’t guarantee it’s safe to proceed. Some drivers aren’t aware that there is another lane of traffic that is not stopping, or even cars behind them that may zip around to pass their inexplicably stopped car, oblivious to the bikers and hand-waving situation. At the same time, the hand wave is pretty established, especially at four way stops, and is a common way to communicate. For now, I’ve settled on this explanation for my son: “Drivers are trying to be nice to stop and wave, but even grown-ups make mistakes sometimes. Sometimes drivers might wave for you to go, even when it’s not safe. It’s your responsibility to make sure you can see it’s safe to go. If it’s not your turn, or you’re not sure it’s safe, you wave back at the driver to go. You wait until you know it’s safe. If you are nervous or stressed, or the driver keeps waving at you, you can pull your bike over to the side of the road or up on the sidewalk (or if you are on the sidewalk already, just back away from the curb to show you are not going to cross), then wait until all the cars pass. Then, when you’re ready and you can see it’s safe, you can get back on the road and cross the street safely, when it’s your turn, without worrying about hand-waving drivers.”

Parked cars, (in)visibility and driveway dangers
We ride on a grid of residential streets lined with parked cars and interspersed with driveways. While teaching my son to ride straight and keep to the right, I hadn’t initially thought about how far right he would ride: which turned out to be right next to the parked cars. This presented two dangers: First, he could easily crash into an opening car door. Second, his close riding to the parked cars makes him absolutely impossible to see from the perspective of a motorist backing out of a driveway. The driveway driver can’t see around the parked cars, which obstruct their view, and it’s also hard for my son to see the car in the driveway. This terrified me when I first recognized the danger. As a corrective, we’ve been “taking the lane,” riding more centrally in our lane, so we don’t crash into any car doors, and we improve our visibility–our ability to see cars in driveways that we are approaching, and maybe help them to see us. Still, my rule to my son is: Presume you are invisible. Cars can’t see you. You have to see them.

To further cement this lesson, we did a bit of role-playing: I had my son stand in a driveway with his view obstructed by a line of parked cars, pretending he was a driver backing out of his driveway. I took his bike next to the parked cars, crouched down to his height, and approached the driveway, as I pretended to be him. “Can you see me?” In this way, he was able to see from a driver’s perspective, (which, at age eight, he has never had), that a biker can be invisible. This demonstration helped us to take the time to dissect this common danger on our regular rides, and to improve our preparation and awareness of it. 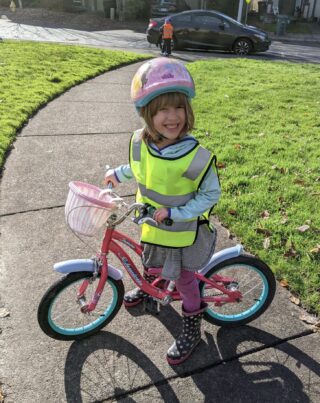 I’ve taught my son that he has to ride slowly on sidewalks and yield to walkers and other sidewalk users. Most importantly, he has to remember the “driveway danger” for every single driveway that he crosses. Cars pulling out of driveways can make sidewalk riding more dangerous than one would think. This can be especially true for little riders that are eager to take off on a new bicycle, scooter, or even a balance bike, and are ready to zoom down a sidewalk as soon as they are given permission. I made this mistake with my three-year-old when he got his first scooter. Now I give careful instructions, (no “zooming!” and “stay right next to me/your older brother”). I make sure my younger son has an older riding buddy for sidewalk rides who can be alert to driveway dangers and stay right with him. I’m still walking or riding along too, but it really helps for my little guy to have someone he is directly shadowing as he scooters down the sidewalk.

These are the things we are working on. Anything other family bikers are doing to improve their safety? What have I missed? Or do you have a better way to teach a lesson or navigate a tricky biking/traffic situation? Leave a note in the comments! We’re grateful to be able to learn from this community. Thank you!

Shannon is a 36-year-old mom of  five who lives in downtown Hillsboro. Her column appears weekly. Contact her via shannon4bikeportland@gmail.com

I wish our infrastructure didn’t require all this, but this is an excellent round-up, Shannon. It was a great idea to get next to that car to help your son understand why it’s more dangerous to stay close to cars. I’ve tried to explain that to adults and failed, so well done.

Awesome post! Brings up so many fond (?) memories of when my kids were first riding independently–having to reiterate things over and over and over (and who doesn’t need that? :)) and saying, “It’s not a race!” 200 times every day. I started out with my kids riding in front of me so I could coach them more easily and then switched to having them ride behind me, trusting that they’d follow and that’s my only difference from you. I love your posts so much!! <3

Totally LOVE your points and photos of The Adorable Ones. We (Vancouver Bicycle Club) run Road Cycling 101 for adults who are new or returning to biking and your points work with our folks, too.

Great to see that you mentioned taking the lane. I’ve spent a long time teaching my son that riding to the right never means closer than the width of a car door to parked cars. I hope that I’ve instilled enough understanding and confidence in that concept so that when a motorist screams at him to get out of the road he knows he’s in the right.

The wavers really, really annoy me. They aren’t being considerate & nice. They’re being demanding. “YOU, there on your bike. GO!” And then once home they’ll go on & on about how cyclists don’t obey the law. ?!

I’ve started to put both feet down & grab my water bottle & take a looooong drink. This riding stuff is hard work. I’m taking a break.