Ridden through the recent fog? Been caught in the dark on a long ride? You need a good light you can count on — especially this time of year.

Earlier this month I shared my take on the Lifeline Pavo Motion 2400 front light, but there are just too many great lights out there to limit it to a single option. This time I want to introduce you to the Giant Recon HL1800.

Giant isn’t a manufacturer you might associate with bike lights but they happen to make one of the best on the market. I’ve been using the previous version, the Recon HL1600, for years but they’ve got an upgrade and it’s even better.

Just to recap, my interest in front lights is specifically lights I think can get you through a night of riding. They need to have long burn times, they need to recharge while shining, they should have road specific beam patterns, and they need to be around 800 lumens at half power. As it turns out, my interest in riding through the night also makes an excellent feature list for riding through the city and never needing to worry about forgetting to recharge.

What does it offer?

Years ago, when the Recon HL1600 light was new it was one of the brightest self-contained lights on the market. As we round the corner towards 2022 the Recon HL1800 isn’t as special when it comes to max power. Even with the additional 200 lumens there are plenty of other options with about the same power.

The Recon is still a compelling product though. The price, with an MSRP of $175, is better than many although I wouldn’t call it a steal. More interesting is that it’s got a longer burn time than most, using a 3400mah Li-Ion battery, and excellent mounting options. The new version added a new trick too. It’s now able to run indefinitely at half power or lower when plugged into an external battery pack.

Turning the light on and off takes a long press. Nothing complicated and it remembers the previous mode you had it in. To cycle through the different modes a single press is all you need and there are five modes available. Hold down the main button again and the light turns off. The simplicity is nice when you’ve been riding for hours and it’s cold and raining.

To mount the light there are two included options. The first is a handlebar mount with a plastic strap. Just wrap the strap around the handlebars and insert it back into the other side. There’s a single hex head bolt that tightens it down. The standard-length strap will easily wrap over your bar tape if you need it to. If you have oval shaped aero bars there’s a swappable extension included. The other mount included in the box is a GoPro mount. Using that one you can take advantage of the vast ocean of GoPro options available out there. Both mounts allow the light to slide off so it doesn’t get stolen.

As a rule, I ignore smart modes on lights. I do not want any adjustments to power and burn time. I want to know how bright it’s going to shine and how long that will last. The Recon HL1800 is an exception. It actually has a smart mode that works exactly the way I’d use the light but it’s automatic.

It uses an ambient light sensor. If it’s daylight out the light flashes. Go through a tunnel and it changes to low. When the light drops and day turns to night it switches to medium power. The flashing mode takes almost no power and doesn’t officially change the medium power burn time. That’s it. It just does what you would have already done and you don’t need to touch the light. 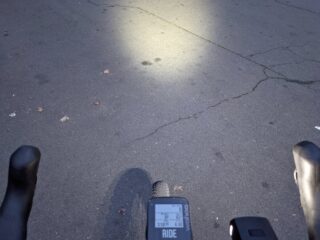 There were a lot of questions about beam patterns last time so I’ll address it right away. Road specific front lights use a concentrated, round, light pattern. So does the Giant HL1800. The specifics of this light are that it uses a pair of LED bulbs sitting next to each other each with their own lens. The pattern is slightly more oval than perfectly round and there is light leak to the sides by design. It’s not a lot though and it’s there for cars to see you, not to see to the sides.

If I’m being nitpicky, I’d say there are lights with more power for the same burn times. The Lifeline from the last article is one. I’m also always going to call out lights that haven’t switched to USB-C yet. It’s a better plug design and especially for a bike light. Finally, it’s worth mentioning that it does have the ability to pair with some GPS devices but check the specs to make sure yours is compatible.

The Recon is a light that just works. It’s got an aluminum housing that feels solid, it’s super easy to mount in a variety of creative ways, and it even has a smart, smart mode. The constant battery information is helpful too. Overall, there’s very little not to like about this light. Check it out on Giant’s website and/or at your local bike shop. Portland Giant dealers include Gladys Bikes (2905 NE Alberta St), Evo Portland (200 SE MLK Jr Blvd), River City Bicycles (706 SE Martin Luther King Blvd), Sellwood Cycle Repair (7953 SE 13th Ave), and Cynergy E-Bikes (3608 SE Powell Blvd).

Josh Ross writes about products and adventures he takes with them. josh.n.ross@gmail.com and @josh_ross on Twitter.

Someone is selling a used one on poshmark for 75 plus shipping. I’m set for lights, but that’s a steal. Someone should buy it.

I would have thought that “Road specific front lights” are exactly the ones that ideally should not use a concentrated, round, light pattern, as it’s hard to have it light up the road a reasonable distance in front of you without also dazzling people coming the other way.

Yes, German standard stvzo compliant lights do not use a round beam pattern, and they more effectively light up the road at a distance without blinding oncoming traffic. I wish the US would adopt the German standard because Busch and Mueller lights are great, even if they can’t compete on a lumen basis with the most powerful lights out there.

Lights designed for mountain bikes need to keep you aware of your surroundings. Road specific lights work in situations where peripheral vision isn’t all that important. A circle of light pointed at the pavement in front of you keeps you aware of what’s coming without lots of light leaking in all directions. Unless you intentionally angle your light up, you don’t have to worry about blinding people.

There’s widespread unawareness of the effect that a particular light or light setting has on nearby people.
*flashing lights aren’t welcome in off-street routes shared with pedestrians
*if you see someone shielding their eyes it’s because you are hurting them

The question is – how far in front of you to point it in order to see obstructions in time to have a chance of avoiding them (when you are using the light to see, rather than be seen) and how wide is the beam that it doesn’t also dazzle oncoming traffic when you point it that far ahead? Personally I’ve found stvzo lights hugely better, and you can very clearly see where the beam cut off is so you can make sure it’s not in people’s faces, and the light is more intense higher in the beam below the cutoff to compensate for the greater spread over the round trip distance to your eyes; it really is a very different, and better, experience. 600 lumens burning a hole in the pavement 10 ft in front of you is not much use at any kind of speed, and you the rider won’t really see much on the ground except for the contents of that spot. If a round beam is narrow enough that you can point it further ahead without dazzling people, you won’t have much peripheral vision at all.

You can see in the images How I like the light positioned. I tend to travel between 17mph and 22mph and that works well for me at those speeds.

I am chagrined that lights these days use lithium batteries. We should be getting away from lithium! And if the lights I finally got talked into getting for my wife and daughter are a valid comparison (cygolite dash), I am told that when the battery goes weak the light goes in the trash. The battery is not intended to be replaced.

I modified an old (o.k. ancient) Cateye light to accept an LED flashlight (so I can use the Cateye mount) that takes AA batteries, and thereby avoid this obsolescence/trash/lithium SNAFU.

It’s a fair point. Personally I’ve not killed any of these batteries but I have no doubt it happens and as far as I know they are not replaceable.

And of course rechargeable NiMH batteries aren’t without their ecological footprint. But the slide toward ever more toxic, exhaustible, short lived, throwaway (high performance) products must be something we think about, resist, recognize as choices as opposed to inevitable.

For a small fee, the battery can be replaced by the manufacturer. I’ve also replaced the cells in similar cygolite metro headlights manually but this required being comfortable opening and sealing the cases.

Lithium ion batteries are unambiguously a better choice than NiMH batteries from an ecological standpoint:

Lithium ion batteries can be recycled these days: https://li-cycle.com/.

Closed loop recycling has been developed and is now becoming available:

If you don’t like batteries, you can always go with a dynohub. It’s a more expensive option, as you’ll need a new wheel, in addition to the light, and you’ll be a bit limited in how much brightness you can get. But it’s nice to never have to remember to charge your lights again, or worry about having enough power to complete a long ride.