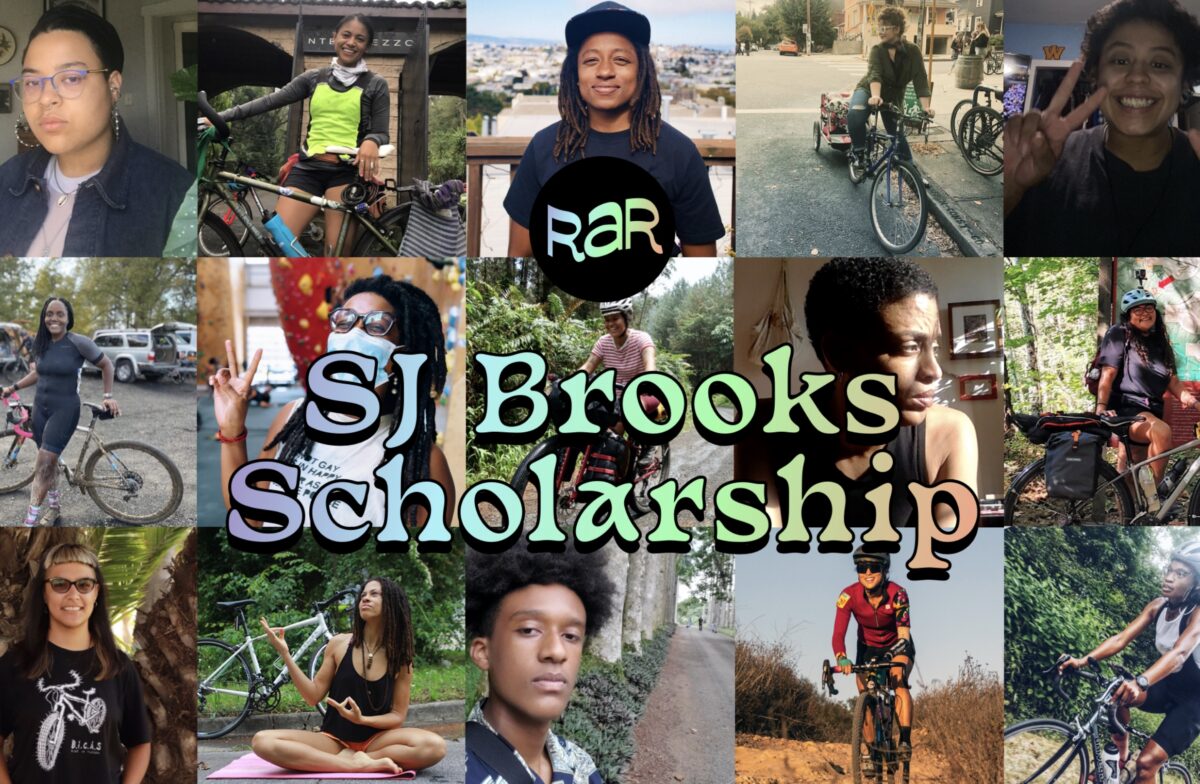 Scholarship winners. Maritza (with her dog Amélie) is on the upper row, 2nd from the right.
(Photo/graphic: Radical Adventure Riders)

Increasing equity and accessibility in the world of cycling is necessary if we want to really create transformative change where everyone can get around on a bike and enjoy all the benefits that come with it.

One great organization that is making waves in this area is Radical Adventure Riders (RAR, formerly known as WTF Bikexplorers), a group with roots in Portland that now has chapters across the U.S. RAR aims to support women, trans and non-binary folks and members of the BIPOC community in the cycling scene. BikePortland’s very own Maritza Arango has been recognized by RAR and has just been awarded a scholarship in the form of an e-bike that will allow her to traverse Portland by bike even more.

Maritza is one of 20 winners, selected from 126 applications. According to RAR, their SJ Brooks Scholarship, “Seeks to increase access to cycling opportunities for Black, Indigenous, and people of color ​​who are trans, woman, non-binary, intersex, two-spirit, and/or genderqueer… the scholarship focused on reducing the financial and material barriers required to pursue a spirited bicycle endeavor, with a focus on self-care.”

Maritza, who moved to Portland from Colombia almost a year ago, has written about inclusivity in cycling for BikePortland before, and her insights clearly made her a great candidate for this scholarship. One thing that is particularly important in Maritza’s biking journey is being able to transport both herself and her service dog, Amélie, around — and as you can imagine, it’s a bit of an ordeal to carry around a large dog in a trailer attached to a regular bike. That extra bit of oomph that comes with an e-bike will allow her to bike with Amélie a lot more comfortably.

Maritza says that an organization like RAR can help people overcome the barriers that prevent them from being the active bikers they want to be. She also thinks it’s important to have a group like this to push back against some of the “macho” tendencies in the cycling community.

Here in Portland, we have the Unity Ride providing a safe place for women, trans and non-binary people to carve out room for themselves in the world of cycling. In Maritza’s article about her experience at one of the Unity Rides, she wrote that “riding a bike can be a political expression of individuals and communities”.

By providing people who have been traditionally excluded from the cycling community with the tools to overcome some of the biggest hurdles, groups like RAR are helping amplify this message and making a radical political statement. Wish Maritza a ‘congrats’ and stay tuned for updates on her journey as an e-biker and service dog chauffeur!

I have also been meaning to thank you for including some of our Vancouver Bicycle Club rides in your Events postings. Last night for our Bike the Lights Ride from Bike Clark County in Vancouver over to PIR, we had several riders who read about it here. I got to meet someone else who is dealing with a TBI from a crash in her family. Connections are good. I probably wouldn’t have met her without your note. That’s a small thing in the big picture, but something good for me from your efforts and I wanted you to know.

BikePortland.org gives me so much information and so many ideas for rides – I really value and use the work you all do. We just updated our membership to support you further.

Oh, this is so fantastic! That’s a really big deal – a new ebike! Cheers to Maritza and Amélie!