Bike the Lights Night at PIR is back! Here’s how to join the fun

Looking for a fun and festive, community-oriented event that’s great for people of all ages and skill levels? Then make plans to roll over to North Portland on Monday night (11/29). That’s when Bike the Lights Night is set to make its triumphant return after a year off due to Covid.

This event is part of the annual Winter Wonderland light show at Portland International Raceway (PIR) that’s been happening since 1993. It opens November 26th and runs through New Year’s Day. Typically it’s a drive-through event where only people in cars are allowed. Folks pile into them and drive slowly through the racetrack to look at all the Christmas-themed displays.

But for one night, and one night only, bikes rule.

We’ve been fans ever since Bike the Lights Night was first held in 2009 and can highly recommend it! It’s so fun to be on the track at night, with all the lights twinkling around you and friends and family rolling around at their own pace. At the start/finish area they typically have booths with snacks and drinks so you can get a hot cocoa, donut, or whatever. 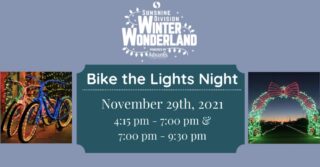 This year there are two group rides leaving from points north and south of PIR. Vancouver Bike Club meets at 5:15 pm at the Bike Clark County shop (1604 Main St) and then rolls over the Interstate Bridge together. The Portland ride will be led by Tom Howe and leaves Irving Park (NE Fremont and 7th) at 6:00 pm.

Riding with a group is a great way to be safe and get those pre-party vibes going. But if you do roll over on your own, I recommend taking a bikeway like N Rosa Parks or Holman or Buffalo west to Denver Ave. Then take Denver north all the way through Kenton and hop onto the path (sidewalk) at N Argyle. When you get to the signal at Schmeer Road, use the beg button to cross at the crosswalk instead of doing the corkscrew on the path under Denver. The crosswalk at Denver and Schmeer will put your just a few pedal strokes from the southern gate of PIR (located at northwest corner of the Denver and Schmeer intersection, right near the entrance to the westbound Columbia Slough Trail path) — which will be open just for this event!

Tickets are $15 for adults, and $5 for kids 6-12. You can purchase them online. All proceeds go to Sunshine Division, a nonprofit that provides food for families in need.

See you out there! Amit Zinman and I will be filming interviews and other fun stuff for a video, so feel free to say hi.

Any idea if the gate from the dike will be open?

Yes, the gate next to the Columbia Slough Trail will be open. From the official Winter Wonderland website: “For those riding their bikes to PIR, the South Gate off Denver Avenue will be open for easy bicycle access.”

Thanks for this detail Tom. I was going to ask about this but forgot to. I’ve updated the post.

I am so excited for this event!!

Are e-bikes banned from this event? Appears yes per website – i.e. “motorized vehicles” not allowed? Seems like they should simply request a 20 mph speed limit and allow all bikes. However maybe they won’t enforce an e-bike ban.

“Bring the family to a fun night dedicated to bicycle riding and the bicycle community (no cars or motorized vehicles allowed on track). Please no strollers, walkers, scooters, or roller bladers for safety reasons. Helmets required on children 16 & under (including passengers in bike seats and trailers), and highly encouraged for all other ages.”

“motorized vehicles” in this context (and in most contexts) refers to cars and trucks. E-bikes are absolutely OK. But if someone has a Class 3 bike and is using the throttle to go too fast for the conditions, they might get asked to leave. It’s important that folks ride slowly because the track is dark (in order to see all the lights!)

Vote Up1Vote Down  Reply
« The Monday Roundup: Waukesha driver had a record, no ‘accidents’, the case for carfree, and more
Battery-boosted ‘Friday Night Ride’ gets its due »