“Narrow residential roadways” come in different flavors—unpaved, unimproved, poorly paved, well-paved—and most, maybe all of them, don’t have sidewalks. As defined in Oregon statute (ORS 801.368) they are less than 18-feet wide and the speed limit is set lower than on wider residential streets. In the competition for safety funding, NRRs don’t have a high priority because they aren’t wide, high-crash corridors with posted speeds above 35 mph. But there are hundreds of NRRs in Portland, and when looked at in total they form a critical component of how we get around. Many of them need a small improvement, like a chicane, or speed bumps, to truly become places that people feel comfortable walking and rolling.

We need creative, inexpensive designs to reassert the right of people walking and rolling to have a place in the right-of-way.

I say, let’s take a page from the Portland transportation bureau’s pandemic response, their Safe Streets – Healthy Businesses program (which brought sidewalk and street dining to restaurants), and activate neighbors to improve these narrow streets themselves. PBOT already allows residents to paint their streets and close them for block parties, why not let residents select an appropriate treatment from a slate of low-cost PBOT designs, apply for a permit, and install it. Realistically, it is probably the only way to scale-up improvements to these low-priority streets, citywide. 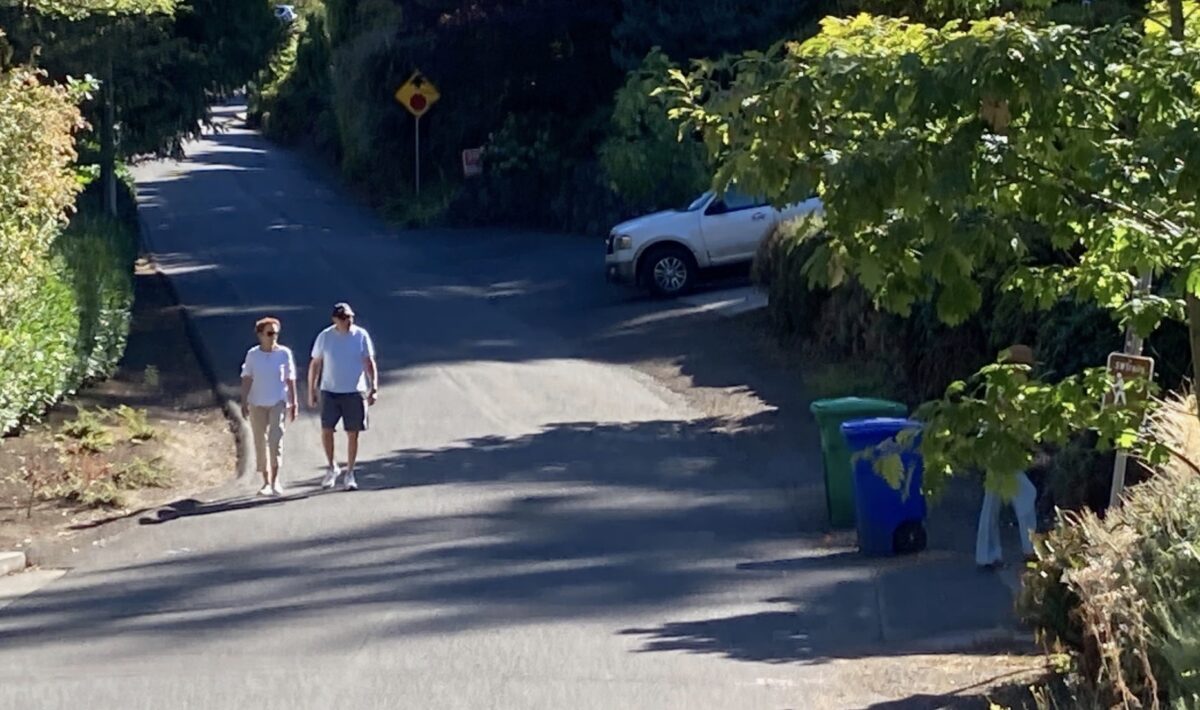 A couple walk along SW Burlingame Ave, a candidate for traffic calming. 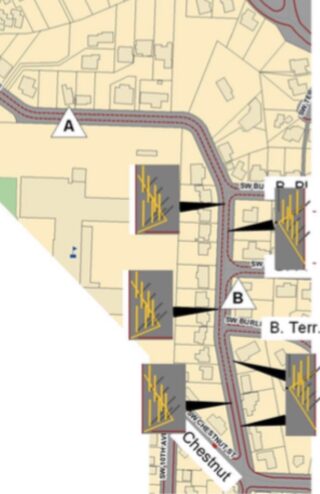 Design for a chicane on SW Burlingame Ave.
(Source: PBOT report on project submitted by neighborhood.)

For example, in the Hillsdale neighborhood, SW Burlingame Avenue neighbors have clamored for traffic calming for two decades. Although narrow, Burlingame runs along Ida B. Wells High School, and connects Beaverton-Hillsdale Hwy to Barbur Blvd. Drivers speed along it. The street was the subject of a PSU student’s Capstone project, and the student’s design (at right) was reviewed by a PBOT engineer. My understanding is that Burlingame Avenue is currently on a PBOT short list for traffic calming, although I don’t know if this would be the design. In the spirit of improving our city, I’m going to use this project as a paper tiger.

As you can see from the graphic, this design relies on a large burden of plastic wands. According to the reviewing engineer, each one of those wanded wedges requires a yield sign—in each direction! Additionally, each wedge should have an advance “road narrows” warning sign, although given “current low speed and volumes,” a “generic warning north and south of the test site” could be used. The price tag ends up being around $8,000.

That’s a lot of signs and plastic for a little street. 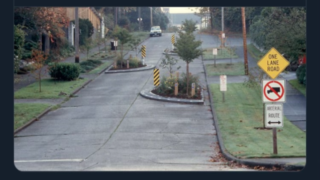 Chicane created from street plantings in Seattle. (Photo source: the the Queen Anne Greenways and Pushing the Needle twitter feeds)

Instead (and in the spirit of thinking outside the box) I imagine the clever designers at PBOT drawing up five or so inexpensive treatments for various street scenarios. A treatment could be as simple as a basketball hoop on the side of the road, or as elaborate as the chicane created from planters in the road (at right). Neighborhoods could apply for a permit to calm their narrow street, and select a PBOT-approved design. The process could include having the approval of some percentage of the residents. Grants could be available for neighborhoods which need financial assistance with materials. 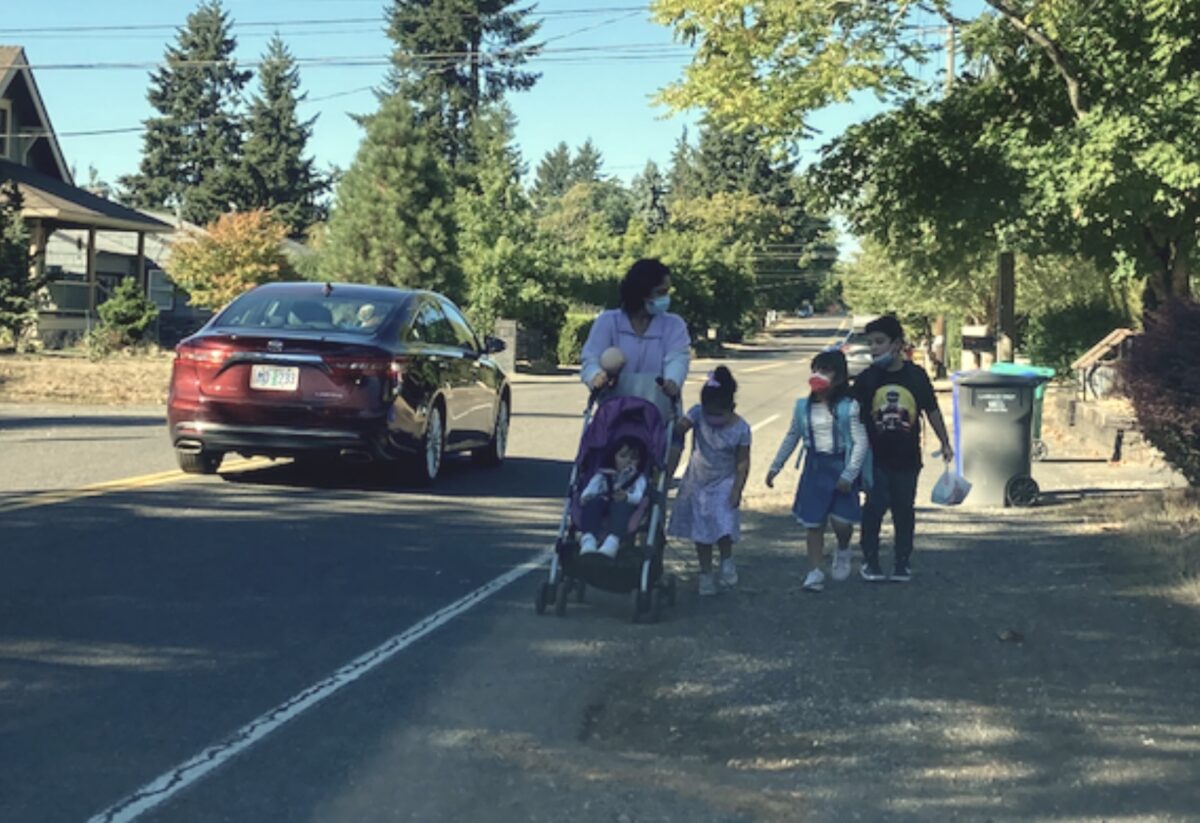 Maria and her four children walk home from the school bus stop.

People have noted that southwest and east Portland face similar infrastructure inadequacies, and that is true. But I have yet to see a street in east Portland where I thought I might bump into a Hobbit, the way I often feel when I am in the Multnomah neighborhood. So a few weeks ago, I spent some time on 117th, between SE Market and Stark.

I didn’t measure the road, but it seemed narrow. I met Maria, who walks the roadway every weekday to pick up her two eldest children from the bus stop. She told me the road was awful to walk on and that “cars drive too fast and don’t slow down” for her. Unfortunately, that’s not surprising. Everything about this road tells the selfish driver that it belongs to them. As I stood on the shoulder a driver honked at me, maybe it was a warning honk, but it was loud enough to be a “why are you breathing my oxygen” honk. Nothing about the street says that Maria has a right to be there too. She deserves a promenade, or at least a row of trees, but that is a bigger project than a group of neighbors can support. We need creative, inexpensive designs to reassert the right of people walking and rolling to have a place in the right-of-way.

The statutory speed limit for a NRR is 15 mph, but Portland Ordinance 188774 directs PBOT to post non-arterial streets in residence districts at 5 MPH slower than their statutory speed, which would be 10 MPH. As we’ve urged before, they should do that.

When it comes to a relative easy way for us to address Vision Zero, give Portlanders a stronger connection to their neighborhoods, and create more people-centered streets — narrow residential roadways are Portland’s low-hanging, live-saving, fruit.

SE 117th from Burnside to Division is a collector street, not a local residential street (the NE portion on the other hand is local, full of gravel and potholes on some of it). PBOT traffic engineers were told by neighbors as recently as 1997 that they didn’t want sidewalks – and as you know, the engineers hold all the money at PBOT. SE 117th north of Stark is in the Hazelwood NA; south of Stark to Division it’s in the Mill Park NA. SE Harold in Powellhurst-Gilbert, SE Main in Centennial, and NE San Rafael in Parkrose Heights Russel are similar streets.

Ord 188774 applies to non-arterial streets in residence districts, that includes collectors. I just checked on google streetview, this section of SE 117th, just north of Market, is posted 20 mph.

If it is close to 18 ft, but say a little over, PBOT could narrow the street to 18 ft with white paint, or a curb, and post it all the way down to 10 mph. 122nd is just a couple blocks away, so someone who wants to travel faster can take that street.

Local residents hate 122nd as it is a high-crash corridor and use parallel streets like 117th and 136th because they are perceived as safer for car drivers. But I agree, pass-through traffic should be using the main streets and not collectors – on the other hand, PBOT and the neighborhoods want road diets and traffic slowed on 122nd too.

Yes to 10 mph! Yes to NRRs! Yes to inexpensive ways to slow drivers and, more importantly, foster people streets! Let’s stop pouring concrete everywhere (or, saying we can’t afford to do so), and instead use our ingenuity and resourcefulness to create a built environment people can enjoy in peace and community.

Thank you for writing this.

I’m a little confused. How does the role of sidewalks/no sidewalks play into this conversation? Is the suggestion that no sidewalks are better because the road is less improved, the road is likely narrower, pedestrians are more often on the road, and therefore traffic should be slower?

My concern is that unless traffic is slower, pedestrians should not be (or should be concerned about being) on the roadway. I don’t think pedestrians using the roadway should be relied upon to encourage drivers to go slower. Which comes first – slower traffic or more pedestrians? The old chicken and egg problem.

I know there was more to the article than this point, but I was interested in clarifying this detail.

Thank you for writing. It’s not really a chicken or egg problem.

Currently, today, tomorrow, and yesterday, people in SW and East Portland have to walk on the side of the road without a curb or cement sidewalk. It’s already that way, and it is a dangerous situation in many places.

“No” as in none on either side.

Personally, I believe if there is not a safe place to walk, or a convenient alternative route, the speed of the street should be lowered. Ord 188774 *requires* that the city lower the speed by 5 mph on all non-arterials in residence districts, that is what the successful “20 is plenty” campaign was about. But they aren’t fully implementing it on collectors in residence districts, and those are the most dangerous streets in SW.