It’s official: Bike Loud and The Street Trust are partners 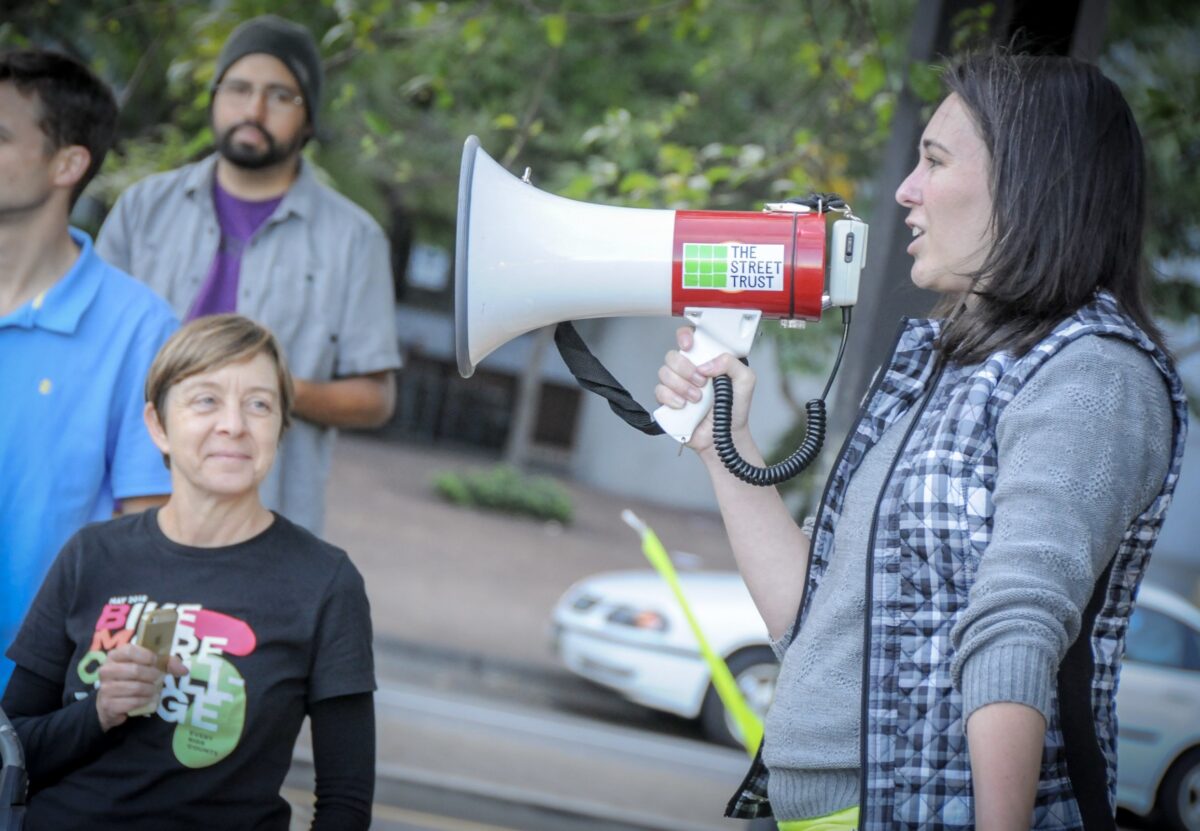 “As Bike Loud PDX continues to grow, The Street Trust made a very generous offer to fiscally sponsor our organization.”
— Bike Loud leadership

The Street Trust is now the fiscal sponsor of Bike Loud PDX and several of its leading volunteers are on the larger organization’s board of directors. The relationship allows Bike Loud to accept grants and tax-deductible donations through The Street Trust while its federal nonprofit status is still pending.

It’s an interesting and natural evolution for the local streets advocacy ecosystem since Bike Loud was initially formed by activists who were concerned that The Street Trust had become too quiet.

The Street Trust began (as the Bicycle Transportation Alliance) in 1990. While they came to prominence as a scrappy group that sued the City of Portland (and won), they settled into a more conservative style of advocacy around 2010 when they hired Rob Sadowsky. In 2012, after The Street Trust was publicly criticized for being lap dogs by their own founder Rex Burkholder, Sadowsky shared on BikePortland that he, “doesn’t criticize loudly,” and that he prefers backroom diplomacy over big public rallies. In an in-depth report on The Street Trust we published in 2014, as Portlanders grappled with a loss of urgency and interest around cycling, Sadowsky clarified his style: “I could go scream at [former PBOT Commissioner] Steve Novick and I could go get 1,000 postcards or phone calls, but that’s not going to help me the next time with Steve Novick,” he said. “I’m not going to lock my neck to City Hall with a u-lock.”

Eight days after Sadowsky shared that comment on BikePortland, a group of cycling activists decided it was time to create a more assertive voice and Bike Loud PDX was formed. They connected through the BikePortland comment section after someone asked, “Who’s a cycling equivalent of the Tea Party?”

Bike Loud filled a huge void in grassroots bike activism in Portland. Their ascendance had a nearly immediate and positive impact on cycling in Portland. They earned respect from City Hall and still maintained a good working relationship with The Street Trust. Last month we shared how Bike Loud is moving into a new chapter and it turns out The Street Trust is making that growth possible. In addition to the fiscal sponsorship, two Bike Loud volunteers (the group has no paid staff) — Hami Ramani and Paul Buchanan — are now The Street Trust board members.

In an email today, Bike Loud leadership referred to themselves as, “One of a constellation of advocacy organizations pushing our state and local electeds and agencies to do more to address the increasing traffic violence on our streets.” “As Bike Loud PDX continues to grow,” the statement continued. “The Street Trust made a very generous offer to fiscally sponsor our organization as a stepping stone to Bike Loud becoming its own registered non-profit. Funds raised through the fiscal sponsorship are currently being allocated to our new Bike Loud Chapters.”

Catie Gould is a former co-chair of Bike Loud. She shared via email today that she’s excited for what a stronger partnership with The Street Trust can do for the group. “I think a lot of people want to get into activism because they want to change things on the street, and not figure out how to set up bank accounts and document donations properly,” she said. Asked if she thinks the cozier relationship will quiet Bike Loud’s voice, she said, “I’m not very concerned about it driving what Bike Loud does. I’d say our “loudness” is much more of a product of who’s volunteering at the time and what they want to work on… The advocacy landscape is always shifting… Certainly, we didn’t see eye to eye all the time, but the Street Trust has been one of the more reliable partners for us over the years. We’ve co-hosted events together, so this isn’t totally out of left field.”

Gould acknowledged that having access to more funding could complicate Bike Loud’s work, but overall it’s a necessary step. “I’ve always been nervous about making that change, and how it might change the power dynamics, but running off of volunteer energy is challenging in its own way… so I’m excited to see what they’ll do next, and glad they have more resources and support than when I started.”

If you want to support Bike Loud with a tax deductible donation, you can now write out a check to “The Street Trust” and put “Bike Loud” in the memo line, then mail it off to 618 NW Glisan Street #203, Portland Oregon 97209. To volunteer with Bike Loud, visit subscribe.bikeloudpdx.org

Woooo…is this the ‘peanut butter meets chocolate’ moment or the BTA gets renewing PDOT grants moment? Tune in…

“The Street Trust is now the fiscal sponsor of Bike Loud PDX and several of its leading volunteers are on the larger organization’s board of directors. The relationship allows Bike Loud to accept grants and tax-deductible donations through The Street Trust

while its federal nonprofit status is still pending

In most cases, this is a temporary relationship. I wouldn’t read too much into it. Most likely Bike Loud is about to accept a grant or government funding and need the temporary fiscal sponsorship until they get their own 501c3 status, and the IRS is still behind on their paperwork processing.

When we had the conversation earlier in the BikeLoud days some of us decided we did not want to meddle advocacy with money. I saw from the BikeWalkPAC days that it was usually money over activism, which is why that older version of BikeLoud shied away from “organizing” into a non-profit. For the people in the group at that time it was a reasonable decision. Now that BikeLoud has new leadership and new members they can decide whatever they want to work on or organize into. So this could be a good move, yay bikeloud for keeping the candle burning.

However I would like to point out that the leadership at the top of BTA needs to turnover. IE Kimberlee Stafford needs to go. She’s had a long enough time at the helm, who should just step down on principle: it’s somebody else’s turn.

She is an attorney who is too risk averse to lead Portland into a new future of bikes. No attorney has the chops to do this work because they have a higher power on top of them and that will always be the Oregon State Bar Association. So yeah Rob Van Brocklin should also resign from the Oregon Transportation Committee.

I for one am tired of Oregon attorneys leading us into the worst congestion problems on the west coast. Attorneys do not have the educational nor academic background to figure out local transport solutions and they will always be beholden to the OSBA and money interested corporations. There are some real nice attorneys working for bicyclists but its a drop in the bucket compared to the money hungry shark attorneys that tend to get involved in transport planning.

There’s still a lot of inherit racism occurring in BikeLoudPDX leadership team.I don’t think the leadership crew has adequately handled the racism, censureship and exclusionary nature of this group. Getting a large funding source, not being transparent about that funding source makes me think the group is using money to squash dissent.

That’s why they cleared the website photos of all the other really loud activist they shut out of the group. Especially Emily Guise. Having trained her on media relations , well to have her oust me from the group over censured language and editing. Until the entire leadership crew gets replaced I’m a meh. They sucking a lot of activism away from Salem where we need state wide changes over lots of little improvements.

That’s why I’m a little hesitant. Both Street Trust and now Bike Loud are too timid and shy with donor source money that probably has its own agenda that doesn’t include healing past censure ship.

I will support the right to organize but BikeLoud has a long way to go before they are seen as ‘inclusive’ and actually following their own rules of engagement.

Vote Up0Vote Down  Reply
« Family Biking: Bikes and kids and rain, oh my!
The Hawthorne Bridge bike counter is down, but not out »