PBOT will smooth out notorious, bumpy rail crossing in the Pearl District

Two sets of uneven crossings on NW 9th, a key connection from Naito into the Pearl District, will be leveled out.

On Monday, City of Portland crews began a project to smooth out a very bumpy section of railroad tracks in the Pearl District. Many bike riders are familiar with the dual rail crossings on NW 9th between Naito and Overton (map). They’re hard to forget because of the jolt you feel when cycling over the large cracks that have formed next to the rails, not to mention the uneven positions of the rails themselves.

All this week, PBOT and the company that owns the railway will work to regrade and repair the crossing, “to make it easier for all users to safely cross.” PBOT Capital Projects Communications Coordinator Hannah Schafer told BikePortland they don’t plan to add any new features to the street during at this time — which is currently a shared lane without a dedicated bikeway. “The surface has really degraded over time and this repair is intended to smooth things out and get everything level again,” Schafer said.

This project was very “surprising and welcome” news for Pearl District neighborhood advocates, one of whom told us they’ve been asking PBOT to fix this crossing for years. Pearl District Neighborhood Association Planning and Transportation Committee Co-Chair Reza Farhoodi said this rail crossing is among the worst in the city for people riding bikes and scooters.

“This project will fix one of the most notoriously deficient rail crossings in the Central City and create a safer and smoother experience for people walking, biking and rolling at this important gateway into the neighborhood,” Farhoodi wrote us in an email this morning. “While we regret the unfortunate circumstances by which this project was implemented, the hope is that there will no longer be any serious injuries at this rail crossing moving forward.”

That “regret” Farhoodi mentions is a very serious injury crash experienced by an electric scooter rider at this location in October 2019. According to the Portland Police Bureau, a 65-year-old man hit these cracks and fell to the ground while riding a rented Spin scooter. When officers arrived, the man was unconscious and was ultimately transported to the hospital in critical condition.

Farhoodi also says there are “exciting” plans on the table for a future bike lane connection across the tracks. 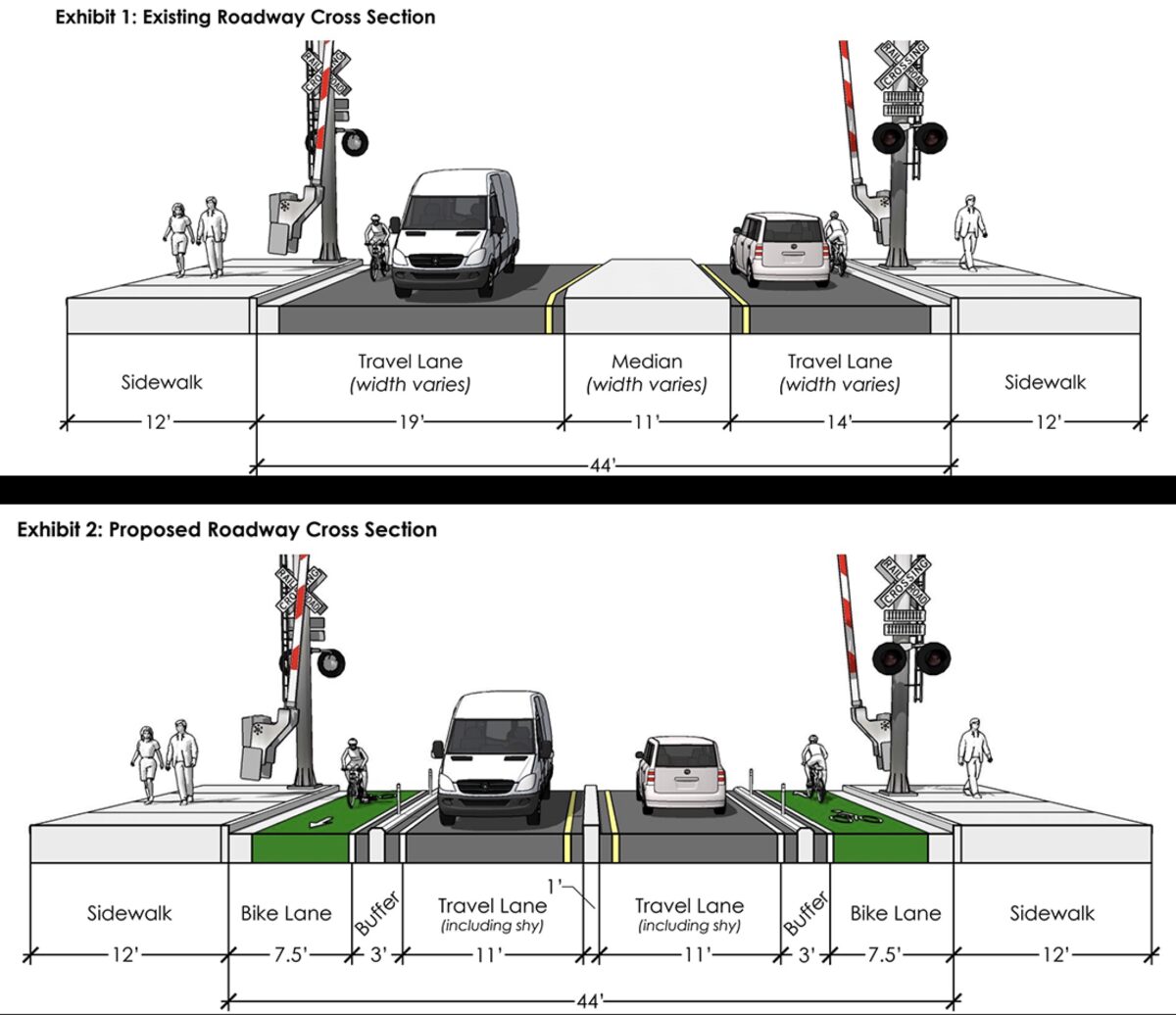 Before/after of a plan for bike lanes at this location. (Source: Kittelson & Associates memo, September 2020)

According to a project development memo (PDF) dated September 2020 and sent to a PBOT project manager from engineering consultants, a separate project is in the works that would remove the existing median island to make room for protected bike lanes on this section of 9th between Naito and Overton. Here’s an excerpt from that memo:

The conceptual design relies on the opportunity to reconstruct the median located on the northeast and southwest sides of the railroad in order to free up space for bicycle facilities within the existing curb-to-curb cross section.

As part of the roadway reconstruction, the cross section is proposed to be restriped to include two 11-foot travel lanes (including one-foot shy distance from curbs), two 7.5-foot bike lanes with 3-foot buffers including raised concrete delineators with flex-posts, and a 1-foot center median island. In constrained locations, the buffer may be required to be reduced; however, the 7.5-foot bike lane is proposed to remain throughout the project extents.

Here are two more sketches of the proposed project:

This $473,000 (estimated) project would also tie into planned buffered bike lanes on 9th south of Overton to connect to the existing bike lanes on the NW Lovejoy ramp up to the Broadway Bridge. Farhoodi says he expects this to be built in 2022 along with the NW Overton Neighborhood Greenway project as part of the NW In Motion plan.

PBOT’s Schafer said while they have a concept designed for this crossing, “At this time we do not have specific plans or a schedule for when it might be implemented.”

It’s a shame that this future expensive fix to the median is required, given that it was built less than ten years ago that the median was built (see Google Streetview, prior to construction of the current median). Even though that was prior to planning work on Central City in Motion / Northwest in Motion, the need for connections between the existing bike lanes on Naito and the Neighborhood Greenway on Overton should have been considered.

I wish this lack of foresight was in the past, but we still see it today. The 70s Neighborhood Greenway, for example, will include concrete curb extensions on Holgate that will make it easier to cross Holgate at 79th/80th. That’s great… except that they will have to be removed if the Middle Holgate Bikeway in the TSP is ever built. And that added expense makes it less likely that that project gets built.

Whoa. Tell me more about this Middle Holgate Bikeway. Is there a project page somewhere?

I don’t know much about it, but it’s included in the Transportation System Plan as a Year 11-20 investment. The location is Holgate Blvd, SE (52nd – I-205) and the description is just “Design and implement bicycle facilities”. There’s also “Holgate Blvd Corridor Improvements”, “Inner Holgate Bikeway” and “Outer Holgate Ped/Bike Improvements”, which if all build would create bicycle improvements all the way from McLaughlin to 136th.

You can view an interactive map of all TSP projects here. Under the layer list you need to turn off “Traffic Classes” and turn on “TSP Projects” (or whatever you want to view).

I ride this almost every day. There is no good route through. I’ve tried to pick the most pleasant path, and they’re all subpar. This is an appreciated change.

Appreciated change for sure. I’ve popped a tire here and on a separate occasion had my handlebars go out place here.

It’s a shame that PBOT can’t identify and utilize these opportunities to repair (especially with railroad crossings) the longer-term vision for these crossings. I would imagine the cost would be a minimal addition to the repair work and would save a whole new repaving and coordinating with RRs project in the future…

Maybe they will implement it within the next 10 years?

The tracks downtown and in the Pearl are such a hazard and PITA. The thing about tracks is that even a moment’s inattention is all that it takes to go down. And when you fall, it is so sudden – the bike just seems to drop right out from under you. Although I haven’t fallen on tracks in this particular area, I did fall on tracks in Midtown Sacramento, and it was one of the most painful falls I’ve ever had.