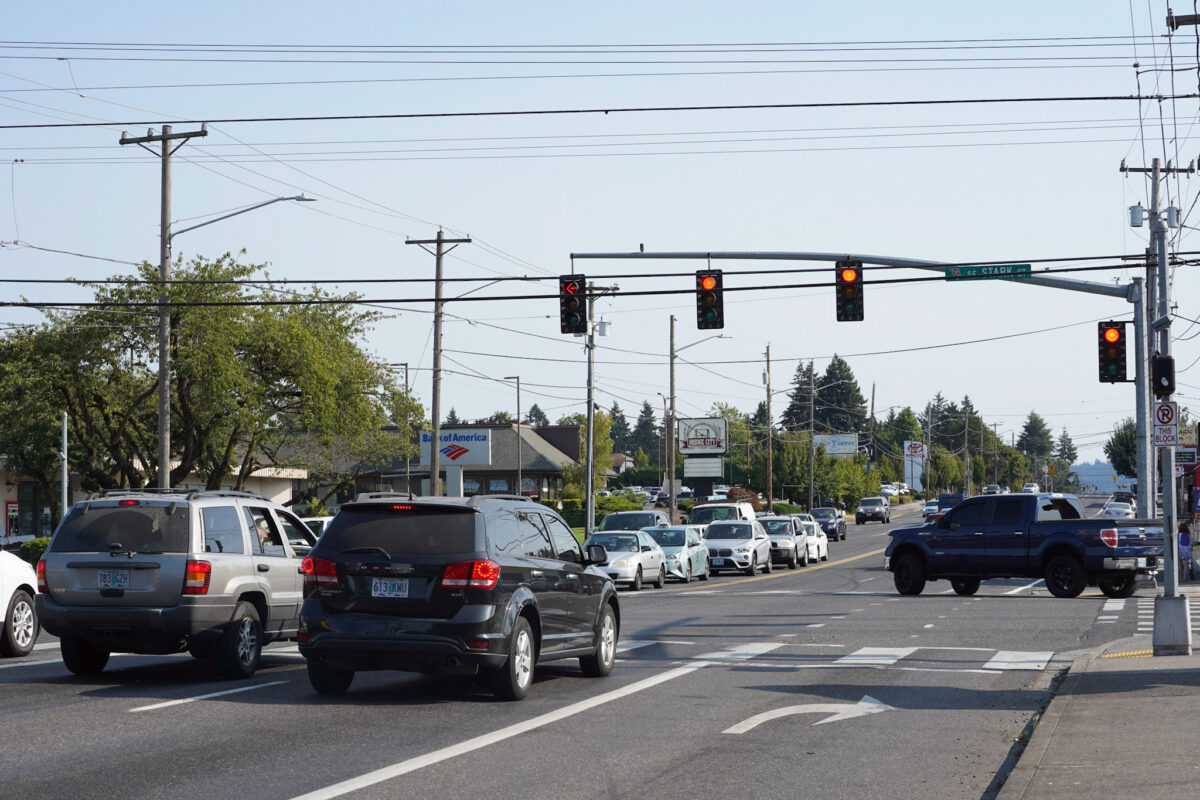 It’s been nearly three years since the last one was installed, so we’re happy to report that the Portland Bureau of Transportation is getting back into the the photo radar camera business.

PBOT has two more cameras are coming this fall. The locations are on one of Portland’s most dangerous stretches of Southeast Stark Street — 122nd and 148th. Adding to the excitement is that these will be the first cameras since the program began in 2016 that can issue citations for both red light and speeding violations.

The use of what PBOT calls “fixed speed safety cameras” has been a huge success, but due to a variety of reasons the roll-out has been glacial. The Oregon Legislature endorsed the use of the cameras in 2015 and since then PBOT has installed just eight of them at a mere five different locations citywide. This is despite the cameras being politically popular and supported by a majority of the public (even, according to PBOT, in focus groups of Black, indigenous and people of color). 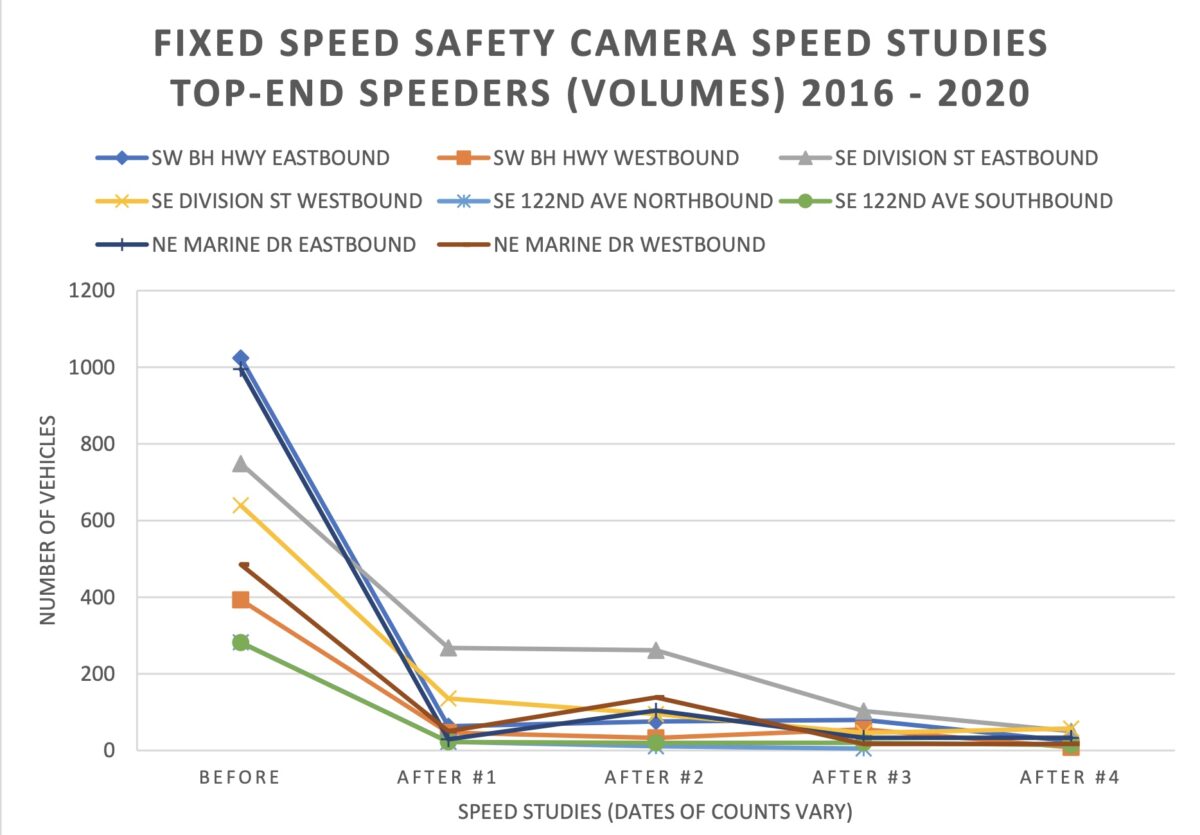 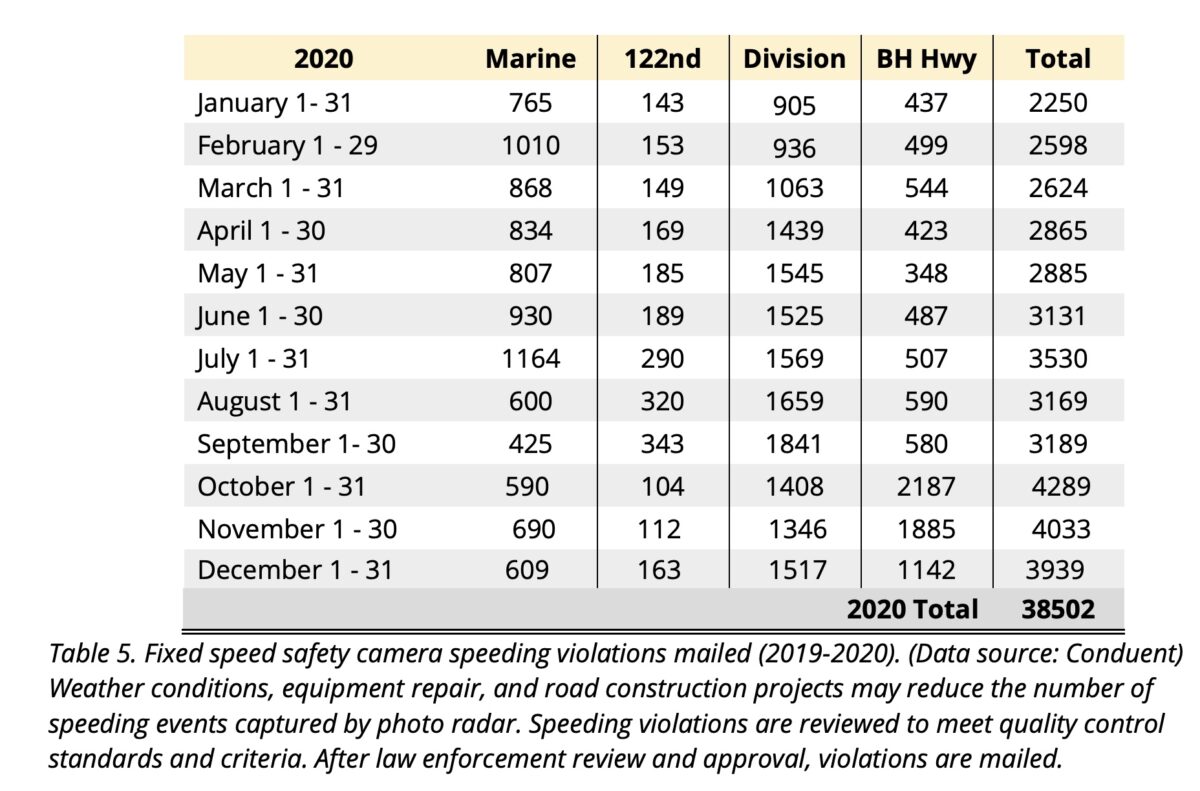 Speeding is pervasive on our streets and it poses a dangerous double-threat of inadequate enforcement and broad cultural acceptance. Automated enforcement via cameras is the way to stop it. Since 2016, across all locations in Portland where cameras are currently in use, people driving 1 mph or more over the posted speed limit has dropped 71%. People driving 10 mph over the speed limit has dropped a whopping 94%.

Not only do the cameras change behaviors, some of the revenue from citations goes back toward street safety infrastructure. In the past two years data is available (2019 and 2020), the cameras resulted in 132,513 cases filed in Multnomah County Circuit Court. Fines range from $85 to $500 (most are $170) and about 70% of the total revenue generated goes to the State of Oregon General Fund. What’s left over is split between ODOT and local governments. In Portland, after costs to operate the system (about $180,000 per year for the last two years) are paid out, the remaining amount goes into a fund to pay for improvements on PBOT’s High Crash Network of streets where an above average number of people are hit and killed.

Back in June, PBOT Commissioner Jo Ann Hardesty (an initial skeptic of the cameras who’s now an ardent supporter) won a $450,000 budget amendment aimed at fighting our, “crisis of vehicular violence.” PBOT also recently renewed a five-year, $15 million contract with the third-party company that owns and operates the cameras. The new contract allows PBOT to install up to 20 new cameras.

The new cameras on Stark at 122nd and 148th can’t come soon enough. PBOT data shows that from 2015 to 2019, 198 deaths or injuries occurred at these two intersections combined. Learn more about speed cameras on PBOT’s website.

Yeah good news I guess… but how about enforcing license plates on cars?

More than half of Teslas seem to lack front license plates.

There are also the tinted license plate covers. Those should be illegal if they aren’t already.

Simple everyday rules don’t seem to apply to everyone.

Exactly; anyone driving without a license plate should get a big fine (with the possibility of having it canceled if the problem is addressed within a defined time window).

I applaud the addition of these cameras. We need dozens more like them. With navigation apps like Apple maps, Waze and Google maps providing warnings about the locations of fixed cameras, it seems to me that mobile, moving enforcement cameras would be better than fixed cameras. But these are still quite useful. And the more we have, the more effective we will be at instilling a culture of safe driving habits.

And of course, as others have stated, ticketing and impounding unregistered vehicles should be number two on the priority list, right after obtaining more speed cameras. But I’m not going to hold my breath while I’m waiting for that to happen.

And wow, those death and injury numbers are just shocking. 198 injuries and deaths at two intersections over a five year period? That is simply a calamity.

Honestly, if speeders slow down after their apps warn them of a photo radar setup, they’re achieving their intended purpose from my perspective. I would just want photo radar installed everywhere…

Yes, I was going to say the same thing. If it achieves the compliance result without punishment, I’m a-okay with that. Basically, if people believe they will be held accountable, they behave better. And those that get fined will be the most egregious violators that should get punished.

I would only agree if there were enough radar speed enforcement cameras installations to cover the whole city. If people know that there is going to be one speed trap on a stretch of road that runs five miles, it doesn’t do much if they just slow down in that one spot.

You’ve got to start installing them somewhere first. You don’t just suddenly and spontaneously cover a city in a network of them.

Absolutely. I think the installation of these cameras is a step in the right direction. But we’ve got a long way to go and the pace at which PBOT is bringing these online does not inspire confidence that we will see real change in our lifetimes

Did someone actually listen? This is great! They will pay for them selves in no time.

It’s interesting that the count data in this piece is based, at least in part, on 2020.

I wonder if there might have been a confounding factor.

Has anyone seen any discussion of fixed vs mobile cameras?

There are some comments from Squareman, drs, and Dan about this. These all sound like fixed camera installations. My understanding is that mobile cameras have a much greater impact b/c it vastly broadens the impact one camera can make.

The only enforcement method that works and doesn’t discriminate. There are either legal speed limits or there aren’t. Past practice has been that these are suggestions and only the unlucky or unfairly targeted get pulled over.

Design is still the most airtight option..

My point was that when the majority of drivers speed, but only a fraction are cited, there is a bias at play as to which subset gets pulled over. Presumably the cameras don’t randomly cite 1 in 100 speeders.

This was a general comment, not directed at the Portland traffic division, but I’d be curious to see whatever supporting data exists.

“No enforcement Portland” is overly tolerant of expired registrations and vehicles without license plates. This needs to end. But of course it won’t because in Portland enforcement is discriminatory against those who can’t follow our laws.

I wish my city was doing this.

Vote Up0Vote Down  Reply
« Metro Councilor Bob Stacey’s retirement marks end of an era, and a connection to the past
Weekend Event Guide: Cyclocross, Showers Pass Sale, a swap meet, and more »