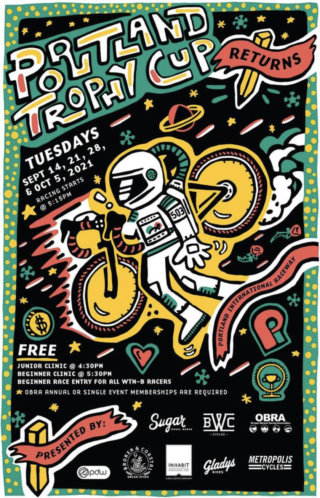 Now even more of a collector’s item.
Official series poster by Mary Lytle.

“I would much rather err on the side of safety. My priority is to keep folks and their families safe.”
— Clint Culpepper, Portland Trophy Cup

The posters are printed, the sponsors are lined up, the racers are ready and their race numbers are ready to be pinned on. But for the second year in a row, cross is not coming.

Clint Culpepper, the owner of the popular Portland Trophy Cup cyclocross race series, announced today that the 2021 season will not happen. It’s the second year in a row that Covid has denied Portlanders of some of their favorite ‘cross events.

The unfortunate decision was made, Culpepper said, due to raging Covid infections and the lack of ICU beds in Oregon hospitals. “I know this isn’t the news that you wanted to hear,” Culpepper wrote in an email, “but I don’t feel that it’s possible to hold the race in a safe manner and also make sure that participants feel safe.”

Culpepper said about 30 people had already pre-registered for the 2021 series. He’ll offer refunds but has made an urgent appeal for folks to opt instead for a 2022 series pass.

The decision impacts four Trophy Cup races and the Rose City Cup which was scheduled for September 25th. The Trophy Cup was slated to begin September 14th and run each Tuesday night through October 5th. 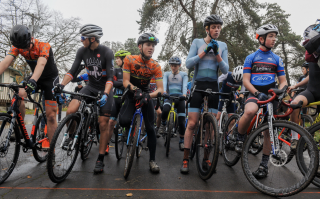 Culpepper’s decision comes less than a week after the Oregon Bicycle Racing Association announced they would not impose vaccine mandates at races. In an email on August 24th, OBRA Executive Director Chuck Kenlan wrote that the organization is “pro-vaccine” but that they would leave decisions about how address the Covid vaccine question up to each individual promoter.

Some Oregon race promoters have said they’ll require vaccines in order to participate. Culpepper hinted on Instagram last week that he might have a mandate in place. What some fans might not appreciate is that most bike race promoters operate on a shoestring budget and skeleton crew of staff and volunteers. While a vaccine mandate might seem like a no-brainer policy, it would come with considerable logistical overhead.

Mudslinger Events owner Mike Ripley, who hosted the OBRA Mountain Bike X-C Championships and the season’s first cyclocross race of the season over the weekend, said he didn’t have a vaccine requirement but that, “We are heading that direction.”

Cycle Oregon is still planning its big multi-day Tygh Valley Rally on two weekends starting on September 10th. Executive Director Steve Schulz said all registrants, staff and vendors at the ride were told earlier this month that they will be required to show proof of vaccination or a negative Covid test within 72 hours of arriving at the event.

Carol Cohen, an event coordinator for the City of Sandy and organizer of the Corn Cross cyclocross race scheduled for September 18th, told BikePortland Friday that, “We have not made a decision yet.”

The cancellation of the Trophy Cup is a major blow to the local racing scene. Another popular race series that also takes place at Portland International Raceway, the Short Track MTB series, was cancelled back in June.

So far, OBRA events have not resulted in a significant amount of Covid infections. All OBRA events must get through a rigorous health evaluation before being given a permit. In April we reported that there were zero Covid cases after the first four large events of the 2021 season.

But that was before the Delta variant took hold.

Last week Oregon Governor Kate Brown announced a new outdoor mask mandate and said, “The Delta variant is spreading fast and wide, throwing our state into a level of crisis we have not yet seen in the pandemic.”

For event promoters like Clint Culpepper, the numbers are simply pointing in the wrong direction. “I would much rather err on the side of safety,” he said. “As kids return to school this week, I believe that my priority is to keep folks and their families safe.”

Even with broad support for an OBRA-wide vaccine mandate, it’s unclear whether promoters will want to shoulder the burden of spreading the virus or whether they’ll try to hop over the barriers and keep their events rolling. This announcement from Trophy Cup could be just the first domino to fall and it remains to be seen whether other promoters will follow suit in the coming days and weeks.

Probably a good idea. However, I’d like to see a strict covid protocol enforced to allow events like this to go on. The big die-off is largely affecting anti-vaxxers and anti-maskers. But, then again, enforcement of protocols would be an added hassle.

Fall of 2019 I got myself an older CX bike to use as a winter commuter, but also had aspirations to start trying some races once I upgraded a few parts on the bike to get it into more of a race-ready condition. Improved the drivetrain and brakes a bit and found some cheap-but-decent CX tires by late January 2020 and was thinking I’d start out with a PIR short-track race in the summer to see how it went… keeping hope alive that I’ll get the chance in 2022! 🙂

The logistics of checking for vaccine cards is too much for OBRA? Don’t you have to check in before a race? Check the cards then. Still too hard? You need to wear a number to race. Pin a copy of your card to the number. When riders are checked or numbers before start, no card, no race.
Contrast this with the response of the Italian Cycling Federation. They will not accept an entry from a rider who does not have a Green Pass.

Let us all know when you put your race on. Ill be there to sign up and show my vaxx card. Happy to hear there are people like yourself willing to put in the time, effort, money, and risk to put on an event like this.

Thanks to Clint for making a responsible choice even if it’s big bummer for everyone. Even if there was no COVID transmission in the whole season, it’s inevitable that someone would get hurt and end up needing medical services, and we need to all be doing whatever we can right now to minimize our chance of adding strain to the medical system and the poor exhausted medical workers.

Vote Up5Vote Down  Reply
« Explore gaps in the 40-Mile Loop with this cool new map
The Monday Roundup: Congestion pricing, cabinet-to-courier, cost of cars, and more »