We’re lucky here in Portland to be surrounded by rivers and lakes. We also happen to have some pretty great bikeways. Put them together and you’ve got lots of fun possibilities.

After years of thinking about it, I finally did a pedal-to-paddle! Last weekend I loaded up our inflatable kayak into the trailer and Juli (Mrs. BikePortland) and I pedaled about nine miles south to Sellwood Riverfront Park. I’ve heard from so many folks that have recently started paddling (either kayak or stand-up paddleboard, aka “SUP”) that I figured it might be helpful to share a bit about our experience.

For me the limiting factor was two pieces of equipment: the kayak itself (which we just picked up from Costco) and a trailer to carry it in. Believe it or not I’ve lived without a cargo trailer for many years since our kids (now 10, 15, and 18!) grew out of our last one. I picked up a Burley Flatbed for $250 from Clever Cycles (a rare local bike shop that stocks trailers!) and have been very happy with it. I like how simple and open it is. It also folds down easily and the wheels pop off in seconds when I need to store it.

The Burley had plenty of room for a two-person kayak, paddles, and air pump. Strap up a few bungee cords and we were set to roll.

Because this is Portland, about half of our route was carfree. We headed south on Interstate and then hopped on the Eastbank Esplanade by the Steel Bridge. That path eventually turned into the Springwater Corridor (after the annoying short gap on SE Caruthers) and then we were river-bound.


One of my concerns with the pedal-to-paddle concept was the security of my bike while it’s parked. I opted for a very high-visibility rack right near the restrooms of the park. Being such a busy, hot, weekend day I wasn’t concerned about theft at all. Just to be safe, I folded the trailer up over the saddle of my bike so my chain lock reached through it. (Note: An even better spot to park would be the fence right near the docks and beach — you can see them from the river!)

Even with a leisurely pace, we went from our backyard in north Portland (near Peninsula Park) to having paddles in the water in just about an hour.

Sellwood Park is just one popular boat/board launch spot. I asked Ryan Hashagen, an experienced paddler (and local tricycle king) who’s explored more Pacific Northwest waterways than just about anyone, for his list of the best local pedal-to-paddle destinations:

Wide marshy lakes full of wildlife from Herons to Turtles. Great views and plenty of shoreline to explore. Can get windy, but it is not hard to stay close to shore at Smith and Bybee. Bikable on the 40 Mile loop.

Beautiful views of the Volcanoes. Often a very calm lake, but be careful of afternoon winds. Bonus trip is to go down from Vancouver Lake into Lake River at Felida. Bikable from the I-5 bridge and also has the Frenchman Bar bike trail adjacent to the boat launch.

The boat launch is right off the Trolley Trail. Paddle to Elk Rock Island and back for a good explore. Be careful of motorboats on the West side of Elk Rock as they sometimes come through quickly with a wake. 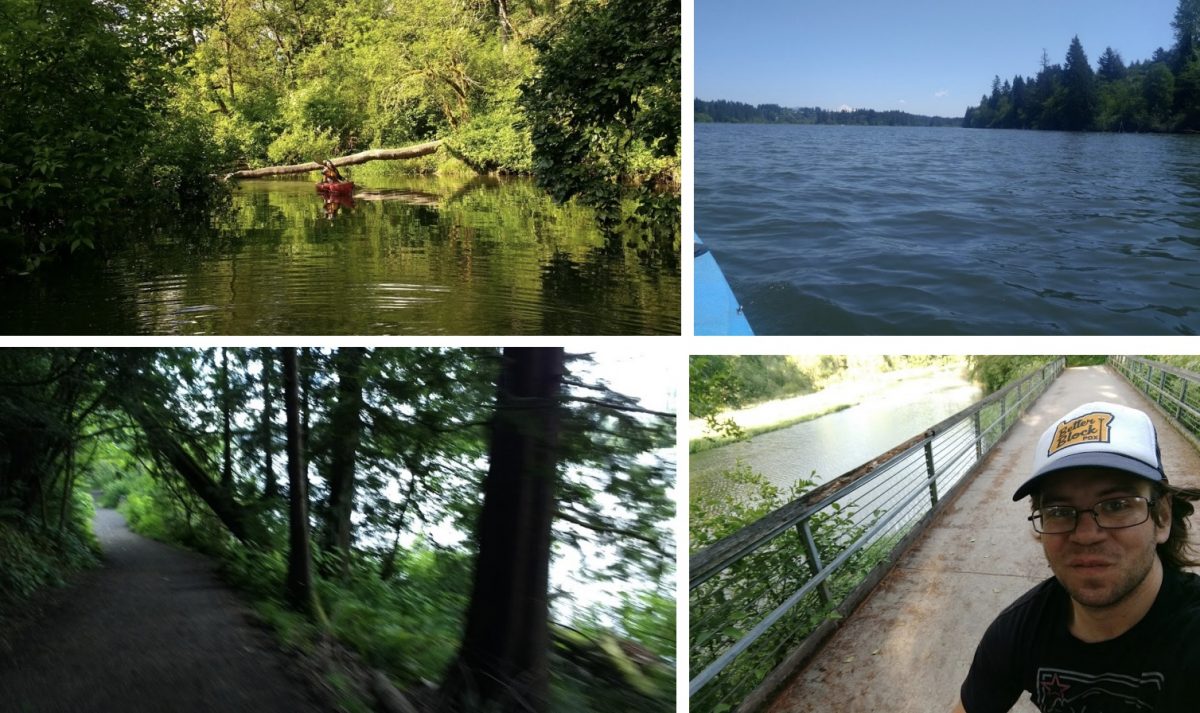 Lacamas Lake is awesome! Explore from Lacamas Park into Round Lake. The Lacamas Lake Trail runs the length of the Lake An extra credit trip is to put in at the North End of Lacamas Creek at Goodwin Road. Paddle all the way to Lacamas Park and pedal the trail back.

Let us know if you have any suggestions or questions. Have fun out there.

I used to haul a rigid 18 foot sea kayak by bicycle. It was a bit of an unruly haul, but it worked pretty well. I used a WIKE Canoe Trailer. But I also ran into the problem of having to lock my bike (and trailer) up while I was on the water. I think canoes are a better vessel for biking to water. If you have an 18′ plus length canoe, you can store two bikes and the trailer on the boat while you are paddling. Just make sure not to capsize or you’ll have a bad time.

Seems like this might be a good place to plug the somewhat crazy niche sport of ‘bike rafting’ https://bikepacking.com/plan/bikerafting-guide/ There are options for going without the trailer and taking your bike with you! I’m currently working on a setup…

Cool. Pack rafts and fat bikes seem like a natural combo for truly remote adventures. I would think that carrying a bike on such a small craft would be a huge challenge (not to mention the challenge of navigating white water in an ultra light inflatable, to begin with), but the author makes it sound like it isn’t that bad.

Perhaps you could use a copy of the Dude’s book:
https://www.powells.com/book/best-flatwater-paddles-in-oregon-more-than-50-great-places-to-take-your-standup-paddleboard-kayak-or-canoe-9780998214825

I used to do solo day trips on the McKenzie, N. Umpqua, Deschutes, Sandy, etc. in a whitewater IK with a Dahon folding bike strapped aboard. But, those were the days (30-odd years ago) when you could leave the boat at a takeout (stream side campground preferred) for a few hours without much concern about it being stolen.

Hmmm, the closest River access for folks in N. Portland is Swan Island…yes that busy industrial district features a mile of Riverside Trail with several easy access points for light craft. There is also the boat launch at the head of the Lagoon for power boats.
Bike access via the wide Going Street sidewalk (Going to the River!) or the Waud Bluff Trail and then Basin Avenue…not too busy on weekends.
Is the River scenic here? That depends on your taste, but for over 25 years I walked along the Trail there, saw lots of wildlife, some interesting River traffic, heard no freeway racket, and had great views of downtown, etc.

The Dude
Reply to  Lenny Anderson

Swan Island is indeed one of only a precious-few access points in Portland. The beach there is quite nice, but the sand and the nearshore are all full of human-made hazards, such as broken glass, human poop, syringes, and old industrial infrastructure. So it’s not a great place to launch.

But for NoPo, it depends where you are. Cathedral Park is also close for many people, and has a good launch, picnic areas, and bathrooms.

Don’t forget that in Oregon, paddlers under 13 need to wear a life jacket, and that you need to at least carry one for each person in the kayak/canoe/SUP. Also, Oregon has something called Waterway Access Permits that are required for non-motorized boats. Revenue goes toward invasive species control, building more non-motorized accesses and facilities, and education.

Chris I
Reply to  Laura

Note that the permit only required for craft that are 10ft or longer:

“Paddlecraft (SUPs, rafts, drift boats, kayaks, canoes, etc.) 10 feet long and longer will need to purchase and be able to digitally display (or have a print copy), one permit per boat, when in use.”

The Dude
Reply to  Laura

Below is the link to information on the “permit” required for non-motorized paddle craft 10’+. I note that the base single-year fee has gone from $10 to $17.

I also note that the FAQ (linked on page below) does not say that the fees collected will go to development of “non-motorized” water access. It says simply that the money is used for “public to access waterways and construction and maintenance of boating access facilities.” (See, “What am I getting for my money?”)

In other words, paddle craft users are subsidizing infrastructure for motor boat users. My view is that this is a ridiculously regressive tax. Another such tax from the Oregon Democrats, who are the opposite of progressive. And just like the bicycle tax.

But it’s also like the traffic laws, where enforcement is random and you have to be dumb or unlucky to actually get the rule enforced against you. The fine, by the way is $115. And the fine is for nothing other than not paying the $17 fee.

And it’s not properly called a “permit” since no one from the government is checking anything to do with your craft (eg, seaworthiness, competency of operator, absence of invasive species, presence of safety equipment, etc). It’s just a fee. For paddling.

drs
Reply to  The Dude

I was stopped by a sheriff boat patrol once in Clackamas County while traveling in a non-motorized watercraft that was over 10 ft in length. They were just checking to see if there were life jackets for each of the occupants. When they pulled alongside, I offered to dig in my bag to find my boat permit. They told me to not even bother pulling it out. I’ll be disinclined to purchase a permit in the future if this is how enforcement works.

The Dude
Reply to  drs

That is typical in my experience as well.

The only place I’ve seen the fee enforced in the Portland area is Scappoose Bay. The officers just stop everyone unloading paddle craft in the parking lot, and if people don’t have the “permit”, they ask them to go inside the Scappoose Bay Paddle Center store and buy one.

Where I come from, this is called a shake-down.

Laura
Reply to  The Dude

Dude, you are entitled to your opinion. The $10 fee was for invasive species education/prevention. The $17 is the combined Permit and AIS fee. Starting in the 90’s, demands were made for nonmotorized facilities, which would have been paid for by the motorized community. The legislature, in 2011, heard the motorized boating community complaints, and wanted to have all kayaks, canoes, SUP, rowing shells etc titled and registered, like motorized boats (or cars). And they had a lot of momentum to make it happen. The Waterway Access Permit was the compromise solution of about 7 years of advisory committees and public outreach, so that NM facilites, either stand alone or as part of bigger projects, and better education of NM boaters could happen.

Read the legislation…the $ can only be used for nonmotorized-related stuff. AND the fee helped legitimize having a person on the board who is a NM boater.

The Dude
Reply to  Laura

Thanks for the considered response. And it is good to know that the funds are used for non-motorized access facilities.

But I find it ironic and unnecessary to develop non-motor craft access. One of the beautiful things about paddle craft is that they don’t require developed facilities for access. The best access points are the tight trails and tiny beaches where the motorheads can’t go. And we can always use a boat ramp when necessary. If anything, we should be limiting motorized access to help control over-use and protect our wilderness.

The idea that I need to register with the government to grab my board and go for a paddle is positively Orwellian. Too much bureaucracy, too much development, too many fees.

Willamette Park (the Portland one) is right the Willamette Greenway Trail. The boat launch is probably the most popular SUP launch spot in Portland. There’s typical mediocre bike parking and restrooms.

One option available there is to rent SUPs at Gorge Performance next to the park, or kayaks at the kayak shop on Macadam. I assume you could park bikes safely at either place while you paddle. They also both include life jackets, vessel permits, etc.

I love me a Vaya.