‘All hands on deck’ moment to influence U.S. Senate on transportation bill 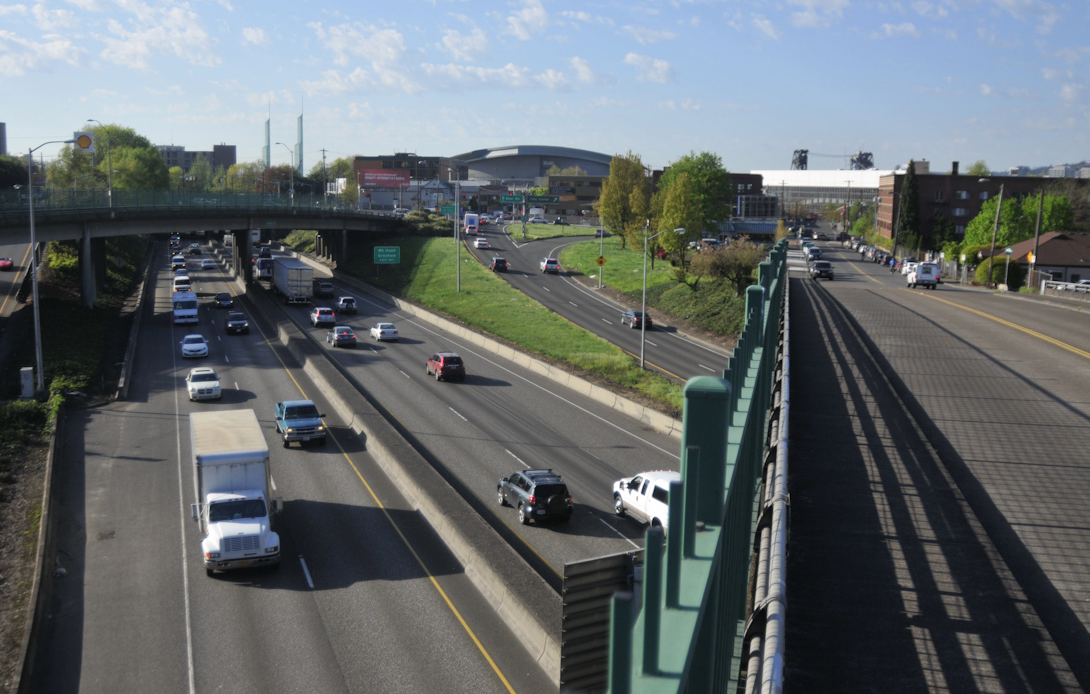 View of the Rose Quarter from above I-5. The freeway destroyed much of the Albina neighborhood and continues to divide the community today. (Photo: Jonathan Maus/BikePortland)

President Biden’s infrastructure goals are in the hands of the Senate this week, with many programs which were dear to progressives having been whittled down to nothing in the name of bipartisanship. National transportation reform groups are sounding the alarm and warning that if the Senate version doesn’t change dramatically, America will miss a major opportunity for progress in fighting climate change and making progress on a host of other issues.

One chunk of money Portlanders have been eyeing, the $24 billion originally allocated for the “Reconnecting Communities” program which would help heal areas divided by freeway projects, has been reduced to a mere billion dollars.

This week, Senators have introduced several amendments to the bipartisan bill which partially restore key programs. In particular, Senator Raphael Warnock (D-GA) has introduced an amendment to increase the Reconnecting Communities funding to $5 billion. This is the pot of money that would fund caps over I-5 as part of ODOT’s Rose Quarter project. As we reported yesterday, Oregon Governor Kate Brown has brokered a compromise to build large caps over I-5 that are estimated to cost $300 million.

Democrats also hope to restore some of their missing priorities in a second round of funding known as budget reconciliation, which can pass with a simple majority vote.

The National Association of City Transportation Officials (NACTO), a coalition of city departments of transportation, points out that the Senate bill “unfortunately continues many of the policies that harm our cities, and even adds $70 billion to more highway projects.” They have compiled a list of amendments which would correct some of the bill’s shortcomings. These include:

Kaine 2143: Requires a “fix it first” approach to highway funding

Warnock 2167+Cardin 2176: Increases funding to the reconnecting communities program to $5 billion
Booker 2371: Increases the federal share for projects in areas of persistent poverty

The timeline is fraught: Hill watchers think the Senate will likely vote to end debate this Saturday, with a final vote on the bill occurring before the Senate leaves for August recess next week. NACTO has called this an all-hands-on-deck moment and urges people to call the Capitol Switchboard at (202) 224-3121 and ask to speak to their Senator’s office. For Oregonians, the direct line to Senator Jeff Merkeley’s DC office is (202) 224-3753; for Senator Ron Wyden, (202) 224-5244.

Once you’re connected, make sure you state your support for investments in infrastructure with the critical amendments above.

UPDATE: Local nonprofit No More Freeways is one of more than 70 groups nationwide calling on congress to fully fund the “Reconnecting Communities” program. Read their letter at Freeway-Fighters.org.

Poor dems. Always caving to republicans in the name of “bipartisanship.” When do they catch on that bipartisanship ended with Reagan? I’d rather see this whole transportation bill go down rather than give a inch.

After watching both parties for the past 30+ years, I’d say 80+% of Democratic congresspeople and senators are at least as car-centric as their Republican colleagues are, as has been every president except maybe Carter and all state legislatures. When it comes to cars, there is very strong bipartisanship – everyone knows that public transit and bicycling are just recreational pursuits – serious voters drive cars.

The Senate (which is unfairly skewed towards rural interests due to arbitrary state boundaries) is 50/50, so any bill will have to be bipartisan to pass. This is the root cause of this crappy bill we’re seeing. If our elected leaders actually reflected the demographics of the country, this bill would look very different.

Alexandria Ocasio-Cortez has said that there are enough progressives in the House willing to torpedo this bipartisan infrastructure bill if the Senate doesn’t also pass the more expansive version via reconciliation. We will see if that’s true or not.

Vote Up4Vote Down  Reply
« PBOT study lays out a new strategy for east Portland arterials
Voices from Dairy Creek Park: Listening to the houseless in Hillsboro »