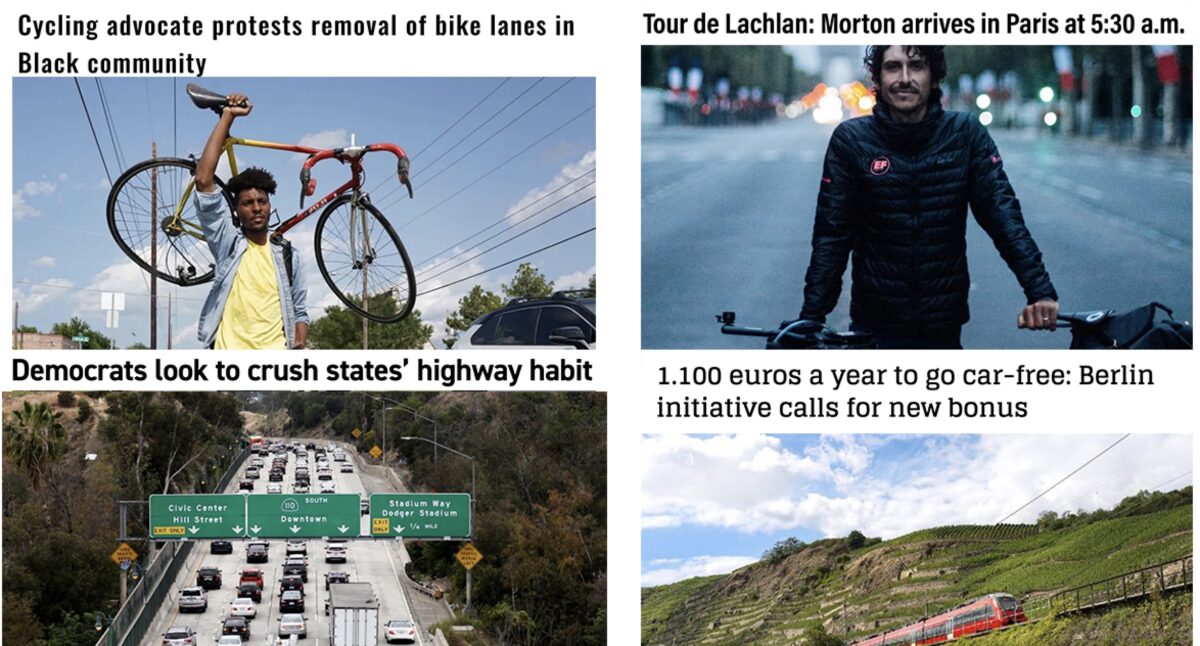 Stand up for bike lanes: With striking similarities to the North Williams Avenue debate, residents of a neighborhood in Tulsa, Oklahoma fought to get bike lanes removed. But cycling advocate Kolby Webster, who is Black, believes bike lanes are good for the community and wants to save them.

Remove freeways, give land back: Those words would have seemed radical just a few short years ago, but freeway removal and community restoration are ideas being talked all over the country, including this feature article in the Texas Observer.

Get paid to be carfree: Berlin policymakers are smart enough to know that cars kill cities, so their plan is to pay people €1,100 per year to not own one — and the funds will be paid out from a carbon tax.

Tours de France: Slovenian rider Tadej Pogacar won the Tour for the second year in a row, while Australian Lachlan Morton completed an equally impressive “alt Tour” all by himself.

Electric car obsession: We are in trouble when Oregon Governor Kate Brown and ODOT’s boldest transportation policy is pushing a faster switch to electric cars because — as this Oxford professor argues — we don’t have time to mess about with car fleet changes and it takes our focus away from shifting trips to active modes like cycling.

Data-centric perils: When a D.C. road safety advocate analyzed police scanners they found pedestrian and bike crashes were three times more likely than car-only crashes to be left out of the city’s official count.

They’re squirming: State DOT and road construction lobbyists are getting scared about new transportation funding policy that’s working its way through Congress. That means we should fight like hell to make sure it passes.

Jersey collectors: If you scoff at people who collect Nike sneakers, maybe you can more easily relate to these collectors who fantasize over cycling jerseys.

Thanks to everyone who submitted stories!

Sneakers or jerseys, I can’t say that I relate to buying stuff I don’t intend to use.

It is nice to see turnouts on busy two lane roads, but just imagine a couple feet of paved shoulder leaving enough room to bike or make surface repairs without flaggers. No offense to grandma or her grandchildren, but there are plenty of places to ride with them other than up to Skyline.

They’re Squirming: The reality is that all states long ago figured out how to get around federal rules on spending federal money no matter what gets passed, and that in most years state and local money is vastly greater than federal funding. With the feds engaged in reckless deficit spending, it will be years of high interest rates to pay off the Chinese and others who buy our treasury bonds, on our debt.

Fun fact: less than 30% of US debt is foreign owned. In fact, the US government owns nearly as much of the US debt. Yes, almost 30% is intragovernment debt like borrowing from the SS trust fund for example.

China and Japan each own about 5% of the US debt.

Here is a link to what the Mount Diablo “Bike Turn Outs” look like:
https://mountdiablocyclists.org/petition-bike-turnouts/

I have no interest in jerseys, I gave some Coors Light, 7-11 and Crest Huffy kit that I had acquired from a friend to the goodwill after I used it up. But bidons – I must have had a big old box with fifty or more from the 1990’s that I dragged from house to house before I finally did something with them to make them disappear- Tdf, Giro, Paris Roubaix, Coca Cola, Zed, Crest, Coors Light, 7-11, Bianchi, Basso ..I can’t remember what all. I only know that now collectors want authentic bottles for their 80’s and 90’s steel bike builds and are willing to pay a lot for them. Oh well….

Re: electric car obsession – “The emission savings from replacing all those internal combustion engines with zero-carbon alternatives will not feed in fast enough to make the necessary difference in the time we can spare: the next five years.”

While true, there is no “time to spare”. We have literally procrastinated way past this. I’m not sure where this notion of having time to act is coming from. Climate change is upon us NOW!

Having been harping on climate action for over 3 decades now, it brings me much grief to say, “I told you so.” And the people responsible have escaped justice by dying of old age. And they won’t ever have to see their progeny suffer from their decisions.

Paying people not to own cars sounds like a great way to subsidize cars for well off people. Who honestly thinks those with means won’t figure out how to have cars they don’t own on paper?

Using funds to strengthen alternatives and guiding behavior with usage fees and infrastructure planning strikes me a much more productive route.

Paying someone to not own a car strikes me as an unnecessary (that is, redundant) incentive.

AAA calculated the average cost of car ownership was $9,561 a year in 2020. Even if your own costs are below average and the car is already paid for, you still have gas, insurance, repair bills, and parking.

I inherited a car once, but I got rid of it because I wasn’t using it much (filled the tank maybe twice a year) and didn’t want to keep paying the “mostly just sitting there” monthly costs.

Anyone who is interested in giving up their car already has a financial incentive to do it.