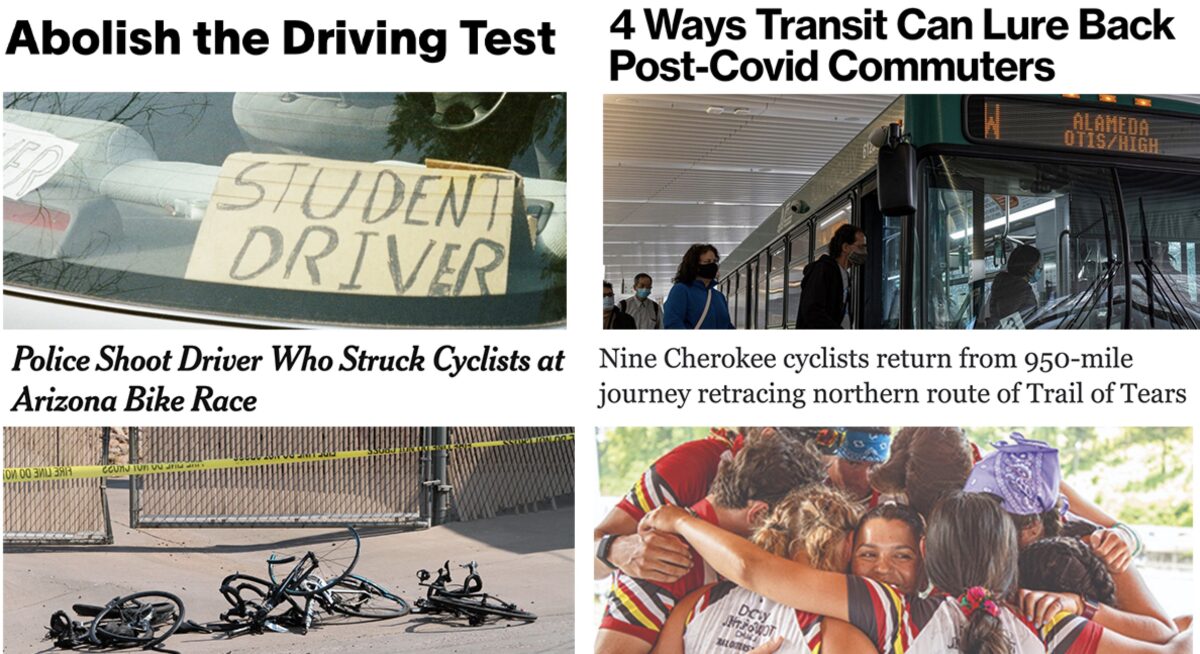 Here are the most notable items BikePortland readers and editors came across in the past seven days:

‘Remember the Removal’: Six riders from the Cherokee Nation and three members of the Eastern Band of Cherokee Indians completed a 950 bike tour that followed the infamous Trail of Tears to remember their ancestors who were forcefully removed from their homelands more than 180 years ago.

Vehicular violence, part 1: A mother of two who was attending a vigil against police violence was killed when a man drove his SUV into the event in Minneapolis last Sunday.

Vehicular violence, part 2: A man driving a huge Ford pickup truck, intentionally rammed it into people who were participating in a charity bike race in Arizona. Six people were seriously injured before the police chased down and shot the driver.

Driving test a “farce”: This Vice article makes a compelling (and depressing) case about what a completely inneffective and absurd joke America’s driver education system is and why we’d be better of ditching it for a new approach.

Transit trip tips: With the surge in car users post-pandemic, every city needs to re-assess its transition promotion strategy. Here are some tips to get people back on the bus.

History of car culture starts with bikes: Some fun history about how the “Father of Good Roads” was a cycling advocate whose fervor for pedaling led to, let’s just say, some unintended consequences.

The VICE article about the weaknesses of the existing US testing system is good at identifying the issues but doesn’t explore any alternative testing schemes that could benefit road safety instead blowing off any international systems that work as being attributed to cultural differences. Knowing that only 73% of Drivers in Oregon, per survey and driving simulation tests, knows a green ball indication means “Turn right with caution after yielding to pedestrians in the crosswalk” is irreconcilable with the idea of no driver testing nor education.

Matt
Reply to  Another Engineer

I can identify another shortcoming of the VICE article, which, while minor, is perhaps still indicative of the author’s lack of thoroughness: The opening paragraph is an anecdote about a driver who passed their test in San Francisco despite nearly running over a family in the DMV parking lot at the end. And I actually had a remarkably similar experience. As a teenager, I also took the driving test at a California DMV, and when I parked at the end, my examiner told me I was driving way too fast in the parking lot, and he would have instantly failed me if he could–but legally the test ended the moment my tires hit the driveway of the parking lot. I suspect the same rule is why that guy also passed the test. So in this case, it’s not necessarily that tests don’t work, just that we have to be smart about how the rules are set up.

(For the record, I never drive faster than a brisk walking pace in parking lots now, sometimes to the aggravation of other drivers.)

Users of motor vehicles have recently gained clarity that their motors have huge destructive potential and that there is commonly no legal consequence for using it. In some places that has been made shamefully explicit. People know that there is little (or no) tolerance for dangerous actions under the influence of intoxicants but a banal failure to take care passes for normal human behavior.

We allow gun ownership but at least we are able see that use of a gun is an aggravating circumstance in committing a crime. If we did not accept mayhem as a consequence of transportation we would not give a free pass to people who misuse motor vehicles in ‘innocent’ ways. I also believe we would see less political violence using the weaponized vehicles that are available to our entire adult population.

Here’s a tip for Trimet to get people riding again: get rid of their goddamn mask requirement, duh!