The City of Portland is rolling out 40 new Biketown stations with a new design and a new material: rubber mats made partly from the scraps of Nike shoes.

This is what happens when the title sponsor of your bike share station also happens to be the largest shoe company in the world.

Biketown operator Lyft sees the new station material — which is known as Nike Grind — as a way to deliver their service with a smaller environmental footprint.

Here’s more from a press statement: 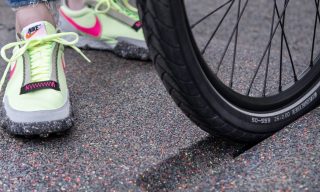 “The rubber mats of the Lyft stations will be made with 25% Nike Grind rubber from Nike’s footwear manufacturing scraps in the top layer and 100% recycled tires in the bottom layer. The stations embrace the concept of circular economy by repurposing shoe scrap manufacturing waste and recycled tires.”

A spokesperson for Lyft said Portland will be the pilot city and will get 40 recycled rubber stations to start. E-bike share systems in Denver and Chicago will get the stations later this year.

I spotted one of the new stations a few days ago on the north side of NE Ainsworth Street just east of Martin Luther King Jr. Blvd (in front of Walgreens).

As you can see the new design has a smaller footprint than the previous locking station design. This will free up a bit more space and make the sidewalk a bit friendlier in general. This is important because PBOT seems to increasingly use Biketown stations to enhance safety and visibility at busy intersections. The new stations are also easier and quicker to install than previous versions, which should help PBOT add service to more areas beyond the central city core.

Lyft says the stations, “Perform an important placemaking function in cities by giving riders a reliable place to park e-bikes as part of Lyft’s efforts to build cities around people.”

I’m a little confused, is the new design different or better because of the materials used? Or is it just a new design (smaller footprint, more user friendly) and also happens to use the new recycled shoe material?

“Better” is in eye of the beholder. I’ve updated the post with a photo of the old/new design. My feeling is that the new design is better because it has a smaller footprint and softer edges, which is generally nicer in terms of placemaking and footprint issues. One downside I could see is that the new docks aren’t as robust so they might be harder to lock to, but I haven’t tried the new ones yet.

Why is a rubber mat necessary to park bikes on?

It’s marketing, so not “necessary” but very interesting. [The world has to find some use for all the tires – car and bike – we end up with after their initial lifespan is done.]

Though from an operations standpoint it will be interesting if this “marketing solution” becomes an “operations nightmare” after a few years of use…I have used recycled rubber for speed bumps etc…its very heavy (likely heavier than the original steel) and may break up or decompose overtime and get into streams…like other tire debris.

The mats hold down the mounting infrastructure

Aren’t the existing station bases made of metal? Metal of course is highly durable, and is recyclable at end-of-life.

Whereas rubber mats aren’t durable, aren’t particularly recyclable, and release the dreaded “micro-plastics” into the environment as they degrade and break down over time. How is this a smaller environmental footprint?

Or is this just more marketing green-washing?

The rubber is recycled, which would give it a significantly smaller environmental footprint when compared to the mostly virgin steel of the old design (probably from coal-powered mills in China).

Hey Nike! How about paying some taxes instead of giving us some glorified floor mats? And while you’re at it, why don’t you talk about how much of your total scrap goes into the Regrind process?