“Historically, I’ve hated hills. But what are you going to do? Ride around every single hill?”
— Maria Schur

When it comes to bicycling, Portlander Maria Schur has morphed from hill hater to hill lover. And now, her personal journey has led her to spread that love to others.

Maria is Portland’s hill-climbing ambassador. A sloped street sommelier whose infectious love of riding bikes and building community has found a home in her latest creation: the hill killerz (name is not capitalized, because “little hills = little letters,” Maria says).

A former leader of the Vancouver Bicycle Club, Maria (whose nom de velo is “Bicycle Kitty“) has always had a flair for finding creative ways to ride together. When we first met her in 2012 she had rallied a group of friends to join her on an early morning bike commute through Forest Park. She’s been a leader and organizer of the Tweed Ride, Cranksgiving, Caddyshack, and many other fun rides and events.

But hill killerz is different. Here’s how it works:

There are only three rules: “No complaining. Do whatever you want. Don’t sue me.”

Since this is about having fun, there’s no need to report back on your progress and there are no Strava recordings required. And these are not macho hills. They are chosen so people can have fun, challenge themselves, and get a bit stronger. And unlike big climbs that require riding out of your neighborhood, Maria prides herself on finding urban rises you have never considered doing repeats of.

Like this 100-foot climb between North Interstate and Flint.

I talked to Maria yesterday and asked how this all came about.

“Historically, I have hated hills,” she said. “But what are you going to do? Ride around every single hill? So I worked on changing my inner monologue from ‘I hate hills’ to ‘OK, this is a hill, just experience it, embrace it until I get to the top and then it will be over.

A couple years ago Maria started doing repeats of the hill she lives on (SE 52nd between Harney and Flavel). And she stuck with it and found she actually liked it. Being a self-described, “social butterfly,” Maria wanted to get other people involved. She did a hill kill-themed Pedalpalooza ride last summer and dreamed up the Hill Killerz Challenge as a way to keep it going during the pandemic.

She’s shocked and giddy that 55 people signed up for the first round (and 20 people are on a waiting list). “My heart is on fire with this, there are 55 people all over the Portland metro area doing hill repeats because I told them to! And I’m 55 this year. What a great number huh?!”

Participants live as far afield as Vancouver, Canby, Beaverton and Forest Grove. That means Maria had to get on her bike and hunt for hills in those areas. And she loves that part of it. “It turns out hill-hunting is this whole other kind of bike riding I didn’t know about before.”

Keep in mind she doesn’t just see a hill and assign it willy-nilly. She’s a climbing connoisseur who keeps myriad factors in mind: The pavement needs to be smooth, there can’t be a lot of stop signs, a safe turnaround spot is essential, and then there’s the personal touch. “If someone is just starting out or maybe has a hurt knee, I’ll find them a chill hill,” she shared.

Challenge participants are a wide spectrum, from super fit people training for an “Everesting” attempt to less experienced riders. There’s even a three-year-old.

“The three-year-old lives in the Foster-Powell area which is so flat,” Maria said, “I couldn’t find a hill in their neighborhood and was about to give up when I looked at the map on my phone one last time and found a church parking lot with a ramp to a back door.”

If Maria can find a fun hill for a three-year-old and an Everester, she can find one for you.

To get in on the fun, check out hill killerz on Facebook or Instagram. Deadline for Round 2 sign-ups is May 15th. 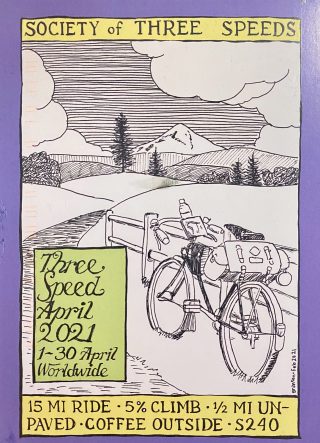 Hills not your vibe? There’s another fun challenge you might like. Portland-based Society of Three Speeds is hosting Three Speed April and there’s still time to register. You can win neat stickers and patches by artist and SOTS founder Shawn Granton for completing various ride challenges.

Awwww, wow. I don’t know who this is but I clicked on your blog and see you seem fixated with Council Crest, so I just wanted to mention there’s another hill over that way that may be even better than CC. It’s called Nansen Park and here’s a hill kill near it: https://ridewithgps.com/routes/35320358

Aaha yes, that would be AWESOME!

I’m just getting back into recreational riding after 10 years of health problems limited me to local shopping trips by bike. After being really depressed when I found myself unable to deal with the hills I used to go up without much problem, I found a half mile 4% climb not too far from my house and started doing hill repeats. By the time I got strong enough for it to become boring, I was able to do my old routes again. Good on Maria for spreading the idea.

I’ve been seeing a lot of #hillkillerz posts on my social media! Awesome work Maria!!

I don’t think anyone in Portland works harder to make cycling fun than Maria.

I was lucky enough to get a hill this year. I’ve already done my first stint and look forward to completing – or surpassing – the goal she set.

Maria is a gem, for sure.

awwwwwwwww thanks you two!!!

Any Critical Mass, PedalPalooza, Any Alley Cat or Named Gravel ride, even Crit you ever did ride started as a cult of personality- some nice Carny lifted the rope high enough so you could could get in on the fun. If you are not in with hill killrz,you may think Strava.com is a cycling “community”. Wake up and pump up your tires Portland. Ecclesiastes 3:3

I love the carny reference and yes, it’s a time to kill, hillz that is!!

I’m determined to get stronger this year and said YES! when I heard about Maria’s HKC. I posted “my hill” ride to the bike club and now a bunch of us are riding “my hill”. Some are even doing post-grad climbs (more than 5). Last time out we had a young boy join us impromptu, leaving his walk with mom to scream downhill and pedal back up. He made it and she caught it on video. This HK Love is spreading up here in Vancouver! Thanks, Maria!

I’ll break the website if I reply with as many hearts as I’d like. Thanks for spreading the love, J!

I’ve hardly ridden my commuter bike for the past year, never mind my road bike. I signed up for killing some hills with Maria back in January, knowing it’d be good for me even though I’d probably not want to do it come April. Well, April arrived, and I did my first set of repeats… and it wasn’t terrible?! I am super impressed with what a great job Maria did in choosing a hill near my house, with a reasonable grade, and with a turn-around spot. Cheers, Maria! Thanks for letting us all in on the fun — and thanks for the no complaining rule, which meant I kept my grumbles to myself and just a few other people.

Why do we have to “kill” anything? Violence and machismo is boring.

It looks like “buzzkill” will be in the lexicon for the foreseeable future.

I used it as an expression, because it rhymes with hill and added a Z to the end to make it playful.

Ironically, one manifestation of machismo is to criticize and shut down a stranger. Just saying.

Were you wanting to join our fun challenge or just let me know you think it’s boring?

This is so cool! What a fun way to change your thinking about somethings that can seem daunting.

Is there a way to complete this challenge without using social media? I loathe hills more than anyone I know and would like to “kill” this hatred!

Yes, the challenge does not require any social media use at all.

Just email me to sign up – bicyclekitty at gmail.

Thanks for your interest,