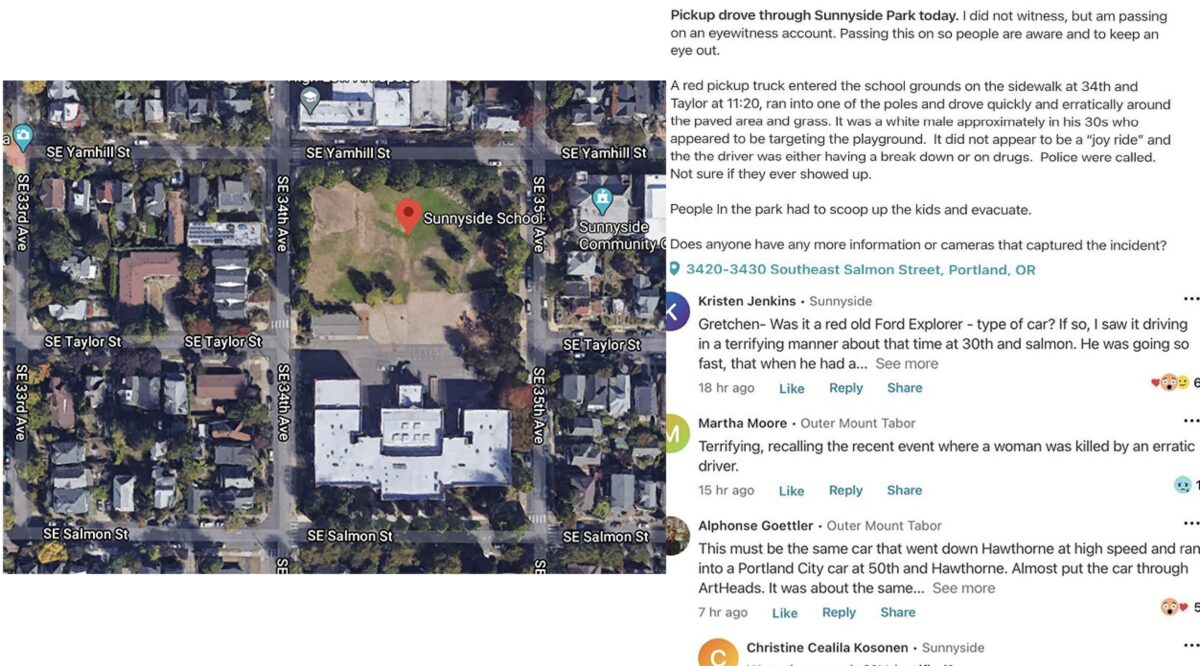 A pickup truck driver drove recklessly through a school playground on Friday and left several terrified people in his wake.

“He appeared to be targeting the playground… people in the park had to scoop up the kids and evacuate.”
— posting on Nextdoor

According to posts on Nextdoor that I’ve confirmed with the Portland Police Bureau, the incident began at Sunnyside School on SE 34th and Taylor on Friday at 11:20 am.

“A red pickup truck entered the school grounds on the sidewalk at 34th and Taylor, ran into one of the polls and drove quickly and erratically around the paved area and grass. It was a white male, approximately in his 30s, who appeared to be targeting the playground. It did not appear to a “joy ride” and the driver was either having a breakdown or on drugs… people in the park had to scoop up the kids and evacuate”

One person said it was likely the same driver “driving in a terrifying manner” at SE 30th and Salmon at around the same time. Another commenter on Nextdoor said they were walking their dog at SE 31st and Taylor and, “Saw the truck blast through the intersection… It was going so fast it terrified me.” And someone else chimed in to say “This must be the same car that went down Hawthorne at high speed and ran into a City of Portland car at 50th And Hawthorne.”

At least one person who read about the incident shared how it made them recall the violent intentional road rage incident in the nearby Buckman neighborhood back in January where one woman was killed.

Portland Police Bureau Lieutenant Greg Pashley confirmed they received a call at the same time and location. “The call description was a vehicle doing ‘donuts’ in the grass.” Lt. Pashley said the driver was last seen headed southbound on SE 34th Ave. So far no license plate number or other substantial evidence has come to light and the PPB haven’t opened an investigation. The driver has not be caught. If you have more information, please call the PPB non-emergency line at 823-3333 and reference incident number 21-73602.

In addition to this rampage, there were two serious injury collisions involving a car driver last week.

On Wednesday (3/17) some suffered serious injuries and was transported to the hospital by ambulance after being struck while walking by a driver at SW 3rd and Pine in downtown Portland.

And on Friday (3/19) afternoon, police responded to a serious injury crash at Cathedral Park. According to a PPB statement, someone was walking on N Crawford Street under the St. Johns Bridge when they were struck by the driver of a car. The driver fled the scene and is still on the loose.

The January rampage started at Pine and 33rd. That’s less than 1/2 a mile from Sunnyside School.

Wow. I am speechless but not surprised given the traffic chaos seeds of 2020 now being reaped in our communities.

These seem to be above and beyond any norm. I suspect mental health symptoms from a long 2020 could be at play.

Will this latest episode of traffic violence go by without public condemnation from Commissioner Hardesty, PBOT or any other elected city leader? Are our children also collateral damage for reckless, polluting car culture?

Planners should be able to find a way to make our infrastructure equitable without giving in to car supremacy.

Most places of worship are very car-dependent, more like commercial operations than residential places. For a church to be successful and continue to attract worshipers, it has to be very accessible. The same could be said of private and religious schools and of universities. There’s also the vast gray area between churches as community institutions versus the separation of church and state.

My point is exactly that these place ought NOT to be car-dependent. Shouldn’t community members be able to roll, walk, bike, transit to their mosque, temple, church, etc; ditto for schools and parks. I don’t quite understand why any of these places should rely on an automobile for access.

Churches last longer than gentrified neighborhoods. Most people going to them still have moved to the numbers, Vancouver, or somewhere even further. Why do they still go? It is probably the last bit of any community they have left. Hence why they drive.

If the Hawthorne incident and the Sunnyside incident are one in the same, which they most likely are, the vehicle was a Red Ford Expedition with tan pin stripes, probably mid 2000’s model year. I was driving east on Hawthorn at about 41st in fairly heavy traffic at almost 20 MPH when it went by me blaring its horn in the center left turn lane. I would estimate the driver was going between 45-50 MPH. This was moments prior to it hitting the city vehicle parked at 50th/Hawthorne. If it had a tag I didn’t see it and I never saw the driver. I left my name with the city employee, as did several other witnesses.

The only thing that slowed it down was the traffic calming island the city installed where the young teen was struck and killed by a driver operating his vehicle in the same manner.

Zach Katz
Reply to  Matt B

> The only thing that slowed it down was the traffic calming island the city installed where the young teen was struck and killed by a driver operating his vehicle in the same manner.

While this is obviously a good thing, it’s important to note that the traffic calming island is only necessary in the first place because of the center turn lane.

drs
Reply to  Matt B

That’s terrifying. Not holding my breath, but I sure hope the driver is found and the vehicle is impounded and destroyed.

Someone in that neighborhood must have a doorbell cam that caught this.

I’d hope so. But if the reports are true that the vehicle had no registration, the camera footage may be of little assistance.

Someone in charge should realize choking major thoroughfares with divertoers and such is just making matters worse for neighborhoods.

Please expound on how that applies to this specific incident. I’m curious of what thoughts you have behind the most superficial (I don’t mean that as an insult) you stated.

Which major thoroughfares have been choked with diverters?

Neighborhoods benefit from diverters. Neighborhood streets are where people live and where their kids play. I’ve seen a huge decrease in traffic and noise on neighborhood streets when a block party temporarily diverted traffic. Cut-through traffic is a problem even on streets with nearby arterials.

Cut-through traffic is a problem, particularly on streets with nearby arterials.

While I do not wish to minimize this disturbing incident, can we talk about a broader institutionally-led effort that would expose many more children to risk multiple times daily? During the pandemic, Portland Public Schools has been embarking on a majorly disruptive “enrollment rebalancing” process in southeast that ignores the existence of high-crash corridors. They and their consultants are trying to push through a plan that would eliminate some neighborhood schools; the new boundaries would force even more elementary school children to cross highways like Powell Blvd and 82nd Ave. In other words, those populations that could most benefit from 20-minute neighborhoods (because walking and biking are their only options) are having those options removed.

Under some of PPS’s proposals (currently on hold for the next phase, I believe), my neighborhood’s school – which finally, thanks to newly completed LID, has sidewalks next to it – would cease to exist as a neighborhood school. Instead of being able to use the future 70’s greenway to get to school (along SE 80th, which already operates as a de facto greenway in terms of its bike/ped count), elementary-age children would have to cross 82nd to go to Harrison Park. PPS claims these new lines are being drawn for equity reasons – however, in reality this will mean that those families who have a car will drive their children to school, and those families without vehicles will be at greater risk trying to cross 82nd, in an area where there are gaps of > 1000 ft between safe(r) crossings or signalized intersections

I’m pretty troubled that the idea of a 20-minute neighborhood (and the existence of Barrier Streets) does not seem to matter to PPS in considering school boundaries. If relatively isolated incidents like what happened at Sunnyside Environmental School (in a close-in and wealthier neighborhood in comparison) are covered on this page, Jonathan, I’d love to see some coverage of broader institutional issues such as PPS’s SE Enrollment Balancing efforts, which really fly in the face of efforts to promote biking and walking among youth.

Interesting. Do you know if anyone has done any work to try to quantify and compare and contrast the average trip that students in the existing and proposed school districts would face?

I believe that some parents did that on their own (because I don’t think it was part of the analysis done by the consultants hired by PPS) and have shared it in Facebook groups focused on the process. (If I find it, I’ll share.)

I think it’s worth pointing out that while distance is one important metric, the presence of barrier streets/high-crash corridors through a catchment area should also be considered when PPS draws their boundaries.

Chris I
Reply to  Zoe

Unfortunately, the district is being forced to respond to parents who are cheating the system and driving kids long distances to “better” schools. The high-demand schools have a finite capacity, so the district has to re-draw boundaries to limit enrollment. I would like to see really strict enforcement of residency before we resort to re-drawing boundaries. Neighborhood schools should be the goal, so more kids can walk and bike to school.

Zoe
Reply to  Chris I

The motivation is a little different than that. To the best of my knowledge, there are at least three or four goals in play, many connected with managing space/real estate: to develop a feeder pattern for Kellogg middle school, to change schools from K-8 to K-5, deal with overcrowding at some schools, and to concentrate DLI programs (language immersion programs) at certain schools, rather than have them be separate threads at neighborhood schools. All of these are goals that make sense, in principle – however, we shouldn’t throw away the principle of walkable/bikeable neighborhood schools in meeting these goals. And from what I’ve heard during the process, it PPS seems to be massively backpedaling on the concept of neighborhood schools – which is a real shame. In any case, here’s the link to PPS’s materials – https://www.ppsenrollmentbalancing.com/