(Photos from the scene by Jonathan Maus/BikePortland)

A quiet Monday afternoon in southeast Portland was shattered when a driver rampaged through the streets in what appears to be an intentional act of vehicular violence. The Portland Police Bureau says one person who was struck by the driver near SE 19th and Stark has died from their injuries and five others were seriously injured.

Many details remain unclear but at least one of the victims was on a bicycle (see photo at right). The PPB refer to the deceased person as “one of the pedestrians” so we assume they were on foot. The Oregonian reports the victim as a 70-year old woman.

Map of reported collisions and near misses. (Google/BikePortland) 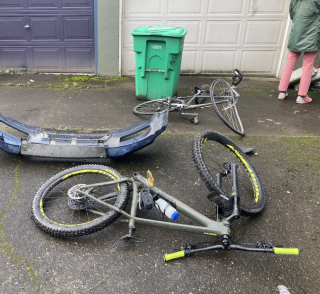 Someone who lives near SE 19th and Washington shared this photo of bicycles damaged by the suspect driver.

According to a PPB spokesperson who addressed media at the corner of SE 18th and Stark around 3:30 pm, the first 911 calls of a hit-and-run came in around 1:00 pm near Laurelhurst Park — 1.5 miles away from where the nightmare finally ended. In several locations the suspect appeared to drive up onto the sidewalk.

It all ended just on the other side of the fence from Buckman Elementary School where a smashed-up, grey Honda Element came to rest with its bumper lying on the sidewalk. The crime scene includes a wide swath of the Laurelhurst and Buckman neighborhoods in an area bordered by SE 37th in the west, 18th in the east, Stark to the north and Belmont to the south.

Rich Chatman with the Portland Fire Bureau said “It was chaos” as the incident unfolded.

The suspect fled the scene but was surrounded by onlookers and held until police arrived to arrest them. The standoff and arrest was caught on video.

Posts from people who claimed to have seen the incident quickly showed up on Twitter. Sarah Mirk, who lives near SE 19th and Washington, shared these thoughts with BikePortland: 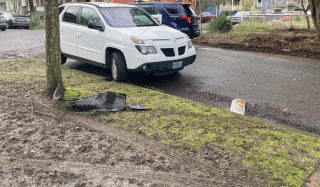 Tire marks and car parts mark where the driver went onto the sidewalk on the northeast corner of SE 19th and Washington.
(Photo: Sarah Mirk)

“At about 1:10pm, I heard someone screaming and crying outside, so I ran downstairs. My neighbor was on the front porch, really upset. The first thing I noticed was that there was a pair of headphones laying on the sidewalk on the corner. The grass along SE 19th was torn up with tire marks, it looked like a car had swerved all along the block. On the corner of 19th and Stark were two bikes, lying on the sidewalk, one missing a seat and one with a bent wheel. Next to the bikes was a fender of a car. A person was lying in the road, not moving. It was a terrifying scene. Several neighbors were already around the person in the road, calling an ambulance and offering aid. The police and paramedics arrived moments later and transported the person laying in the street. The situation is a nightmare.”

A commenter below shared that they were almost hit at SE 26th and Stark:

“This vehicle swerved to hit me on SE 26th at SE Stark. Thankfully, I was too far onto the south side of SE 26th to make a target. I was on my bike crossing SE Stark southbound and heard the accelerator as he passed stopped cars westbound Stark at the light at SE 28th. Driver continued westbound down the eastbound lane where I was (as I was crossing Stark). I had to pedal faster to avoid him. I’m glad I never ride with headphones or I may not have heard the accelerator and I’d be injured now or worse.”

This incident has some of us recalling the intentional vehicular violence in downtown Portland in May 2018. In that case, a man intentionally drove his car onto a sidewalk on the Portland State University campus and seriously injured three people.

We hope the best for everyone impacted by this horrific incident.

This is a developing story and we’ll share updates as more information comes in.

Check more coverage from The Oregonian.

I wanted to let folks know that a vigil is planned tonight at 5pm for the victims of the vehicle attack yesterday. It will be at the field adjacent to Buckman Elementary (SE 19th and Stark). As a Buckman Elementary parent/Kerns resident I hope to see you there.

Cars are the new guns, unfortunately.

This is just awful. I live right there; I was running through Laurelhurst just a couple hours ago.

Our transportation infrastructure is inherently violent. I want to feel safe walking and biking in Portland, but I don’t. And this is one of the better US cities for it.

Wonder if city leadership if will use this as an excuse to increase police funding.

My youngest just finished 5th at Buckman last year, and I live around the corner. They walk to school regularly now to meet up with friends outdoors during Covid. Every time I tell myself, they are fine, they are safe, what are the odds…? It is so tragic that this happened. I hope whoever is responsible is prosecuted. On design: SE Stark has speed bumps and a 20 MPH limit and is a school zone. I know many here think traffic cameras can solve our speeding/enforcement woes, but I hesitate to see how they would make a difference here. Oh, I hear the chopper overhead now.

So, do you want a cop or a social worker to respond to this? It’s gets worse everyday. It’s not the car, it’s the human.

Covid isolation is causing a major leap in mental illness. Suicide and murder are way, way up. Solution? Open up everything. Make masks and distancing optional. Let Natural Selection deal with the result. There will be a die off, but there’s one on the way anyway, especially with climate change coming on strong. Humans have overpopulated the planet, trashed its life support systems, and exhausted its resources.

OMG WTF is wrong with people!? Care and condolences to everyone affected, including the witnesses and traumatized neighbors!

If you know any victims get them a lawyer asap. I suggest Bob or Mark or Ray

All three have done pro bono work helping me, and they both ride bikes and help people without a concern for their own income. They hold workshops and Mark volunteers for the ACLU on civil rights and BLM suits.

My guess is this deadly driver had been reported previously to 911 or non emergency and the cops issued no citation. That’s my experience. I have handlebar cameras that have captured so much driver harassment of me and others. I do not share those publicly for fear the drivers will harass me further.

And buy a handlebar camera. I’m thinking of getting one for a headband while I go on long walks. Here is one video that tells a thousand words: I was on foot.

From what I can see from this incident and the general driving behavior around town these days about 50% of drivers need to have their licenses revoked. We are reaching some type of peak insanity in the asylum of happy motoring. The original Mad Max movie took place in the year future year 2021. I am sad that it turned out too be so accurate.

This vehicle swerved to hit me on SE 26th at SE Stark. Thankfully, I was too far onto the south side of SE 26th to make a target. I was on my bike crossing SE Stark southbound and heard the accelerator as he passed stopped cars westbound Stark at the light at SE 28th. Driver continued westbound down the eastbound lane where I was (as I was crossing Stark). I had to pedal faster to avoid him. I’m glad I never ride with headphones or I may not have heard the accelerator and I’d be injured now or worse.

I hope for a speedy recovery for all the victims.

Wow, this is horrible. And he was just driving a “small” Honda Element. The current flood of monster pickups and SUVs is going to raise the damage on things like this. Time for some reform on licensing and vehicle size.

Unfortunately unless the driver is rich all these folks are probably screwed financially. Oregon’s tiny insurance requirements are often too low for a collision that hurts one person, seems very unlikely that this person will have enough assets/insurance to make the victims whole again. The minimum insurance requirements for drivers need to be raised significantly.

I’m disappointed to see comments about this travesty being a lesson in one sense or another. Holding the police accountable doesn’t mean guys like this aren’t arrested and laws aren’t enforced. I don’t think any form of traffic slowing would’ve helped here. This was intentional murder. This was a psychopath who decided he wanted to kill people. It doesn’t matter if it’s with a gun or a car, this guy is a murderer and will face his day in court. It saddens me that someone lost their life due to this psychopath. I hope those injured heal fully and soon.

Such a tragedy. Condolences to the family of the deceased and those injured.

Jonathan, Buckman is 1 mile, not 1.5 mile from Laurelhurst Park.

This is completely insane. To read the description, that he ran over the 70yo lady, then ran her over again.

A witness in the updated article on Oregon Live said that the car had Washington Plates. Can we just take down the bridge already?

I commented above without mentioning the people who were killed or injured. I’m sorry. It feels ineffectual to wish people well but I hope those who can heal will recover as rapidly as may be. I’m also thinking of the family of the person who can’t recover.

Our mundane transportion has the immediate potential to end lives. That is shocking in itself without someone using that power to commit multiple violent attacks. It’s deeply disturbing that a person can pick up a tool and feel a weapon, can look at another human and see vulnerable flesh.

It’s too common and too easy for people to ‘joke’ about hitting others with motor vehicles. Our backs to them. It’s routine for law enforcement to disregard, excuse, or fail to investigate drivers who crash their cars into unprotected people.

I call on Oregon legislators to put some teeth into the Vulnerable Road User law. The vulnerable should be the care of the state and the burden of proof should be on those who wield the greater danger.

Perhaps outlawing providing medical treatment to car thieves themselves injued in their theft incidents would slowly help reduce these incidents.