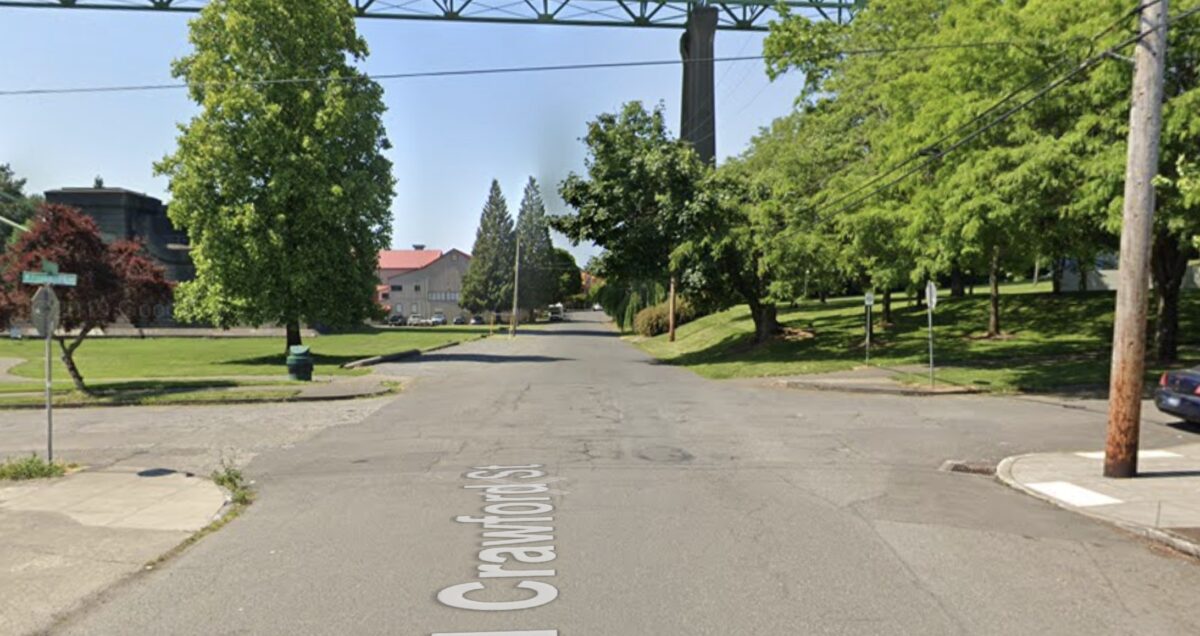 Location of alleged murder in St. Johns where suspect used their car as the weapon.

A man has been charged with murder in a fatal collision that happened Friday in St. Johns.

On March 19th around 3:30 pm the Portland Police say 29-year-old Roy Bennett Jr. intentionally drove his car into a 57-year-old person near the intersection of N Crawford and Pittsburg (near Cathedral Park).

This incident was initially reported as a hit-and-run. Today the Multnomah County District Attorney announced that Bennett has been charged with one count of murder in the second degree, failure to perform the duties of a driver (hit-and-run), and one count of unauthorized use of a motor vehicle. The victim succumbed to their injuries today (3/22). Their name has not yet been officially released. 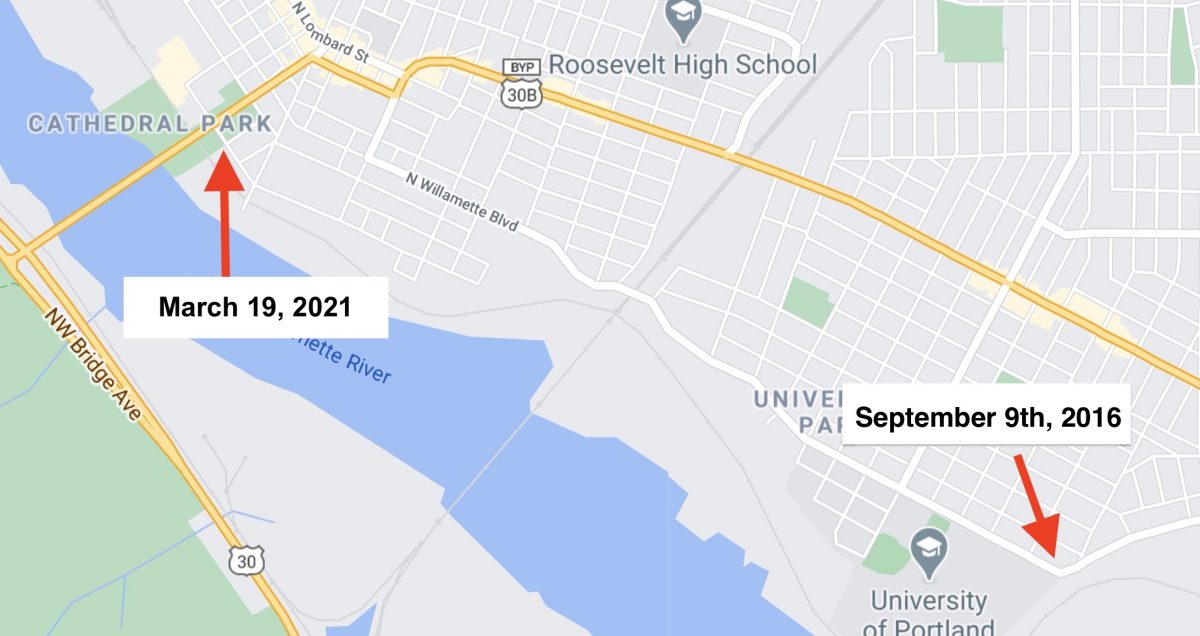 Bennett is accused of “intentionally crashing into the victim,” while operating a stolen car says the DA statement. 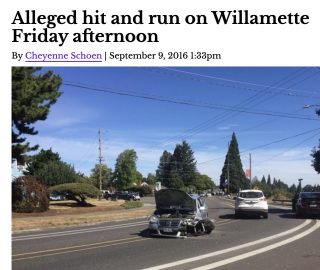 The suspect is the same man involved in a 2016 hit-and-run that happened just two miles away from Friday’s incident. According to a story published September 9th, 2016 by the University of Portland Beacon, Bennett was arrested after he crashed his car into another driver and fled the scene by foot. That collision happened on N Willamette Blvd near N Olin. Bennett was driving a stolen car in that crash too.

UPDATE, 3/23 at 4:45 pm: PPB have released the victim’s name. He has been identified as 57-year-old Errol Rees, of Washington County.

This is just so tragic. So many perpetrators of vehicular violence are recidivists.

I wish we did more to crack down on the abundance of unregistered vehicles that are flooding the streets of Portland.

I was the victim of a person that ran into me with a stolen vehicle a short distance away from Cathedral Park just a few years ago. Luckily, it was only my car that they destroyed. I would not have survived if I had been biking.

Glad to hear they’re going for murder 2, but they still aren’t even invoking the VRU law to up the lesser penalties? What exactly does it take?

squareman,
The Vulnerable Roadway User statute is only triggered when someone is charged with Careless Driving. It will not apply in this case because there is no Careless charge. Not yet at least.

Thanks for that. Since I didn’t know exactly, I looked that one up. I am careless if I: “…drive(s) any vehicle upon a highway or other premises described in this section in a manner that endangers or would be likely to endanger any person or property.”

That’s a low bar. If I’ve actually already hurt a person it’s likely that carelessness was involved. Could we get the prosecutors to knock the dust off and actually charge these offenses?

Is it too soon to talk about this?

“That’s a low bar,” and yet, that I’m aware of, it has been used in fewer cases than can be counted on one hand. I’m sort of baffled as to what it takes to be used.

Careless driving is not a crime, it is a “traffic violation,” meaning that no particular mens rea, or state of mind, is required. Think of speeding: It doesn’t matter whether you did it on purpose or not, if you go over the speed limit it’s a violation.

Murder is a crime, meaning that intent (the mens rea) is required as an element of the crime.

The penalties for crimes, especially felonies like murder, are far greater than a violation. Citing someone as “careless” in their actions can be seen as inconsistent with, or distracting from, a charge that requires intent. Therefore, prosecutors generally don’t want citations issued for the same behavior that constitutes a criminal act. That’s why it is unlikely here, and elsewhere where crimes are charged, that you will see a careless driving citation issued.

Yes, I’m getting that now as of the thread above, and my confusion stemmed from the lack of application of the law since this law has been written. The problem is or seems to be, that for all prior infractions where it should have applied, there’s some sort of statement as to the lack of proof or “state of mind” of the person to prove it was a careless act. Intention or state of mind shouldn’t come into it – careless is careless, whether one is aware of the action being careless or not. If the law was going to be so toothless, there wasn’t a whole lot of point in passing it. And going all the way back to 2012 on this very site, it seems the problem lies with the citing officer as to why it is so rarely invoked.

Yes. The discretion afforded law enforcement officials and prosecutors is and will continue to be widely abused. This is only a minor example in comparison to some of the non-charges against police officers for violence in the course of duty.

Reform is badly needed, and everyone paying attention to the situation knows it. But you won’t get it from Republicans or Oregon Democrats. The people in charge in Salem will tinker around the edges (eg, no chokeholds), but they won’t do anything that would address the root problems. I don’t see any realistic political solution in the foreseeable future, even as the problem grows worse.

I’d like to believe Bennett will spend a good deal of time incarcerated. But, Joel Aaron Schrantz was released from custody after only 3 years, for mowing down and killing Mitchell York on the St John’s bridge in 2016

I sure hope he goes away for longer. It seems like it might be easier to prove intention in this case. But Schrantz not getting life after killing a man and racking up a massive laundry list of violations over decades is just absurd.

I believe he got his license suspended for life too. I remember going to the hearing. I wonder if he has been driving, Seems like He was the type of person That Wouldn’t Care.

..>Errol was my stepdad…we hadn’t been in close contact in years, and only picked up ccontact again in the last few years…He’d turned over a new leaf, gotten a new lease on life, and was living on the up-and-up…. They left out some important details, like the fact Bennet was trying to steal Errol’s car! Errol caught his punk-ass in the act. That’s when he ran over Errol and left him for dead! ***portions of comment deleted by moderator***

I stand corrected, as he wasn’t trying to steal one, he was already in one…I want Justice to prevail…I hadn’t seen the man in years, but I have strong, fond memories of Errol..Long story short, mom went one way, Errol went another, lost contact, then regained contact a few years back..Errol was getting his life together again, about to be married..it sucks..

I feel very sorry for you. I hope the man that killed your father will be put away for a very long time. He needs to be put in a place where he can’t do this to anyone else ever again.

Vote Up1Vote Down  Reply
« A man driving a pickup rampaged through southeast Portland on Friday
How to do better DUII enforcement: An interview with Columbia County Dep DA Kimberlyn Silverman »