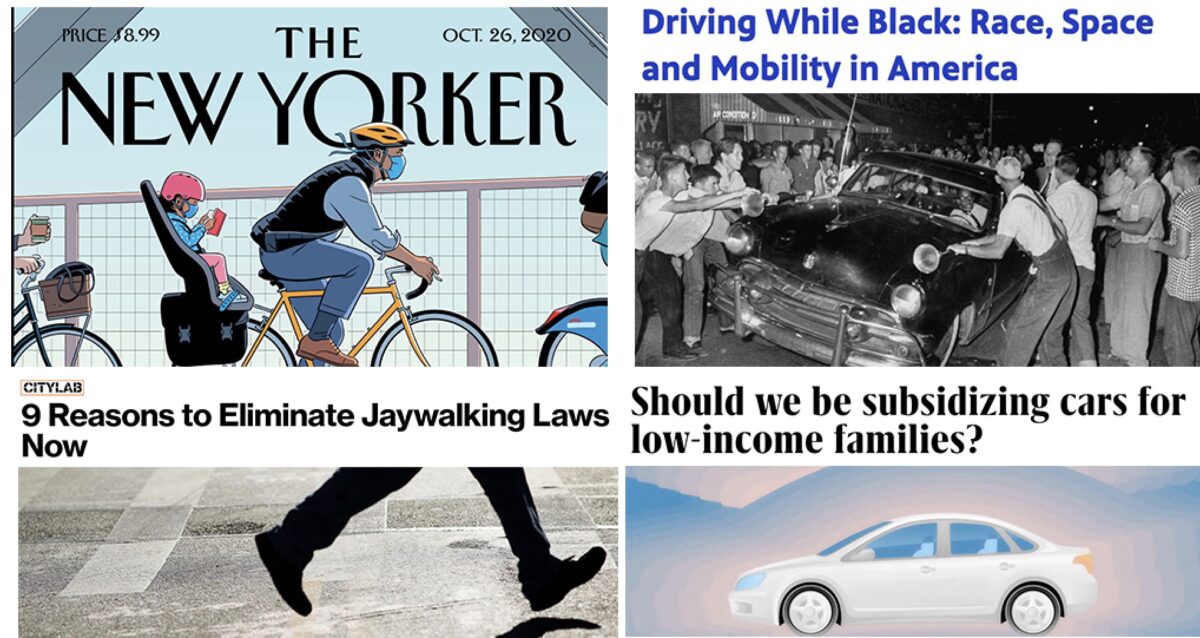 Welcome to the week. Here are the most noteworthy items we came across in the past seven days.

Give them good cars: This article from Fast Company might give enlistees of the War on Cars pause. It speaks to an issue I think about a lot: How do we make good decisions in the transition between where we are and where we want to be.

Whose streets?: The pandemic and an entrenched bias against bicycles by police in a major city in India have forced a major debate about how to best utilize road space.

Bikes in the forest: Not to be outdone by the Department of Interior (who just released new electric bike policies) the U.S. Forest Service is seeking public input on how to regulate battery-powered bikes on their land.

Great news: An anti-tax activist’s effort to cut car-tab taxes raised by lawmakers to pay for transportation infrastructure was struck down by the Washington Supreme Court.

The indoor cycling bug: Indoor cycling is all the rage, but please promise me you won’t do it indoors with a bunch of other people like these unfortunate Canadians did.

Less driving is key: T4 America has a new report to add to your toolkit that lays out how land-use and transportation are essential to the climate fight.

Driving while Black: New PBS special examines the role of driving and cars on the life of Black people in America.

“Jaywalking,” ugh: Sort of infuriating that in 2020 advocates like author Angie Schmitt and urban planner Charles T. Brown are still fighting against a concept created by the auto industry to get non-driving people out of the way.

Car culture: This is a fascinating look at the very popular trend of fast and loud cars and their owners and fans who meet up late at night and do crazy stuff. Focus is on New York City but the same thing happens a lot in Portland too.

A welcome image: This week’s New Yorker cover is fantastic and they even shared a fun interview with its creator, R. Kikuo Johnson.

The subsidized car thing is a classic example of how our systems have worked to disenfranchise BIPOC and the poor at all levels, and thusly create self-reinforcing outcomes. In any other scope, I would absolutely oppose such an idea in general (which is not to say I oppose anti-poverty programs), but given how hard it is to commute by bicycle or bus in meaningful timelines (anything more than 30 – 45 minutes), even more so if you’ve got kids in school and your work places are widely dispersed. All of this to say, I think here in the U.S. while automobile ownership is a poverty trap (car ownership is so expensive when it comes down to it) and yet given how long *edit* and/or difficult */edit* it can take to commute *edit* by bus / bicycle */edit*, it only makes sense to have some kind of program like this in place.

The Portland group Hacienda is (was?) teaming up with Forth for to provide EV car sharing for their low-income families: http://www.opb.org/news/article/electric-car-sharing-low-income-housing/

Car sharing obviously has limited utility, but it’s a great addition to the arsenal, especially if everyone’s living in the same apartment complex.

That’s why protected bike lane networks need to be built *all at once* – so they’re immediately actually useful for everyone. Then you can subsidize e-bikes instead of cars

I agree in general, however I think the challenge will always be in re-inculcating people to think of bicycles or other mass-transit options as being valid / viable options. And I think for that to be true, we have to make more than simple changes to our infrastructure, we have to change the very auto-centrist mentality that cars = freedom. Topical, given the PBS documentary on driving while black.

While I’m all for more bike lanes, it’s just ONE element of successful bike infrastructure. For example, what do you do with your ebike when you get to your job at McDonalds?

Or how to do you store your ebike if you’re on the fifth floor of an apartment without an elevator or (safe) bike storage room? My (analog) commuter is ~35 lbs and I still struggled to haul it up more than one flight of stairs or up on a MAX rack. (And yes, I lift weights, I’m just tiny.)

Yes, bike parking is very important, too. Bringing the bikes inside—when feasible—will likely become socially acceptable until secure indoor bike parking facilities are built (which could literally just be repurposed vacant storefronts, something we’ll have no shortage of in the coming months).

But, that would cost about point zero five billion dollars or something. You could cash in about 20 bike networks and widen a freeway!

The article was very disappointing at least to me.
The so familiar claim that we just need to do this one counterproductive (short term) thing while we also work on the bigger (long term) thing is soooooo tedious. We never actually work on the long term thing, which would be to stop subsidizing automobility, to disincentivized car use, copy some or all of the things that bureaucracies and legislatures do in other countries that are less car dependent.
Catherine Lutz has written about how automobility *produces* and *exacerbates* inequality, and throwing cars at the problem really doesn’t acknowledge or account for this.

I could not be more excited for the potential of off-road eBike access, but I am concerned about Class 3 bikes (pedal assist up to 28 mph) being allowed.

New Yorker cover: I must confess to being a bit worried by the person carrying their hot coffee in their left hand, biking in a crowd while crossing the bridge.

I’ve found I can do it pretty successfully with my own personal to-go mug. With the plastic/paper one shops provide, not so much.

It could be Portland if they were also on their phone. i have seen this, but haven’t tried it myself.

This is why my PDW coffee cup holder was one of the best purchases I’ve made for my bike.

Car Culture: Yeah, we get the same thing here in Greensboro NC, plus the loud motorcycles, pretty much from sundown to 3 am every night, especially after the colleges reopened but had all their classes online. Students no longer need to attend classes, so why sleep at night? And yet the bars and nightclubs are closed at 11 pm per state Covid-19 restrictions, so there’s about 3-4 hours of impromptu street parties. And of course we get police and ambulance sirens until 3 am too, adding their noise to the mix.

Pandemic or no pandemic, the public needs outlets to burn off their energy or angst, and if the local authorities ban all the usual outlets, then humans will find alternatives, usually very loud and harmful ones at that. It was interesting how few participants in the NY Times article were wearing masks or social distancing.

When living downtown in 2000-01, loud cars were the #1 offenders robbing me of sleep. Loud pipes all day, cruising from early evening to after midnight, then people cranking their sound systems in a parking lot starting at 4 a.am after the nearby hip-hop club shut down. I averaged less than 4.5 hours of sleep a night. I couldn’t focus well enough to fill out a form or hold a job so I ended up homeless, luckily not for long. Now people are cranking the tunes on bikes, too.

I’d love to see widespread subsidization of e-bikes for low-income people that live in cities. Pedal-assist bikes have the potential to make cycling much more useful, accessible and conventient for loads of people, while still having huge environmental and health benefits. And they’re much cheaper than cars, making it easier to reach a larger number of people.

I agree but ebikes still need to solve the theft problem. They’re like bikes but cost an order of magnitude more thereby making them that much more desirable. Even being key locked like a motorcycle won’t help much I’m afraid as they can be carried off or rolled away on a skate board.

In the article on Jay Walking: “Prior to the emergence of cars in cities, no such concept existed;” but “Jay Driver” was created to describe the tsunami of poorly trained / uncertified motor vehicle operators once private cars became affordable and widely available in the 1910s/1920s…also when the States organized their first Department’s of Highways (DOTs) and gave the new profession of traffic engineers card blanch to set the tone of the discussion started by the car companies.

Remember to tell that to the ‘Jay driver’ who threatens you with their car and tells you to get on the sidewalk.

I loved that whole article.

Especially the bit about the UK pedestrian death rate being half the US. No jay walking laws. I can cross with the lights, against the lights, nowhere near a crossing, diagonally, etc. The only place I can’t walk is on a motorway. So either UK pedestrians are twice as smart as US ones, or jaywalking laws make things worse. Your choice

R. Kikuo Johnson’s artwork is amazing. Here’s another bike related one I found.

Wow, thanks for the link! I seriously love his artwork. Just saw (through the link) that he created a couple of books – I’m going to order The Shark King for my kids. Thanks again!

Electric motorcycles in the forest? Ugh.

Chris I
Reply to  Rivelo

Rivelo
Reply to  Chris I

Love Let Me Google That!
Is an electric car still a car? Yes.
Two-wheeled vehicle with a motor? Motorcycle.

Chris I
Reply to  Rivelo 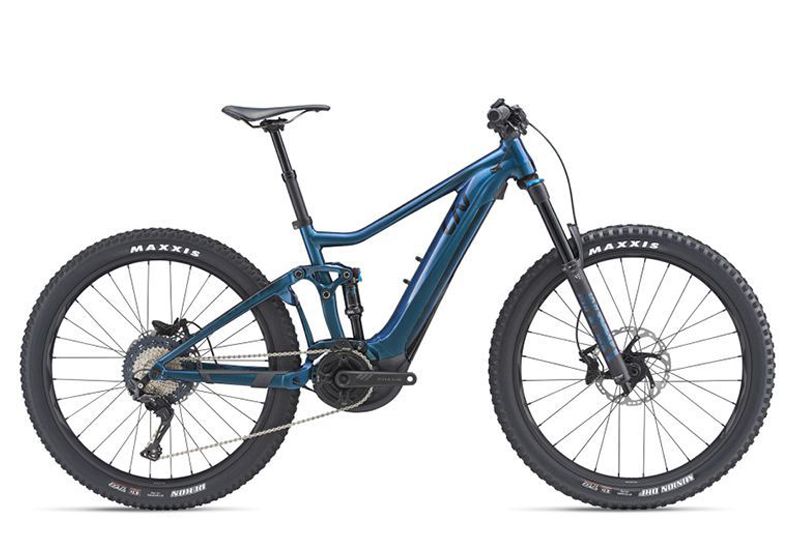 Rivelo
Reply to  Chris I

It’s not the appearance, it’s the speed.

OK, then I am super-excited for the opportunity to ride my human-powered, electric assisted to 20 mph, motorcycle on more trails.

My local police department now has an electric motorcycle, the kind that go very fast. It makes the same noise as a softly purring cat.

All electric vehicles make very little noise as there is no combustion and the conversion of electric to kinetic energy is highly efficient.