The Oregon Department of Transportation is putting finishing touches on the first phase of the Outer Powell Safety Project — a $20 million rebuild of Powell from 122nd to 136th. The project has added four new crossings as well as physically protected bike lanes that vary between curb-protected in the street and sidewalk-level facilities.

With $17 million from the Oregon legislature and another $3 million from Metro, this project is the first of three phases that will cover all of Powell from Interstate 205 east to 174th (Portland city limits).

ODOT is currently in design for the remainder of the corridor which will be consistent with the just completed section. Construction on the other sections is due to begin in 2022.

Last week ODOT released an online open house and shared an update with the East Portland Action Plan’s Land Use and Transportation Committee on September 16th. The sense of pride and excitement about the project was evident from both activists and project staff.

“I’ve been out several times recently and it is so wonderful to see this stuff in person,” ODOT Community Affairs coordinator Hope Estes shared at the EPAP meeting. “We saw a woman pushing a stroller and her son who was with her, walking outside of a stroller several feet behind her. And I remember watching her from across the street and thinking that would not have been a safe activity in this area just a year and a half ago, because there would not have been a sidewalk for this person.” 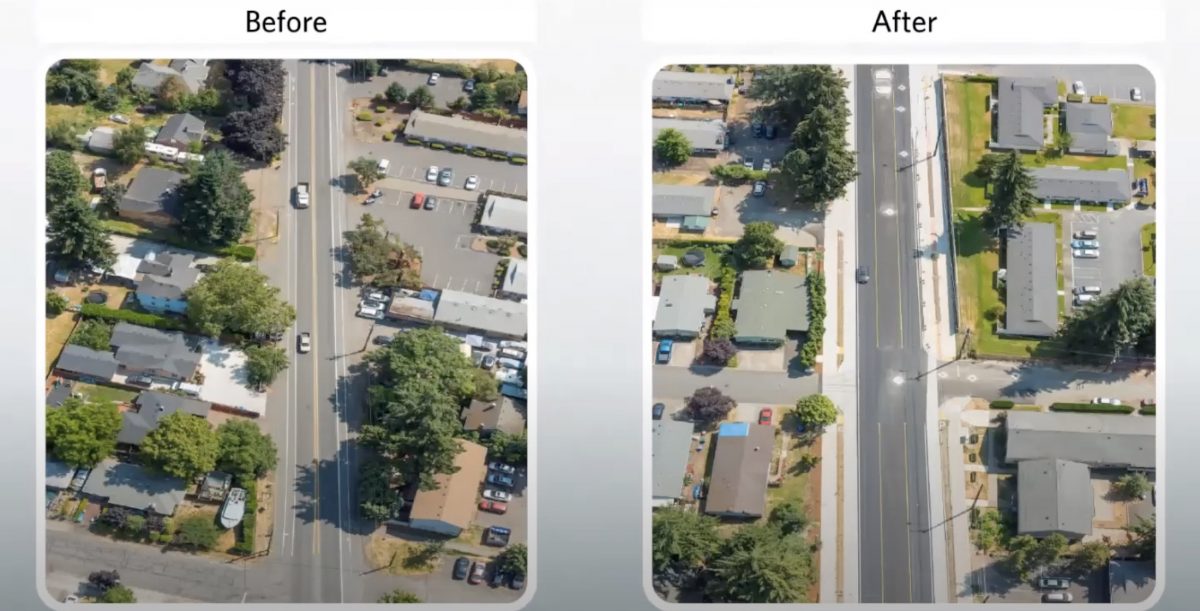 In a video released by ODOT (above), local activist and EPAP committee member Jim Chasse said, “One of the most important things is it gives us access to our business centers, which are kind of spread out… Now we’ll hopefully be able to see the 8-80 age group out here.”

One woman in the video, resident Teresa Soto said, “It’s going to be a beautiful boulevard.” Those are big words for Powell and illustrate the dramatic changes this project has made to the street.

After riding the new segment several times, Chasse told me he’s happy with what ODOT has completed so far. “I really like the concrete bike lanes. They give me a vibe that says this is ‘my space’ and make for a surprisingly smooth ride.”

Also at the recent EPAP meeting a PBOT staffer confirmed that the city has received support from ODOT to reduce the speed limit from 35 to 30 mph.

Once ODOT is done with this project, they’ll hand over ownership and maintenance responsibilities to the City of Portland as part of a jurisdictional transfer that was ordered by the legislature in 2017.

Learn more about the project and share your feedback at ODOT’s online open house which is available through October 18th.

Ok, I hate to always be so negative but $20M in infrastructure and $0 for enforcement is my takeaway. No one is going to abide by 30mph except during congestion. The rebuild of Powell was sorely needed and welcome but I worry about this engineering-driven capital-intensive approach.

Look what happened on Cully Blvd; years ago we built out the street with the finest (over) engineered road money could buy and today it remains unsafe and inhospitable due to flagrant disregard for speed or parking restrictions.

Sidewalks bike lanes and bioswales are pointless without regular sweeping, parking enforcement and routine speed patrols to back them up. Engineering and construction can only do so much, we must respond to the reality of how people experience and use the the facility.

Enforcement doesn’t really work. Speeding is such a weakly punished crime and such a culturally acceptable thing to do. Engineering is the answer. Our problem is that both PBOT and ODOT have no interest in slowing down motorist on the roads despite what they say.

If you want a road to be 20 mph or 30 mph, there are engineering methods to achieve that. When ODOT or PBOT sets a 30 mph, its with a wink and a nod because they know motorist will generally go 40 + on those stretches.

“If you want a road to be 20 mph or 30 mph, there are engineering methods to achieve that. ” do tell. Don’t leave us in suspense. Remember, Powell is an Arterial street and Major Emergency Response route.

Amazingly, I didn’t just think of this concept
https://en.wikipedia.org/wiki/Traffic_calming

If you don’t want traffic to exceed 30 mph you can make the road feel more narrow, build traffic islands, speed bumps with cutouts for EMS, extend the curb at every intersection, etc..

This isn’t new and its not hard. Wide open lanes lead to high traffic speeds.

Median islands in center lanes don’t slow traffic and the ones drivers have to go around only slow them 1-3 mph. Curb extensions don’t slow drivers either, except maybe when turning. Refuge islands and curb extensions are pedestrian crossing enhancements.
Speed cushions don’t get speeds much under 25 mph on streets like Powell, and as a major truck route and Arterial, it’s unlikely they would be acceptable from a noise and road damage perspective.
An example of traffic calming on an Arterial with 17,000+ vehicles per day is what you need to find.
On streets like Powell, separation of incompatible modes is the best practice.

Dope, if you want to take a crack at reading the wikipedia article, it would be a lot more interesting to respond to you.

There are lots of things you can do to calm traffic on an arterial. You have to do a combination of things, not just one thing. Making the road feel more narrow and putting obstacles in the road will keep cars far accelerating and maintaining hide speeds. Curb extensions slow turning speeds and protect pedestrians as well. You can use dynamic speed bumps to slow speeding traffic.

No one is trying to get Powell under 25 mph. You can have fast roads or safe roads. Not both. You can’t just separate “incompatible modes” on Powell because, stay with me, people live there. If the goal is to have a space that is only hospitable to motorist, we need to upgrade Powell to an interstate. Otherwise, we need to recognize that Powell can and should be developed to be a 30 mph AT BEST road which means adding more lights and making the road narrower.

When you have no actual experience doing the things you claim will work, resort to name calling. You set the parameters of 20 to 30 mph. Obstacles in the road? Powell has a center turn lane in the new layout, so no one will have to slow going around anything to continue east-west. Reading that source would be remedial for me. I’ve been actually doing this stuff for over 25 years. As a street classified as an Arterial (Federal Functional) and city major truck route, you will not get a travel lane less than 11 feet wide just for safe movement of trucks near cyclists (mirrors).
There is no such thing as a dynamic speed bump. People have been proposing various concepts for over 25 years but nothing has made it to market. The tech to accomplish it would be cost prohibitive and high maintenance in a time when maintenance funds are limited.
You might want to check out the Dunning-Kruger effect next time you’re searching for the next best idea.
For Powell, only fully separated bikeways with a low barrier (24″ high) to reduce vehicle intrusion and sidewalk outside that will achieve the safety you seek. For driver safety, a full median corridor with roundabout intersections would be safest.

I live very near here and speeding is real out this way. It’s pretty quiet in my neighborhood except for the young dudes in their cars with the exhaust mods *ripping* up and down Holgate/Powell/112th/122nd. I see loads of cops but never anyone getting pulled over. Kinda confounding. There’s also, like everywhere else in town, no parking enforcement of any significant kind unless you initiate it. Like I have time or want to constantly call parking enforcement for bike lane and sidewalk parkers. I’d never get anywhere and it would make me lose my mind.

I’d say enforcement would work, that’s my hunch, unlike what cmh89 is saying below (or is it above?) It’s just there *isn’t any* enforcement. Speed, get a ticket, have to pay a hefty fine (no wiggling out of this shit); that’s gotta count for something. It’s gotta make an impact. Or it doesn’t? I have no idea I guess. Besides that I agree with everthing else cmh89 is saying.

I’m wondering how many trees they cut down for this road widening. Drivers have too much space, completely straight and unimpeded. They’ll be over 30mph easily and someone will get killed there.

During the online discussion this came up. Apparently ODOT is required to plant as many trees as they cut down. The roadbed width hasn’t changed, but the additions of sidewalks, grassy strips, and protected bike lanes has expanded the right-of-way in spots, and some trees were cut down. The addition of a new grassy strip on both sides will allow for more trees than Powell normally has.

David: Are they planning to widen green strips to afford the planting and growth of more large form street trees? Judging from the video it looked like they are maintaining the same narrow green strips. If so that will be a huge lost opportunity. The 2016 Citywide Street tree inventory documented East Portland’s distinct lack of both street trees and the planting strips of sufficient width to grow the medium and large form street trees that provide multiple public health and safety, environmental and economic development benefits. Research has particularly documented the immense public health benefits of extensive street trees and canopy in mitigating the negative impacts of vehicles and roadways. It looks to me like ODOT and maybe the City of Portland missed the boat big time on this aspect of creating a truly complete street for this project.

But / and this is not to anyway diminish the good work of community advocates that I know pressured ODOT to make this project a lot better than it others would have been. Kudos to them.

The sections of “6 lanes” described are rare on outer Powell, including between 122nd and 136th. Even your ODOT before photo shows a 3-lane road: 2 travel lanes and 2 narrow bike lanes. No sidewalks, no curbs, and no marked parking (or even space for it.) Just a rural soft shoulder. No center turning lane either, so when someone in a car wanted to turn left, the traffic behind would use the bike lane as a car passing lane. Pedestrians also used the bike lane as a sidewalk, and there are lots of pedestrians in the immediate area.

I was confused by that as well…the “Before” photo doesn’t show any on-street parking lanes. That’s just “wild west” unprogrammed space, basically wide open gravel shoulders with no curbs. Yes, sometimes people park there, but it’s not officially parking. There just aren’t really any rules with gravel shoulders. This redesign does wonders for clarifying the appropriate use of all the space and improving safety for everyone.