(The fence completely blocks a travel lane on SW Main and partially blocks a lane on SW 3rd. Photos by Jonathan Maus/BikePortland)

The Trump administration’s military occupation of Portland has expanded into the public right-of-way. And so far, the City of Portland is letting it happen.

Today, federal employees installed a massive steel fence anchored by concrete barricades around the U.S. courthouse on Southwest Main. The wall creates a complete blockage of a city-owned sidewalk and travel lane. Bicycle riders are being forced out of the bike lane and into the adjacent lane and people on foot are walking in the roadway (toward oncoming traffic).

The wall is just the latest unwanted incursion by federal troops since they arrived in Portland in late June and it demonstrates their continued disregard for local laws, property, and human life. City streets are public assets and should not be permitted to be used by federal authorities without a clear explanation or justification. 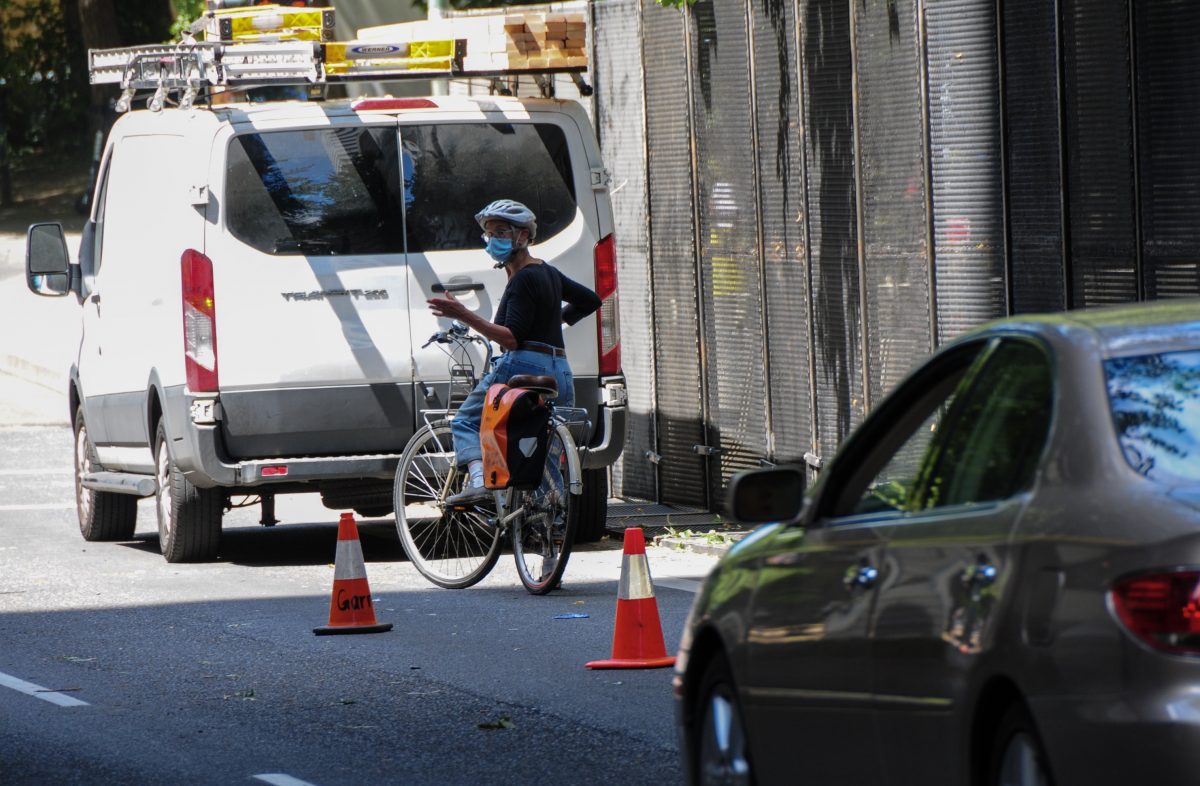 A woman got stuck behind an illegally parked truck on SW Main and waved a driver past.

Portland’s transportation bureau requires permits for anyone who uses a public street or sidewalk. No signage is present on SW Main to warn road users of the upcoming closure and there is no lane or sidewalk closure permit displayed. We’ve asked the Portland Bureau of Transportation (PBOT) if they processed a permit for this closure but they have not yet responded. A map hosted by PBOT that shows temporary right-of-way closure permits does not include this block of Main and 3rd.

It’s unclear who, if anyone, gave the Department of Homeland Security permission to use City of Portland property for their wall.

A variety of fences have been installed over the past several weeks to protect the courthouse from the nightly onslaught of outraged Portlanders who are fed up with these unaccountable and unhinged military troopers who are aiding Donald Trump’s disturbing march toward fascism.

We are 55 days into nightly protests, marches, and brutality from local police and federal troops. Most of the violent assaults on Portlanders have taken place on PBOT-owned right-of-way and police have repeatedly used “clogging traffic” or “impeding traffic” as a pretext to forcibly move — and often assault — non-violent protestors. PBOT manages and owns these spaces but the agency has done nothing to defend them, they have not asserted their authority in any way, and they have not issued any public statements to reaffirm Portlanders’ statutory rights to use streets and constitutional rights to assemble in them.

This incursion into City of Portland-owned public right-of-way should be taken seriously. The federal authorities are intentionally limiting access to streets being used to exercise constitutionally-protected free speech rights. Everyone — whether they’re on foot, on bike, or using a personal mobility devices — should feel confident that they can safely move around downtown. This is especially true when people need safe, ADA-accessible escape routes to avoid being shot at by heavily armed, trigger-happy federal troops.

On July 19th, the Portland Fire Bureau issued a statement making it clear that federally contracted law enforcement agents, “Were not, and will not ever, be allowed to use fire stations for their tactical operations.” The Fire Bureau is led by City Commissioner Jo Ann Hardesty who has become an increasingly stalwart opponent of local and federal police abusing their power.

I’ve asked PBOT Commissioner Chloe Eudaly’s office for a response to this issue. So far they’ve deferred to PBOT.

UPDATE, 7/23: We’ve learned (thanks to a commenter below) that the USA owns the right of way around this building up to the curb line. This means they wouldn’t need a permit for the sidewalk closure. The issue of using Portland-owned street space remains.

You can see the permits PBOT has issued online, and there is none issued at this location. https://pdx.maps.arcgis.com/apps/webappviewer/index.html?id=a367ce94ec894beabb5c692bea63db75

What about the Federal ADA law?

Full lane use is authorized

When did Portland succeed from the union? Technically, if you are still part of the union, then the entire state is under federal jurisdiction, has been since 1846 (i.e. 12 years before statehood.)

So when is the attack start on the Pioneer Courthouse, that other famous Portland federal structure?

Those horizontal projections on the ground at the base of the fence are just deadly. When I saw the video, I thought they were shadows, which people riding or driving by may assume also, if they see them at all. What I imagine is someone biking in the lane (because they have to) with a driver coming up behind or alongside them assuming the biker will move over towards the fence. Then the bike’s wheel gets caught and flips the rider into traffic to get run over.

I recall discussions about storm grates and erosion control bags that are dangerous. This blows those concerns away in comparison. Just talking about safety, not adding in the federal takeover aspect.

Mr. wheeler, tear down that wall!

I believe the federal land extends into the street so you’d have to look at the original property lines and the easement back to the city for the street. They may not require permitting.

If you vandalize, loot, commit arson or other crime on federal property you can expect attention from federal law enforcement, whether in PDX or in a National Park. Since the city/county/state are sitting on their asses allowing blatant criminal activity on federal property the feds are obligated to stop it. The people of the USA paid for that federal property and the feds will not allow Portland criminals to destroy it without a fight. They are doing the right thing.

People pay HUGE taxes to the county and state for law enforcement, and for that money they expect the police TO DO THEIR JOBS, and stop criminals when the crimes are happening in plain sight! If the police are incapable of doing their job WE WILL FIND OTHERS WHO ARE CAPABLE, and that won’t be hard to do.

Think of the many businesses in Portland who can’t do business because the local and state “authorities” are a bunch of useless losers.

Their wall keeps them in too.

I wonder how they get food.
I wonder how long they can keep their electronic devices charged and running if power was cut like they do in hostage situations. They are holding JUSTICE hostage.

If they really want a medieval castle siege then I hope they already have their own Jim Jones Kool-aid stocked because the building isn’t tall enough for jumping out of windows to work.

I expect that worse is yet to come. As this fence looks like it is portable and moveable I expect that in coming days they will expand it to create a larger ,”green zone,” like the one where the U.S. embassy is in Baghdad. They will want room for barracks, a drone base and a couple of fast food franchises operated by KBR to feed Trumps goons.

A side issue–A year or so ago, Trump went on a crusade about the architectural style of Federal buildings. He wants them all to be Neoclassical–white marble, columns, pediments, etc. He and the Federal staff said some derogatory things about modern buildings–basically they’re all ugly and modern architecture has no place being used for federal buildings.

The Federal Courthouse here is unabashedly modern, done by a New York firm (KPF) known for that style. It’d be worth looking up Trump’s comments, and quoting them,and asking, “Why are you so interested in protecting a building done in a style you said has no redeeming value?” Best would be if he’d been quoted saying the modern buildings should be torn down, but I don’t believe he went quite that far.

a little off topic..but Wheeler showed up at a peaceful protest surrounded by un-identifiable police bodyguards?

How is this not absurdist?