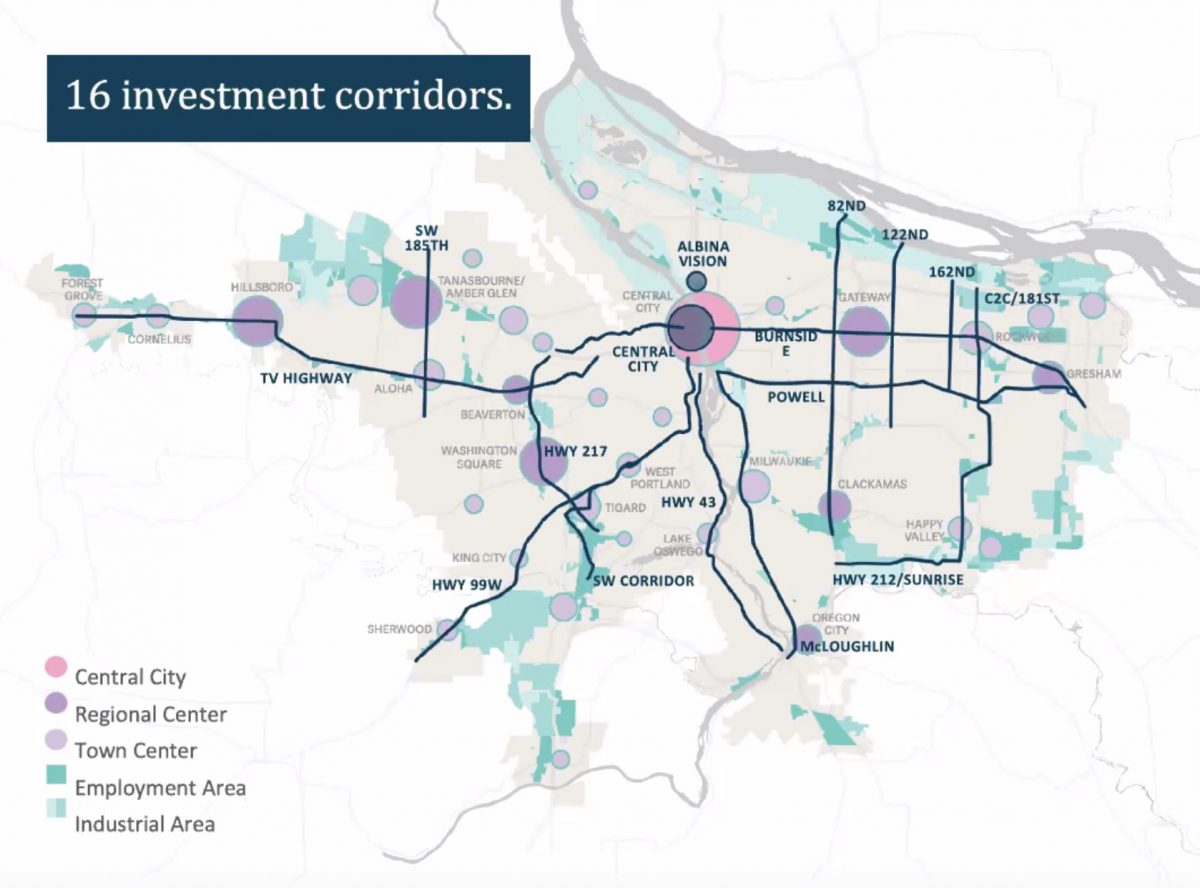 After 16 months of meetings and planning, the Metro Council will decide at their meeting today whether or not to refer a $7 billion package of transportation investments to the ballot in November.

Get Moving 2020 is being framed as a job creation measure that will put people back to work to build a slew of infrastructure projects across the region. Metro says the list of projects and programs will cost $4 billion and would leverage nearly $3 billion more in federal funding. To pay that local amount, the initiative would be funded with a 0.75% payroll tax on employers with over 25 employees and would kick-in starting January 2022. The package of investments are supported by a broad coalition of elected leaders and transportation, environmental, racial and social equity groups.

In a letter of support written on July 7th (PDF), members of the Getting There Together Coalition wrote, “We recognize the opportunity we have right now to come together around a community-built plan, to begin to take meaningful action that builds a more equitable transportation system that works for all.”

Some activists think the measure invests too heavily in the SW Corridor MAX Light Rail Project and doesn’t go far enough to balance the modal playing field. Of the 16 corridors that would be funded, the MAX line would is pegged to receive nearly $1 billion of it. Beyond that project however, the measure would invest an unprecedented amount in key corridors like Tualatin-Valley Highway, 82nd Avenue, the lower Albina area, and others. If passed by voters it would fully fund PBOT’s Central City in Motion network of protected bike lanes.

(Just a few of the proposed investments.)

According to Metro project manager Tyler Frisbee who attended the Portland Bicycle Advisory Committee meeting on Tuesday, the projects were spread around the region with the specific intent to, “Make sure the benefits support everyone in the region, particularly those left out or harmed by previous transportation investments.”

Interestingly, Frisbee said the investments would create “safer” streets, not “safe” streets. She made the distinction in direct response to the recent protests around racist policies and police brutality. “I will talk about safer streets, not safe streets,” Frisbee said, “Because no street and no public space is safe when people are not protected by their government or systems of power.”

Over two-thirds of the proposed investments will be spent on transit and safety-focused projects and programs and 60% of the projects would be built in “equity focus areas”.

Hanging over the measure is organized opposition from business groups and companies including Nike and Intel. According to The Oregonian, business interests say the measure would hurt the economy and fail at the ballot. They plan to invest $3 million into an opposition campaign to fight it.

So far Metro Council President Lynn Peterson has pushed back against these threats and is expected to formally adopt the measure and send it to the ballot.

Bond referendums depend somewhat on voter turnout: Overall low turnout means that mostly older people voted and they tend to vote more conservative and against raising taxes. High turnout is more dependent on younger people turning up to vote, while older voters are more likely to already have a habit of voting every November.

Feeling fairly certain that there will be no issue of low voter turnout this presidential election year.

That will be one big *NO* vote from me mainly because the wildly inefficient MAX project.

I hope this fails, not because we don’t need transit options but because I think we should demand better of these massive projects. Light rail is not a viable option for this alignment and this whole bond reeks of pork.

Right there with you. The regional transit planning/sausage-making process continues to spit out expensive-but-mediocre projects that fail to meaningfully transform how we can get about the region—either through using the wrong tool or by selecting alignments that miss the centers of gravity in a corridor.

But I am a bit conflicted about the package overall, as there are some corridors included that really need investment.

Every light rail line besides the original blue line has been an expensive boondoggle. All this money could have gone to a good bus system that serves more people. Instead, now we are pretty much locked into fixing the steel bridge or building a subway downtown or whatever crazy expensive fixes we need to keep the light rail working.

There are some worthwhile projects on the list, but getting street lights and crosswalks on 82nd or TV highway should not be tied to a $3 billion light rail to Bridgeport.

Chris I
Reply to  Tom

The yellow line was done for a reasonable cost, and would be extremely useful if Clark County had played ball and allowed it to run into downtown Vancouver.

The Orange line was also expensive, but I think the money spent on the Tillicum bridge was worth it. It benefits several modes, including busses.

That’s PBOT’s strategy. Token projects in the east county that get votes while the majority of the bond goes to pork in the affluent neighborhoods in the central city.

BS, cmh. Every other quadrant of the city has light-rail service, including the affluent NW, but not SW Portland. It’s SW Portland’s turn, plus we need to get those many SW Portland and Tigard and Tualatin and Sherwood commuters out of their cars and onto public transit. If you don’t live here, you don’t experience the gridlock.

I’m in Washington County, and in May we voted on 4 tax increases at a time when it appeared the economy was nose-diving straight for the ground at Mach 5. I voted against every one of them. Every one of them passed.

This one will fail because the payroll tax is only for private employees (government employees are exempt). It has zero chance of passing IMHO.

I found it really hard to find a link to the full package, so for anyone else looking:

All of those links appear to have been deleted. I also want to see a detailed project list. What’s Metro trying to hide?

I am shocked that Nike and Intel, who already have high-capacity transit serving their campuses, and who make sure to carve up Washington County like swiss cheese to avoid paying taxes, would oppose this.

Tom
Reply to  Chris I

Intel and Nike and their big suburban campuses aren’t really well served by light rail because you’d have to walk a mile to your desk from the MAX stop. Most of their workers live up in Bethany and drive to work. These projects won’t benefit them much but they will pay a big chunk of the tax.

True dat, Tom. Almost every Intel and Nike employee drives alone to work. Don’t be caught on a street near their campuses between 3 and 6p, or you will be run over.

Interestingly, Frisbee said the investments would create “safer” streets, not “safe” streets. She made the distinction in direct response to the recent protests around racist policies and police brutality. “I will talk about safer streets, not safe streets,” Frisbee said, “Because no street and no public space is safe when people are not protected by their government or systems of power.”

A point well-made. Perhaps in response this measure should be looking at investments (or at least money for studying) addressing broader notions of safety in the street—this statement coming as it does from the “government” and one of the “systems of power”.

If Metro is intending to use part of this bond’s proceeds for police reform and “justice issues”, I hope they’ll make that clear to voters. I don’t know if that would strengthen or weaken support for the measure.

Depends on what reforms they have in mind. I’d guess they will not specify anything in particular because they don’t have a clue what they are talking about, but that’s just my guess. The money will just be pork, wasted like the vast majority of money government takes from us.

Fully funding the central city in motion plan and giving funding for albina vision would be such positive game changers for Portland! Looking forward to helping this pass.

City of Portland needs to tax itself for those things. Those are not financial responsibilities for the rest of the Metro region who don’t even have sidewalks or buses.

On the other hand, the region (and entire state) rely on the I-5 connection through historic Albina. The transportation system is just that—a system, not individual discrete parts.

Chris I
Reply to  Ryan

When ODOT razed hundreds of houses in N Portland to make I-5, Portland forever lost that land as a source of property tax revenue. Can we start taxing ODOT for the land they took from our City?

Couldn’t agree with you more, Ryan. SW Portland taxpayers have funded transportation improvements all over the city. Now it’s their turn to get some improvements. If we’re all in this together, you can’t cherry-pick which areas get improvements – we all deserve a piece of the pie.

I was all for this 9 months ago, but the affect of Covid-19 hitting us right at the end of a 40 year debt super cycle and a 10 year asset bubble might have consequences for the metro area most of us can’t even imagine. The longer the virus hangs on the worse things will be. With the ongoing collapse in brick and mortar retail and commercial real estate there may be parts of town that no longer need more transportation solutions. We may have to triage parts of town with too many empty buildings and not much transportation currently in place. With its proximity to the federal wildlife refuge perhaps Tualatin and Sherwood would be better as natural areas than habitation for humans. Let’s see how things shake out before we spend 7 billion in the wrong places.

You obviously don’t live in the part of town you are talking about, bikeninja. If emptying out some areas is such a good idea, your area should go first.