A project that will result in major changes to Gateway Green Bike Park is shaping up. The park is currently closed to public access as the Portland Parks & Recreation Bureau leads a $5.75 million buildout that will bring much-needed upgrades to the park and help it grow beyond its “beta” stage.

Gateway Green opened three summers ago and proved an instant hit with the thousands of Portlanders who love riding bikes on trails, on dirt, on jumps, and on pump tracks. The Phase 2 construction is well underway with contractors moving tons of dirt in an effort to bring the park up to city standards and add new riding features and visitor amenities.

Previously a 25-acre parcel of dirt that was not ADA accessible, had no running water, no paved gathering space, no bathrooms and no electricity, the current project will remedy those deficiencies and much more.

I rolled over on Tuesday to take a look at how things are shaping up.

The south end of the park has been entirely regraded. A new “Spine” road with wide turns and a gentle, 5% grade has been created (I’m not sure if this will be paved or just hard-packed dirt/gravel). The Spine road will be usable by all types of riders and will connect the south and north sections.

The old trail that used to wind down the big hill on the south side has been removed; but it will be added back and a new “gravity-oriented” trail will be added to the hill. According to project partner NW Trail Alliance, “Changes will be made to the existing Toe Line Trail, the existing advanced jump line will be re-built, the existing pumptrack will be re-located to make room for a future asphalt pumptrack, and existing skills area will be refreshed.” 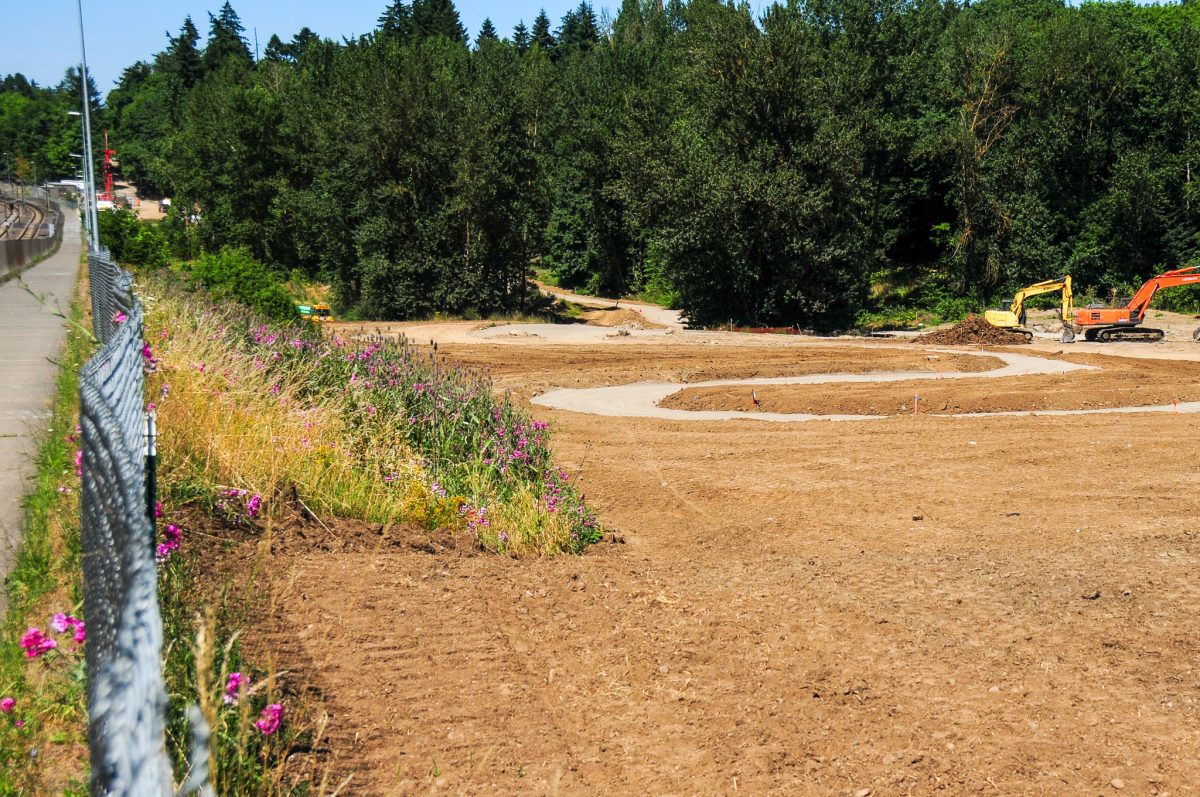 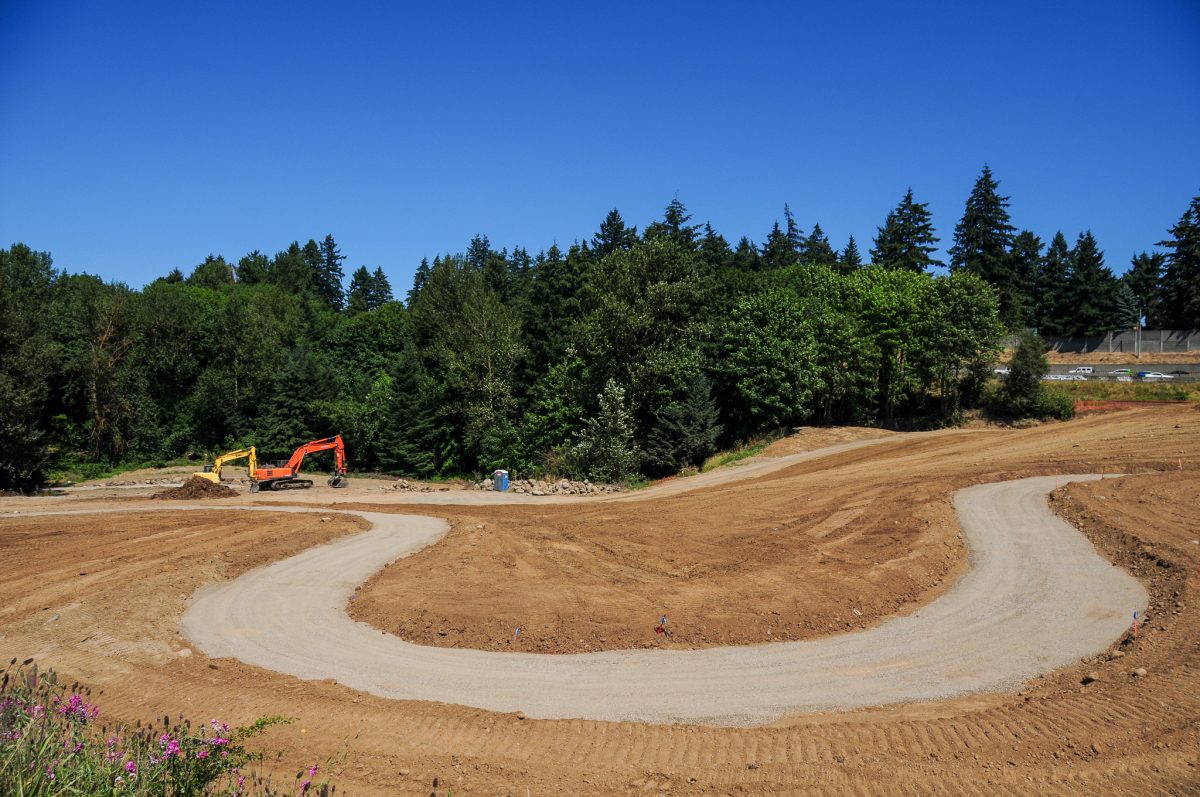 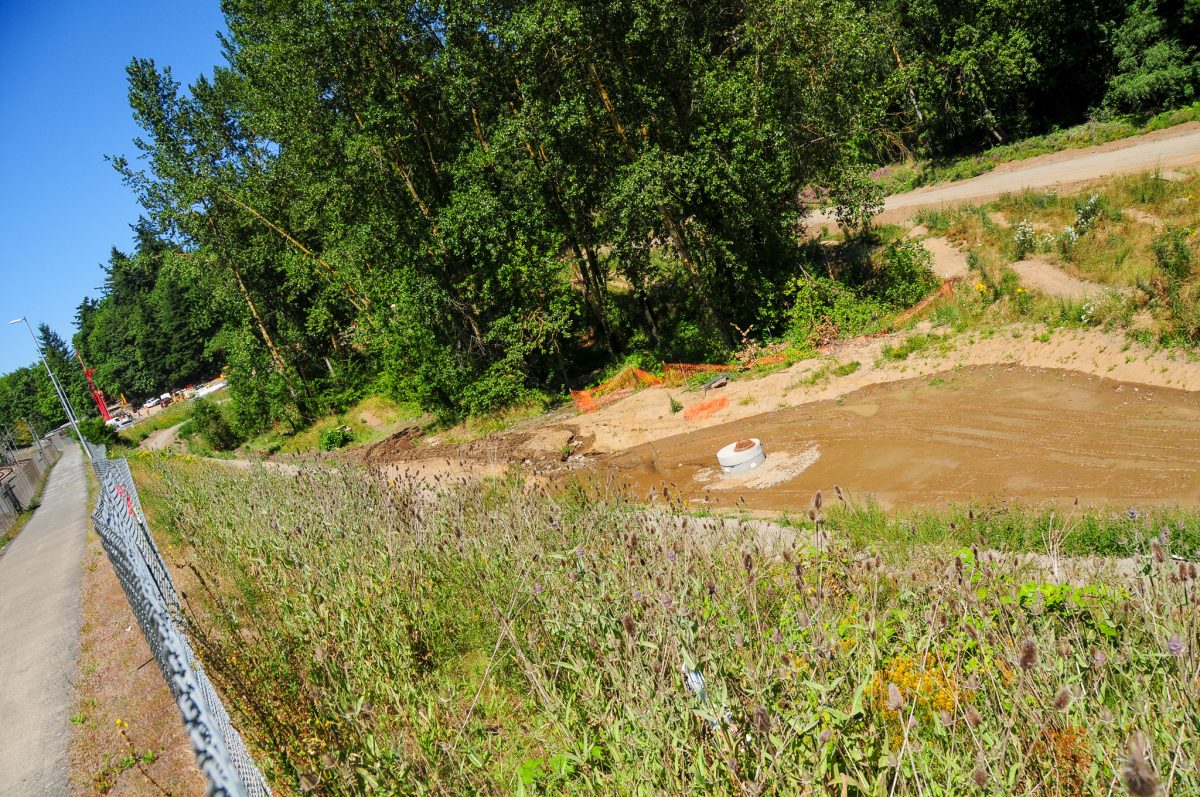 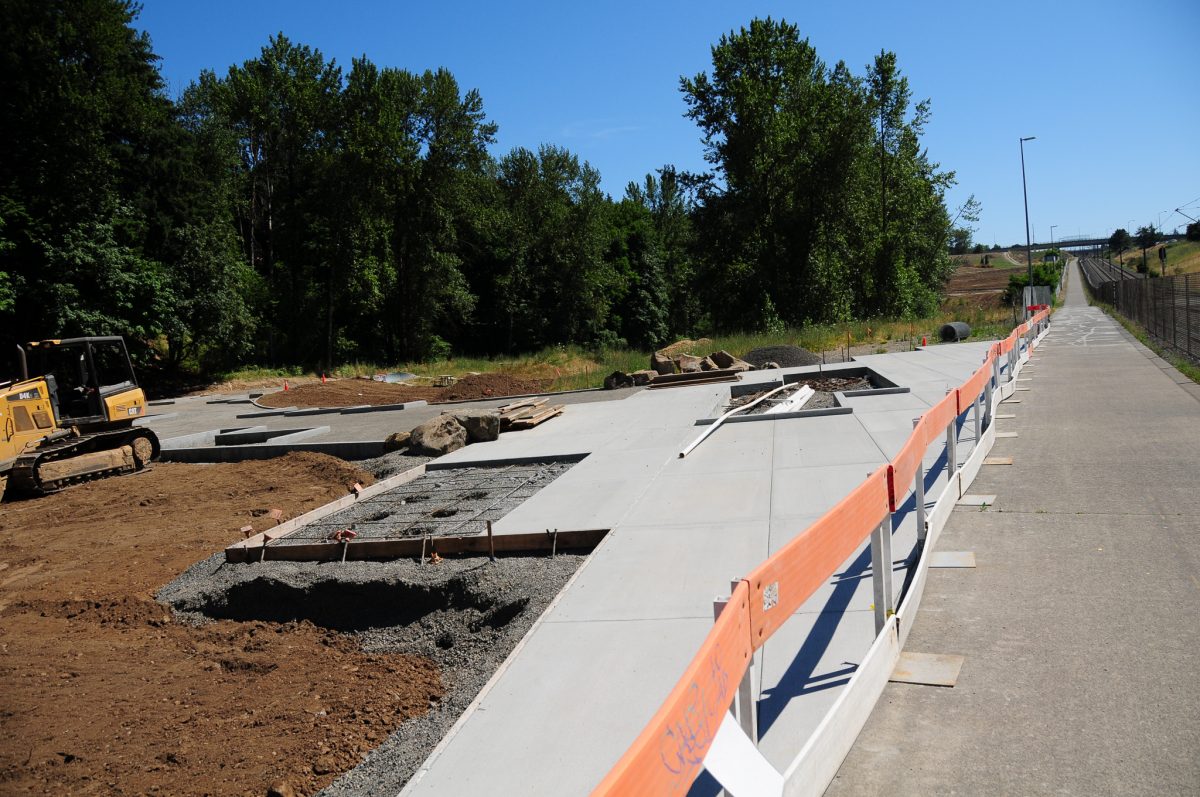 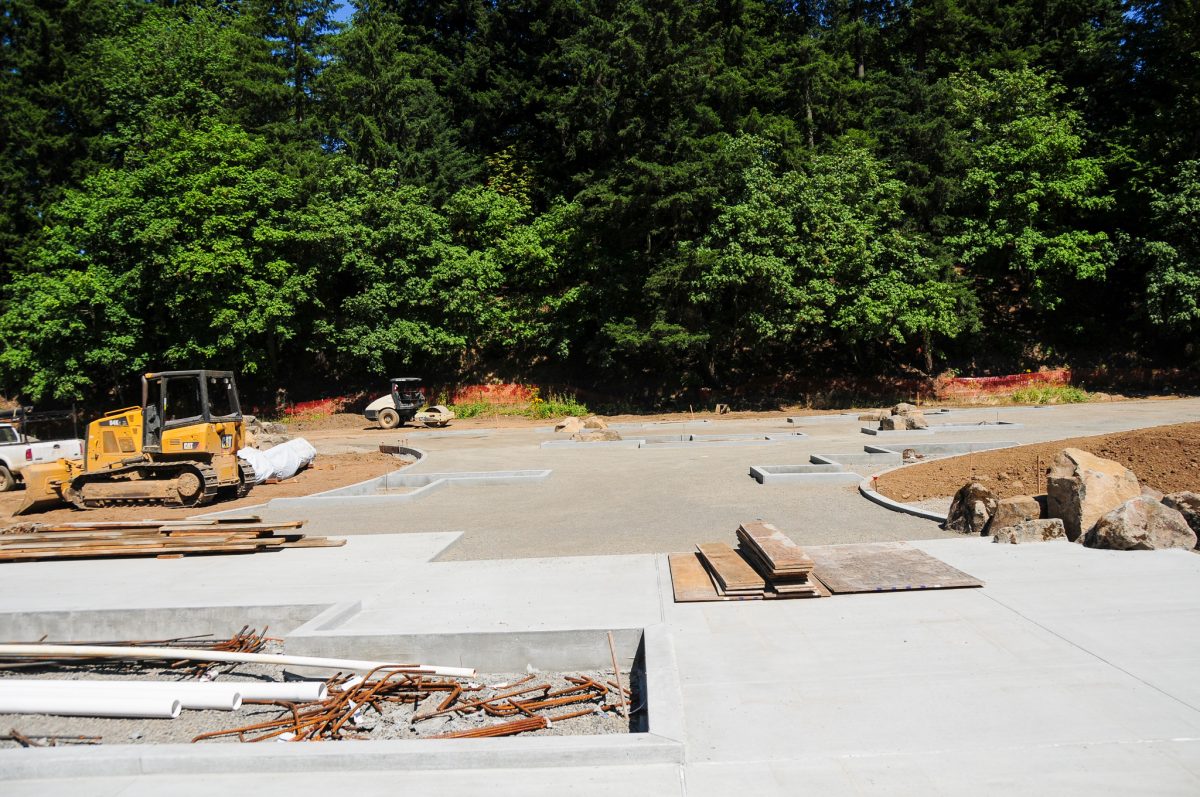 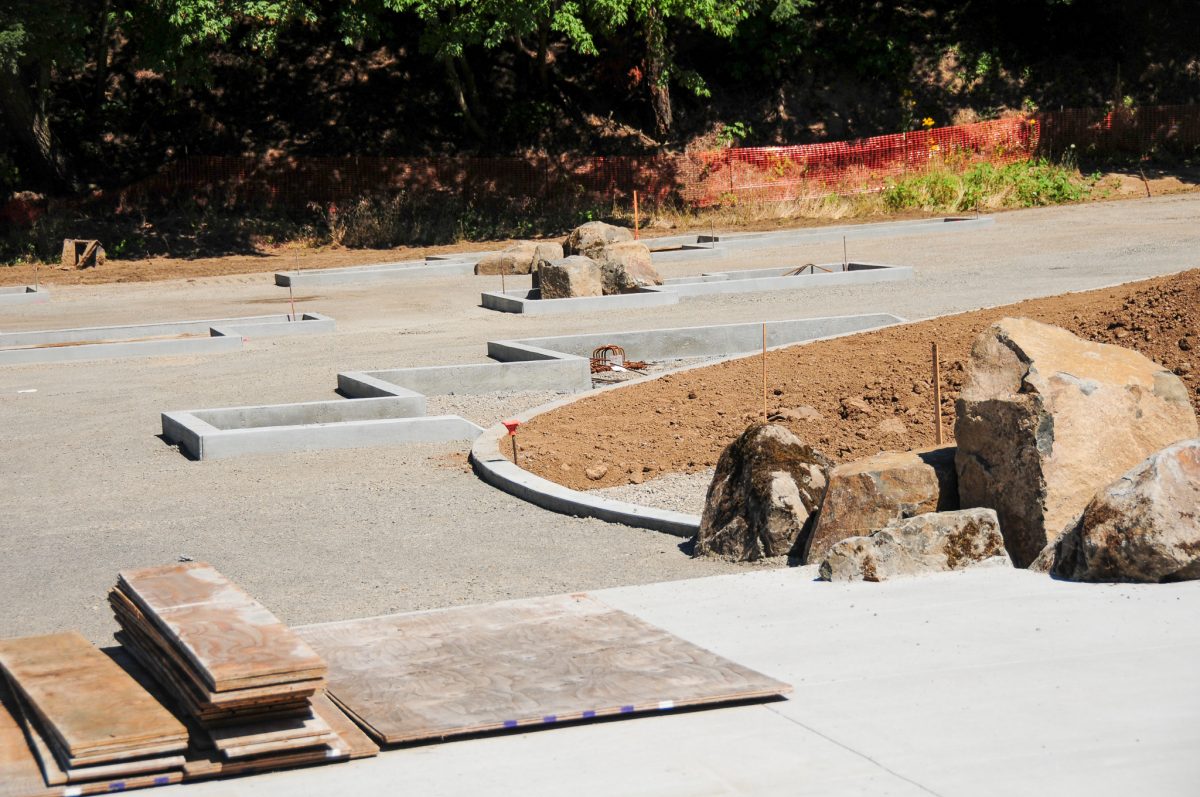 As you can see in the photos, a new main entrance in the middle of the park will be fully paved. You can expect a new Portland Loo (bathroom), drinking fountains, and $1 million in “habitat enhancements” thanks to funding from Metro.

Phase 3 is still to come and will include another entrance and new path/bridge on the south side as part of the TriMet Better Red light rail project we reported on last week.

Be advised that the park is currently closed and is scheduled to re-open later this fall.

How are they getting such heavy equipment in and out of the job site?

You’ll see in one of the photos I mention a construction access road. They’ve built a new road that runs along the heavy railroad right-of-way adjacent to I-84. Not sure if that will go away in the future but it’s there now and being used by construction trucks.

I believe that road runs right under the I-205 overpass, connecting with Halsey St. near 92nd. Can we just lay down some asphalt and make that an access point? That would be a huge deal for those of us living west of I-205, and north of Glisan.

There’s a plan to build the I-205 undercrossing path under the bridge there, but it jogs way up to Hancock, I’m hoping it also tees into the Halsey St Frontage road. That would be a straight shot from the planned Halsey Safety and Access to Transit bike lane going east on Halsey from 82nd to 92nd.

When will the access to Halsey or Hancock be completed? Is it part of the current construction plan? or will we have to wait? This will be a key access point for everyone along the Tillamook bikeway and all points west and will allow cyclists to avoid the Halsey overpass, the Gateway parking lot and the Max station tracks. I’ve been waiting a long time for this portion to be built but I cannot see any construction going on on the west side of I-205.

the Spine Road will not be paved in an accessible surface. It will be gravel. explicitly to discourage road bikes. This will be discouraging to people using mobility devices, bike trailers, or biking with kids in tow. Even though a section of this road will connect the new bridge between the 205 MUP and the gateway transit center, this section of the path (the “accessible” section), will not have lighting, either. I think it is extramely short-sighted, and possible in violation of ADA guidelines to not pave this connection, and from a transportation perspective, not lighting this connection greatly reduces its function as a path connection between the 205 MUP and transit. Missed opportunity, IMO

Thanks for clarifying that. It makes sense to me that it won’t be paved since this park is specifically set aside as an off-road cycling area. A lot of people with adaptive bikes, mobility devices, kids in trailers, and so on, can still use a road that is hard-packed gravel/dirt. Sure it’s not as easy but there is still the I-205 path directly nearby. I don’t know about the lighting situation or how exactly all the roads will connect to/from the new Gateway TC path. That will definitely be something to keep an eye on. Thanks for your comment.

Jonathan, thanks for this great write up and your response. I disagree with your premise however. Yes, Gateway Green is a park that supports mountain biking, but that is not the only use, and there are many recreational opportunities that should available to Portlanders of all abilities. A family with a family experiencing a disability may want to bring some bikes and a mobility device to the park using the MAX to share an afternoon in a natural setting where some family members bike, and others enjoy the natural features from the path or plaza. A gravel path excludes a significant number of these families. Also, this bridge is being built in part to address the ADA-deficient 205 MUP. Granted, there are other sections that do not meet ADA standards, but I maintain that we should be striving to provide accessible routes, and this is an important opportunity.

Regarding the lighting, this bridge and section of the Spine road is intended to provide an accessible option for the 205 path, but in addition to not paving it, they are also not lighting it. That means if you arrive my MAX and wish to head north on the path in the evening, you will need to backtrack through the Gateway Transit Center, cross multiple sets of tracks, and travel down the under-sized and steep existing MUP instead of being able to use the brand new, wide, beautiful path through a park. If this path were paved, it would not only serve as a an entrance to a park featuring mountain biking, it would also be a valuable piece of bike transportation infrastructure. As it is, it will exclude many Portlanders.

Only a guess, but I suspect that limiting the amount of added impervious surfaces might be one reason they aren’t paving it, particularly since they are adding new impervious surfaces via the plaza area. As for lighting this roadway, I might also guess that parks tries to limit light pollution for dark skies reasons (particularly if there is an adjacent lighted path). I know that we often have trouble installing pedestrian scale lighting for these reasons along roads when we are looking to increase lighting for peds/ personal safety. Not saying this is good or poor reasoning, just proffering some speculation.

Chris I
Reply to  maxD

Can they not use the I-205 path to access the plaza entrance at the bottom of the hill?

maxD
Reply to  Chris I

that route is not accessible- too steep and also pretty far out of the way.

I would think there would be some kind of paved path added from the north end of the new red line bridge, west to the “middle of the hill” part of the existing 205 MUP. That path would provide access for people coming to the park, as well. Sort of how the south entrance to the park is now.

The gravel surface was not designed to discourage road bikes, rather it was a cost consideration, along with the lack of lighting (not to mention the I-205 path run parallel. And it does meet ADA requirements.

This is beginning to look like a something that was a cool riding place for mountain bikes
and is being turned into junk by decision by committee ideas and and attempts to make it all things to all people. Does anyone go to Sandy Ridge or Rocky point because of the facilities? Nope. They go for the fun challenging trails that are absent from Portland.

I share your worry too, but I was told by NWTA that they have hired a top-notch trail crew to rebuild the MTB trails so we shall see. If they bring the paved pump track and revised skills area I think those are going to be awesome additions. I was a very, very frequent visitor and have been working/volunteering on this project for 10 years.

Chris I
Reply to  Jon

Once this is done, we will have more trails to ride, and bathrooms/water. This is a good thing.

Looking good! Can’t wait to get out there!