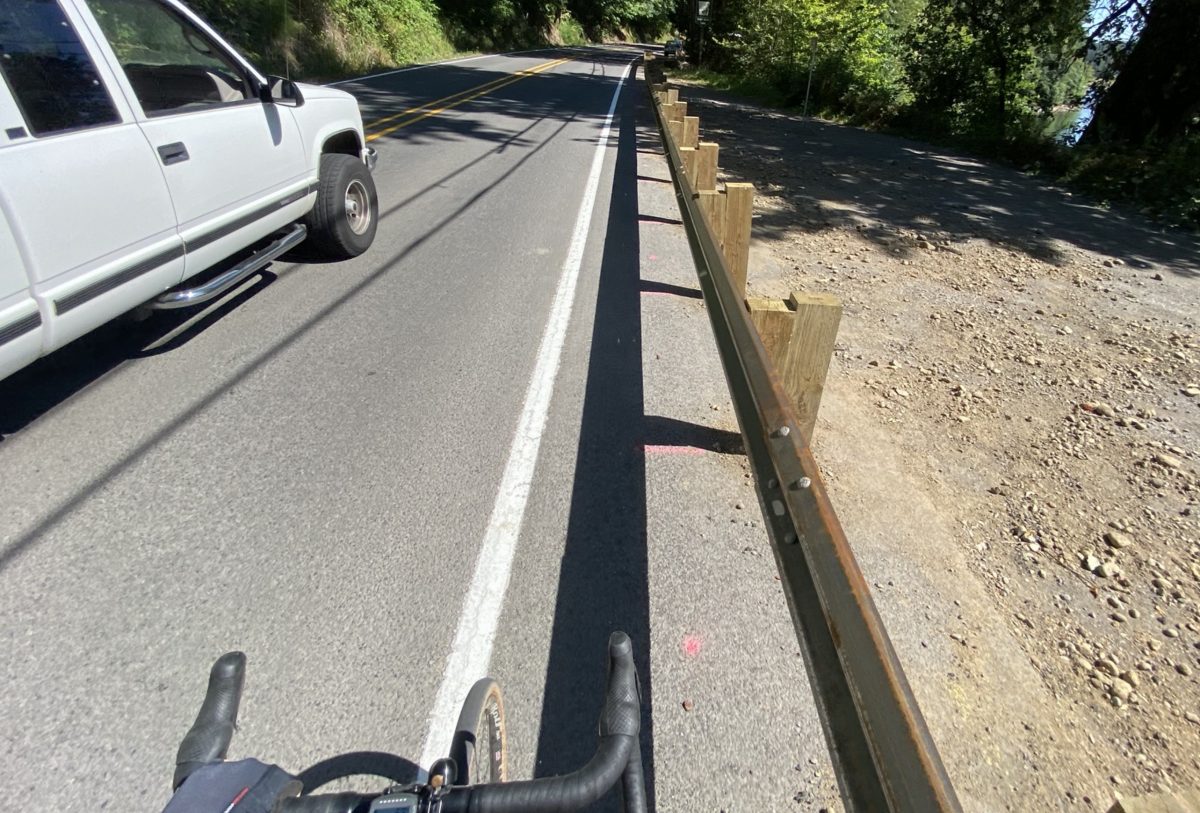 The presence of the guardrail — installed in the middle of the paved shoulder — combined with the shy distance leaves only about 1-2 feet of rideable space.
(Photo: J. Maus/BikePortland)

Late last month the Oregon Department of Transportation installed several thousand feet of guardrails in the paved shoulder of the Historic Columbia River Highway (U.S Route 30). The new rails, located just outside Troutdale along the Sandy River, were meant to keep people from parking and camping in undeveloped turnouts.

Unfortunately the rails had a significant and negative impact on bicycle users because they were installed too far into the shoulder. This route is an extremely popular and important part of many cycling routes. After we pointed this out, ODOT’s regional director Rian Windsheimer acknowledged that was the “wrong decision.” He said the rails were meant to be installed further away from the shoulder, but work crews realized there was a gas line underground and made a spur-of-the-moment decision to move the railing toward the travel lanes. Windsheimer also said two of the three sections of rails would be removed.

I was curious about how the removal work went and wanted to see which section of railings remained. So on Monday I rolled out for a test ride and a closer look. What I saw was disappointing: The remaining guardrails are still dangerous and the removed ones have left behind a pock-marked shoulder full of gravel.

Here are photos of the section that remains:

Windsheimer’s statement made it seem like he had ordered staff to rectify the situation. I assumed that meant the section left in the ground would be relatively innocuous; but I was wrong. The section that remains, just north of Tad’s Chicken ‘n Dumplings where the official Columbia River Gorge Scenic Byway begins, reduces the space for cycling and creates a hazard. The guardrail juts into the paved shoulder and it forced me to ride directly on the fog line instead of comfortably inside of it. The width of the remaining shoulder is only about three-feet wide for most of the 1,000-foot railing section. Add a shy distance (space needed to have breathing room away from the railing) and I was left with only 1-2 feet of usable space.

That width is substandard even by ODOT’s own published design guidelines. ODOT’s Bicycle & Pedestrian Design Guide (PDF) recommends a width of five or six feet. “Shoulders adjacent to a guardrail or other roadside barriers must be 5 feet wide, as cyclists will ‘shy’ away from a vertical face,” the guide states. A chart in the guide says rural arterials with over 400 cars per day should have shoulder widths of at least six feet.

As for the sections that have been removed, ODOT has not cleaned up after themselves very well. Dozens of holes where the guardrail posts once stood are now filled with gravel. The gravel is spread all over the shoulder and the holes have created bumps. These holes mean that bicycle riders have to choose between running over them (which could cause a crash) or riding to the left of them — which puts them right back near the fog line just like the guardrails themselves once did!

This entire episode is frustrating and should have never happened. I’m hopeful ODOT will return to do a better clean-up job and that they will remove the remaining section of guardrail. Stay tuned.

Well, it seems like the first person to go to hospital because of ODOTs fabfricated potholes could at least sue them.

Guest
Shawn in the Gorge

Does ODOT have anybody in their project management department that rides a bike? I am confronted by these kinds of design flaws all the time. Bike riders, along with pedestrians and other slower vehicle road users are continually treated as secondary users. I will not be engineered off the road until the citizenry chooses to prohibit my use of the roadway in question. In a situation such as Jonathan shows on the Columbia River Highway (CRH?), I simply ride out in the lane. Typically when a rider is away from a side barrier, they are easier to see by an oncoming motorist anyway.

If only:
“Late last month the Oregon Department of Transportation installed several miles of bike paths along the shoulder of the Historic Columbia River Highway (U.S Route 30). The new bike paths, located just outside Troutdale along the Sandy River, are meant to keep people safe from traffic.

Fortunately the paths are having a significant and positive impact on bicycle users because this route is an extremely popular and important part of many cycling routes. After we pointed this out, ODOT’s regional director Rian Windsheimer acknowledged that was the “best decision he ever made and waaay better than that stupid guardrail idea someone tried to pull off.”

“I’m hopeful ODOT will return to do a better clean-up job and that they will remove the remaining section of guardrail.“

Unfortunately I don’t share your optimism. The should repaving fiasco on Hwy 101 back in 2013…

https://bikeportland.org/2013/08/28/odot-considers-repairs-caused-by-repaving-project-on-highway-101-93191
I was back this week (Oswald West area) walking along the shoulder for a few miles, and retook the photos I took back then.
It never got fixed(!) Since I don’t know how to post photos here I emailed you one.

This “solution” to the problem created by the hazardous guardrails/barriers is just so depressingly on-brand for the age in which we are living. I find it helps my mental health to just always expect the worst and dumbest outcome in situations like this…makes the disappointment hurt less.

This new line of small potholes are arguably more dangerous than the guardrail they once contained, as they’re tough to see, and will not only spread gravel around as vehicles drive over them, but deepen and become more hazardous over time. I suppose it is possible that ODOT intends to come out and fill them with asphalt and make them smooth, and reinstall the guardrail farther back, but then again….that would make far too much sense.

Looks like this has entered the “Geez, you asked us to take them out, so we took them out, and you’re STILL complaining. There’s no pleasing you people” phase. Which came right after the, “Oh, they want them taken out now? Sure, we’ll take them out” phase.

I’ve been deliberately avoiding this route due to this. The potholes pictured were my exact expectation for the demolition results. It’s a bummer because as the temperatures climb into the 90’s next week, this stretch would have been a nice break from the heat. I don’t want to deal with the risk as it is and the bummer feeling of seeing what this is now compared to what it used to be.

By all means, this should be fixed but I have to be honest: going there on on Sunday looking for a problem, I couldn’t find one.

Seems like I only know the curves of and diversions off that road, while others have it down to pebbles in the tarmac.

Last I knew all ODOT projects were reviewed by the Bike/ped team in Salem. Maybe they called this a maintenance project and it never went in for review. Has anyone asked who the transportation engineer was that stamped the plans. Placing guardrail in the middle of a paved should hardly seams like standard of care.

Placing some boulders in the dirt area would be cheaper, easier, and still just as effective, while not impacting safety or damaging the roadway. ODOT seems to have an endless supply of boulders.

Sad to say I was lulled into a “false sense of [institutional] security”…thinking that the re-fix would be carried out with more care since it was pointed out by this discuss as something simple to avoid & a project under the gaze of the ODoT HQ…perhaps the inspectors are on vacation or furlough?

So how about making some lemonade out of this mishap in sections they have kept the guard rails…now that it is a substandard / deficient width roadway/ no shoulder…grind out the centreline and add two advisory bike lanes..while bring down the speeds? [Has any PSU TREC students studied this scenario yet?] I am assuming COVID19 has reduced the traffic volumes (while traffic speeds have aggressively increased).

I drove past this section on Sunday. Wow, the gravel potholes from the post removal are looking rough. Plus, the riverside road section from Dabney to Lewis & Clark was PACKED with the summer crowds’ double-parked cars and people walking in the road. If only there was a better way to handle all these people and private vehicles… Hmm, close the shoulder for an awesome protected bike lane, and add a parks shuttle with parking at a lot in Troutdale? Bend has an awesome city-run tubing bus with a trailer for your tubes, it seems like there’s an opportunity here…

I rode the highway this morning and ODOT has filled the holes with asphalt. Unfortunately, they have not really flattened the asphalt down or left deep impressions where the holes were. Shoddy work.