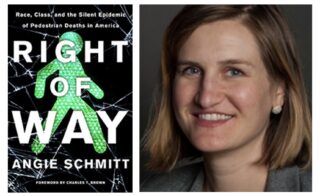 At an online meeting next week hosted by local activism group Bike Loud PDX you’ll get the chance to hear from a leading expert on the connection between America’s pervasive car culture and a startling rise in deaths of vulnerable road users.

Angie Schmitt’s new book, Right of Way: Race, Class, and the Silent Epidemic of Pedestrian Deaths in America (Island Press), is due to come out on August 27th and has already received an excellent review from Kirkus (a big deal in the publishing world).

In the book, Schmitt breaks down the policies and products that have contributed to a 50% rise in pedestrian deaths in the last decade.

“The tragedy of traffic violence has barely registered with the media and wider culture,” states the book’s publisher. “Disproportionately the victims are like Duarte-Rodriguez—immigrants, the poor, and people of color. They have largely been blamed and forgotten… Right of Way is a call to reframe the problem, acknowledge the role of racism and classism in the public response to these deaths, and energize advocacy around road safety. Ultimately, Schmitt argues that we need improvements in infrastructure and changes to policy to save lives.”

You might recall Schmitt’s talk in Portland last summer where she discussed how the increase in deaths is tied directly to the increase in size of many popular cars, trucks and SUVs. In addition to addressing racist and classist policies, Schmitt said, “I think it would be really helpful if people got more engaged in what’s going on with federal regulation of cars. That’s something that’s been missing from this movement.”

The Bike Loud interview and Q & A will be held online July 15th from 5:15 to 7:15. More details on the BikePortland Calendar.

Personally I think the auto industry ought to follow the direction of the Maltese auto company. Unfortunately they have only made a little over 50 cars.