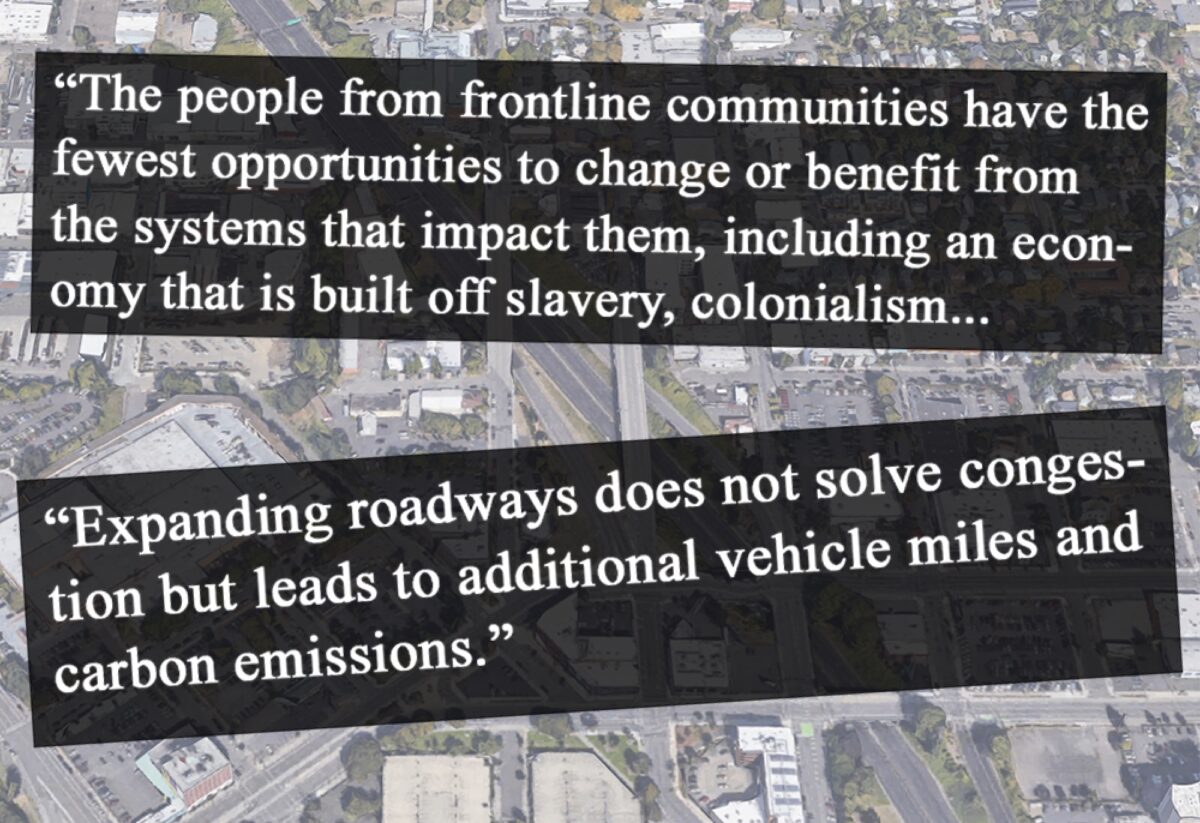 In normal times, major changes to important policy documents happen at a glacial pace. These are not normal times.

When Portland Mayor Ted Wheeler released a draft of the city’s Climate Emergency Declaration back in mid-February it was just under 1,800 words long. The one that will get a public hearing and vote tonight (6/30) is nearly 5,000 words long.

The new document reflects the urgency of two crises — the Covid-19 pandemic and the fight to end racism and police brutality. The declaration now includes stronger language about the climate impacts of transportation policy and it puts the blame for current inequities and remedy for solving them in the future on the pervasive impacts of systemic racism.

Many of the additions have to do with who is impacted by climate change, why it hurts some more than others, and who will have power as we fight against it:

For example, the second whereas statement used to read:

… the people from frontline communities have the least opportunities to change or benefit from the systems that impact them, including the extractive economy.

And it now reads (additions in bold):

… the people from frontline communities have the fewest opportunities to change or benefit from the systems that impact them, including an economy that is built off slavery, colonialism, and the unsustainable extraction of natural resources, and they must be the ones that benefit first from the transition to a clean energy economy and be able to lead the planning and implementation efforts to address climate change.

The initial draft barely touched on transportation, but the new draft includes these new statements:

Be it further resolved, that the Portland City Council [missing word?] on freeway facilities in Portland before approving additional lane-miles and Portland will evaluate and advance equitable congestion pricing strategies within existing roadway will require the Oregon Department of Transportation to include dynamic pricing capacity in Portland; and

It’s not clear if that statement would apply only to future projects or if the City of Portland has the ODOT-led I-5 Rose Quarter project in mind. In a summary of the declaration released on Friday by the Bureau of Planning & Sustainability, they said that statement on “freeway facilities”, “Requires ODOT to put dynamic pricing is [sic] in place on freeways before Portland City Council will approve additional lane miles.”

The City of Portland finds itself in the awkward position of being a partner with the State of Oregon on this very controversial $800 million mega-project that will expand I-5 and exacerbate many of the negative impacts the freeway had on Portland’s largest Black community when it was first built in the 1970s. Recent committee meetings about the project revealed weakening support and increased ODOT skepticism in the wake of protests over the death of George Floyd.

When it comes to promised actions, the declaration has several key additions that relate directly to transportation.

The new version includes this promise about a “green infrastructure action plan”:

Be it resolved that Bureau of Environmental Services, the Bureau of Planning and Sustainability, Portland Parks & Recreation, and Portland Bureau of Transportation are directed to collaborate on the creation of a citywide integrated and prioritized green infrastructure action plan to: 1) help achieve the goal of a healthy connected city for all; 2) maximize the benefits of green infrastructure investments in reducing carbon emissions and preparing for climate change impacts; and 3) build on, connect and enhance the existing network of green infrastructure initiatives being led by community, non-profits, businesses, and other governments.

In related news, Multnomah County has released their final progress report on the 2015 Climate Action Plan, saying, “future iterations of climate planning will go beyond a focus on equity, to have a more explicit focus on climate justice and centering the voices of front line communities.”

Portland City Council will host a virtual public hearing and vote on the Climate Emergency Declaration today (Tuesday, 6/30) night from 6:30 to 8:30 pm.

“Equitable congestion pricing” is an oxymoron. From what I know, congestion pricing is inherently non-equitable unless the price is proportional to income. And I have no confidence that Portland or ODOT will implement such a system.

Middle of the Road Guy
Reply to

I saw that also and had the same thoughts.

How would that be accomplished and should it? I mean, why not just have a sliding scale on all goods?

Reply to  Middle of the Road Guy

That is a good question that I don’t have the answer to, and why I think that implementation is exceedingly unlikely.

As to your second question, I think it’s important to distinguish between essentials (e.g. groceries, healthcare) and non-essentials (e.g. restaurants, vacations). I believe that the former should be priced proportionally to income, while the latter shouldn’t. Where the line should be drawn in the sand, that’s up for debate.

Is driving essential, or non-essential?

stephan
Reply to  Chris I

You can make it equitable by transferring money back to people, depending on their income.

Reply to  Chris I

I’d argue it depends on the reason for the driving (e.g. getting groceries versus going to a bar). But I don’t see any possible way to separate essential versus non-essential trips and charge different tolls for each — way too easy to game — so I can’t in good conscience support classifying driving under anything other than the income-proportional price rule.

“Be it further resolved, that the Portland City Council on freeway facilities in Portland before approving additional lane-miles and Portland will evaluate and advance equitable congestion pricing strategies within existing roadway will require the Oregon Department of Transportation to include dynamic pricing capacity in Portland”

I have met numerous government lawyers who really speak this way.

“that the Portland City Council on freeway facilities in Portland before approving additional lane-miles and Portland” is the subject of the sentence, essentially a very long noun. The City has effectively no powers over freeways in Oregon, so you can probably assume that Council will always go along with whatever ODOT tells it to do.

“will evaluate and advance” is the verb. It is meaningless = “We’ll think about it.”

“equitable congestion pricing strategies within existing roadway will require the Oregon Department of Transportation to include dynamic pricing capacity in Portland” is the object of the sentence. Again, it’s quite meaningless. It sounds like tolls, but it could be anything and nothing.

The whole thing is a sham.

I am as skeptical as the next person, but something might come of this. I was just reading an interesting historical analysis that described how often in history pandemics have led to widespread protests and social change. Particularly the spread of Cholera to the UK from the Baltic in the 1800’s. This was so well known that the upper classes were more scared of these uprisings happening than they were scared of the disease. Before Cholera had finished sweeping through europe many a Mansion was burned and more than a few landlords ended up on the business end of a pitchfork. Some even attribute the Russian Revolution a few years later to the poor handling of Cholera by the Romanov Dynasty. So the current turbulent times could bring about change in a short time that might take decades at other more normal times. The key is to get the change in the right direction.

When you say “right direction”, surely you mean in the left direction.

has this approach (tying tolls to income) been tried in any other country?

Oh I agree that it would be exceedingly complicated to implement, and that’s why I don’t believe it will happen.

Not all that difficult, really. Tolls these days are typically collected on EZ Cards or trackers in cars. One’s data from SNAP, food stamps, or subsidized public housing could be easily linked to these cards and trackers, for a lower toll rate or even for refunds.

I think the population in the Portland region has almost doubled since 1990. With more people you need more infrastructure like housing, utilities, parks, schools, and roads. So really it’s population growth that leads to more vehicle miles and emissions.

Chris I
Reply to  Tom

So we need to… Get rid of people somehow? How should ODOT implement such a program?

Somebody did not appreciate your comment, but the population increase is the problem in Portland. It was nice here. It’s awful now. Don’t worry just stare at your device.

Middle of the Road Guy
Reply to  Chris I

I’m wearing an onion on my belt.

It’s not population growth that’s the problem, it’s that poor people already in the state and the city must keep moving to wherever rents are most affordable, which tends to be further and further from where they work at their minimum-wage service jobs. I realize this is an odd thing to say about the “Urban Growth Boundary State”, but Portland has too much growing sprawl – inner Portland has essentially become a low-density wealthy suburb of your employment concentrations, that most of your affordable blue-collar family housing is around the edges of the city or in nearby Gresham, Clark County, Beaverton, and Gladstone. Until you start to allow 40-story Canadian high-rise apartments in Sunnyside, Overlook & Lauralhurst, you’ll continue to see increasing VMT (vehicle-miles traveled.)

Thanks, David. Portland and most US cities have so constrained growth with zoning (and zoning of racist origins, usually) that you don’t get the natural increase in density near the center that cities traditionally developed. Those inner SE bungalows have been remodeled and buffed appropriate to their status as an inappropriately located wealthy enclave of single-family houses that is preventing many more people of all income levels from living where it is most advantageous.