Two rides coalesced and took over major streets and bridges before meeting up at the Rose City Justice/BLM march basecamp at Revolution Hall in southeast Portland. From there they joined a massive march that took over Interstate 84 and ended on inner Northeast Alberta Street. 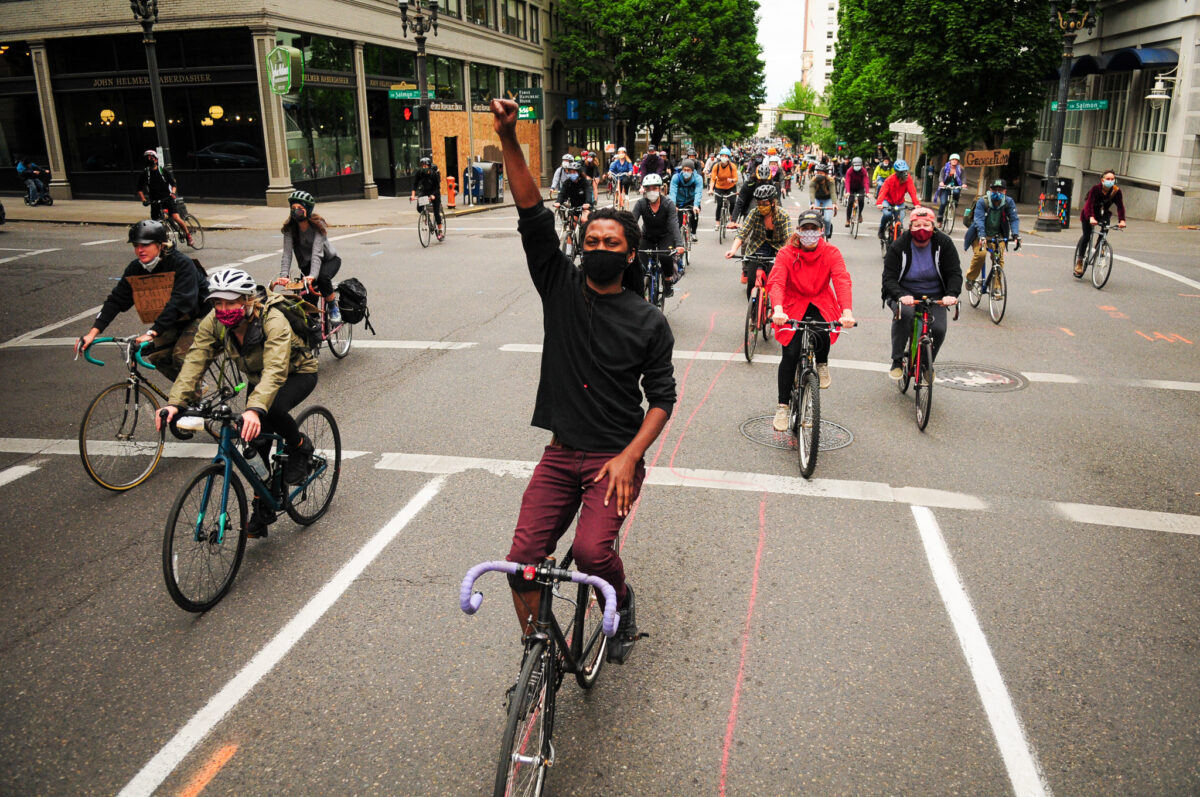 It was a night full of people power and powerful symbolism: We marched together, united, on a freeway that destroyed neighborhoods and continues to divide our community and we chanted “Black Lives Matter” with fists raised high in the air on Alberta Street where gentrification has exacted a huge toll on Black lives.

It all started at Rev Hall with the first meeting of the Bike Swarm in many years.

Riders looking to be part of the Swarm met around 4:00 pm. Working in support of Rose City Justice organizers, the Swarm is looking to become more organized and strategic as a protest support crew. These large-scale marches require a lot of traffic management and people on bikes are vital to “corking” intersections, directing drivers around marchers, and helping ferry supplies and intel through the long lines of protestors.

(The Bike Swarm is buzzing once again.)

Last night another facet of their work came to light: looking for white supremacists who’ve been allegedly assaulting people on the periphery of the protests. The leader of this ad hoc security force showed up with a long-tail cargo bike outfitted for the apocalypse. Acting with the endorsement of Don’t Shoot PDX and Rose City Justice, he said he’d lead a crew of riders to find antagonists and subdue them.

The Swarmers were about 200 riders strong and included one man towing a billboard that read “Void the PPA contract” (a reference to the PPB’s union, the Portland Police Association) and “Fire Frashour” (a reference to Ronald Frashour, a PPB officer who shot Aaron Campbell in 2010). They rode to Irving Park via Southeast Grand Avenue to meet up with the Pedal For Justice.

The two rides united at Irving Park and by the time they hit the streets, the size had swelled. At one point the ride was so large it stretched about six riders wide from mid-span on the Broadway Bridge all the way to I-5.

The Pedal For Justice started as an anonymous flyer posted to Instagram on Sunday. It spread like wildfire on social media among Portland’s well-connected bike scene. Led by a close-knit group of track bike riders who roll under the Still Pour banner (some of whom we profiled in 2018), we rolled out of Irving Park down Martin Luther King Jr Blvd. We took over Broadway across the bridge and into downtown then rode across the Hawthorne Bridge back to inner Southeast.

Cheers rang out as people gathering at Rev Hall saw and heard the massive wheeled march roll-up on the scene. People and their bikes bolstered the size and spirit of the protest. On the 11th straight day of marches and rallies, the addition of this mounted protest battalion must have felt like a shot-in-the-arm for the many dedicated (and tired!) organizers.

This injection of bikes and bodies in support of the protest was needed for what came next: A grassroots takeover of I-84.

In a completely unexpected move, protest organizers led the march down the freeway on-ramp at NE 16th near Benson High School. Corkers on bikes, motorcycles and in cars had already stopped freeway traffic in both directions and the wide concrete expanse of this usually car-dominated space was peaceful and quiet — except for loud chants of “George Floyd!” “Breonna Taylor!” and “No justice! No peace! No racist police!”

Falling rain lifted energy. Many people climbed over the center median and we had soon taken over both sides of I-84 before leaving the freeway at NE 33rd. We then walked north to the Alberta neighborhood.

There were so many moments of power and inspiration last night: The solidarity from so many different types of Portlanders; corkers standing courageously in front of cars and trucks to keep us safe; the vast size and loud voices of the march; the power and symbolism of taking over an interstate; and the awe-inspiring dedication and passion of young Black organizers who are leading this revolution.

thought you’d mention the pickup with trailer that tried to ram through and perhaps had a gun https://twitter.com/ABertolucci/status/1270195461140262912
see FB video

Chris I
Reply to  Josh G

That person was a outside agitator. I was at the back making sure people dont get run over w/ a crew. i have a video where you can hear and kinda see the truck ram someone. Everyone got out safe

“Acting with the endorsement of Don’t Shoot PDX and Rose City Justice, he said he’d lead a crew of riders to find antagonists and subdue them.” Yikes, not the kind of narrative for a peaceful march. As much as the antagonists may be ignorant assholes, they are entitled to their (vomits into mouth) free speech also. On the other hand if they were getting physical, all bets are off.

I should change that line. I didn’t say how he’d subdue them. He isn’t going to use violence, the idea would be to confuse and distract them and draw attention to them.

‘Your fight is my fight’

That caption has an incorrect translation which changes the meaning entirely. Strange, I was expecting 7 down votes!

Is it good praxis to post pictures of peoples faces at protests?

Is it good praxis to us cliquish leftspeak when voicing a valid criticism?

I don’t see the issue with it. This was a public event and no one is doing anything crazy. I’ve never had someone worry about this in all the past protests and stuff I’ve posted. What is your specific concern about it?

Thats something ive been dealing with Jonathan and want to know what i tell them? If your peacefully protesting you have nothing to worry about you’re using your right as a person living in the u.s.. Now if your retaliating against the police hen maybe you have a reason to worry about the issue

Middle of the Road Guy
Reply to  Rachel

Protests on a public road? No expectation to Privacy.

Chris I
Reply to  Rachel

“The Praxis ® tests measure the academic skills and subject-specific content knowledge needed for teaching. The Praxis tests are taken by individuals entering the teaching profession as part of the certification process required by many states and professional licensing organizations.”

These pictures are amazing, and the number of people who marched is inspiring–thank you for documenting the event!