The fight against racism and support for Black lives has coalesced our community into the largest protest movement our country has ever seen. It’s a revolution of American society and it’s happening because people are leaving their homes and showing up in solidarity on our streets. If you dream of changes to our oppressive and over-militarized police system and want to live in a world that is more just and equitable for everyone, these are inspiring and hopeful times.

If you have a bike, you have the perfect tool to get involved and to support this movement more broadly. There’s even an effort to formalize the use of bikes in support of the protests that might be familiar to some of you who were around during the Occupy Portland days.

(People and their bikes during last night’s march.)

I asked BikePortland readers about their experiences of having bikes at recent protests.

Paul (last name withheld) said he helped “cork” intersections at Tuesday’s protest. Along with several other riders he rode ahead of the march and helped stop cross-traffic. With seven bright lights on his bike, Paul commands a lot of attention and used that to his advantage to direct drivers away from hot-spots and bridge closures. He said it’s harder to move around large crowds with his bike, but also had advantages. “I used my bike to block a dude with a TASER from coming up the rear and I used it to help clear the area when PPB let tear gas fly,” he shared.

Mariana Mo loves the freedom and attention her bike brings during the protests. “You can go places fast,” she said, “And a lot of people will see you on your bike and may be motivated to ride one.”

Reader Joan (last name withheld), took her bike to Tuesday’s protest. “It helps with social distancing in a large crowd,” she explained. “Having my bike also meant I didn’t have to worry about getting home.” Transit and Uber/Lyft service have been unreliable amid various curfews and closures.

In addition to mobility advantages, Joan said her bike makes it easy to carry protest essentials like extra masks, sanitizer, snacks, water, and so on. I’ve also seen many people attach signs to their bikes, turning them into a rolling billboards for the cause. If you bring your bike, Joan recommends staying toward the edges of or rear of the march to make it easier to maneuver.

The Bike Swarm is back

If you were around during the Occupy protests in 2011-2012, you might recall this informal group of riders who came together to form the PDX Bike Swarm. The idea was to use bikes to support Occupy demonstrations and encampments by any means necessary. 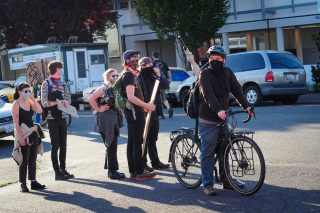 The Swarm’s first big showing was highly successful and it caught on quickly. The group kept meeting and riding into the winter of 2012 but eventually splintered and has been quiet ever since.

Sensing a rebirth of the Swarm spirit at these Black Lives Matter protests, one of the group’s veteran leaders, musician and activist Dan Kaufman (of Disco Trike fame) called a meeting on Tuesday. About 10 people showed up to discuss the future, strategies, and next steps. Kaufman has also met with protest leaders from Rose City Justice and says they’re very interested in the idea.

Kaufman announced today that the Swarm will meet with protest leaders and ride at 4:00 pm on Monday (June 8th) at Revolution Hall (SE Stark and 13th). Check the event listing for more information.

I wonder if using a shared bike (Biketown) or shared scooter (Lime Lyft Razor etc) to “Swarm” *vs. riding to and from a protest) would violate the service’s terms and conditions if anything happened?

I think the scooters are all off the street.

I applaud these folks for taking the risk and sticking it to the man. I do hope appropriate CONVID protection was used however. Yay bikes!

In regard to upcoming demonstrations, I’d be interested to know which events are led by Black organizations? While I think it’s important that everyone shows up in support of justice and police reform, Black voices should be the leaders here. I can see some of these events being easily co-opted by well intentioned white folks who do not speak for the Black community.

Rest assured this is top of mind for Swarm leaders. Kaufman (for one) is very aware of this and is humble and following lead of organizers.

I am a registered nurse of more than 20 years. I am glad that the protests are occurring and hope that changes are made. However, I am also extremely fearful that the Covid19 virus will spread heavily thru the ranks of protesters that are not socially distancing.
I humbly beg protesters to try other forms of protest than the big crowds currently gathering. I recently saw some protesters on various street corners, wearing masks and maintaining appropriate distancing. They have the right idea.
After all efforts to flatten the curve, I don’t want it all to have been wasted

Chris I
Reply to  Brian

What are your thoughts on the indescriminate use of teargas by the police?

I agree the crowds probably aren’t socially distant (or small) as would be ideal to prevent the spread, but there are a few things working in our favor. One, almost everyone is wearing masks. Two, it’s outdoors. Since we started doing distancing, we’ve learned more about what is risky and what isn’t, and exercising outdoors, even sometimes on relatively crowded trails and sidewalks, doesn’t seem to have substantially increased transmission. Ventilation is a huge factor in risk, and the outdoors are well-ventilated. Three, although people aren’t fully doing the 6-foot distancing that’s recommended indoors, they are not jam-packed as I’ve seen at other protests in the past. It also helps that (at least here in Minneapolis, and I’m sure in Portland too) close to a third of the people at demonstrations are standing or walking next to their bikes. If you’re walking a bike while marching it’s actually hard to be within 5-6 feet of someone else for any length of time.

It’s an experiment, for sure. We decided to start opening up our economy, to different degrees in different states. That was already underway, often to the consternation of some, but it’s an experiment and we will want to keep close tabs on the outcome.

This is just ridiculous. It’s not right to selfishly disrupt traffic.

People on foot and bicycle ARE traffic.

Not if they’re blocking an interstate and potentially hurting those in emergency vehicles trying to get help at the Providence ER. Marching on I-84 is dangerous to others and counterproductive.

Hi! How is the bike swarm ride a ride to the march if it starts where the march starts???

The revolution will not be motorized. ( from a tee shirt that I have).

The revolution will have to be motorized for many [sadly], as many bike share / scooter share systems shut down at the request of PD/ Mayors…and then there is the COVID19 concern of enclosed transit…plus these days the most “affordable” housing for is out in the ex-urbs…

Don’t worry, due to the efforts of the looting wing of the protests I expect close-in real estate to become much more affordable. In fact I expect super deals on those ground floor brick places in the pearl with the big windows and little porches in front.