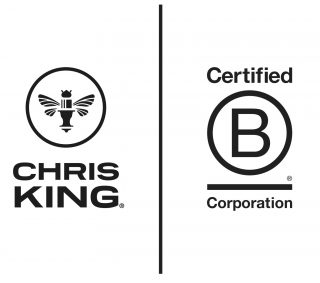 Portland-based Chris King Precision Components has adhered to a rigorous earth-friendly ethic long before it was cool. The company that was founded in Santa Barbara California in 1976 and moved to a former coffee roasting plant in the northwest industrial district in 2003, has a holistic approach to business that has strived to put people and planet before profits from day one.

“Since Chris King founded the company in 1976 we have operated with two goals in mind; manufacture high quality bike parts in an environmentally responsible manner, and have those parts outperform and outlast the competition, staying on bikes and out of the landfill,” the company stated today, in an announcement that they’ve completed the certification process to become a B Corporation.

B Corps must go through a rigorous assessment by B Lab, the nonprofit that manages the certification process. The assessment involves a broad scope of social and environmental impacts instead of just the bottom-line financials. B Corps must have a positive benefit on their employees, community, and customers, while also making earth-friendly decisions about the raw materials they consume and the sources they use to attain them. The certification also forces companies to a level of transparency that makes them more accountable to the public.

What does Chris King Precision Components do to be worthy of B Corp status? Here are just a few things:

In addition to the environmental and energy stuff they deserve praise for being a U.S. manufacturer of bike components. There are many places that design and distribute bike parts that are made elsewhere, but the ones that make it all here can be counted on your fingers. This is very important in these days of collapsing global supply chains and high unemployment.

Bikeninja
Reply to  Middle of the Road Guy

That is true if one looks at the immediate present. But if we had taken a different turn 40 ( or even 20) years ago and created an industrial policy that rewarded employee productivity with appropriate wages and created products with the lowest lifecycle cost ( all variables considered) we would be in a different spot today. Instead we tried to offset declining real wages with cheap disposable consumer goods manufactured offshore. This religion of cheap consumer goods to mask the effects of hollowing out the middle and working class. Once we could offshore most of the real work to slave wage companies it left us free to build a Potemkin economy based on services, vacations, real estate and financial schemes all financed with a growing pile of debt. The Corona virus has now collapsed that economic house of cards, and it will never come back. We must now move forward with honest, locally made products and locally grown food. One CK head set in a lifetime is not a bad economic bargin all things considered.

I agree with you and would add:

When we went towards reinvesting profits to bolster shareholder value rather than reinvesting in employees and higher quality goods.

Bikeninja
Reply to  Middle of the Road Guy

Reinvesting profits to bolster shareholder value is too kind an explanation of what has gone on. During the last 10 years most of the big corporations have used all their spare cash for stock buy-backs, even to the point of taking on debt to buy back shares. When companies like Boeing spend 50 billion dollars to buy up their own stock all it does it prop up the shares artificially and enrich stockholders, and especially officers like the CEO. Now when they are in trouble, companies like Boeing want a government bailout, which they would not need if they had not squandered their money on share buy-backs and had invested instead in modern plane designs.

Well, I can attest my CK headset that was installed in ‘96 is still going strong. They seem like a great company and strong supporter of cycling locally, so I am glad they call Portland home. Word is they are still at full employment right now and managing this current situation well. Cheers to all at Chris King!

Fantastic write-up! What an impressive company, I will feel even better to continue to support them!

They make stuff to last–not much CK in metal recycling bins.

Does CK make its own bearing-balls? Just wondering.

No – they make the bearing races, but not the balls.

Is there something about Portland B corps and being against unions? Because new seasons and chris king have some strange similarities

Chris I
Reply to  Timee

No. As small businesses with narrow margins, you can’t blame them for opposing unions. I’m in a manufacturing industry union, and it definitely hurts productivity. It’s basically impossible to get rid of the bad employees, and to reward the ones who work hard.

Have a Chris King 2Nut installed on my city bicycle for at least 10 years, maybe longer. Though it’s now a discontinued item. I’ll keep riding it, as long as I can find cartridge bearing replacements. If CK is at full employment, that’s noteworthy. I’ve heard mixed commentary about labor practices at CK, but not enough info to base any opinion on. That being said, it is impressive when I company has taken some of the steps mentioned in this article. The heating cooling system should be part of the code for commercial buildings, nice to see CK took some initiative.

I think I’m in love.

The only bike I’ve needed a new headset for did not deserve a Chris King. When either of my “keepers” needs one, I hope the company is still going strong.

This is an accomplishment. Hoping it leads the way for others to follow suit.

I really wish you’d stop singing the praises of Chris King from the rooftops. The company does not deserve all these puff pieces and its sterling reputation. I worked at this company and it doesn’t pay their employees a living wage, it’s covered up numerous sexual harassment incidents to protect higher-ups, and as stated above it is grossly anti-union. Chris King makes good bicycle parts, but it does not treat its employees well.

Thanks for the feedback Jeff.

Is BP “the rooftop”? And if so – where else should JM post stories when they pertain about CK in a positive light? Or should BP only be used as a platform for posting bad stories about CK?

I have CK components on all my bikes and I also worked there for a few years. I was in my early twenties, didn’t own a car, and lived with roommates; I now refer to it as my lifestyle job way back when. I loved working there but had to leave because I couldn’t survive on $11.30 an hour. I now make three times that, have insurance (which I did then as well, paid), and paying into a pension. Oh, and I’m also part of a union! I noticed the happiest people there were ones with spouses who had good paying jobs and therefore made up for their low pay. I’m also aware of one particular sexual harassment issue that took place shortly after I left.

Love this company. I still have a 20 year old Klein Adroit still rolling a set of CK hubs.

Middle of the Road Guy
Reply to  Toby Keith

One of my biggest cycling regrets is not keeping my old Kleins.

Yeah, we need to get rid of all the unions.
The middle class is barely hanging on, might as well end it for good.
Same with a minimum wage, just a hassle, doesn’t reward good workers, we just would not have one.
This countries inequality is off the charts, by all means, lets just make it worse.

Did I miss that part of the story? Is CK against all unions and minimum wage?

Pretty sure he was replying to the guy who said unions hurt productivity.